Climate Mitigation Policy in China: The Multiple Attractions of Carbon or Coal Taxes1

1. Methodology. Parry and others (forthcoming) develop a practical spreadsheet model for evaluating a wide range of national-level fiscal and regulatory policy options for reducing energy-related CO2 emissions in China. The model begins with energy flow data for China from the International Energy Agency (IEA) and projects this forward to 2030 using assumptions about GDP growth, trends in the energy intensity of GDP, future fuel prices, and exogenous technological change. The impacts of different policies hinge on behavioral response assumptions, such as for fuel use and energy efficiency, in different sectors, which are based on surveys of empirical evidence. Local air pollution deaths from fuel combustion are based on previous IMF estimates for China (Parry, Heine, Li, and Lis, 2014). Incidence analysis is conducted by linking the policy-induced impacts on energy prices from the spreadsheet tool to an input-output model to trace through price impacts on different industries and consumer goods, and combining that with survey data on spending for energy and other products by different household groups.

3. Administration. The best way to administer the tax would be to levy it upstream at the point of entry in the economy (for example, at the mine mouth for coal, building off existing administrative structures for China's Resource tax,6 and for petroleum products at the refinery or gas processing plants, while imported fuel would be taxed at the border). There are currently in China about 11,000 coal mines (though restructuring will likely close around 4,000 of them over the next few years) and far fewer petroleum refineries and gas processing plants. This would contrast, by orders of magnitude, with the number of transactions the tax administration would have to monitor to collect a carbon tax downstream. Alternatively, the tax could be levied on large emitters, but—besides missing about half the CO2 emissions—measuring emissions is technically more challenging than measuring carbon content of fuel combustion, requiring a high level of technical expertise typically not found in tax administrations.7

4. Incidence across households. The analysis also reveals that a carbon or coal tax imposes a disproportionately large burden on low income households—50 and 25 percent larger relative to their consumption for the first and second income deciles respectively, compared with the tenth (top) income decile. Recycling about 5 percent of the tax revenues can, however, offset adverse impacts on the bottom two deciles, for example, through reduced social security contributions and increased welfare and social spending (areas where China has been lagging relative to advanced and other middle income countries).8 An ETS with auctioned allowances is somewhat more regressive than carbon and coal taxes, and dramatically more regressive if allowances are freely allocated (with rents accruing to owners of capital).

5. Incidence across firms. A carbon or coal tax imposes a relatively large cost in industries most closely associated with traditional growth engines (e.g., heavy manufacturing, construction), though exporting sectors do not bear a disproportionate share of the tax burden compared with other sectors. While costs would increase in comparison to producers in other countries without carbon pricing, the analysis suggest that mitigating fiscal measures to provide some support would not be overly costly—around 10 percent of revenues collected through the carbon or coal tax would be sufficient to compensate the most energy-intensive and trade-exposed industries (assuming no mitigation actions in other countries).

6. A carbon or coal tax can effectively address domestic environmental challenges, thereby promoting a more sustainable growth path. Given that sectors most dependent on coal and energy are heavy industries associated with the 'old growth' model, these taxes will support China's effort to rebalance its economy towards high value-added services and consumption-led growth. Moreover, by contributing to coordinated efforts from the international community to slow global warming, these taxes will also reduce the negative impacts climate change will have in China, such as higher occurrence of natural disasters to which coastal areas are particularly vulnerable.9 Although the government is committed to introducing an ETS in 2017, this should not preclude the simultaneous introduction of an upstream carbon or coal tax. This could be facilitated by providing some tax rebates for firms required to obtain emissions allowances to ensure all emitters pay the same unit price of carbon. Given the very large domestic benefits from these policies, China can move ahead unilaterally on its pledges for Paris and make itself better off, without waiting for others to act.

The carbon tax should be introduced progressively with rates announced in advance so firms and consumers have time to adapt and undertake mitigation investments (e.g., wind and solar plants, more efficient buildings).

The ETS will cover electricity, domestic aviation, iron and steel, chemicals, cement, paper and other sectors.

That is, adding a specific component with rates determined based on quantities of carbon to the ad valorem structure recently introduced. Alternatively, the tax could be set on coal processing plants which are far fewer in number than coal plants.

World Bank and Development Research Center of the State Council (2013).

Environmental Reform: The Huge Benefits from Taxing Carbon or Coal 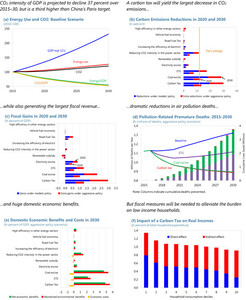