Rebalancing in China: Analytics and Prospects1

A. Definition of Rebalancing

1. Rebalancing in China contains four important elements: external, internal, environmental, and distributional. While external rebalancing focuses on the role of external demand versus domestic demand, internal rebalancing has a much richer content: shifting from investment to consumption on the demand side, transitioning from industry to services on the supply side, reducing credit intensity of output, and improving the efficiency of resource allocation. They are closely interlinked and often reinforce each other. Environmental rebalancing aims to reduce the carbon intensity of output and make growth more environment-friendly. Income distribution rebalancing aims to create a more equal society by increasing the share of labor income in GDP and reducing income inequality.

B. Progress on Rebalancing

2. External rebalancing has advanced well, but at the cost of growing internal demand imbalances until 2011. After the Global Financial Crisis, substantial progress has been made on external rebalancing. China's current account surplus has come down from the peak of 10 percent of GDP in 2007 to around 2–3 percent in recent years, and the contribution of net exports to growth has been fluctuating around zero (from 2 percentage points of GDP annually in the pre-GFC peak). Nonetheless, the narrower external imbalance has come at the cost of growing internal imbalances, with the investment ratio surging to 45 percent of GDP by 2011 (from about 38 percent in the pre-GFC years).

3. Progress on internal rebalancing has been moderate on the demand side… Since 2012, demand side rebalancing from investment to consumption has advanced, with a notable acceleration in 2015 and 2016:Q1 (consumption contributing two thirds of overall growth). Nonetheless, China remains a global outlier in its demand structure, with its investment ratio elevated at 43 percent of GDP, while private consumption accounts for only 38 percent of GDP.

4. …while lagging on the credit side. High investment, together with credit misallocation, has led to falling efficiency: the credit intensity of output doubled compared to the pre-GFC period and has continued to rise. Credit misallocation has, to a large extent, been driven by financing of nonviable firms, especially state-owned firms in overcapacity sectors, such as construction and steel. Since 2016, there have been early signs of improving credit structure, with a shift of lending from overcapacity sectors to the “new economy,” but overall credit misallocation remains significant.

5. Supply side rebalancing has, however, made more substantial progress. Similar to the experience of other advanced economies, China started to de-industrialize at an income level of about US$9,000 (in 1990 international prices), with the output share of the industrial sector peaking in 2011. Since 2012, the nominal share of industry has been on a steady decline, and the pace of decline has been similar to the historical experience of advanced economies. The falling nominal share reflects to a large extent the price effect so far, as the decline in the real share has been much more muted. This is also in line with international experience, as relative price change is an essential part of deindustrialization, especially at the beginning. Resource reallocation will typically accelerate after these price movements. Another indicator for real adjustment is the industrial employment share, which peaked in 2012 and has been on a steady decline since then.

6. Rebalancing on environment and inequality are lagging. Some progress has been made in reducing the energy and carbon emission intensity of GDP, however, PM 2.5 indexes (fine particle air pollution) in cities remains very high. Rapid growth has been accompanied by growing income inequality, with the Gini index2 rising from 0.3 in the 1980s to 0.53 in 2013. Progress has been made in recent years, with labor income gaining a larger share in GDP, but the redistributive role of fiscal policy remains limited as shown in the small difference between gross and net Gini index.

Staff's baseline envisages substantial progress in pro-consumption and services reform, but a lack of decisive SOE reforms and slow progress on hardening budget constraints. This will give rise to continued internal rebalancing on the demand and supply side, but less on credit side. The improvement in external balancing is likely to continue.

7. The household saving rate is projected to fall, reflecting demographic changes and pro-consumption reforms. China will experience rapid ageing in the next 15 years, with the old-age dependence ratio forecast to double from its current level by 2030. Cross-country evidence suggests such demographic change would significantly reduce the saving rate. In addition, precautionary saving is expected to fall with the strengthening of the social safety net, achieved through higher government spending on health care (rising from current 1.5 percent of GDP to 2.1 percent by 2021). As a result, household saving is expected to fall from 24 to about 20½ percent of GDP by 2021. Recently, the government has lifted the one-child policy, which may induce the saving rate to fall faster than staff projections, depending on the effect on the fertility rate.

8. The investment ratio is expected to fall broadly in line with national saving, with external rebalancing becoming more entrenched. Gross fixed asset formation in GDP is projected to fall gradually to 40 percent of GDP by 2021. The fall in investment will reflect both moderating private investment, as returns diminish in a slowing economy, and less excess in public investment. With the commensurate fall in investment and national saving, the current account surplus is projected to remain low, and decline further to less than 1 percent of GDP in the medium term.

9. Consumption's share of GDP is expected to increase with rising labor income share and falling household savings. Private consumption's share of GDP is projected to rise from around 38 percent in 2015 to 43 percent in 2021. The increase will come from rising labor income share in GDP (linked to the transition from industry to relatively more labor-intensive services) as well as declining household saving out of disposable income.

10. Credit intensity, although expected to fall, will remain high in the medium term; as a result, the private debt-to-GDP ratio continues to rise. Credit intensity is forecast to fall modestly, owing to lower investment ratio and some improvement in efficiency, but remains high in the medium term, reflecting moderate SOE reforms and slow progress in hardening budget constraints and loan write-offs. By 2021, the private credit to GDP ratio (excluding LGFVs) is expected to approach 200 percent, up from about 160 percent in 2015.

11. Services will become a more important pillar of the economy. The nominal share of services in GDP is projected to rise from current 50 percent to 55 percent by 2021. This will be achieved through both a price effect (higher service deflator than industrial deflator, reflecting the productivity growth differential) and in real terms and employment. By 2021, the share of service employment is forecast to rise to 51 percent, continuing the trend of net job creation in services seen in recent years.

12. The changing economic structure will facilitate enviromental and income distribution rebalancing, but proactive, supporting policies are also needed. While the changing economic structure will naturally bring down the carbon intensity of GDP, China still needs more proactive policy measures, such as a carbon or coal tax, to reach the target set at the 2015 Paris climate summit. Similarly, a more service-oriented economy will give rise to a higher share of labor income in GDP, but requires further service sector deregulation to facilitate entry of new firms and job creation. A more redistributive fiscal policy will also be necessary to bring down income inequality, and provide more equal opportunities to both urban and rural households.

13. Successful rebalancing requires coordinated progress on various fronts. Going too fast in one area and slow in others may derail the process, in particular: (1) asynchronous adjustment in savings and investment (rapid decline in investment with still high savings will simply shift China's imbalance abroad, while continued excessive investment despite falling saving would eventually lead to dependence on foreign financing and greater exposure to global financial volatility); (2) premature deindustrialization (de-industrializing too fast may lead to a significant growth slowdown and stall income convergence); (3) continued debt overhang (lack of progress on credit rebalancing would significantly raise the probability of a disruptive adjustment, especially when buffers to absorb financial shocks erode with lower national savings over time).

These summary notes provide background documentation for the 2016 Article IV consultation with China. Many are based on longer research papers that are expected to be published over the next few months. 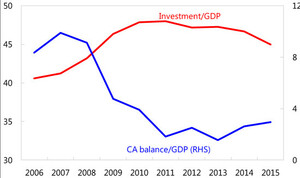 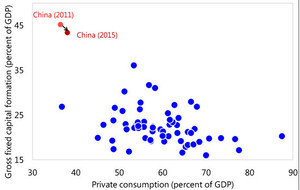 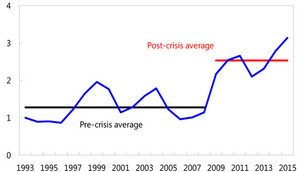 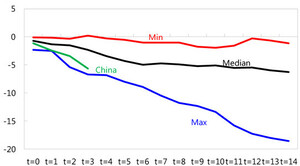 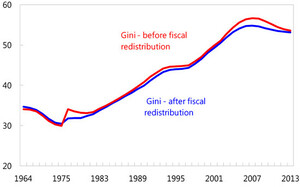 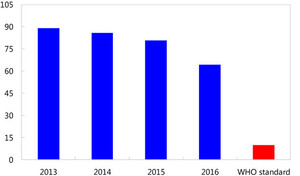 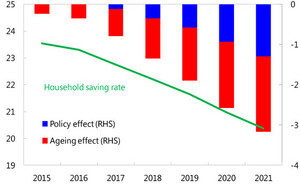 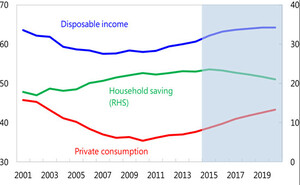