Japan is likely to have become less Ricardian and may continue to do so in the future. First, the discount wedge seems to have risen, suggesting that consumers have become more myopic. Second, some evidence implies the possibility that more households are now liquidity constrained. If sustained, the impact of fiscal consolidation will gradually rise in the future. Together with increasing challenges to fund the government’s financing needs domestically, this calls for starting fiscal adjustment soon in a gradual, yet steady, manner.

Fiscal policy is in the spotlight globally. As monetary policy in many advanced economies has been constrained by the zero lower bound and overextended to boost growth and inflation with unconventional measures, fiscal policy has re-emerged as a counter-cyclical policy tool since the global financial crisis. At the same time, many advanced economies face a formidable consolidation challenge. Japan is a prime example.

Japan needs near-term demand support, while securing long-term fiscal sustainability. As fiscal risks are mostly of a medium-term nature, Japan should have a supportive fiscal stance in the short run to help achieve the inflation goal and ensure that structural reforms do not create deflationary pressures. Indeed, the government delayed the consumption tax hike planned for April 2017 and announced its intention to formulate a “comprehensive and bold” economic package. Over the medium term, on the other hand, given Japan’s unprecedented level of public debt, Japan needs a sizeable fiscal adjustment in the face of low and declining potential growth.

The extent of Ricardian equivalence has important implications for fiscal policy, including for the effectiveness of stimulus and the pace and timing of fiscal adjustment. Specifically, more Ricardian consumers reduces the effectiveness of fiscal policy in stimulating demand. Likewise, as households save for tax increases required to finance repayment of debt in the future, it mitigates the contractionary impact of consolidation. The degree of Ricardian equivalence varies between countries, depending on the share of liquidity-constrained consumers and the fiscal situation: a high level of debt or deficits could make a country more Ricardian (Bhattacharya, 1999; Walker, 2002). Similarly, there is no reason to believe that Ricardian equivalence remains constant over time within a country as fiscal and economic variables change.

Indeed, observers have pointed to the simultaneous increase in household’s financial assets and public debt as evidence that Japanese consumers are Ricardian. However, this ignores the movements in non-financial assets: the total asset-to-GDP ratio of the household sector has been stable after the bursting of the bubble despite a rapid increase in the total financial liability of the general government. Hence, the co-movement between rising household financial assets and government debt may just reflect life-cycle saving and consumption patterns amid rapid ageing. Indeed, household assets managed by pension funds and insurers have been increasing since 1980.

B. Myopia and Liquidity Constraints

Japan may have become more myopic. The estimation result of a restricted model with myopic consumers based on Bayoumi and Sgherri (2006) shows that the discount wedge in Japan is around 0.1 over the full sample period (1980-2014).2 Rolling estimates with windows of 20 years suggest that the additional discount rate has increased over time. In addition, the results suggest that the impact of changes in the personal income tax rate (net of transfers) on changes in consumption may have increased (the average elasticity is 0.15 and 0.22 for the first and last 5 windows, respectively): i.e., the tax multiplier may have increased. The higher discount wedge means that Japan has become more myopic and thus less Ricardian.

Rapid population ageing may have made, and will continue to make, Japan shorter-sighted as a nation. In Japan, life expectancy minus the median age, which can be regarded as an indicator of patience or the planning horizon of a nation as a whole, has been rapidly declining in the past few decades. This results from the more rapid rise in the median age than the average lifespan. In contrast, the US has seen a flattening of this indicator in recent years, which could partly explain the difference between the two countries in terms of the movement of the discount wedge.3 Moreover, the difference between life expectancy and the median age is projected to narrow further in Japan.

Studies of past cash transfer programs suggest that liquidity constraints are somewhat binding in Japan. First, Hori et al. (2002) examine the impact of the shopping coupon program in 1999 and find that the marginal propensity to consume (MPC) was larger for households who are regarded as liquidity constrained. Second, the Cabinet Office (CAO, 2012) analyzes the cash benefit program in 2009 and finds that the MPC was 0.25 for the whole sample, but it was higher for households who are more likely to be liquidity constrained: 0.40 for those with children and 0.37 for the elderly.

Other evidence suggests that liquidity constraints in Japan have become more binding for both the young and the old. First, especially for the young male, there has been a notable increase in non-regular workers. More workers with lower wages and less job security imply a larger number of people subject to liquidity constraints. This is in line with the findings of the CAO (2015) that younger households with lower income reduced consumption after the 2014 consumption tax hike more than other types of households. Per person financial assets have also declined for younger generations. Second, a larger number of retirees could imply more liquidity constrained households as pension benefits in Japan, on average, are not as generous as those in European counterparts. Indeed, inequality among the elderly is known to be larger compared to other cohorts. Moreover, pension benefits per person have been cut in nominal and real terms recently.

The record-high number of people on public assistance provides further evidence for rising liquidity constraints. The number of people on the public assistance program, the final safety net in Japan, rose from less than a million to an all-time high of 2.2 million in the past twenty years. This trend is well explained empirically by ageing, the share of non-regular workers, and the job-to-applicant ratio, with the first two exerting a positive impact and the latter a negative effect. Given further ageing, even if the non-regular worker ratio would flatten in the future, the number of people on the public assistance program is estimated to increase by an additional 0.3 million by FY2030. This means that more households will become liquidity constrained, making Japan even less Ricardian.

A smaller Ricardian offset suggests a higher multiplier of fiscal policy. Using the IMF’s Global Integrated Monetary and Fiscal Model (GIMF), the consumption tax multiplier is estimated at around 0.4, with the default value of a planning horizon for advanced economies including Japan at 20 years. If we use a shorter planning horizon of 10 years, which is more in line with the discount wedge of 10 percent estimated above, the multiplier becomes larger at around 0.6.

Becoming less Ricardian also means less household savings, the most important source of JGB financing. Expanding on Tokuoka (2010) and Hoshi and Ito (2012), we project future demand and supply of JGBs. An illustrative calculation, assuming that the BoJ halts its purchases of JGBs at end 2017, suggests that the supply exceeds the demand as early as 2018. At that moment, interest rates may need to rise to attract enough buyers, including domestic financial institutions which hold excess reserves at the BoJ’s current account (the white dotted area in the text chart). In addition, private pension funds and other insurers may reverse their portfolio rebalancing towards riskier assets. However, in the long run, the savings rate is expected to decline further due to ageing, more myopic behavior, and rising liquidity constraints, resulting in a slower increase or decline in household’s financial assets. This will pose a challenge for JGB financing.

All considered, Japan has, and possibly will, become less Ricardian with ageing and weak economic prospects. The estimate of the discount wedge suggests that Japan may have become more myopic. It appears natural that Japan becomes shorter-sighted as the average remaining life expectancy of the population declines. In addition, the number of liquidity constrained households is increasing.

The difference between a discount rate people face and the market rate.

Bayoumi and Sgherri (2009) find that the discount wedge in the US had been on a declining trend.

Public Debt Financing in the Baseline 1/

(In trillion yen; end of period) 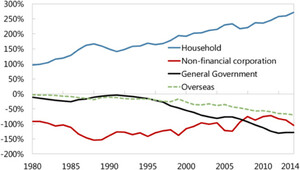 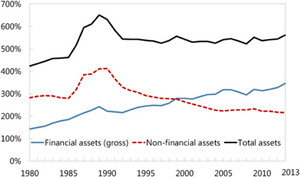 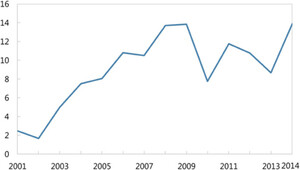 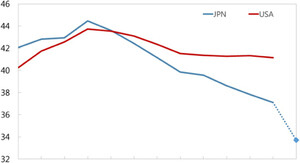 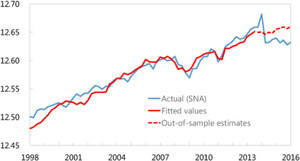 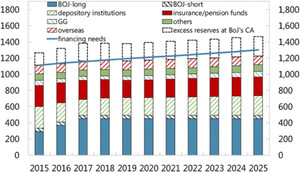