Japan’s labor market tightened considerably based on standard metrics. Still wage growth is only gradually picking up. A combination of cyclical and structural factors seem to be at play: a) residual slack in the economy—mainly due to a weak recovery in the manufacturing sector—is putting downward pressure on wages as employment is concentrated in the less productive services sectors and dominated by part-time employees; b) a trend increase in female labor force participation and the reversal of the cyclical decline in participation after the crisis could be dampening wage growth; c) structural characteristics of the Japanese labor market—the low horizontal mobility of regular workers, an industrial relations system emphasizing employment stability over wage increases, and limited wage bargaining power—tend to reduce wage pressures even in the face of a tight labor market. The labor market is projected to tighten further in the medium-term but weak demand prospects, coupled with a sluggish outlook for the manufacturing sector will continue to dampen wage growth in the near term.

Japan’s labor market has tightened considerably in recent years based on a range of standard metrics. The unemployment rate has declined among all age groups and types of unemployed (e.g., long-term unemployed, involuntarily unemployed). At 3.3 percent it is below its pre-global financial crisis (GFC) trough of 3.7 percent. Alternative measures of labor underutilization taking into account discouraged workers, workers who are marginally attached to the labor force and part-time employment due to economic reasons all confirm a significant reduction in labor market slack.2 Furthermore, long-term unemployed and part-time engaged for economic reasons showed a cyclical increase during the GFC.3 Other indicators such as vacancy rates, the job applicant-to-openings ratio, and survey-based measures all indicate a considerable tightening in the labor market (Figure 1). Nonetheless, wages have remained sluggish, complicating efforts to durably exit from deflation and achieve stronger private-sector led growth.

Increasing tightness in the labor market coincided with the narrowing of the output gap, but there remains residual slack in the economy reflecting a slower recovery in the manufacturing sector. Although estimates of the output gap are highly uncertain, a range of estimates indicates it is still mildly negative, or at least not positive. Employment has recently reached its pre-crisis level, but its composition has shifted towards part-time workers, which accounts for the considerable decline in total hours worked. A low sensitivity of employment indicators to the cyclical position as well as labor market rigidities and mismatches could help explain the observed tightness in the labor market amid overall slack in the economy:

B. The Rise of Non-Regular Employment

Hourly wages have stagnated since the GFC, rising only gradually over the past couple of years. While some sectors continued to have positive wage growth (e.g., manufacturing, construction, wholesale and retail trade, communication), others stagnated (medical and health care, finance). Wages of part-time employees have fared better during the GFC, which probably reflects the limited scope to reduce wages given the already low levels of compensation for part-time workers and a lower share of variable compensation in total compensation (for example in the form of bonuses). More recently, the pick-up in wage growth has been more visible in sectors facing higher labor shortages (construction, accommodation and eating) and sectors with higher labor productivity (scientific research, manufacturing). Part-time workers have enjoyed higher wage growth since 2013 (increasing by 1.2 percent since end-2013, compared to a 0.3 percent increase for full-time employees), which probably reflects the rising demand for part-time workers and the stronger cyclical pick-up in the services sector (Figure 3).

Composition effects (manufacturing versus services) are dampening wage growth, with the rising share of part-time workers playing a central role:

Consistent with the findings in Sommer (2009) and Steinberg and Nakane (2011), updated estimates of the impact of the aging of working adults using a constant age-earnings profile suggest no negative impact given that the increase in older workers with lower wages is offset by an increase in workers in their peak-earning years and a decline in young workers with similarly low earnings.

Lack of strong wage pressures could reflect residual slack in the labor market, associated with a rise in labor force participation. In particular:

Structural characteristics of the Japanese labor market tend to dampen wage growth even in the face of a tight labor market. These include:

Low actual and expected inflation have contributed to stagnant nominal wages. An entrenched deflationary mindset and backward-looking inflation expectations are generating weak nominal wage growth. Unions and employees look at past headline inflation in their negotiations, rather than setting wages in anticipation of higher future prices. Public wage setting takes the same approach following developments in the private sector rather than leading in line with the authorities’ inflation targets.

Japan’s labor market has tightened considerably, but wage growth remains subdued. A combination of cyclical and structural factors seem to be at play, including a weak recovery in the manufacturing sector, a shift towards the less productive services sectors, a rising share of part-time employees, a trend increase in female labor force participation, as well as structural characteristics of the Japanese labor market—the low horizontal mobility of regular workers, an industrial relations system emphasizing employment stability over wage increases, and limited wage bargaining power. Although, the labor market is projected to tighten further in the medium-term, without addressing these bottlenecks, wage-price dynamics will only very gradually strengthen.

Japan’s wage setting mechanism, the so-called Shunto, is an annual synchronized wage negotiation exercise. Although wages are formally determined by negotiations between individual companies and their enterprise unions, there is a strong demonstration effect from a handful of firms in major industries (e.g., automobiles and electronics), affecting the entire economy.

The Shunto system was developed in the 1950s to boost the bargaining power of unions through industry-wide simultaneous negotiations, but its influence has been waning in recent years. With the rise of the share of non-regular workers and reduced reliance on seniority-based wage increases, the influence of Shunto negotiations has been decreasing. Nominal overall wage growth was negative in most years from the late 1990s, despite Shunto wage growth remaining constant at about 2 percent (chart). Many workers in companies not directly included in the Shunto received less than what agreed in the negotiations. The 2015 Shunto resulted in average wage growth of 2.2 percent for large enterprises and 1.9 percent for SMEs, compared to the union request for a hike of 3.7 percent. The early results of the 2016 Shunto suggest weaker base pay hikes relative to last year.

The government has become involved directly in discussions on wages with employers and trade unions through the Tripartite Commission (TC). Through the TC, the government has been exerting “moral suasion”, by explicitly asking profit-making companies to increase wages. While this strategy has probably contributed to the positive nominal wage growth observed recently, it is not delivering the substantial wage growth which Japan needs to get out of deflation.

Under the current institutional arrangements, the government has limited room in influencing average wage growth through public worker wage increases, since the latter follow those in the private sector. Every year, the National Personnel Authority (NPA) publishes a recommendation for public wage hikes, which is expected to ensure appropriate remuneration of public employees in accordance with general social conditions. In practice, the recommendation implies that wage developments in the public sector follow those in the private sector.

In November 2015, the Abe administration called for raising the minimum wage by 3 percent per year, as part of its efforts to increase the nominal GDP to JPY 600 trillion (see also Chapter 3). Japan has a minimum wage system which, although set at the prefectural level, can be significantly influenced by the central government. The Central Minimum Wage Council, an advisory body for the Ministry of Health, Labor and Welfare, makes recommendations on prefectural minimum wage increases. Based on the panel’s recommendations and taking local conditions into consideration, local councils decide on the actual minimum wage level for each prefecture. Although the recommendation by the central council is not legally binding, in practice it provides a lower bound. The announced intention to raise the minimum wage by 3 percent per year, which will result in a hike from JPY 798 per hour to over JPY 1,000 by fiscal year 2023, seems an ambitious target in a historical perspective (see chart). Staff estimates suggest that increasing the minimum wage can help boost average wage growth: a 1 percent increase in minimum wage growth is estimated to increase average wage growth by about ½ percentage points (Aoyagi, Ganelli and Tawk, 2016).

Workers who are marginally attached to the labor force are those who currently are neither working nor looking for work but indicate that they want a job and have looked for work sometime in the past 12 months. Discouraged workers, a subset of the marginally attached, have given a job-market related reason for not currently looking for work. Persons employed part time for economic reasons are those who work less than 35 hours per week and want to work more hours.

Naganuma and Uno (2016) find that long-term unemployed (unemployed for more than one-year) do not have a significant effect on nominal wages in Japan.

Steinberg and Nakane (2011) find that the response of unemployment to output is asymmetric and depends on the position in the cycle, with a larger response in downturns (a coefficient of 0.24) than in recoveries (a coefficient of 0.12). See Balakrishnan, Das, and Kannan (2010) for G7 estimates.

One approach following Hara et. al. (2006) is to calculate “structural” unemployment over time using the position of unemployment and the vacancy rate at any point in time relative to the 45-degree line and assuming a similar slope as observed during 1988-1993 to compute the level of structural unemployment. To control for the impact of demographic changes on the unemployment rate over time, we conduct this exercise using a demographics-adjusted unemployment rate constructed by holding the age-composition labor force constant over time (at 1990 levels).

Figures show the impact of the changing age composition of the labor force, holding the level of age-specific LFPRs constant at their 2007 level, and projecting aggregate LFPR based on actual population dynamics.

Kawata and Naganuma (2010) note that there were both “discouraged worker” and “household assistance” effects in Japan’s LFPR behavior after the GFC.

The estimates use prefectural data to exploit heterogeneity in cyclical conditions. The degree of cyclical downturn is proxied using the percentage change in employment during 2007–09 which was regressed on the change in LFPR during 2007–15, controlling for prefecture-level changes in the population’s age composition.

Recent work on the employment of older workers in Japan suggests that there is scope to further raise the labor force participation of this group (Ganelli and Miake (2016)). 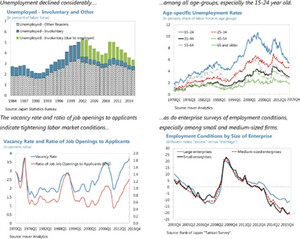 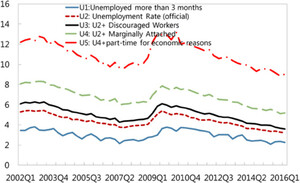 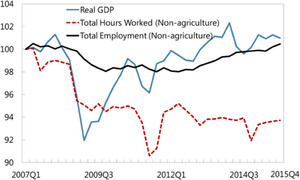 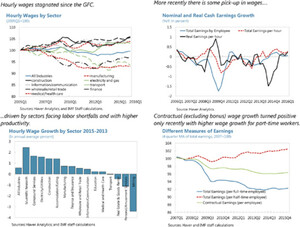 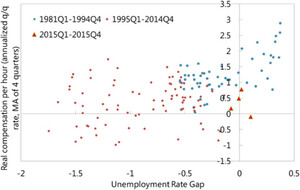 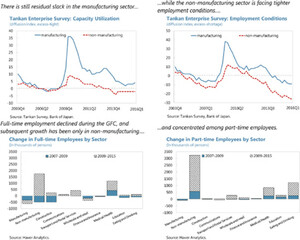 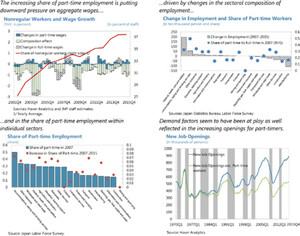 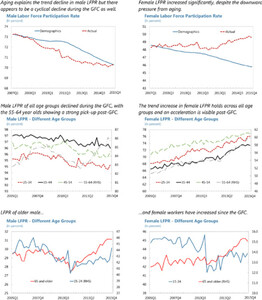 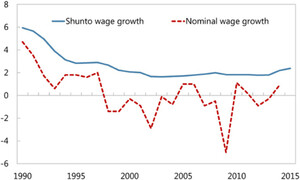 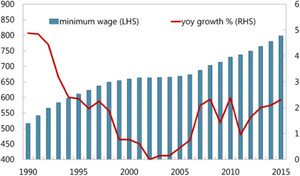