A. Context and Motivation

1. Despite the strengthening recovery, the medium-term outlook for the euro area remains subdued. Growth is forecast at only a little over 1½ percent for the next five years and inflation at just 1.7 percent in 2021, with public debt and unemployment remaining at high levels for some time. Current accounts have improved for many countries, but external imbalances within the euro area remain sizeable and the growing surpluses of the large creditor countries are contributing to global imbalances. Slow progress in addressing crisis legacies combined with low inflation and growth leave the euro area vulnerable to shocks and risk of stagnation. The policy mix so far has relied heavily on monetary easing while policy buffers at the country level are limited, reflecting the large buildup of public debt in some countries.

3. Objective. This paper uses model-based analysis to examine the potential benefits of a more balanced, comprehensive policy strategy. The paper also considers how such a comprehensive approach could be effective in countering a prolonged stagnation scenario of low growth and inflation.

4. EUROMOD simulations. To examine the possible impact of a more balanced and comprehensive approach, the EUROMOD component of the IMF’s Flexible System of Global Models (FSGM) to illustrate several policy scenarios is used.3 The simulations use the April 2016 World Economic Outlook (WEO) projections through 2021 as a baseline. The analysis focuses on the euro area and the largest euro area members states (Austria, Belgium, Finland, France, Germany, Greece, Ireland, Italy, Spain, the Netherlands, and Portugal), as well as the impact on the rest of the world.4

5. A more balanced and comprehensive strategy would include:

6. The growth and inflation benefits of a more balanced policy strategy are substantial. Real growth for the euro area would increase by an average of more than 0.4 percentage point per year to average 2.0 percent over 2017-21, compared to only a little above 1½ percent in the baseline. Headline inflation would pick up over time and, on average, would be about 0.5 percentage point higher over 2017–21. In 2019 inflation would be slightly below 2 percent—consistent with the ECB’s objective of close to but below 2 percent—compared to a baseline forecast of only 1.7 percent by 2021 (chart).

7. Stronger growth would help output reach potential earlier. While the output gap would turn positive in the baseline only in 2021, implementation of comprehensive policies would more than close the output gap by 2019, when it would reach 0.3 percent (chart). All countries see upward movements, but this means some countries that were near or above zero are pushed farther away from balance, especially Ireland, Germany, and Austria (chart), reflecting in part the distribution of stimulus.

8. Higher growth and inflation would lower debt levels and help rebuild key fiscal buffers. Aggregate euro area public debt in the baseline is forecast to fall from 92½ percent of euro area GDP in 2016 to 83 percent by 2021. With comprehensive policy support, euro area public debt would be 3 percentage points lower by 2021 relative to the baseline, with high debt countries experiencing average declines more than one percentage point larger (charts). Deficits in high debt countries would also be, on average, about 0.4 percent of GDP lower, which would help rebuild policy buffers against future shocks. While this scenario analysis considers only expansionary policies (i.e., largely the use of fiscal space, SGP flexibility, and centralized investment) and finds substantial benefits, further work could examine the tradeoffs involved in combining these stimulus measures with the further fiscal adjustment recommended for high debt countries and whether this policy mix could achieve even faster debt reduction in these cases.

9. More balanced policies would also generate positive external spillovers. Stronger domestic demand would accelerate the fall in the current account already projected in the baseline. The euro area current account surplus would be a little more than 0.3 percent of GDP lower than the baseline by 2021 (chart), bringing the surplus to 2.2 percent. This would have spillover benefits for the rest of the world as seen in higher real exports (0.4 percent) and real output (0.1 percent) in 2021. The spillovers to other EU countries would be especially large due to close trade links.

10. More spending in surplus countries can narrow external imbalances within the euro area. Fiscal stimulus in Germany during 2017–18 contributes to reducing its current account relative to the baseline by much more than in other euro area countries (e.g., 0.5 percent of GDP versus 0.2 percent of GDP for France and 0.1 percent of GDP for Italy as shown in the chart), which would help narrow external imbalances within the euro area. After 2018, however, changes in current account balances relative to the baseline are more similar across countries (chart).

This reflects the winding down of stimulus in Germany and the strengthening of demand in countries with weaker external positions. Structural reforms that raise private spending in surplus countries and improve productivity and the relative competitiveness of net external debtor countries could help narrow external imbalances within the euro area, but these competitiveness gains may take longer to realize, beyond the forecast horizon.

11. Fiscal expansion, although unevenly distributed, has important spillover benefits. Given high debt levels in many euro area economies, only a handful of countries are assumed to use fiscal space (including via SGP flexibility), with the bulk of the stimulus coming from Germany. Although other countries do not undertake direct stimulus, these countries do benefit from positive growth spillovers (chart). A fiscal expansion of 0.2 percent of euro area GDP in 2017 by countries undertaking supportive fiscal policies raises their average GDP level by a little more than 0.1 percent that year, and also raises the GDP level of other countries by an average of 0.04 percent.

12. To sum up, centralized investment plays an important role throughout, fiscal stimulus is fairly powerful when used, and structural reforms are critical to longer-term growth prospects (charts).

15. Under the stagnation scenario, the euro area would experience prolonged low growth and inflation. Compared to investment growth of 2½–3 percent in the baseline, the rate of capital expansion would fall to only ½ percent by 2021, and the level of investment then would be about 6 percent lower than in the baseline. Led by weaker investment, GDP growth would be about 1.1 percent in the medium term, or about 0.4 percentage point lower than the baseline, while inflation would average just 1 percent for 2017–21 (charts). The output gap would widen initially by 0.2 percentage point and be negative 0.7 percent in 2021. Moreover, slower productivity growth and reduced investment over the medium-term would lower potential growth and push up unemployment by 0.4 percentage point in 2021.

17. Lower growth in the euro area would generate negative spillovers for the global economy. By 2021, global output would be 0.4 percentage point lower than under the baseline, and the euro area current account surplus would be 0.5 percent of GDP higher with real imports almost 3 percent lower (chart). Other EU countries’ exports would be particularly affected, while real exports for the rest of the world would be 0.4 percent lower (chart). In addition to reduced trade, lower growth and inflation in the euro area could also have confidence and financial spillover effects for the world.

18. Limits to policies would contribute to negative feedback loops that exacerbate the downturn. The positive policy synergies shown earlier in Figure 1 are thrown into reverse in a downturn (Figure 2). Weaker demand, especially investment, causes inflation to fall, which raises real interest rates and contributes to real exchange rate appreciation. The burden on monetary policy to address tightening financial conditions and lower inflation would increase. With higher real borrowing costs and weaker competitiveness, investment would fall further.

19. A similar strategy of more balanced and comprehensive policies can help address this more severe downturn. Here it is assumed the main components of the policy mix remain the same with two additions:

21. The synergies from combined policies would play an important role in restoring growth and inflation. Similar to the earlier scenario, centralized investment and fiscal policy are key to addressing the immediate aftermath of the shock. As before, without action on structural measures, longer-term growth would suffer, falling back to only a little above that in the stagnation scenario. What stands out in this simulation is the effect of additional monetary policy support. The one-year extension of asset purchases has a large effect on growth in 2018 as well as a sizeable and persistent impact on inflation alongside centralized investment as the other key factor. This is not entirely consistent with recent experience, though substantial monetary easing may have prevented even lower inflation outcomes in recent years.

22. Targeting centralized investment toward countries with larger output gaps enhances the effectiveness of stimulus. Even though the size of the additional centralized investment assumed in the policies to counter stagnation is small (a total of 0.2 percent of euro area GDP over 2017–18), targeting the stimulus toward countries with larger output gaps has a significant impact, raising the cumulative output level by another 0.22 percentage point in 2018 (chart). This implies a multiplier around 16 percent higher than for untargeted centralized investment, underscoring the efficiency of targeted demand support from the center.

23. A more balanced, comprehensive policy strategy can raise growth and inflation significantly in the euro area, with positive spillovers globally. Model simulations show that a strategy encompassing continued monetary accommodation, use of fiscal space and SGP flexibility, centralized investment, cleanup of bank and corporate balance sheets, and structural reforms can significantly raise growth and inflation relative to the baseline, and could effectively counter a prolonged downturn. The strong positive impact reflects important synergies in the current low-inflation, low-interest rate environment. Pursuing a comprehensive strategy would help reduce public debt levels and rebuild fiscal buffers. It would also have positive spillovers for the rest of the world through stronger import demand and inflation in the euro area. Targeting support to weaker countries would enhance the impact, but use of fiscal space by stronger countries still has positive growth spillovers, and could also help narrow internal imbalances within the euro area.

Prepared by James John and Tao Wu with assistance from Jesse Siminitz (all EUR), and in collaboration with Benjamin Hunt and Susanna Mursula (both RES). We appreciate helpful comments from euro area country teams in EUR, and counterparts at the European Commission and ECB.

There is a large literature suggesting that fiscal multiplier tends to be considerably higher in or near a liquidity trap than in normal times, for instance, Eggertsson (2008); Christiano, Eichenbaum, and Rebelo (2011); Woodford (2011), and Belinga and Ngouana (2015).

For Spain, the April 2016 WEO baseline projections do not include the higher-than-expected fiscal deficit in 2015 of 5.1 percent of GDP, implying upward revisions to the path of the fiscal deficit and public debt under current policies.

The interest rate assumptions are in line with market expectations as reflected in the EONIA forward curve while the asset purchase assumption is consistent the ECB Governing Council’s forward guidance, whereby asset purchases of €80 billion per month are expected to continue through the end of March 2017 or until there is a sustained adjustment in the path of inflation consistent with the Governing Council’s price stability objective.

For illustrative purposes, apart from Italy, use of SGP flexibility is assumed for all five of the non-EDP countries covered in EUROMOD, although in practice some of these countries might not meet all of the criteria specified by the European Commission.

The corporate borrowing cost reduction figures are calibrated based on the elasticity of changes in credit risk premiums in each euro area country between August 2014 and June 2015 to the observed write-off rates during the same time period (coinciding with the sample cut-off date of data obtained from the 2015 EBA Transparency Exercise).

The analysis assumes two years before structural reforms are implemented. If, due to political or other factors, it took longer to implement reforms or if they were not fully implemented, the impact would be smaller.

Negative Feedback Loop in a Downturn 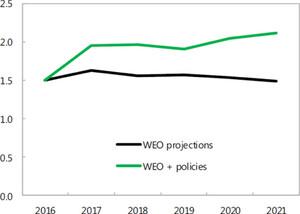 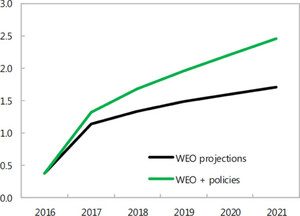 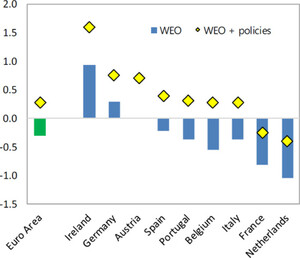 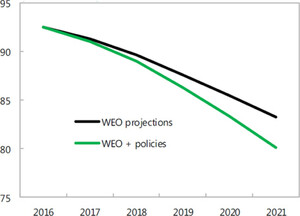 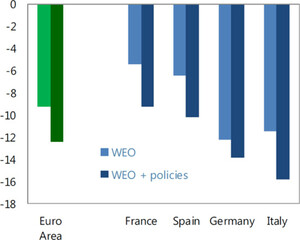 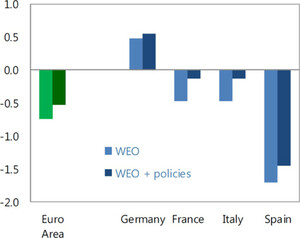 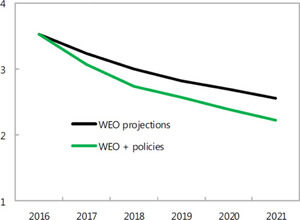 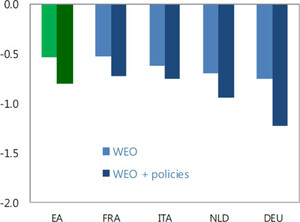 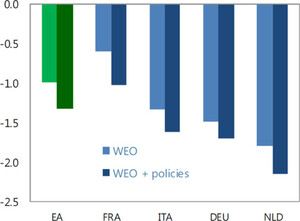 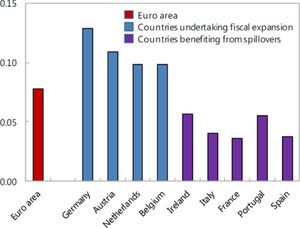 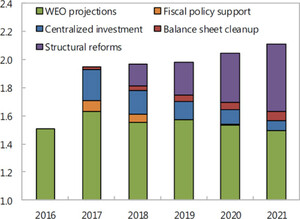 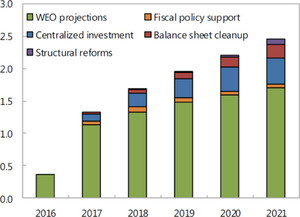 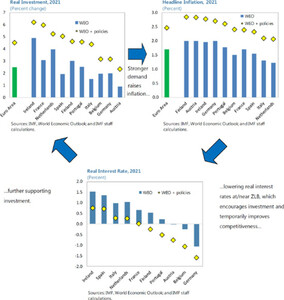 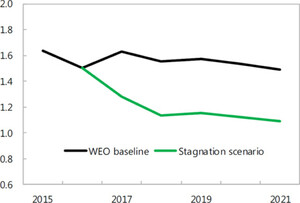 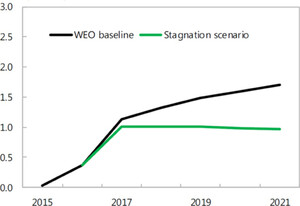 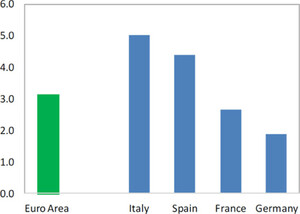 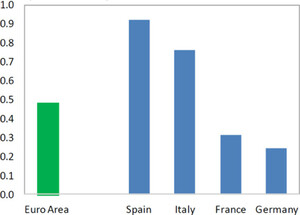 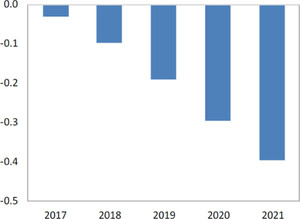 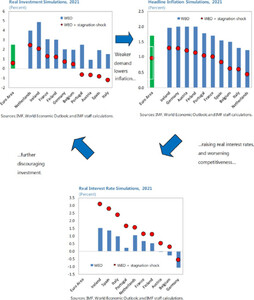 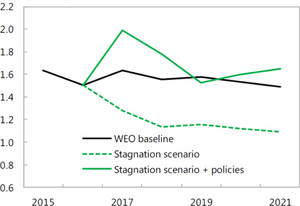 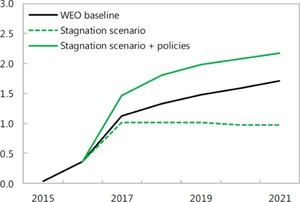 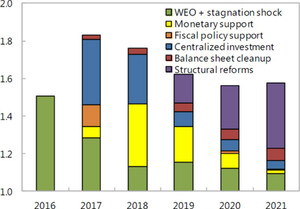 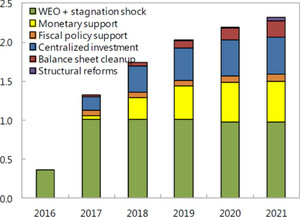 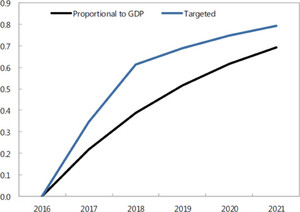