This paper estimates the impact of China’s growth slowdown and the recent large decline in commodity prices on South Africa. It seeks to identify the key channels through which a shock to China’s economy is transmitted to South Africa, as well as the propagation of this shock within the economy. Our findings suggest that China’s growth slowdown is likely to have a significant impact on South Africa’s economy, with commodity prices and global financial conditions the main transmission channels. Sectoral interlinkages are found to play an important amplifying effect, notably through employment, corporate profitability, and wealth effects.

A. Linkages between South Africa and China

2. China’s impact on the South African economy is magnified by China’s role in the global economy and commodity markets.

3. Capital flows into South Africa from China are modest, but financial spillovers are increasing.

B. Assessing the Impact of Lower Growth in China on South Africa

4. A VAR analysis suggests a slowdown in China has a significant impact on South Africa, and exceeds that from other countries. A simple VAR estimated on quarterly real GDP growth in the U.S., the European Union, China, and South Africa from 2000 onwards suggests that a one percentage point decline in China’s real GDP growth would lower South Africa’s growth by 0.3 percentage points after one quarter.2 This is smaller than the impact of a similar shock to the U.S. or E.U. growth and broadly consistent with estimates in other studies including the World Bank’s June 2015 Global Economic Perspectives. However, the impact of a shock to China’s growth rises to 1 percentage point when the sample is restricted to the past five years (2010-15), significantly exceeding that of the U.S. and E.U. This result is consistent with our earlier finding that both trade and financial linkages with China have increased significantly in recent years. The period 2010-2015 also coincided with an increase in the importance of structural bottlenecks in South Africa (e.g. electricity shortages, protracted strikes, etc): to the extent that these structural factors disproportionalty affected exports to China (e.g. strikes in the mining sectors), the VAR may overstate the impact of a slowdown in China. On the other hand, the use of overall GDP—rather than GDP in the secondary sector which is more closely related to the demand for South African export commodities and where the slowdown in sharper, especially in nominal terms—could underestimate the impact of a growth shock in China.3

The results suggest that the decline in South Africa’s export commodity prices resulting from a shock to China’s growth has a large and persistent impact on output growth in South Africa. The importance of this channel (which will be explored in more detail later) is consistent with our earlier discussion which suggests that China plays a major role in determining global demand for South

6. Sectoral interlinkages between the commodity sector and the rest of the economy are significant. We use an input-output (IO) table to identify the industries that are directly or indirectly linked to the mining sector in South Africa.5 The industry with the most important upstream linkages (sectors that are used as intermediate inputs by the mining sector) with the mining sector is transportation. Important downstream linkages (sectors that use output from the mining sector as inputs) include: metal production; petroleum, chemical, and mineral production; and other manufacturing. The mining multiplier calculated from the IO table suggests a R1 million increase in mining output raises output in the overall economy by R1.8 million (i.e. the indirect effect is R0.8 million). This is slightly higher than the mining and quarrying sector multiplier estimated by the South African National Treasury and the Chamber of Mines.6

7. A structural VAR analysis confirms that the impact of commodity price shocks is amplified by sectoral interlinkages.

8. Commodity price shocks are transmitted to the economy mainly through changes in corporate profitability and employment. We use the approach in Bayoumi and Swiston (2008) described above to quantify the relative importance of four potential channels that transmit the impact of a shock to export commodity prices on the economy: the real effective exchange rate (REER), employment, and the growth rates of net wealth and the gross operating surplus in the economy. Our results suggest that the main channels whereby lower export commodity prices spillover to non-mining sector growth include lower economy-wide income resulting from the decline in employment and lower corporate profitability. A decline in net wealth in the household and corporate sectors also plays a role. The REER does not play a substantial role, which is consistent with the slow responsiveness of export volumes to the REER depreciation observed in recent years.

9. China’s growth has been found to have large spillover effects on South Africa, transmitted mainly through commodity prices and global financial conditions, and amplified by sectoral interlinkages. The analysis in this paper suggests that rising trade and financial linkages with China, as well as China’s large role in the global economy and commodity markets, has increased the impact of a growth slowdown in China, which now exceeds that of a growth slowdown in the U.S. and the E.U. Commodity prices and tighter global financial conditions are the main international transmission channels. Domestically, the impact of a fall in commodity export prices is amplified by linkages between the mining and non-mining sectors, and is transmitted to the economy through large falls in mining sector employment, corporate profitability, and wealth effects.

The VAR is estimated on seasonally adjusted annualized quarterly real GDP growth and one lag of the endogenous variables as suggested by different information criteria using data from 2000Q1-2015Q3. The results are derived using generalized impulse response functions (GIRF) proposed by Pesaran and Shin (1998) which are unaffected by the ordering of the variables in the VAR.

Estimation using real GDP in China’s secondary sector is hampered by data limitations and would also complicate a cross-country comparison.

We use the Eora Multi-Region input-output (MRIO) table (25 sectors) together with Statistics South Africa’s IO table (50 sectors) for 2012. A similar IO analysis was used by IMF (2014) to estimate the spillover from an energy boom in Canada to other industries and its broader macroeconomic impact.

The commodity export and import price indices are computed as the growth rate of a weighted average of the prices of 47 commodities (in U.S. dollars) including precious metals. The values of exports and imports in the previous period are used as the weight in constructing the index following Gruss (2014). Growth in South Africa’s main trading partners is captured by trade-weighted real GDP growth in China, the United States, and the European Union. Global financial conditions are proxied by the Chicago Fed’s financial conditions index. The VAR is estimated using one lag of the endogenous variables as suggested by different information criteria on data from 2000Q1-2015Q2.

The overall GDP impact is derived using a simplified VAR where the growth contributions of real mining and non-mining value added are replaced by overall real GDP growth.

Accurately measuring these bottlenecks is not easy, but could be a promising area of future research.

The gross external financial requirement is the sum of the projected current account deficit for the following year (4.1 percent of GDP for 2016) and the external debt coming due within one year (14½ percent of GDP as of September 2015, comprising mainly corporate and bank debt).

The gap averaged 0.3 percentage points since 1998. The current gap is large by historical standards notwithstanding the expect policy rate hikes.

The SARB drains liquidity from the banking system overnight to maintain the overnight rate. This creates a ‘money market shortage’.

The financial cycle is estimated based on credit, and home and equity prices, using the Christiano-Fitzgerald band-pass filter.

The study also showed that nonresident holders of South Africa’s LC bonds are primarily institutional investors. These investors typically take longer to return after a downgrade to sub-IG level. See IMF, (2014), Global Financial Stability Report, April “How Do Changes in the Investor base and financial-deepening affect emerging market economies?”

Change in the Composition of the Johannesburg Stock Exchange

Impact of Growth Shock in the US, EU, and China on South Africa

Intersectoral Linkages with the Commodity Sector

Impact of a Shock to Export Commodity Prices: Spillover Channels 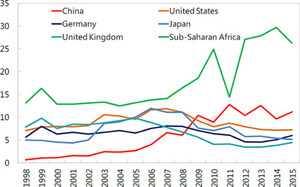 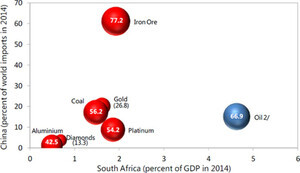 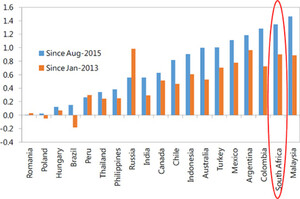 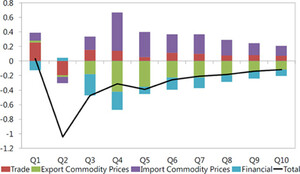 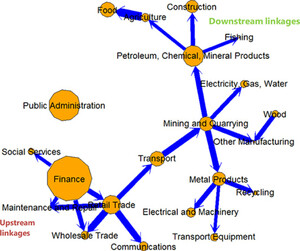 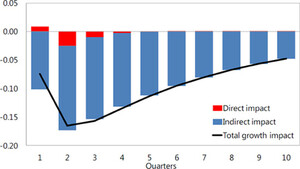