Tourism Competitiveness in São Tomé and Príncipe: Challenges and Strategy1

1. São Tomé and Príncipe has experienced significantly faster growth in tourism than most tourism dependent small states (TDSS). Growth in tourist arrivals since 1995 averaged 7.5 percent annually, and, by 2009, had more than doubled (Figure 1, left chart). The crisis in Europe, home of the vast majority of tourists to São Tomé and Príncipe, led to a significant cutback in the number of arrivals in 2010. However there was already a rebound in 2011, stronger than the case with other TDSS (Figure 1, right chart).

2. An application of a tourism gravity model shows that São Tomé and Príncipe is competitive compared to TDSS. While comparing rates of growth and changes in global shares provides some insight into the country’s tourism performance over time, comparing the level of tourist arrivals must take into account that tourism flows to each destination are subject to many mitigating and inhibiting factors. An index calculated as the value of the country dummy in a fixed effects regression with bilateral arrivals as explanatory variable and controlling for the fundamental determinants of bilateral tourism flows (i.e. GDPs of the origin and destination countries, their populations, areas, distances, price levels, geographical characteristics, common culture and history) provides a more reliable measure of competitiveness. A ranking by the index shows that São Tomé and Príncipe’s tourism competitiveness during 1999–2009 was above that of an average TDSS (Figure 2).

3. The results of the tourism gravity model also shed light on São Tomé and Príncipe’s competitiveness in different tourism markets. Figure 3, left chart, plots the residuals (actual minus predicted arrival values) for São Tomé and Príncipe’s selected origin markets from a gravity model regression with fixed origin and destination effects. It shows that—after controlling for the fundamental determinants of bilateral tourism flows—São Tomé and Príncipe’s has been doing unusually well in the Portuguese and Angolan markets, highlighting the significance of regular direct flight connections. Interestingly, although Nigeria and Angola are within close proximity to São Tomé and Príncipe, the number of Nigerian tourists is less than the model’s predictions. Also underperforming is the Brazilian market that akin to Portugal and Angola shares common linguistic, historical and cultural ties with São Tomé and Príncipe. On the flip side, the underperformance in Germany and Nigeria helps to explain the rapid growth registered on those markets since 2007 onwards (Figure 3, right chart)—reflecting the “catch up effect” to its potential. However, growth was not limited to previously underperforming markets, as tourist arrivals from markets in which São Tomé and Príncipe already over performed in 2008 grew by 32 to 68 percent in the six years since then (Portugal and Angola). The catching up effect has not kicked in yet in the underperforming French and Brazilian markets as well as in other markets in the top five major origins (the United States, UK, Spain, Gabon and Cabo Verde), suggesting untapped potential for faster future growth.

B. Challenges and Strategy

Tourism development in São Tomé and Príncipe faces two broad challenges: On the micro level, it must overcome competitiveness- related structural bottlenecks in order to make tourism a driver of the private sector led and inclusive growth. On the macro front, tourism must have a balanced development to act as a buffer against external vulnerability.

4. The current tourism model has been built around a handful of beach resorts and smaller boutique hotels capitalizing on São Tomé and Príncipe’s main value proposition, namely tropical and unspoiled landscapes in a safe and secure environment. While this model has driven growth in the tourism sector in the recent decade and a half, evidence points to a large untapped potential that would require a re-tweak of the current model. Going forward, sustainable development of tourism in São Tomé and Príncipe will depend critically on the government’s vision for the sector and on actions in the following key areas aimed at enhancing the enabling environment and investing in the supporting infrastructure:

5. Tourism is a key source of vulnerability to external developments in São Tomé and Príncipe. Tourism currently makes important contributions to the GDP, employment and exports. The overall impact of tourism in 2015, including indirect and induced contributions, was estimated at 14 percent of GDP, 13 percent of the overall employment and two-thirds of exports of goods and service. To quantify the impact of the potential slowdown, one requires estimates of the elasticity of tourist arrivals to GDP in tourist-originating countries. Using first differences regression, Culiuc (2014) estimates the global elasticity of tourist arrivals at around 1.3; it is however significantly lower (0.9) for small islands. São Tomé and Príncipe is therefore likely to see tourism demand from its main markets drop nearly one-for-one should their economies contract. Results also show that tourists are price sensitive; in response to a 1 percent appreciation in the bilateral real exchange rate, arrivals and average nights-stay drop 0.11 and 0.27 percent respectively for a combined effect of 0.36 on total nights stayed.

6. São Tomé and Príncipe must build buffers to cushion against external shocks reverberating through tourism into the domestic economy. This entails a two-track strategy. The first track involves self-insuring against shocks by maintaining a steady pace of international reserves accumulation and the second includes reducing public debt to sustainable levels to provide buffers against external shocks. With regard to reserves accumulation, concerns with maintaining the peg with the euro suggest that a level around 3½ months of import cover should suffice; added vulnerability to external shocks would suggest somewhat higher and more prudent reserve coverage is desirable. On debt reduction, given that São Tomé and Príncipe is in high risk of debt distress, a medium-term goal of moving to moderate risk of debt distress appears attainable and will anchor fiscal policy. However, the goal can be reviewed over the longer term taking into account the many factors that impact on the optimal level of public debt.

This note was prepared by Dalmacio F. Benicio (AFR).

São Tomé and Príncipe: Select Indicators of Bottlenecks to Tourism

São Tomé and Príncipe: Volatilities of GDP and of Tourist Arrivals in TDSS, 2000–14 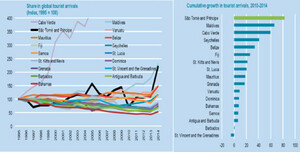 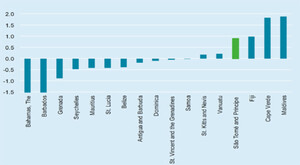 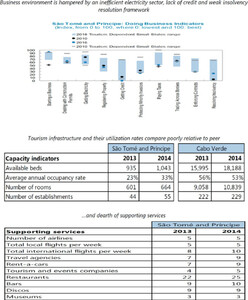 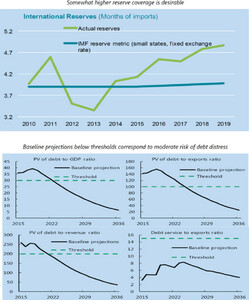