Potential Growth and Output in Albania1

Growth in Albania has slowed since the global financial crisis. This note aims to determine how much of the slowdown is due to cyclical conditions and how much to a reduction in potential growth. The analysis below shows that average growth in 2009–14 dropped by 3.2 percentage points relative to 1997–2008, of which 2.8 percentage points are due to lower potential growth. The first section of this note focuses on growth accounting to understand the drivers of growth. The second section looks at the medium term outlook. Finally, the third section estimates and discusses potential output.

A. Background and Growth Accounting

1. Albania’s real GDP growth2 has weakened since the global financial crisis. The average growth rate fell from 5.5 percent in 1997–2008 to 2.4 percent in 2009–14. Whereas Albania’s pre-crisis growth was among the highest in the Western Balkan region, post-crisis growth has decelerated to around the regional average (Figure 1). During the 2000s, the Albanian economy underwent a transformation which included large-scale privatization and massive reallocation of resources across sectors, mainly from agriculture and large SOEs to construction, retail trade, and the financial sector. Non-tradable sectors, in particular construction, expanded considerably thanks in part to rapid credit growth (see section C). Since 2008, the contributions of construction and services have declined significantly (Figure 2).

2. A growth accounting exercise shows declining contributions of total factor productivity (TFP) and capital (both physical and human). During 2009–14, their contributions halved compared to 1997–2008 (see Table 1 and Box 1 for details), in line with regional trends (Figures 3 and 4). Lower contribution from human capital also explains the relatively low growth during 2010–15 compared to other countries in the region.

3. Albania’s medium-term growth is expected to recover to around 4 percent of GDP, broadly in line with regional peers with similar per-capita income levels. The medium-term growth projections for the Western Balkans are generally higher than those for other Central and Southeastern European peers reflecting convergence dynamics (Figure 8). The key assumption behind these projections is that technologies and institutions converge and that international capital flows fuel this catch-up process. However, the weak growth observed during 2010–15 indicates that the speed of convergence may have slowed down compared to the pre-crisis period.

4. Growth is expected to accelerate in the medium-term supported by ongoing FDI and continued reforms towards EU accession. FDI projects will boost the capital stock, but reforms to increase TFP as well as labor utilization will be needed as well (Table 2). TFP gains will be driven by increased financial development, the clarification of property rights over land, improvements in the rule of law, and judiciary reform.3 This scenario also assumes that labor’s contribution increases as a result of three factors: a more stable population as migration decelerates, a small improvement in the labor force participation rate, and a gradual reduction in unemployment.

Reform scenario is consistent with the IMF program.

Assumes labor and TFP contributions consistent with historical averages for 2009-14, and the capital stock growing at a rate 85 percent lower than the reform scenario.

Reform scenario is consistent with the IMF program.

Assumes labor and TFP contributions consistent with historical averages for 2009-14, and the capital stock growing at a rate 85 percent lower than the reform scenario.

5. A reduction of migration outflows can help output growth. The reform scenario above assumes that for the next 10 years population continues decreasing at 0.2 percent per year (INSTAT’s estimate for 2015). This is a conservative assumption considering that the UN Population Prospects Report projects population growing for Albania—even assuming emigration—over the next 10 years. If net migration is reduced to zero, real GDP growth will accelerate by an additional 0.2 percentage points. The effect on real GDP per capita growth will depend on the level of human capital of the emigrants and the effect of that additional human capital on productivity. A higher human capital stock will increase productivity (through learning effects) and accelerate real GDP per capita growth (Lucas, 1988).

6. Measuring potential output is a complex task in developing economies. Potential output is defined in Okun (1962) as the maximum production level that avoids inflationary pressures. Potential output is unobservable and therefore it needs to be estimated. Each of the three standard approaches—univariate filters, production function, and multivariate filters—has advantages and disadvantages. No approach is free from controversy. The task is more complex in emerging economies where structural breaks and supply shocks are larger and more frequent. Short time series and limited data availability also constrain the estimations.

7. Univariate filters are simple but lack economic structure. These statistical filters, such as the Hodrick-Prescott filter, require a single input (only GDP series) and are easy to implement. Potential output is computed as a smoothed sequence over the actual output data. This implies that the average output gap is zero, by definition. However, these filters are sensitive to the smoothing parameters used and subject to the endpoint problem (the substantial revision to the end values of the series as the sample is expanded or forecast uncertainty is reduced). Another limitation of these filters is the lack of economic structure which hampers their ability to capture structural changes in the economy (Kuttner, 1994). While these filters can produce sensible results for large and advanced economies where aggregate supply shocks are smaller, they are less appropriate for developing economies where structural changes are important.

8. The production function approach identifies the drivers of growth, but is vulnerable to parameter mis-specification. A production function is assumed and potential output derives from combining the actual stock of capital with filtered series of employment and TFP. The main issue here is that it requires additional information such as employment, estimates of the capital stock, and an assumption regarding capital’s income share. The estimation is sensitive to the parameters assumed—in particular, the depreciation rate used to construct the capital stock series and the filtering method applied to employment and TFP.

9. Multivariate filters add economic structure, including indicators such as the unemployment rate or the capacity utilization rate; however, their estimation is complex. The method combines a univariate filter with a Phillips Curve and Okun’s Law to incorporate information from inflation and unemployment data to estimate potential output. These filters produce real-time estimates that are less sensitive to the endpoint problem when they are complemented with expectations of growth and inflation, but they are still subject to uncertainty from model or parameter mis-specification.

10. We estimate potential output using five models: two Hodrick-Prescott filters, two versions of the production function, and a multivariate filter. The estimations have been computed using annual data because the quarterly output series are short—starting only in 2005—and problematic, due to the high shares and volatility of agriculture and hydropower generation.

11. These estimations show similar patterns for potential output growth but higher dispersion in terms of the output gap (Figure 9–11). In 2016, all the methods show potential growth around 3 percent. Estimates of output gap, however, range between -0.2 to -2.6 percent of GDP (Table 3). To mitigate the specification errors of the different approaches, the results are aggregated using the mean across estimation techniques—as in Medina (2010).

13. Despite the wide dispersion in output gap estimates, they all indicate that since 2013 the economy has been below its potential. The different estimates all point to the conclusion that the output gap is now gradually closing.

The Impact of Credit Cycles

14. Estimates of potential GDP growth are likely impacted by the credit boom in the 2000s. The credit expansion caused real estate prices to grow much faster than the general price level. Between 2002 and 2010 property prices increased by more than 70 percent (in real terms) and credit to the private sector expanded from 6 to 36 percent of GDP (Figure 12). Such large credit booms can lift estimates of potential output temporarily, and vice versa (Berger and others, 2015).

16. We conclude that average growth in 2009–14 dropped around 3.2 percentage points relative to 1997–2008, of which 2.8 percentage points are due to lower potential growth. The main policy implication is that countercyclical policy should be centered on a potential growth of 2.9–3.2 percent and not the historical values of 5–6 percent. The second policy implication is that enhancing potential growth through structural reforms should be a top priority. Key growth-enhancing reforms should cover land property rights, the rule of law, fighting corruption, and the judiciary system. Improvements in land property rights will facilitate the reallocation of resources towards more productive sectors (such as tourism and agriculture). The rule of law and judicial reform will enhance growth across sectors by improving the return on investment.

The calculations assume a Cobb-Douglas production function. Output (Y) depends on physical capital (K), labor (L), human capital (H), and total factor productivity (A). Capital’s income share (α) is assumed to be 0.35, as in D’Auria and others (2010).

The stock of physical capital (K) is computed using the permanent inventory method, using the series for real GDP and real gross fixed investment (I) since 1980. The depreciation rate (δ) is set at 8 percent, consistent with Kota (2007), and the exogenous trend growth (g) is 2.6 percent, consistent with the historical data for the 1980–2016. The initial capital stock and its dynamics are described by:1

Labor (L) is defined as the employed population:

The series for population between ages of 15 and 64 was constructed based on INSTAT, World Bank, and United Nations statistics. The labor force participation and unemployment rates (UR) were built by splicing series from INSTAT and ILO.

Ht is the stock of human capital measured by the average years of schooling, which are computed by interpolating the Barro-Lee (2013) dataset. Finally, the return on education is assumed to be 0.11 per year consistent with the estimates of Psacharopoulos (1994).

Potential output is estimated following Blagrave, Garcia-Saltos, Laxton, and Zhang (2015). The filter assumes that the dynamics for potential output and the non-accelerating inflation rate of unemployment (NAIRU) are subject to shocks. It also includes empirical relations, such as the Phillips Curve and Okun’s Law, as well as expectations of inflation and output growth. The central parts of the model are the output and employment gaps that are inferred by the rest of the equations. The full model is detailed below.

where Yt is the log of real GDP, is the log of potential output. Gt is the unobservable long term potential growth, with a steady state at Gss. yt is the output gap and πt is the inflation rate. Ut is the unemployment rate, and is the NAIRU with a steady state at . is the unobservable long-term change in the NAIRU and ut is the unemployment gap. Finally and denote GDP growth and inflation forecasts from WEO (and measure expectations). Finally the ε’s are shocks to the different variables. The filter is applied to data for the period 1994-2020.

The methodology requires some assumptions. The NAIRU steady state is assumed at 13 percent, close to the minimum unemployment observed during 2003-2014, and the steady state of potential growth is assumed at 3.5, close to the values observed in other Balkan countries. The model was estimated using Bayesian estimation techniques, with the priors for the parameters displayed below.

Priors used in the estimation

Priors used in the estimation

The main results are summarized in the equations below:

“Sustainable” output is the output that an economy can produce in the absence of imbalances. This concept differs from potential output, which refers to the capacity to produce without accelerating inflation. During a credit boom, an economy may be producing at the potential level, but that level may not be sustainable as the financial cycle lifts potential output temporarily.

The smoothing parameters of the HP filter and the expanded model are set at 100.1

1/ Given the limited space, we focus on a smoothing parameter of 100, but results using 6.25 instead do not change the main results.

In this paper, “real GDP” and “output” are used interchangeably.

Cross country estimations (see Annex I) show that TFP’s contribution should be around 1.2–1.7 percentage points on average during 2016–20. 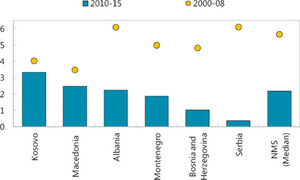 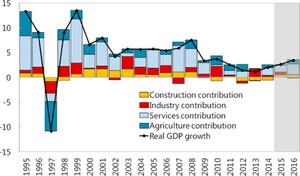 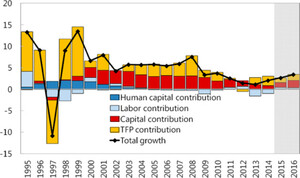 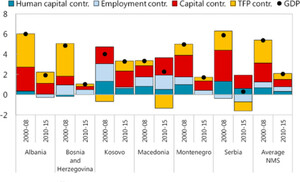 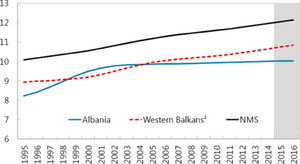 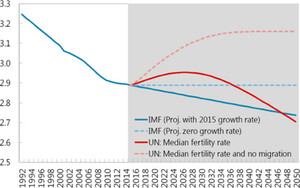 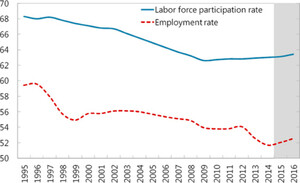 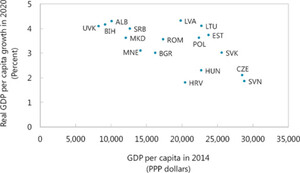 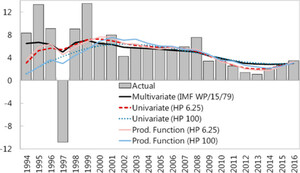 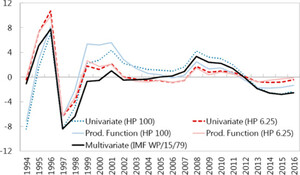 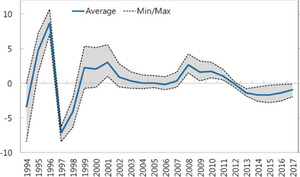 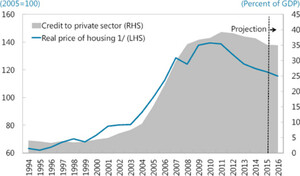 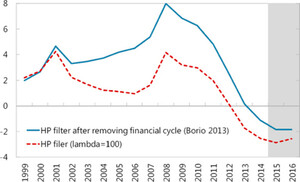 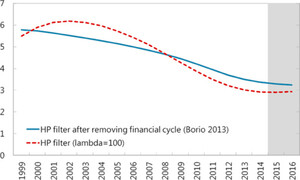 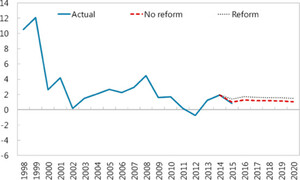