Thailand’s financial sector has expanded rapidly over the last decade and important changes in its structure have taken place. While corporate debt has remained broadly stable, household debt has increased to one of the highest levels among emerging markets, raising concerns of household debt overhang. Against this backdrop, this chapter presents policy options to safeguard financial stability.

A. The Changing Financial Landscape

1. Thailand’s financial sector has expanded rapidly over the last decade and is now one of the largest among middle-income countries. Total financial assets, excluding those of the Bank of Thailand (BOT), increased from 202 percent of GDP in 2007 to 283 percent of GDP in the third quarter of 2015 (Table 1). Notwithstanding the development of capital markets and nonbank financial institutions, depository corporations continue to account for the bulk of financial intermediation, with nearly 70 percent of total financial assets (excluding the BOT).

Total Assets of the Financial Sector

Total Assets of the Financial Sector

2. There have been important changes in the structure of the depository corporations sector (ODCs). Depository Specialized Financial Institutions (DSFIs)—policy banks that implement government objectives—have grown very rapidly and now represent about 20 percent of total assets of the ODCs.2 Similarly, other depository institutions, such as credit cooperatives and credit unions, have also expanded rapidly but from a low base.

3. Another salient feature has been the growing presence of nonbank financial corporations (OFCs).3 A very low interest rate environment stimulated innovation of financial products and services. Demand for mutual funds, insurance products, and consumer loan products provided a backbone for growth in the financial industry. Interbank money markets have also supported financial deepening. OFC assets increased from 63 percent of GDP in 2007 to 90 percent in the third quarter of 2015, accounting now for roughly 30 percent of the total financial sector.4

B. Risk Assessment of Financial Institutions

5. The Financial Soundness Indicator Map of depository corporations suggests a medium rating on financial vulnerability (Table 2). The medium rating is driven by the credit cycle. From this perspective, the recent moderation in credit growth is welcome. While the credit-to-GDP ratio has continued to increase, credit growth itself started slowing down in 2013 and continued to moderate to 4.9 percent y/y in December 2015 (Figure 2). Although credit demand from SMEs and households picked up at end-2015, depository corporations tightened credit standards given concerns over credit quality, except for large firms.

6. Risks are mitigated by overall sound balance sheets, though there are pockets of vulnerabilities:

7. Several factors explain the rise in household debt. Commercial banks and SFIs have been expanding mortgage loans to households. With favorable price developments in the condo market, the value of home equity has been rising. A number of commercial banks have also been offering home equity loans to help pay off higher interest debts, finance home renovation, and start a business. In addition, consumer loans have become widely accessible over the past years. Following the 2011 floods, the authorities introduced a tax rebate program for first-time buyers of automobiles to support the country’s auto industry.5 Cooperatives continued to expand consumer loans, following the 2008 global financial crisis and the 2011 floods. Banks and nonbanks have been issuing credit cards, with increased penetration across households of different income levels.

9. Prices in some segments of the housing market have appreciated rapidly, supporting household net worth and credit demand. Home ownership has remained high during the most recent credit boom, and prices for single-detached houses have increased by 30 percent since end-2008 (Figure 4). Following the 2011 flood, demand for condominiums soared due to the extension of the mass rapid transportation network, and condominium prices have increased by nearly 70 percent since end-2008. The price appreciation has been partly driven by easily-accessible terms for mortgage loans, with low down payments regardless of the number of condos in the client’s possession.6 While much of the mortgage loans are extended to first-time home buyers, an estimated 10 percent of real estate purchases is for investment purposes. Land prices in Bangkok and vicinities have also increased by 66 percent since end-2008. These favorable developments have strengthened the value of collaterals, facilitating access to consumer loans backed by home equity.

10. Macroeconomic conditions have also contributed to the growth of household debt relative to disposable income (Figure 5). When household debt dynamics are decomposed based on the household budget constraint (IMF, 2015),7 the analysis shows that the accumulation of financial and residential assets (aat) has played a significant role. In addition, the household saving rate (st) declined to 8½ percent in the most recent period, from 15 percent in the 1990s. More interestingly, the real interest-to-income differential (it −πt −gt) has widened, driven by higher real interest rates and lower growth in disposable income. Further declines in prices during 2015 may have further increased the real interest rate-to-income differential and the real debt burden.

11. While credit growth has slowed, high household debt and its fast increase relative to disposable income raise concerns (Figure 6). The pace of increase in household debt relative to income in Thailand has been very pronounced, much faster than that in Korea or the United States. Such rapid increase raises concern of vulnerabilities associated with a protracted slowdown in economic growth (a.k.a. debt overhang) if households need to deleverage their debt (IMF, 2012).8

12. The distribution of household debt matters for assessing risks. Data stratification based on household characteristics, including income, age, occupation, and wealth, can map vulnerabilities of household debt. Based on other studies,9 the following salient points emerge:

14. The BOT has achieved important milestones to strengthen the resilience of the financial sector. Microprudential regulations have been aligned with international standards. The BOT has also strengthened the supervisory framework and upgraded onsite and offsite supervision (IMF, 2009). Risk management and monitoring have been incorporated in the framework, including by issuing guidelines and enhancing data collection and analysis of prudential indicators. Moreover, SFIs have been brought under the BOT’s supervisory umbrella. The BOT has also recently set up a dedicated Financial Stability Unit (FSU) for systemic risk monitoring and analysis.

The coverage of the data was expanded in 2010 to include additional nonbanks, contributing about 7 percentage points to the overall increase in total assets from 2010 to the most recent period.

The program ran between October 2011 and December 2012. The scheme was designed to promote auto ownership among low- and middle-income households. The government would start providing rebates equivalent to 10 percent of the maximum price (i.e. B 1 million) for those who held the car for the minimum of five years.

Mortgage loans often require a minimum 10 percent for down payments in Thailand, and households are able to get additional loans with the purchase of mortgage and life insurance.

The study shows that a one percent decline in real house prices lowers consumption growth by 0.3 percent for countries with high household debt. The impact from debt overhang is sizable when household debt is high and has climbed rapidly prior to declines in asset prices.

The Thailand Deposit Protection Agency Act was enacted in 2008 and came into full effect in 2012. The Act protects depositors who hold accounts at commercial banks, finance companies, and credit financiers.

The credit-to-GDP ratio in Thailand is among the highest in emerging markets. In particular, household debt rose markedly in recent years, faster than prior to the Asian Financial Crisis. Corporate debt remained broadly stable.

Thailand: Credit Growth to the Private Sector by Depository Corporations, 2007–15

Credit growth by depository corporations moderated in 2015. Credit to nonfinancial corporations generally declined faster than credit to households, the latter supported by loans from SFIs. 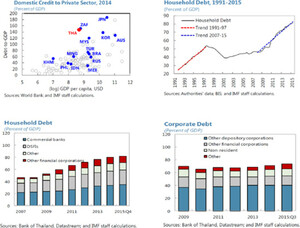 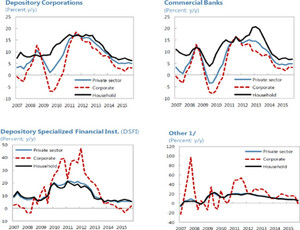 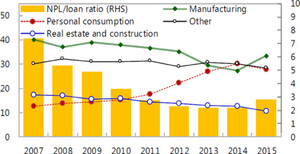 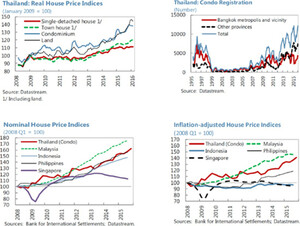 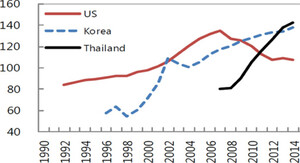