1. Inflation has been outside the central bank’s target band since early 2015. Coinciding with the decline in commodity prices and exchange rate depreciation, inflation breached the upper band of the inflation target (4 percent) in February 2015 and has remained above 7 percent since the beginning of 2016. Twelve-month-ahead inflation expectations stand at 4.4 percent but 24-month-ahead expectations remain within the target band. Market-based measures yield expectations of up to 4.9 percent. The central bank reacted to increasing inflation with cumulative interest rate hikes of 200bps since August 2015. Understanding the underlying forces behind the increase in inflation is important to design an appropriate policy response.

2. This paper explores three possible drivers of inflation dynamics in Colombia: exchange rate pass-through, the El Niño meteorological phenomenon, and wages. The results indicate the first two factors have contributed very significantly to the surge in inflation but their effects are expected to subside in coming months. So far, wages do not seem to have been an important driver of inflation.

3. The Colombian peso depreciated in line with the decline in oil prices, pushing up tradable-goods inflation. The trade-weighted exchange rate depreciated 30 percent since July 2014,2 making imported goods more expensive. Since commodity prices are projected to remain low for an extended period, a significant part of the depreciation is likely to be permanent. In response to the large depreciation, tradable goods inflation has been in the 5–7 percent range since August 2015.

4. This section estimates exchange-rate pass-through (ERPT) coefficients for Colombia in a stylized framework to gauge the contribution of the peso depreciation to inflation. Following a well-established literature (e.g., Campa and others 2005), we use econometric tools to establish the effect on inflation of a one percent depreciation in the NEER. The result of the estimation is the so-called ERPT. It is important to note that, unlike Forbes (2015) and others, we do not have a formal model to identify the different shocks that give rise to endogenous depreciations. This is an important limitation since the response of inflation to the NEER is endogenous to the state of the economy and can vary substantially depending on the sources of the shock. The exercises below are agnostic on the source of NEER changes: the responses of inflation to depreciations we compute should be interpreted as capturing the effects of a combination of shocks that affected the NEER in the estimation sample. In other words, they are averages of the conditional response of inflation to changes in the NEER as a result of a variety of structural shocks that were estimated in reduced form.

5. The results from three different methodologies point to a moderate ERPT of 0.04–0.07 in Colombia (Figure 3).3 This is in line with the estimates from international banks (BBVA and Credit Suisse) and IMF (2016). Rincon and Rodriguez (2015) find an ERPT of 0.04 in a linear VAR model. Earlier studies by Rincon (2000) and Rowland (2003) using mostly pre-inflation-targeting samples find higher ERPT coefficients in the range of 0.1–0.2. The results in this paper are based on two commonly used VAR approaches and a local projections approach to estimate the ERPT.

6. Colombia’s ERPT is low in regional perspective (Figure 4). IMF (2016) applies a local projections method to estimate the ERPT across Latin America. At the one-year horizon, Colombia’s ERPT is the lowest among LA5 countries. In a larger EM sample, they also find that the ERPT is much lower for EMs that target inflation.

7. The literature suggests the ERPT is higher for large permanent depreciations but also finds that inflation-targeting regimes lower the pass-through. An important issue concerning the estimation of the ERPT in Colombia is that depreciation spells were minor from 2000 and up until very recently. This raises the possibility that the estimated ERPT is relatively low since domestic prices may be very rigid downwards (i.e., as the currency appreciates and imports get cheaper, domestic prices do not fall and firms’ margins increase). Caselli and Roitman (2016) explore the possibility of asymmetric ERPT in a large sample of EMs. They find that the depreciation ERPT is four times larger than the appreciation ERPT. The ERPT is also higher for large and permanent depreciations. Importantly, though, they find that, all else equal, the ERPT is lower in inflation-targeting regimes. Gonzalez and others (2010) study the specific case of Colombia and also find evidence of asymmetric ERPT (higher for depreciations and in periods where inflation is high).

8. Recent work by the Colombian central bank highlights the time-varying nature of the ERPT in Colombia. Rincon-Castro and Rodriguez-Niño (2016) find that the ERPT varies substantially depending on the state of the economy. For instance, the ERPT is higher when inflation is high and volatile or when the exchange-rate appreciation/depreciation accelerates. When exchange are volatility is low and firms expect depreciations to persist, the ERPT is higher. The authors conclude that a specific policy rule to react to depreciations would be hard to implement since the response of inflation is highly endogenous to economic conditions.

9. Based on the estimated ERPT coefficients, the depreciation contributed around 120 bps to inflation in 2016Q1 but its effects are expected to vanish quickly (Figure 5). Given the actual and projected path of the NEER, the impulse response function derived from the local projections method indicates that the NEER path up until end-2015 would have contributed around 120 bps to inflation in 2016Q1. Going forward, the NEER is projected to appreciate slightly in line with stabilizing oil prices. As the effects of past depreciations fade away, the contribution of the ERPT to inflation is expected to drop sharply in the second half of 2016 and converge to the target band in early 2017.

10. An intense El Niño episode began last year, bringing a severe drought to Colombia and sharply increasing food prices. El Niño is a band of above-average ocean surface temperatures that periodically develops off the Pacific coast of South America, and causes major climatological changes around the world. In Colombia, it results in severe droughts that reduce agricultural production and increase food prices.

11. Econometric analysis reveals a tight relationship between El Niño episodes and inflation. As in Cashin and others (2015), we use the Southern Oscillation Index (SOI) as a measure of El Niño episodes. The SOI is a standardized index based on the observed sea level pressure differences between Tahiti and Darwin, Australia. The SOI is one measure of the large-scale fluctuations in air pressure occurring between the western and eastern tropical Pacific during El Niño episodes. SOI values persistently below -1 indicate a high likelihood of El Niño. We estimate the impact of the SOI on Colombian inflation using the local projections method. We model y/y quarterly inflation as a function of the SOI and lags of the NEER and wages. A negative one-standard deviation shock to the SOI has an impact on inflation lasting four quarters. The magnitude of the effect is within the range estimated by Cashin and others (2015), who use a GVAR framework with 21 countries (not including Colombia).

12. The current El Niño episode may be contributing 125–200 bps to inflation. The SOI reached persistently negative values starting in mid-2015 (Figure 6). The impulse response function estimated above indicates that the SOI path in 2015 added 125bps to inflation in 2015. A simpler econometric approach where y/y inflation is regressed on contemporaneous wage and NEER growth, and the lagged SOI would yield a 200bps impact of El Niño on inflation in 2016Q1. Since El Niño is a highly cyclical phenomenon, its influence on inflation is very likely to vanish in the second half of 2016.

13. The 7 percent increase in the minimum salary in 2016 and the existence of indexation mechanisms may be other relevant drivers of inflation. A number of services such as education, health, and rents are indexed to inflation and could prolong the inflationary spell Colombia is experiencing. The increase in the regulated goods CPI in January-February is consistent with the idea that indexation is exerting some pressure on inflation.

15. In the inflation-targeting period wages do not appear to be a significant driver of inflation but other indexation mechanisms may be at work. The role of wages is explored estimating a stylized mark-up model (Brouwer and Ericsson 1998, Goodfriend 1997). In the mark-up model inflation is a function of domestic costs and the cost of imported inputs. The former is captured by wages and the latter by the NEER. In the model, the following relationship can be derived

17. Inflation rose sharply in 2015 and remained at 8 percent in March. 24-month-ahead inflation expectations are within the central bank’s target band (2–4 percent) but 12-month ahead expectations are not. Market-based expectations are also above the target band. In response, the central bank initiated a tightening cycle that brought the policy rate to 6.5 percent in March, up from 4.50 percent a year earlier. Their objective is to ensure the convergence of inflation to the target band in 2017 and reduce the current account deficit. The central bank raised rates weighing continued price pressures and the activation of indexation mechanisms against the risk of a more pronounced slowdown in domestic demand.

18. The pass-through from exchange rate depreciation and El Niño episode are adding up to 320 bps to inflation, albeit on a temporary basis. Staff estimates indicate that the sharp depreciation in 2015 contributed around 120bps to inflation in the first quarter of 2016. As the exchange rate bottoms out in the course of 2016 in line with stabilizing oil prices, its impact on inflation is expected to recede quickly. El Niño is exerting pressure on food prices, with an estimated impact on headline inflation of 125–200bps. Food prices are expected to fall sharply when the wet season begins in the second half of the year.

19. Indexation mechanisms may amplify inflationary shocks but under staff’s projections inflation is expected to start declining in the second half of 2016 and converge to the target band next year. There is no evidence of a strong link between minimum wage increases and inflation but indexation mechanisms for a number of items such as health services are increasing the CPI early in the year with persistent effects on projected inflation rates in coming months. The persistence of the depreciation shock may also affect the prices of nontradable goods and inflation expectations. Nevertheless, staff projects inflation to gradually converge to the target band as a result of tighter monetary policy and declining price pressures from depreciation and El Niño.

Prepared by Sergi Lanau and Christina Kolerus. We thank the staff of the central bank for their useful comments.

According to the JP Morgan broad nominal trade-weighted exchange rate index as reported by Haver.

A much simpler measure based on actual data between July 2016 and January 2016 yields a pass-through of 0.042. Over the period, the partial elasticity of the tradable CPI excluding food and regulated items to the NEER weighted by nontraditional trade was 4.2 percent. We are grateful to the authorities for pointing us to this simple and transparent method.

The results are robust to alternative orderings.

Structural changes in the period 1992-2015 such as the transition to a currency band in 1992–94 and the flotation of the exchange rate in 1999 could bias the estimates.

Impact of Depreciation on Inflation

Impact of SOI shock on inflation 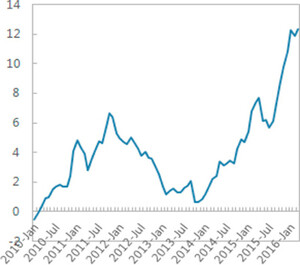 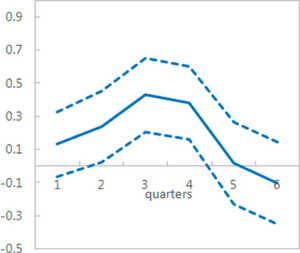