Monetary and Financial Conditions in Colombia1

This paper presents an assessment of the monetary policy stance and broad financial conditions in Colombia, which provides insights about macro-financial linkages. First, we estimate the nominal neutral interest rate, and find a positive monetary policy gap.2 Second, we study two traditional indices based on interest rates and spreads (monetary and financial conditions indices) and a more recent one (Macro-Risk Premium) that can be related to intermediaries’ balance sheet data. We conclude that while the former suggest that financial conditions in Colombia have loosened since mid-2014, the latter suggest otherwise—in line with our assessment of a moderation in credit and domestic demand growth.

1. Monetary policy has tightened since inflation breached the upper limit of the target range in 2015. Mostly due to the oil price shock, the Colombian exchange rate depreciated around 76 percent since 2014Q2, which contributed to push inflation by end-2015 outside of the target range at 6.4 percent. To contain inflation pressures and ensure that expectations remain anchored, the authorities have raised monetary policy rates by 200 bps to 6.5 percent since September 2015 (Figure 1).

4. We find that overall current monetary and financial conditions were accommodative in 2015, but have moved toward a more neutral stance in 2016Q1. Both the MCI and the FCI point to the sharp depreciation of the currency as the main driver of the recent monetary easing, together with a slow response of lending spreads to the monetary policy tightening. However, the analysis on the macro risk premium suggests that it has been increasing since the third quarter of 2014. This suggests that the risk appetite of financial intermediaries is decreasing as their balance sheets tighten, and is consistent with a slight moderation of credit growth and our envisaged slowdown of aggregate demand.

5. The paper is organized as follows. Section B presents the estimates of the neutral interest rate. Section C presents the MCI. Section D provides an overview of the methodologies for calculating the FCI. Section E presents the FCI, and discusses its forecasting properties. Section F analyzes the relation between the MRP and banks’ balance sheets. Section G draws conclusions from the above.

6. Staff estimates suggest that the nominal neutral interest rate for Colombia ranges between 5.9 and 8.4 percent. Following Magud and Tsounta (2012), different methodologies are used to estimate the neutral interest rate: the first takes advantage of the uncovered interest parity condition; the second uses a Taylor rule augmented for inflation expectations; the third solves a standard consumption-smoothing model; and the fourth applies a Hodrick-Prescott (HP) filter to the interest rate series. The current nominal monetary policy interest rate of 6.5 percent is within the neutral range, but slightly below the average estimated neutral monetary policy rate.3 Hence, with inflation outside the target range and the risk that expectations may become unanchored, the central banks has room to further increase the monetary policy rate.

Estimates of the Neutral Interest Rate

Estimates of the Neutral Interest Rate

7. A Monetary Conditions Index (MCI) can also be used to assess the overall stance of monetary policy. The MCI is defined as a weighted average of deviations of a short-term interest rate and the exchange rate from values in a baseline quarter:

where r is a real short-term interest rate and q is the real effective exchange rate. The reference period is 2005Q1. The ratio captures each variable’s relative impact on GDP. We use a ratio of 3, which is derived from a VAR analysis and is consistent with estimates in the literature.

8. The MCI points to an accommodative monetary policy stance in 2015. According to the MCI, monetary conditions in Colombia have been easing steadily since the first quarter of 2014 (Figure 2). Furthermore, despite the recent hikes in the policy rate, monetary conditions eased in the last two quarters of 2015 due to the sharp depreciation of the currency.4

9. There are two prominent approaches to the construction of FCIs in the literature: a vector autoregressive (VAR) and a principal-component approach.5 In the first approach, the weights of each financial indicator are assigned according to the estimated impact on real GDP growth in a VAR or structural macroeconomic models (VAR-FCI). The second approach is based on the principal component analysis, whereby a common factor is estimated from a group of several financial variables and interpreted as the unobserved common variable underlying the variation of all the financial variables included in the index (PC-FCI).

13. The VAR-FCI correlates with GDP growth better than any individual indicator (Table 2). Also, the weighted-sum FCI tends to correlate the most with one- and two-quarter ahead growth rates, suggesting potential predicting power for near-term growth. Among the domestic financial variables, bank-lending rates and the EMBI spread have the highest contemporaneous correlation with GDP growth. Among external variables, the VIX index has the highest contemporaneous correlation with GDP growth, reflecting Colombia’s exposure to global risk aversion.

14. The principal-component FCI is largely driven by the S&P 500 and VIX indices, with factor loadings of more than 80 percent. Figure 5 shows the factor loadings. These loadings reveal the signs and magnitudes of variables included in the index. For example, a factor loading of 0.8 for the EMBI spread implies that the common factor explains 80 percent of the variance in Colombia’s sovereign spreads—i.e., a substantial part of the factor-based FCI reflects developments in Colombia’s EMBI spreads. Higher S&P 500 index and lower VIX are associated with easier financial conditions. Among domestic variables, the EMBI spread, lending rate and policy rate are the most significant for the factor-based FCI. Lower policy and lending rates, lower EMBI spreads, and REER appreciation are associated with better financial conditions.

15. Adrian, Moench, and Shin (2010) argue that financial intermediaries that actively manage their balance sheets play an important role in the business cycle. Their argument is based on the relationship between rapid growth of banks’ balance sheets, lower risk premiums, and higher real activity. They argue that banks actively manage their balance sheets to keep enough capital to meet regulatory and other risk management benchmarks (e.g., value-at-risk constraints), which induces fluctuations in the price of risk in the economy (the macro risk premium). They show that when intermediaries are less capital constrained, their risk appetite increases, and the macro risk premium decreases. As a result, credit supply is increasing when the risk premium falls, as banks are tempted to search for new borrowers they can lend to.

16. We find that such relationships exist in Colombia. First, we estimate a “Macro Risk Premium” (MRP) by correlating risk premia with GDP. Second, we regress the MRP on different measures of credit growth (total credit, commercial credit, consumer credit, and mortgages). We find that the MRP is negatively correlated with GDP growth, and that higher credit growth is associated with lower MRP (Figure 6 and Table 3).6

17. The MRP has been increasing since the third quarter of 2014. Higher sovereign spreads and policy rates, together with a steeper yield curve have contributed to this result. Moreover, this increase in spreads is associated with decreases in the slack of financial intermediary balance sheet capacity and tends to reduce the supply of credit. These results are consistent with the recent moderation in credit growth. Moreover, in contrast with sovereign spreads, lending spreads have remained broadly stable, containing the increase in the MRP (Figure 7). Thus, we expect a further slowdown in credit growth as the ongoing monetary policy tightening continues reducing the risk-taking capacity of the banks and lending spreads increase.

18. Overall, despite the recent monetary policy tightening, traditional monetary and financial conditions indices suggest an accommodative situation in 2015 that has started to be reversed in early 2016. However, these indices summarize information in financial price variables which makes them useful for forecasting economic activity at high frequencies. But they tend to miss the information in balance sheet data and, at least in the current juncture, they give too much weight to exchange rates, which are performing an important role in the current adjustment process in Colombia. Thus, the MRP analysis overcomes this problem as it excludes the exchange rate and add balance sheet data to the usual price information. We find that the MRP has been increasing since the third quarter of 2014. This suggests that the risk appetite of financial intermediaries is decreasing as their balance sheets tighten, and is consistent with a slight moderation of credit growth. Moreover, the ongoing monetary policy tightening will further affect the risk-taking capacity of the banks and contribute to the slowdown of credit growth in line with the envisaged slowdown in aggregate demand in 2016.

The difference between the nominal neutral interest rate and the actual monetary policy rate.

As noted by Magud and Tsounta (2012), and by the wide range above, it is difficult to have a precise estimate of the neutral rate. Moreover, the results of some of the methodologies are too sensitive to changes in the underlying parameters.

One difficulty associated with the MCI (and to some extent with the FCI) is that it does not capture that the real exchange rate varies over time. Thus, it cannot distinguish whether the depreciation of the currency reflects easing monetary conditions or the appropriate response to a shock to fundamentals (e.g., terms of trade shocks).

See Annex I for more details on the methodologies.

See Annex II for more details on the methodology. 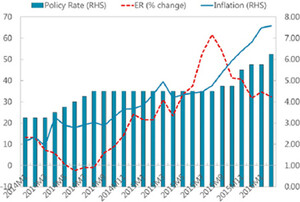 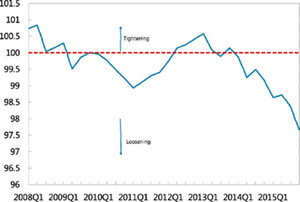 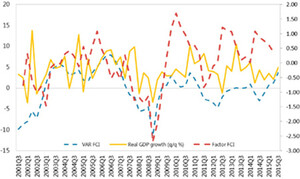 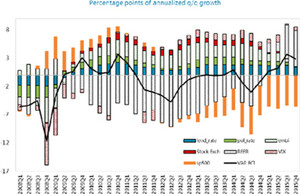 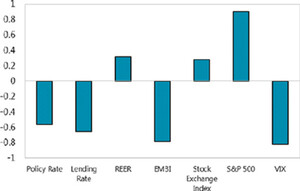 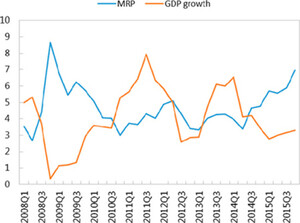 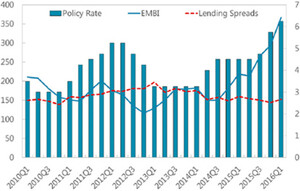