This note examines the current state of financial development in Costa Rica, as well as implications for potential growth and stability from further financial deepening. Costa Rica’s financial system continues to lag behind those of other emerging markets as well as the country’s macroeconomic fundamentals. In the short run, Costa Rica should aim at removing distortions that prevent the country from reaching its full financial development potential given the current state of macroeconomic fundamentals. This includes following through on the modernization of its collateral framework, ensuring a level playing field for private and public banks, following market-friendly debt management and issuance strategies, and taking steps to support the development of the stock market. In the longer term, as fundamentals continue to evolve, Costa Rica would benefit from further financial development in terms of growth and stability, provided there is adequate regulatory oversight to prevent excesses.

A. Financial Development: Where Does Costa Rica Stand?

1. Costa Rica’s financial development was assessed using a comprehensive index. Financial development has proven difficult to measure. Typical proxies in the literature such as the ratio of private credit to GDP and, to a lesser extent, stock market capitalization are too narrow to capture the broad spectrum of financial sector activities. To better capture different facets of financial development, we employ a comprehensive and broad-based index covering 123 countries for the period 1995-2013 (see Appendix and Heng and others, 2015). The index contains two major components: financial institutions and financial markets. Each component is broken down into access, depth, and efficiency sub-components. These sub-components, in turn, are constructed based on a number of underlying variables that track development in each area.

2. Costa Rica’s financial system deepened notably in the past decade but continues to lag behind those of other emerging markets. The improvements came from growth in financial institutions, in particular, better institutional access and improved efficiency. In contrast, market development stagnated. Despite the recent progress, Costa Rica continues to lag behind other emerging markets on many dimensions. In particular, it lags other EM groups on all of the subcomponents of financial market development. It is also behind other EMs on some aspects of institutional development, though performance varies by component. In fact, Costa Rica compares favorably on institutional access, outperforming all other EM country groupings. Good access reflects a wide network of ATMs and bank branches per 100,000 adults. However, the country lags behind other EMs on institutional efficiency, though it slightly exceeds the LAC average on this component. Low efficiency reflects high interest rate spreads, high overhead costs, and high net interest margins. Finally, Costa Rica is behind all other country groupings on institutional depth due to the low level of credit and deposits to GDP as well as small mutual fund and insurance industries.

3. Costa Rica’s financial development is also below the levels predicted by country’s fundamentals (Panel 2). A simple cross-country comparison above does not account for differences in the underlying macroeconomic conditions. Financial development gaps—the deviation of the financial development index from a prediction based on economic fundamentals, such as income per capita, government size, and macroeconomic stability—can help identify potential under or overdevelopment of Costa Rica, compared to countries with similar fundamentals. These gaps suggest that Costa Rica’s financial development is below the levels predicted by its macroeconomic fundamentals on all but two subcomponents. The exceptions are two narrow measures of institutional efficiency, namely, 3-bank asset concentration and non-interest income. Other measures, however, including lending-deposit spread, bank interest margin, and overhead cost, point to inefficiencies in the banking sector. To the extent that the negative gaps reflect distortions or market frictions, they need to be addressed. For example, high interest rate spreads are likely a reflection of the substantial presence of public banks, which lack strong incentives to improve efficiency. The relatively low credit-to-GDP ratio at least to some extent reflects a weak legal collateral framework, which was in place before 2015, and was probably one of the causes of the high collateral-to-loan ratio.

B. The Potential for Raising Growth and Stability through Further Financial Deepening in Costa Rica

5. Costa Rica has not yet reached the levels of institutional and market development that yield maximum benefits to growth and stability. In Latin America and the Caribbean, Brazil and Chile are closest to reaping those benefits, whereas the Dominican Republic, Paraguay, and Honduras lag behind (Panel 3). Costa Rica is still far away from reaping the maximum benefits to growth and stability, in particular, in terms of financial market development. Note that these estimates stem from a partial analysis that assumes that all other growth determinants (such as income level, inflation, government size etc.) are held constant while financial development is consistent with the level of macroeconomic fundamentals. Thus, in the longer term, reaping maximum benefits from financial development for growth and stability would also require improving Costa Rica’s macroeconomic fundamentals, which in turn would support further development of the financial systems. This is an interactive process whereby financial systems are shaped by fundamentals, and fundamentals evolve partly as a function of more developed financial systems. Estimates should, however, be interpreted with caution since it is difficult to disentangle causality in econometric terms, even though instrumental variables were used to address potential endogeneity issues.2

We use system GMM estimation (Arellano and Bover, 1995; Blundell and Bond, 1998) to address the dynamic dependence of our variables of interest and potential endogeneity of control variables. We also employ additional instrumental variables used in the literature, namely, rule of law (Kaufmann, Kraay and Mastruzzi 2010) and a set of dummies for the country’s legal origin (La Porta, Lopez-de-Silanes and Shleifer 2008).

The framework in Heng and others, 2015, in turn, follows Sahay and others (2015). For further details see “Advancing Financial Development in Latin America and the Caribbean,” forthcoming, IMF working paper.

Z-score is a measure of financial health. Z-score compares the buffer of a country’s commercial banking system (capitalization and returns) with the volatility of those returns. 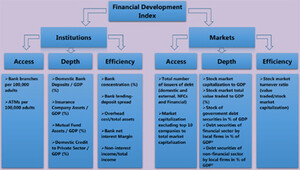