This note looks at the linkages between the Costa Rican real economy and financial sector. To do so, we first construct the monetary and financial conditions index (FCI), which captures the effects of current financial conditions on real GDP growth. We then simulate the effect of financial variables on the real economy through the IMF Flexible System of Global Models. Finally, we test the consistency of our baseline credit growth and macro projections against historical distributions for emerging countries, and analyze how macro-financial risks and conditions have changed over the past year. Results suggest that financial conditions are moderately tight but, if fully passed through to the economy the monetary stimulus injected in 2015 could considerably increase GDP, and so would enhanced competition in the banking sector, while a FX shock could take a toll on growth through increased NPLs and market risk premia. However, baseline projections show no evidence of macro-financial risk buildup, and credit growth remains supportive of macroeconomic activity.

1. The FCI summarizes the information contained in key financial variables and captures the correlation with economic activity. The financial variables included: (i) the real interest rate of bank loans; (ii) the real effective exchange rate (REER); (iii) the real growth of deposits and credit to the private sector; and (iv) a real housing price index (approximated by the housing component of the consumer price index). Hence, the FCI captures not only the impact of monetary policy, but also broader interactions between financial and real variables. We used VAR analysis to decompose the contribution of various financial indicators to real GDP growth, and built the FCI as the sum of the cumulative impulse responses of real GDP to each of the relevant financial variables. The model was estimated using Ordinary Least Squares based on quarterly data from 2001 to 2015.

3. We used the IMF’s Flexible System of Global Models (FSGM) to simulate the effect of various financial shocks on macroeconomic variables. The model was developed by the Economic Modeling Division of the IMF’s Research department for policy analysis (Andrle and others, 2015). It comprises a system of multi-region, general equilibrium models combining micro-founded and reduced-form relationships for various economic sectors. The model has a fully articulated demand side, and the supply side features is pinned down by Cobb-Douglas production technology. International linkages are modeled in aggregate for each country/region. The level of public debt in each country and the resulting implications for national savings determine the global real interest rate in the long run. The parameters of the model, except those determining the cost of adjustment in investment, have been largely estimated from the data using a range of empirical techniques. Real GDP is determined by the sum of the components of demand in the short run and the level of potential output in the long run. The households’ consumption-savings decisions are explicitly micro founded as are firms’ investment decisions. The OLG formulation of the consumption block gives the model important non-Ricardian properties, whereby national savings are endogenously determined given the level of government debt. Government absorption is determined exogenously, while imports and exports are specified with reduced-form models.

4. Transmission of financial shocks to the real economy takes place through changes in interest rates and risk premia. All interest rates are related to the risk-free interest rate, whose closest parallel is the monetary policy rate, from which they deviate because of risk premia or different maturities. The model includes several risk premia: one for the sovereign (which applies to the entire domestic economy), one that applies to both domestic households and firms, one that applies only to firms, and for the currency (or country). The expectation theory of the term structure determines the 10-year interest rates and there is an additional risk premium. Interest rates related to consumption, investment, and holding of government debt and net foreign assets are weighted averages of the 1- and 10-year nominal interest rates. The exchange rate in the short run is determined via the uncovered interest parity condition, while in the long run it adjusts to ensure external stability given households desired holdings of net foreign assets.

5. We simulate 4 scenarios which model shocks to monetary policy, the exchange rate and market premia, lending margins, and collateral requirements. The first (S1) simulates an expansionary monetary policy shock, modeled as a 100 basis points cut in the monetary policy rate, both under full pass-through and under a slower, but more persistent transmission to lending rates (Panel 1 in figure below); the second (S2) looks at currency depreciations of 5 and 20 percent that include a non-linear reaction in market risk premia of 25 and 300 basis points (bp) respectively (Panel 2); the third (S3) considers a reduction in bank lending margins resulting in a reduction in market risk premia of 100 basis points (panel 3); and the fourth (S4) is a decrease in collateral requirements yielding to higher credit growth that is partially financed by higher foreign borrowing. Aside from nonlinearities that can arise owing to the zero lower bound on nominal interest rates, the model is symmetric and roughly linear; therefore, the simulated shocks can be scaled up or down to consider scenarios of different magnitudes.

6. Results indicate that the recent 350 basis points cut in the monetary policy rate could increase GDP substantially. Specifically, if fully passed through to domestic lending rates, the monetary impulse provided by the BCCR from mid-2015 to early 2016 could increase GDP in 2016 by almost one percent relative to the baseline. In Scenario 1, a one-year 100 basis points decrease in the monetary policy rate results in a 0.2 percent GDP increase on impact under a full pass-through scenario compared to the baseline, due to both higher domestic absorption and export demand. The latter effect is induced by a depreciation of the colon following lower real interest rates compared to foreign rates. However, the transmission to lending rates of the monetary stimuli implemented over the last year has proven to be partial. Under a slower pass-through scenario, where only 1/3 of the impulse is passed to lending rates, the resulting increase in GDP in 2016 would be halved.

7. Conversely, a large currency depreciation could decrease output by up to 1.5 percent in the short and medium term, through its effect on NPL and decreased risk appetite. In scenario 2, a depreciation of the colon triggers an increase in market premia due to higher NPL in the context of high dollarized credit to un-hedged borrowers. The risk premium reaction to the depreciation is modeled as nonlinear, as defaulting loans—and with them banks’ risk aversion—are likely to increase more than proportionally with the extent of the depreciation. Hence, under a 5 percent depreciation/20 bp increase in risk premia, exports increase2 sufficiently to offset the adverse impact on domestic demand from the rise in risk premium, resulting in a slight increase in GDP on impact. Conversely, under a 20 percent depreciation/300 bp increase in risk premia, the latter prevails inducing a GDP decline of 1.5 percent one year after the shock, as the decreases in household consumption and private investment more than offset the boost from higher exports.

8. Increasing efficiency and competition in the banking sector could spur GDP by up to 2 percent in the medium term. At about 12 percent, banks spreads are exceptionally high in Costa Rica, which greatly constraints widespread access to credit. In scenario 3, we simulate a decrease in banks’ net interest rate spreads which translates in a 100bp permanent reduction in market risk premia. Lower rates increase both private investment and household consumption expenditure, fostering domestic absorption. The resulting increase in inflation triggers a policy rate increase that produces in an appreciation of the colon and lower exports. The net effect on GDP is positive and persistent, with the increase ranging from less than 1 percent in the first year to more than 2 percent after five years.

9. Reducing collateral requirements would yield a medium term boost to GDP similar to improvements in bank efficiency. With effective collateral-to-loan ratios hovering over 250 percent as of 2010, collateral requirements are also prohibitively high and non-conducive to efficient financial inclusion in Costa Rica. In scenario 4, permanently halving collateral requirements is assumed to bring about an 8 percent of GDP increase in domestic credit, about half of which would be financed by domestic excess liquidity and the remaining by an increase in foreign liabilities. Similarly to the effect of lower margins, this would increase domestic absorption while slightly depressing exports. The increase in private investment would also accumulate into a higher stock of private capital, which contributes to a persistent increase in both actual and potential output. As the latter adjusts more gradually, output rises above potential and a moderate positive output gap opens up. The overall medium term increase in GDP ranges from ½ percent in the first year to over 1½ percent in the sixth.

10. Baseline macro projections are consistent with accelerating credit growth in the short term. Based on the historical distribution of macro outcomes conditional on financial outturns in emerging markets, the team’s 2016 macroeconomic projections are consistent with credit growth accelerating to 14 percent in 2016. In particular, our projections for real GDP, investment, private consumption, and employment growth fall within the 25th and 75th percentile of the respective 2014 conditional distributions. Our inflation forecast, conversely, is lower than what would be implied by the projected credit growth, based on historical patterns, but this is due to the positive terms of trade shock induced by the protracted drop in international oil and commodity prices.

11. There is no evidence of macro-financial risks buildup. A broad selection of macro-financial conditions, including spillover risks from external sources, does not point to significant increased vulnerability compared to 2014. Market and liquidity conditions and, to a lesser extent, monetary and financial conditions, continue to pose the most significant risk to the system due to high gross foreign liabilities of the banking sector and dollarization of domestic credit. While high and increasing government deficit and debt deserve close scrutiny, the related risks are diluted by otherwise stable financial conditions, thus explaining relatively low overall macroeconomic risks.

A 0.58 price elasticity of exports is assumed in the simulations. 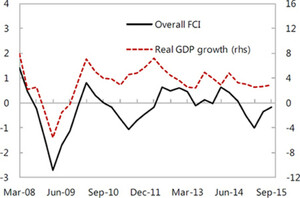 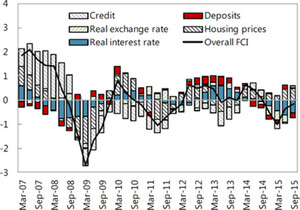 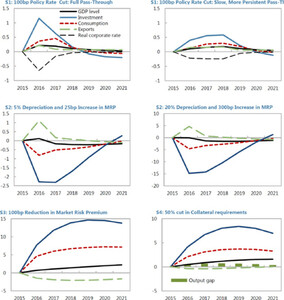 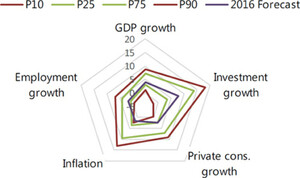 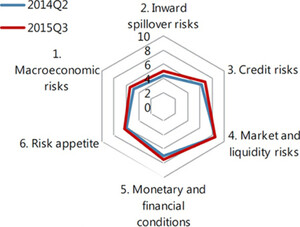