1. Slovenia’s exports have been the main contributor to GDP growth in recent years. In particular, by 2015 exports of goods and services had increased by 20 percentage points of GDP compared to their post-crisis low in 2009. This rapid increase in exports was due to an increase in the nominal value of exports as nominal GDP was relatively steadily over this period (Figure 1). This strong export performance raises the question of how Slovenia’s export sectors have remained resilient despite weak domestic conditions in the wake of the global economic and financial crisis. IMF (2013) finds that trade links between Germany and the four central European countries (CE4)—the Czech Republic, Hungary, Poland, and Slovakia—via supply chains contributed to rapid export and GDP growth in the CE4 countries. While Slovenia was not included in the IMF (2013) study, trade statistics show that Slovenia is also well integrated in European supply chains.

2. Slovenia trades intensively with Europe, with more than 90 percent of Slovenia’s goods sold to other European countries. Germany is Slovenia’s largest export market, followed by Italy and Austria. Slovenia’s top five export markets bought about half of Slovenia’s export products (Figure 2), with the other half going mainly to emerging European countries and countries in emerging Asia and the Middle East. Slovenia’s exports to Germany have remained stable at about 20 percent of total exports over the past ten years, likely due to Germany’s dominant position in European supply chains. While trade shares remained relatively constant, exports to Germany grew rapidly in value terms. Total exports in percent of GDP have also grown in recently years.

3. Slovenia has maintained its trade shares of both German and World imports, but unlike most of the CE4 countries it shares have not increased significantly (Figure 3). Among the CE4 countries, Poland and the Slovak Republic have shown the largest gains in market shares.

4. Strong growth in trading partners is one explanation for the considerable improvement in Slovenia’s current account balance. Slovenia’s current account switched from a deficit of 5 percent of GDP in 2008 to a surplus of 7¼ percent of GDP in 2015 (Figure 4). This was largely the result of a surge in exports that paralleled an increase in imports of Slovenia’s major export markets. For example, from 2008 to 2015, total German and Austrian imports rose by 23 and 13 percent, respectively, while Italian imports dropped by 5 percent. Not surprisingly, Slovenia’s exports of goods have increased by 13 percent since 2008, close to the weighted average of import growth in these three major trading partners.

5. During the same period, Slovenia’s imports remained relatively flat in line with slow GDP growth. For 2008–15, Slovenia’s nominal GDP rose only by 1½ percent, with real demand for imports rising by only 2¼ percent. And while trading partners were recovering from the global crisis, Slovenia was hit by a banking crisis in 2012–13, resulting in a nominal decline in both GDP and imports during this period.

7. So why hasn’t private investment rebounded more strongly given strong exports, GDP growth, and a large current account surplus? As discussed in the chapter on corporate financial health, many companies are still struggling with an overhang of corporate debt. This hinders their ability to invest. Exporters have been less affected than other firms because they are more likely to be large companies with substantial retained earnings, access to external financing, and/or easier access to domestic bank financing. In addition, exporters can post good collateral in the form of export earnings. In contrast, unreformed domestic firms (with relatively high debts and relatively low equity and profits) have suffered a deterioration in the quality of their collateral.

10. On the export side, shares of each country’s value added in German exports have increased significantly, suggesting substantial increases in integration since 1995. In fact, Slovenia’s exports of intermediate goods to Germany have increased more (by 2 percentage points of total exports) than for the CE4 countries (by 1 percentage point). The share of intermediate goods exports to Germany (5 percent of total exports) is similar to the share for the CE4 countries (4–6 percent of total exports). Thus, the contribution of Slovenia’s integration in the German supply chain to its export performance is on a par with other countries in the region.

11. The transportation, electrical equipment, machinery, and chemicals sectors are the most important for the CE4 countries and Slovenia in the German supply chain. The IMF’s 2013 Cluster Report on the German-Central European Supply Chain analyzes the German automobile industry, explains the factors driving integration of the CE4’s automotive sectors, and evaluates the contribution of the automotive sector to their economies. In Slovenia, the transport equipment, machinery, and pharmaceutical sectors make up almost half of the total exports and have been the main contributors to export growth (Figure 8).

13. Improving labor markets, boosting foreign investment, and enhancing vocational training would improve Slovenia’s competitiveness. Empirical research has identified these three structural components as important for export performance. Rahman and Zhao (2013) show that a country’s strong export performance globally and in Europe since the late 1990s has been associated with successful integration with supply chains. Rahman et al. (2015) further explore export performance in the European Union single market and find that export competitiveness depends on successful structural reforms in higher education, upgrading skills, wage incentives, and an environment that supports foreign investment. This section compares Slovenia’s development in these areas with the CE4 countries.

14. Better human capital supports incorporation of new technology, integration into supply chains, and improvement in exports. Rahman et al. (2015) find that two proxy indicators for human capital—higher education and the upgrading of vocational training and skills—explain close to 50 percent of export performance in the European Union. On measures of human capital, Slovenia compares favorably with the CE4 countries. The share of young people with secondary or higher education are similar to the levels in the Czech Republic, Poland, and Slovakia, and higher than the level in Hungary and the EU average (Figure 10). Slovenia has larger shares of employees participating in continuous vocational trainings than that in Hungary, Poland, and the EU averages. To utilize its skilled labor force, Slovenia also needs efficient labor market and supporting foreign investment environment.

15. The development of supply chains has been driven in part by firms outsourcing their production processes in order to seek efficiency gains through differences in wages. It is critical for host countries to provide a competitive wage structure. Slovenia does not show a comparative advantage in unit labor costs relative to the CE4 countries. For example, Slovenia’s unit labor costs remain higher than the CE4 countries in both the whole economy and in industry (Figure 11), although recent data suggest an improvement.

16. Well-functioning labor markets are also critical to ensure efficient allocation of labor and provide incentives to work. Rahman et al. (2015) uses two proxies, the inactivity trap and relative minimum wages, to measure labor market efficiency. The inactivity trap captures incentives to stay out of the work force due to either labor taxes or loss of social benefits.3 The inactivity trap indicator suggests that Slovenia provides weaker incentives to work relative to CE4 countries. Countries with low minimum wages, a measure of the cost of employing low-skilled labor, tend to have a comparative advantage in labor-intensive exports in their trade with the EU (Rahman et al., 2015). Although Slovenia’s minimum wage is low relative to that of the CE4 countries, relatively high unit labor costs offset a comparative advantage in labor-intensive exports. To provide an attractive labor market for multinational companies, Slovenia needs to reduce its unit labor costs (via increased productivity) and disincentives to work.

17. Foreign direct investment (FDI), particularly greenfield investment, has been a key channel to expand production in foreign countries. For example, the evolution of the German supply chain has been supported by large inflows of FDI to the CE4 countries (IMF, 2013). FDI is usually a relatively stable source of external funding, holds up well during external crises, and is less prone to sudden stops. FDI inflows were the main component in net capital inflows to the CE4 countries before the financial crisis, averaging 4½ percent of GDP per year. In contrast, FDI inflows to Slovenia were less than one percent of GDP per year before the crisis (Figure 12). As a result, the stock of FDI in the CE4 countries has been around 40 to 50 percent of GDP. The comparable figure for Slovenia has been less than 15 percent of GDP over the last decade. Another index, from the Economic Freedom of the World (EFW) 2015 report, indicates that there is a perception that Slovenia has more restrictions on foreign ownership and investment than the CE4 countries and that these restrictions have increased since the global financial crisis (Figure 13). The EFW’s index of foreign ownership and investment restrictions is based on two surveys from the World Economic Forum’s Global Competitiveness Report: (i) the prevalence of foreign ownership and (ii) regulatory restrictions on international capital flows. In Slovenia’s case, the perception of greater restrictions on foreign investment may have contributed to a lower level of foreign ownership. Rahman et al. (2015) conclude that Slovenia should make its foreign ownership regime more conducive for investors.

18. Slovenia’s current account surplus reflects strong integration in European supply chains, maintained price competitiveness, and lackluster domestic demand. Slovenia’s current account balance has risen dramatically from a deficit of 5 percent of GDP in 2008 to over 7 percent of GDP in 2015. From a trade perspective, the increase was driven by a significant increase in exports (in line with the growth of imports of Slovenia’s trading partners) while imports have remained relatively flat (in line with low GDP growth in Slovenia). From a savings-investment perspective, the 2008-2013 dynamics were driven by a large decline in private investment’s share of GDP, while improvement in the last two years has been driven by a sharp increase in private savings. The recovery in private investment has lagged due in part to the corporate debt overhang. In terms of integration, foreign imports have contributed very modestly to Slovenia’s exports. However, on the export side Slovenian goods have seen a significant increase in their incorporation into the European supply chain, particularly for Germany.

19. Nevertheless, additional steps could improve labor markets, boost foreign investment, and enhance training to increase Slovenia’s competitiveness further. Studies have shown that structural reforms are associated with strong export growth. In this regard, steps to address areas where Slovenia lags its peers could further improve competitiveness. These steps include further boosting human capital (e.g. by improving the quality of education to address demands of the marketplace), reforming labor markets (e.g. by reducing labor costs and disincentives to work), and increasing foreign direct investment (e.g. by reducing perceptions of a relatively restrictive investment environment).

Transport equipment sector includes the manufacture of aircraft and other aerospace equipment, railroad equipment, motor vehicles and auto parts, motorcycles and bicycles, as well as the building, repairing and breaking of ships.

Contributions to Changes in Savings and Investment 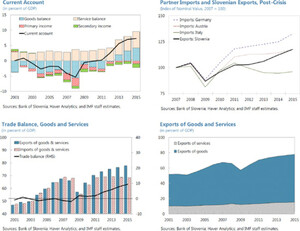 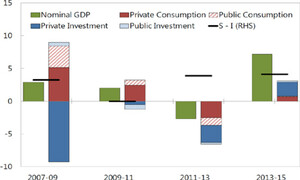 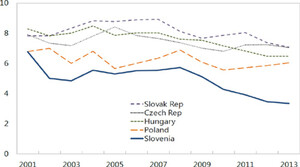