Lessons and Challenges in Accommodating Migrants and Refugees1

Past experience of handling migration flows and a positive public attitude have helped the authorities to mobilize resources for accommodating sharply rising refugee inflows from mid-2015. Economic migrants coming to the country in the past, mostly from other EU member states, had generally higher education than locals. When controlling for education and other relevant factors, past migrants earn less than natives for similar work, which might in part explain their success in claiming local jobs. Early evidence suggests that refugees that arrived in the country in the second half of 2015 have generally lower education attainment compared to past economic migrants. Further reforms are required to address structural unemployment and facilitate integration of low-skilled refugees in the labor force.

A. Coping with the Current Refugee Influx

1. The refugee influx into Luxembourg surged in the second half of 2015. Starting from September, asylum applications increased by about three times from last year and surpassed the previous monthly peaks of 2011–12. Actual refugee arrivals recorded at the border were even higher, as it took time for the newcomers to apply for asylum and some of them chose to proceed to neighboring countries. Although asylum applications subsided in early 2016, tensions in the Middle East, spillovers from neighboring Germany, family reunifications, and the EU relocation program could sustain elevated refugee inflows in the rest of the year.

3. The authorities responded by scaling up capacities for accommodating refugees. Incoming refugees were housed in empty public buildings and newly constructed “container villages”. Since the beginning of the crisis, Luxembourg doubled its capacity to accommodate refugees to about 4,000 people, and as of March 2016, the country housed about 3,000 of them (about ½ percent of its population). Drawing on past experience, the authorities considered that families with children are easier to integrate over time. All newcomers are enrolled in schools and language classes. To tackle the influx of pupils, the authorities issued a successful call to retired teachers to return to part-time work. To facilitate diploma recognition, they are eyeing the German example of holding focused interviews of refugees with professionals in their selected field of expertise.

4. Luxembourg’s society has generally a positive attitude to refugees and supports government efforts to accommodate them. According to a public opinion survey taken in November 2015, nearly half of respondents said that Luxembourg must continue to accommodate refugees in coming months. And nearly two-thirds of the respondents agreed that refugees are “people like us”.2

B. The Immediate Fiscal Costs and Long-term Gains

5. The immediate fiscal costs of accommodating refugees are significant but manageable. IMF Staff Discussion Note on the refugee surge in Europe estimated the costs at around 0.1 percent of GDP in 2015 and projected the same amount for 2016.3 Broadly consistent with these numbers, the Banque Centrale du Luxembourg (BCL) estimated extra fiscal costs at 0.15−0.20 percent of GDP over 2015–16.4 In case of sustained elevated refugee arrivals, however, fiscal spending in 2016 could exceed these estimates, on account of additional education, security, social assistance, public infrastructure needs and other costs. At the same time, the extra spending is bearable for Luxembourg whose fiscal surplus is projected at nearly 1 percent of GDP in 2016.

6. Past positive experience suggests that Luxembourg could, under the right circumstances, benefit from the current refugee surge in the long run. According to an OECD study, the positive net fiscal impact of immigration—encompassing both economic migration and refugees—for Luxembourg averaged about 2 percent of GDP in 2007–09, the highest among OECD countries (Figure 2 and Box 1).5 While the characteristics of the current inflow of refugees differ from those of past migration to Luxembourg—just as past migratory phenomena are not comparable among themselves (Box 2)—certain parallels do exist and point to potential benefits for the Luxembourg economy. In particular, the incoming refugees are generally younger and have higher fertility rates than Luxembourg natives. In case of a successful integration in the Luxembourg labor market and society, they could be expected to make broadly positive net fiscal contribution in the long term, particularly through their inclusion in the pension system.

Measuring the fiscal impact of immigration is a challenging task, and any estimate of the budget implications is largely dependent on the measurement approach and the assumptions made.

The most straightforward items to include in an assessment of the budget implications of migration are the direct financial transfers involving immigrants, that is, the taxes and social security contributions paid and the financial transfers received via unemployment and social assistance benefits, disability payments, family allowances, financial housing support, and the like. Specific issues arise with the pension system, where the time-lag between contributions and benefit payments is particularly long. Given the magnitude of the sums involved, inclusion or exclusion of the pension system can considerably alter the balance, as immigrants are largely underrepresented among the elderly in most countries, especially in countries where a large share of immigrants arrived only recently.

Direct fiscal transfers are not the only component that should be considered in assessing the fiscal impact of immigration. First, one should take account of the indirect taxes and consumption of social goods such as education and health by immigrants. Second, one should also consider public goods, some of which may partly depend upon the size and composition of the population. Finally, there are indirect budget implications arising from migrant’s broader impact on the economy.

When analyzing Luxembourg’s labor market and migration phenomena, it is important to distinguish between the main actor groups.

C. Performance of Past Migrants in Luxembourg’s Economy

8. On average, economic migrants who came to Luxembourg in the past have a higher educational attainment than natives while being paid about the same, which might in part explain their success in claiming local jobs. According to Luxembourg’s Labor Force Survey (LFS), migrants earn about the same average wage as natives. However, the educational attainment of migrants arriving during the past 35 years is significantly higher, pointing to their higher professional qualifications and skills. When controlling for education, job type and status, age, and other factors, regression analysis confirms that migrants are paid less than locals for the same jobs. The difference is about 6 percent on average and is particularly significant for newcomers, who in their first 8 years in the country earn about 11 percent less than natives (Annex I).

9. Alongside, economic migrants are more active in their job search. The activity rates among migrants who arrived in Luxembourg over the past 30 years vary from 52 to 86 percent, which is significantly above the average for the native population (48 percent). At the same time, the estimated unemployment rate among migrants is also higher, particularly in their first years in the country. It is also higher for older migrants who stayed in the country for more than 35 years and are retiring out of the labor force. For them, however, the below average activity and higher unemployment rate reflect their senior age rather than their migration status.

D. Comparing the Incoming Refugees with the Past Migrants Living in Luxembourg

10. Surveys of refugees taken in the neighboring countries indicate that their education attainment is below that of the past economic migrants and of Luxembourg’s population. According to an Austrian survey of about 900 asylum seekers who recently arrived in that country, nearly a quarter of them have higher (tertiary) education and only 1/5 of them did not complete secondary school.6 However, the share of people with low education level is higher among refugees from the conflict countries. According to a Germany survey of refugees from Syria, Afghanistan, Eritrea, Iraq, Iran, Sri Lanka undertaken back in 2014, about 37 percent of refugees from those six countries did not complete secondary school, of which 7 percent never attended school at all.7 These surveys suggest that the educational level of asylum seekers who recently arrived in Luxembourg is likely below that of Luxembourg citizens and economic migrants that came to the country in the past.

11. Moreover, language barriers, diploma recognition and other disadvantages make it difficult for the refugees to realize the full potential of their educational background. Refugees arriving from the Middle East appear to mostly not speak European languages and need to learn them in their host countries. Verification of their diplomas and other documents is a challenge, and their professional qualifications do not always match the technical requirements and standards of European host countries. In practice, this means that refugees often enroll in the labor market at a professional level well below their stated qualifications.

12. The incoming refugees can add to the pool of low-qualified labor competing for the limited number of low-skill local jobs. Over 40 percent of Luxembourg’s unemployed have only primary education. These people are struggling to find employment in the sophisticated Luxembourgish economy that creates more jobs requiring advanced academic degrees and professional qualifications. They are competing with cross-border workers and are often deterred by “inactivity traps” created by the generous welfare system that blunts their incentives for proactive job search and re-training.8

13. Challenges of enrolling refugees in the labor market may call for extending to them the available promotion programs, including those designed for the long-term unemployed. By the time asylum seekers reach their new host countries after a long and perilous journey and get through the asylum application process to job authorization, they have often had been out of a permanent legal job for more than a year. This can be roughly estimated by adding the travel time (at least 2–3 months), the time from the asylum application to the job authorization (recently cut from 9 to 6 months in Luxembourg), and the stay in refugee camps after leaving their home countries. Their educational and professional characteristics resemble those for the long-term unemployed, which calls for special efforts for their labor market integration. As creating special employment regimes for refugees can undermine social cohesion, enrolling them in pre-existing programs available to local unemployed should be more acceptable.

14. Employment promotion programs administered by the Luxembourg’s public employment service (ADEM) could be extended to refugees. ADEM emphasizes a personal approach to the needs of job seekers. Its menu of options for the long-term unemployed includes apprenticeship and learning-through-doing programs, subsidized temporary employment, and retraining courses. In addition, ADEM promotes special programs for the young (including the “Youth Guarantee Scheme”) and people with partial disabilities and medical pre-conditions. These programs, in combination with the robust economic growth, have set Luxembourg’s unemployment rate on a declining path in 2015.

15. Further labor market reforms could help address the root causes of structural unemployment and facilitate insertion of refugees in the labor market. As highlighted in the IMF Staff Discussion Note on the refugee surge in Europe, a high statutory minimum wage may prevent hiring of low-skilled workers, who are overrepresented among refugees. This may justify granting temporary and limited exceptions from the minimum wage for both refugees and the long-term unemployed, including through wage subsidies. Removal of barriers to employment and increasing flexibility of hiring and firing decisions for firms would help as well. The unemployment benefits could be modified to increase digressivity for the long-term unemployed and encourage acceptance of available vacancies so as to break “inactivity traps” and motivate proactive job search. In addition, Luxembourg can consider further reducing below 6 months the time between the asylum application and the work permit granted to refugees, which would allow them to work while their application is being considered. Moreover, re-training programs should focus on equipping the long-term unemployed and refugees with the skills most in demand in the economy to address skills mismatches manifested in rising number of available vacancies along with the increasing unemployment rate over the last 15 years.

See “Addressing Disincentives to Work” in the Selected Issues for the 2014 Article IV Consultation, pages 14–17.

The author thanks Marco Schockmel from the Luxembourg’s Central Service for Statistics and Economic Studies (Statec) for providing the data.

(Percent of GDP, average over the period)

(In percent of active population)

Wage Difference Between Natives and Migrants 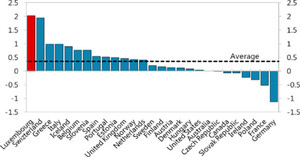 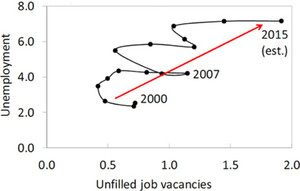 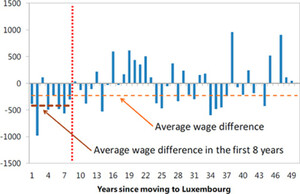 Wage Differences Between Native and Migrants Across Sectors