A. Minimum Wage Setting in Romania

Sources: Eurostat; and Ministry of Labor.

B. Minimum Wage Developments and Its Interactions with Relevant Macroeconomic Variables

3. Minimum wage increases in Romania are among one of the steepest among European peers since 2005. Although the minimum wage in national currency and euros remain low, the speed of the increase in minimum wage in both nominal and real terms for Romania is far greater than EU peers. Minimum relative to average wage ratio for Romania had always been among the low-end group, but will likely top the regional average with the planned increase in 2016.

4. Minimum wage policy might have helped to reduce income inequality in Romania, whereas the poverty risk declined only slightly. During 2006–14, minimum relative to average wage rose by about 8 percent, and the Gini coefficients declined by around 2.8 percent. A simple correlation between the minimum to average wage ratios and Gini coefficient at the same period was negative and particularly strong for Romania. The income gaps measured by the ratio between the highest and the lowest income deciles also reduced from 14.7 times in 2006 to 13.4 times in 2014. Nevertheless, the poverty rate declined only slightly with the minimum wage increases during 2006–14 and the two appeared to be uncorrelated.

7. The increase in minimum wage could improve economic equality but may also have potential negative impacts. The Romanian government introduced the active minimum wage policy as part of measures to tackle poverty. On the upside, minimum wage increases may help to reduce wage gaps and improve income inequality. The minimum wage increase and its ripple effect across wage distribution will give boost to short-term consumer spending. Minimum wage increase may incentivize low-paid workers to work in the formal sector, but this impact is not obvious as at the same time it may give rise to envelope pay to circumvent the minimum wage increase. On the other hand, minimum wage hikes could push average gross wages and labor costs. Increased wages and labor costs could undermine external competitiveness and export performance, while hampering potential foreign direct investment that could benefit low skilled labor. Minimum wage is, in principle, a wage floor. If the floor is set too high, it could affect firms’ profitability and discourage employers from hiring, particularly among directly affected group. Should the employment effect be intensified, the increase in unemployment may affect family income among low-paid group and in turn lowered income would have the repercussion effect on the poverty level. The following sections analyze the economic impacts of minimum wage increases in Romania in more details.

(In lei, unless otherwise indicated)

(In lei, unless otherwise indicated)

11. The impact of minimum wage policy on poverty reduction is less clear. Since the risk of poverty is higher among the low paid, reducing the number of low-paid workers may help to reduce working poverty. On Romania, the risk of in-work poverty or social exclusion slightly declined as minimum wages increased. Nevertheless, the causality of the minimum wage as policy instrument to reduce poverty would require more granular data analysis to pin down the effect. In fact, the empirical findings in the area are found controversial. CBO (2014) found the income of families whose income is below or close to the poverty threshold would rise significantly, while the income of richer families would decrease. Yet, Neumark and others (2005) mentioned that an increase in minimum wage raised the incomes of some poor families, but minimum wages appeared to increase the proportion of families that are poor or nearly poor due to the disemployment effect. Further to this, IMF (2014) and Neumark (2015) noted a large share of the higher income from minimum wages flows to higher-income families as minimum wages rise. Such findings point to the efficiency and equity concerns of minimum wage policy.

12. Minimum wage policies can affect gross wages through the wage redistribution and play a signaling role at the economy-wide wage setting. This study utilizes the panel VARs technique to estimate the reduced-form wage-setting system.4 The dynamics of such pass-through can be characterized by the resulting impulse response of minimum wage increase on average gross wage growth. The pass-through is estimated at about 0.01–0.15 percent increase in real average wage growth in response to 1 percent increase in real minimum wage over two years. The result indicates a minimum wage shock could have a significant and long-lasting effect on the overall wage growth. One explanation is that during 2011–16, several CESE countries have actively used the minimum wage policy, and the minimum relative to average wage ratios in many CESE countries rose remarkably to 45–50 percent from mid-30 percent range in the past decade. The share of minimum wage earners may have increased significantly. Therefore, minimum wage hikes could potentially blow stronger ripple effects across the wage distribution above minimum wage.

15. Nonetheless, some negative impacts on employment of youth and low-skilled could be expected, particularly in countries with high relative minimum wage. Staff’s analysis (IMF, 2016) illustrates the employment impact of minimum wage increases on youth employment at different levels of minimum-to-average wage ratios for 17 CESE countries using data from 2000 to 2014. The study finds that some negative employment effects start to materialize when minimum to average wage ratio exceeds 40 percent. The effects could potentially enlarge toward higher minimum-to-average wage ratios, reflecting its non-linearity nature. In addition, staff’s estimates based on firm-level data for eight CESE countries indicate the increase in minimum wage would result in a decrease in firms’ employment, particularly among firms in tradable sector.

16. Sharp minimum wage hikes could undermine external competitiveness. High level of minimum wage that passes on to overall wages and labor costs would deteriorate the country’s competitiveness, especially when wage growth is already outstripping productivity growth. Export performance could be jeopardized (Rahman and others, 2015, see Appendix II). Specifically, the estimates suggest the value-added exports of goods and services particularly to EU will likely decline by 0.083 percent for 1 percent increase in minimum relative to average wage ratio. Rising labor costs may also deter foreign direct investment which otherwise would have created jobs. Furthermore, sharp and sudden increases in minimum wage could affect firms’ profitability particularly for firms in tradable sector. For the period of 2009–13, when minimum wage increases were smaller, firm-level analysis reveals that tradable sector firms appear to absorb higher labor costs. They experience somewhat lower profits and employment growth, as they restrain to increase prices and lose competitiveness. However, the impact of the currently larger increases of minimum wage are uncertain and worth monitoring (IMF, 2016).

17. International experiences suggest the minimum wage fixing should balance social considerations with potential negative impacts from minimum wage hikes. The International Labor Organization (ILO) convention on minimum wage fixing (1970) suggests several elements to be taken into consideration in determining the level of minimum wages: (a) the needs of workers and their families; and (b) economic factors including the requirements of economic development, levels of productivity and the desirability of attaining and maintaining a high level of employment. To tackle poverty in particular, minimum wages may need to be combined with other policies to be effective.

18. Future decisions on minimum wage need to be carefully crafted. The pace of future minimum wage increases should be moderate and balance social considerations with competitiveness, productivity growth, and employment prospects. As minimum-to-average wage ratios in Romania are already higher than in peers, the economic effects could weigh on Romania’s perceived competitiveness in the region. Hence, future minimum wage adjustments could usefully be based on a transparent and clear mechanism and avoid unsustainably rapid increases to shun adverse effects. Minimum wage in Romania is determined at the national level by the government after consulting trade unions and employers’ organizations. It is important to ensure sufficient representation from many low-wage sectors representing the interest of the group affected by the minimum wage. Finally, periodic assessments of the impact of labor market policy including minimum wages by labor market expert committees could usefully inform future policy decisions.

Prepared by Piyaporn Sodsriwiboon (EUR). The author thanks the discussants and participants at the seminar organized by the National Bank of Romania for their helpful comments, as well as staffs at IMF resident representative office in Romania for their excellent support on this research.

Subject to data availability, it would also be interesting for future research to further analyze the public-private wage inequality in Romania. Voinea and Mihaescu (2012) find significant public-private wage premiums. Persistent increases in minimum wage or public wages regardless of productivity improvement could potentially be counterproductive and crowd out productive labor force in competitive sector.

Yt is the stacked version of yit, which is the vector of change in real average wages, employment growth, real labor productivity growth, change in term of trade and change in real minimum wages for each country i=1,2,…,N. The choice of variables follows Blanchard and Katz (1999) and Goretti (2008). All variables are in real terms using change in consumer price index as a deflator. Data are quarterly from 1995q1 to 2015q2. Panel is unbalanced. Lags included are chosen to minimize the information criterion statistics. The system is estimated using GMM method.

In line with the previous setting, the analysis draws on VAR framework for Romania at the overall wages as well as for wages by key economic sectors including industry, construction, service, and IT sectors. Yt=A0(t)+A1(l)Yt–1+utt=1,2,..,T and Yt is the vector of change in real average wages, employment growth, real labor productivity growth, and change in real minimum wages. Data are monthly from 2005m1 to 2015m7. Lags included are chosen to minimize the information criterion statistics. The system is estimated separately for each analysis.

The pass-through effect on gross wage for Romania is estimated at around 0.45 percent to 1 percent increase in minimum wage.

(Workers at or below minimum wage in percent of total workers in each sector, data as of 2013)

Arguments For and Against Minimum Wage Increase

(Real annual wage in Lei, each dot presents minimum wage for each year)

(The response of average wage to 1 ppt increase in minimum wage, panel VAR model for 14 CESE countries during 2010q1-2015q2) 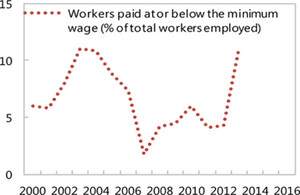 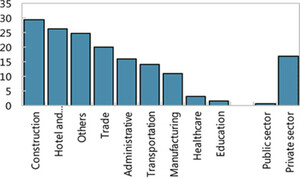 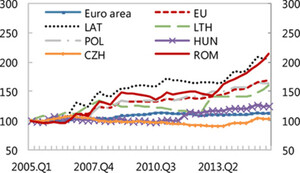 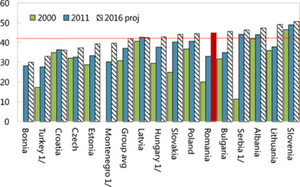 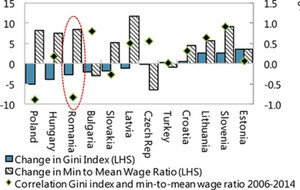 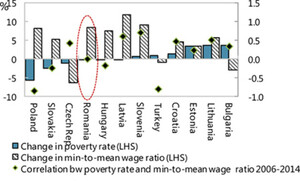 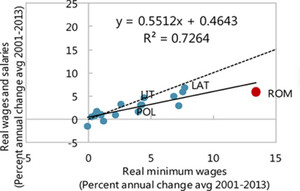 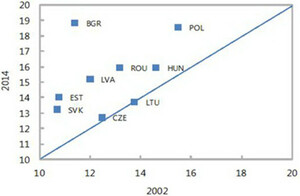 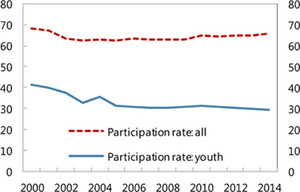 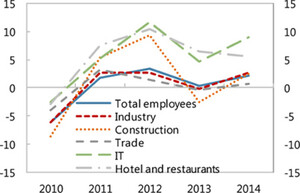 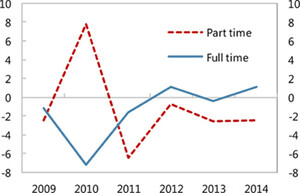 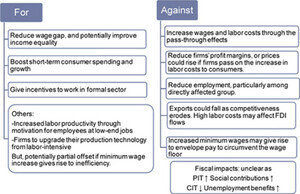 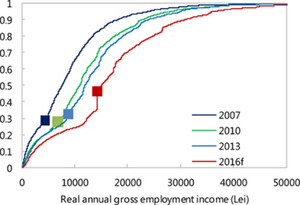 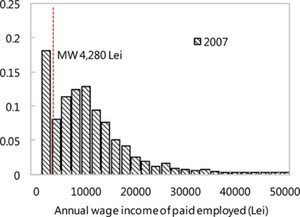 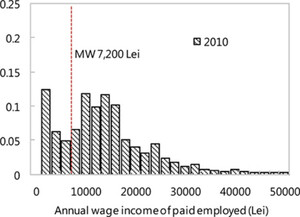 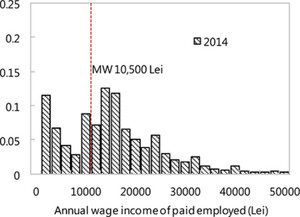 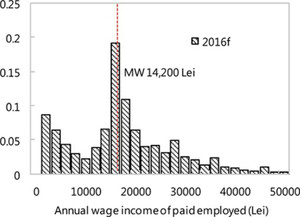 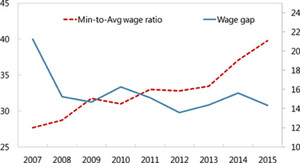 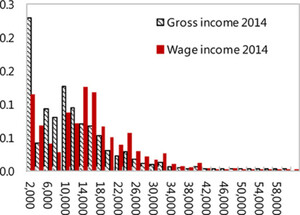 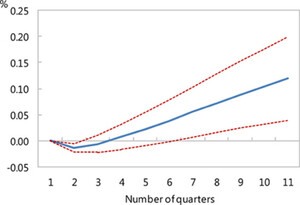 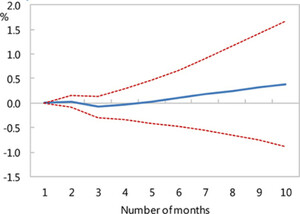 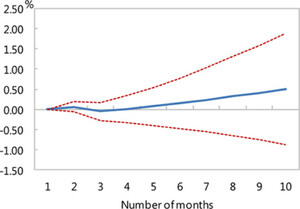 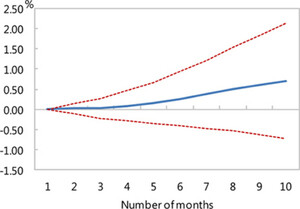 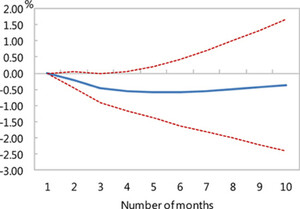 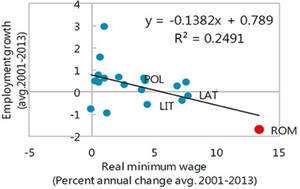 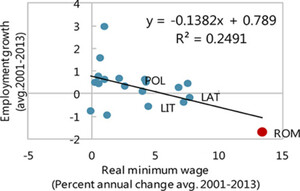 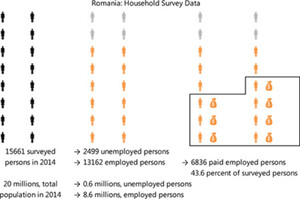 Determinants of Export Performance in NMS