After a decade of strong economic growth following the 2001-crisis, Turkey has experienced a slowdown in growth since 2012. A central question is to what extent this is a cyclical phenomenon or whether potential output growth has slowed. This Selected Issues Paper finds that after several years above 4 percent, potential output growth slowed during the global financial crisis and has remained lower since then. In the early 2000s, the main driver of potential output growth was total factor productivity growth. During the mid-2000s this was replaced by strong capital growth rates, and from 2008 also higher potential employment growth—mainly as result of growth in the female labor force participation rate. Going forward, potential employment growth and capital growth are expected to contribute less than during 2008–14, with capital growth likely constrained as access to financing from abroad could become more challenging. We therefore expect that potential output growth from 2015–20 will be lower at 3–3½ percent. Importantly, with labor and capital contributing less than from 2008–14, maintaining such growth rates, requires a return to positive total factor productivity growth and continued access to external financing to finance investment unless domestic saving increases. Reforms that can increase future potential growth include policies to increase the domestic savings rate and the low female labor force participation rate as well as reforms that allow the convergence of total factor productivity to the level of advance economies to speed up.

A. What is Potential Growth?

4. The estimates show a slowdown in potential output growth since before the global financial crisis. For 2007–20 the estimate of potential GDP growth using the multivariate filtering technique gives similar results as the trend GDP growth rates obtained from a simple Hodrick-Prescott (HP) filter using only data on real GDP. Both approaches show that potential output growth slowed to 3 percent in 2009, then rebounded to around 4 percent from 2010–13 (see text chart), and slows to 3–3½ percent from 2014. However, estimates for future potential growth rates are highly sensitive to staff’s projections for actual real GDP growth, which show medium term growth of about 3½ percent. For the period 2003–06, the HP filter shows about one percentage point higher potential output growth rates compared to the MVF approach.

5. To determine the main drivers of potential output growth, a production function approach is applied. Potential output, as estimated in section B, is assumed to be a (Cobb-Douglas) function of total labor and capital input in production as well as their total factor productivity (TFP):

is potential output and is obtained from the filtering technique discussed above. K is the capital stock, which is obtained from the OECD data. is potential employment. Ā is potential TFP, which is obtained as the residual from the production function. α is the share of capital in the production, which we set at 0.5. This is in line with the findings of e.g., Chen (2010) for developing economies and Ungor (2014), Altuğ and others (2008), Ismihan and Metin-Özcan (2009), and Tiryaki (2011) for Turkey. Potential employment is a function of working age population, labor force participation, and the structural unemployment rate (NAIRU):

6. In the early 2000s potential output growth was strong and driven by high TFP growth. From 2001 to 2004, potential output growth increased from 3 percent to 5 percent. Capital growth was low as result of a low level of investment in productive capital at around 9 percent of GDP2. And with the contribution from potential employment also limited in those years, the main driver of the higher potential growth was TFP growth, which contributed 3–4 percentage points. However, part of the reason for the strong TFP growth following the 2001 crisis was also that capacity utilization—which is not taken into account explicitly and therefore included in TFP—increased strongly from 70 percent in 2001 to 80 percent in 2004.

7. During the mid-2000s, potential output growth remained high but its composition shifted from TFP growth to capital growth. Investment in productive capital almost doubled as a share of GDP and reached 15 percent of GDP in 2005–06; capital growth went from contributing ½ percent in 2003 to over 3 percent in 2007–08. As the domestic savings rate did not increase during these years, the higher level of investment in real productive capital was financed solely from abroad—the current account thus went from balance in 2002 to a 6 percent of GDP deficit in 2006. With potential employment growth roughly stable from 2002–07, the sharp increase in the contribution from capital growth implies that the contribution of potential TFP growth slowed in the run-up to the global financial crisis.

8. Potential output growth started to decline in 2006, declined further going into the global financial crisis, and has remained lower since—mainly as result of lower potential TFP growth. Investment, and thereby capital stock growth, quickly rebounded following temporary slowdown in 2008–09. Potential growth was further supported by strong growth in potential employment with labor force participation increasing from 46 percent in 2007 to 50 percent in 2013—this was the result of a sharp 7 percentage point increase in female labor force participation (and the female employment rate). With both capital and labor growing strongly on average from 2006–14, the slowdown in potential output growth can be exclusively attributed to declining TFP growth—as shown in IMF (2015) slower TFP growth since the global financial crisis is a general pattern for EMs (excluding China).

Potential Output Growth and Its Drivers, 2002-20

Potential Output Growth and Its Drivers, 2002-20

11. The overall labor force participation rate declines slightly after 2017 as result of overall population ageing. The share of the 55+ year olds in the total population—who have a low participation rate—increases, whereas the share of the 15–34 year olds declines. Together with United Nations estimates of the future working age (15+ years old) population—which show a 1–1½ percent annual growth on average from 2015–20—and the NAIRU estimates from the MVF, this gives a more modest potential employment growth from 2015–20 than what was observed from 2008–14.

12. Capital growth is expected to contribute less than during the last decade. After the increase of the investment rate in the early and mid 2000s—mainly financed through higher current account deficits—capital growth remained high until 2011 only interrupted by a brief slowdown in 2009. However, after investment peaked at 16 percent in 2011, it has stagnated and as a share of GDP slowed to less than 14 percent in 2014. Staff expects the investment rate to decline slightly as the 1 percent of GDP narrowing of the current account between 2014 and 2020 is not expected to be driven by increased domestic savings. Only if the external financing environment allows for an increased level of investment or if structural reforms or fiscal consolidation succeed in raising the domestic savings rate will the capital growth be able to contribute further to potential output growth.

13. TFP growth is assumed to increase compared to recent years but remain lower than during the early 2000s. As has been the case in EMs in general (excluding China) TFP growth has been on a declining trend since the beginning of the global financial crisis. We assume that TFP growth will increase from its negative contribution since the beginning of the global financial crisis but remain lower than during the rapid convergence experienced during 200–205. Turkey’s per capita income leading up to this episode was less than 10 percent of that of the United States and increased strongly to 20 percent by 2008 and has remained at that level since. While this gives some justification why the convergence speed is likely to be lower going forward than in the early 2000s, any estimate of future potential TFP growth is highly uncertain.

E. How Can Turkey Achieve a Higher Potential Output? And What Could Cause it to Slow Down?

16. Reduced access to external financing (due to Fed tapering and/or re-assessment of country specific risks), could lead to lower future potential output growth. A current account deficit of [2.9 percent] stabilizes Turkey’s negative net foreign asset position according the Fund’s external balance assessment (EBA). However, this is based on a medium term growth rate of 3.5 percent. As shown by IMF (2014), if the current account adjusts through restricted access to foreign funding (a higher external financing premium), lower investment would be the main source of adjustment. Lower investment leads to lower potential growth, which implies that a lower current account deficit can be sustained. The necessary reduction of the current account deficit to stabilize net foreign assets, if the adjustment happens solely through reduced investment, is about [three] percent of GDP. Such an adjustment would lead to an annual potential growth rate that is 0.5 percentage points lower on average from 2016–20.

17. A return to positive total factor productivity is necessary to maintain potential growth rates above 3 percent. Since the beginning of the global financial crisis, TFP growth has contributed negatively to potential growth. If TFP growth from 2016–20 does not return to ½–1 percent growth as assumed, but instead stays at zero growth, and at the same time access to financing disappoints, the potential growth rate could fall to just over 2 percent on average from 2016–20. With per capita income of around $10,000 Turkey still has potential to maintain growth rates well above those of advanced economies. Reforms to speed up this convergence process could help increase potential output growth. The 10th development plan lays out some broad goals for this such as increased spending on R&D, infrastructure, education, and innovation, etc. However, these policies are yet to be implemented and the extent to which it is possible to significantly boost total factor productivity growth remains uncertain and will likely take time.

18. The slowdown in economic growth in recent years is partly a result of lower potential output growth. Estimates of potential output growth show a slowdown since the mid-2000s and lower realized economic growth is thus driven mainly by a slowdown in potential growth rates. Output for 2014 is (in staff’s view) close to its potential level and the persistent high inflation in an environment with declining commodity prices also indicates that the output has not fallen significantly below its potential. In addition, with the current account still elevated, higher growth rates will be unsustainable as they would lead to further build up of the external imbalance.

19. The structural slowdown can only be addressed through structural reforms to increase total factor productivity growth, national savings, and the female labor force participation rate. Cyclical stimulus to boost output from fiscal and monetary policy should be avoided as this would lead to unsustainable growth. Higher domestic saving—through policies to increase private or public saving—is necessary to help avoid that a correction of the external imbalance happens through a drop in investment. With inflation well above target, monetary policy should focus on bringing inflation back to target. Expansionary fiscal and/or monetary policies should only be considered if the economy falls into outright recession, with output falling to a level significantly below potential. Addressing the recent slowdown therefore calls for policies to increase potential growth. While this is challenging, policies to boost female labor force participation, increase domestic saving to allow for a higher (or at least maintain the current) investment rate, and structural reforms that help faster convergence of total factor productivity provide opportunities to increase Turkey’s growth potential.

As a measure of productive capital we use private and public investment in machinery and equipment from the national accounts data (i.e., construction investment is excluded).

Investment in productive capital was 60 percent of total investment on average from 2012-14 (and also around 60 percent in most years for the last 10 years).

(Percent of total population over age 15)

Capital Growth and its Components 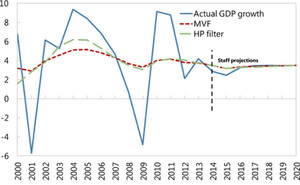 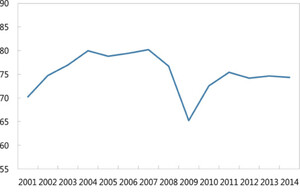 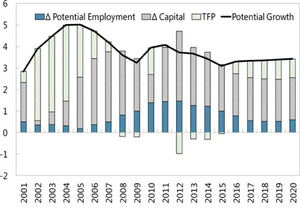 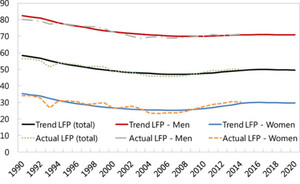 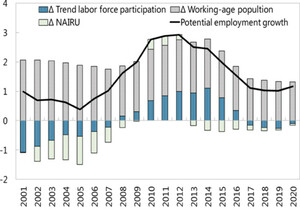 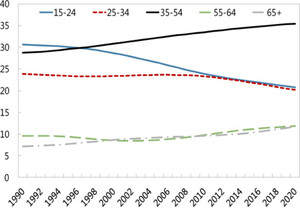 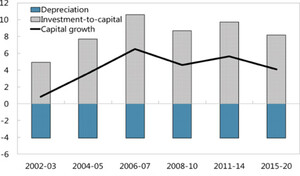 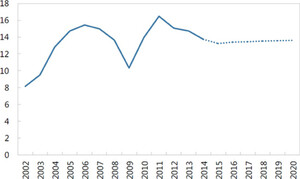 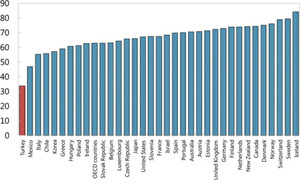 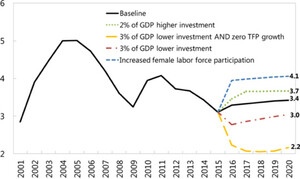