Turkey’s Increase in The Minimum Wage for 20161

The minimum wage increased by 30 percent in January 2016, affecting around 8 million workers directly. Despite the government subsidies, the overall wage bill is estimated to increase by 0.7 percent of GDP. Yet, the impact on employment could be mitigated by the large informal labor market; the increase will be also partially eroded by inflation over the coming years. The fiscal cost of the subsidy will be around 0.56 percent of GDP, but the net fiscal cost is estimated to be smaller once the increase in revenues from indirect taxes and pension contributions are taken into account.

3. About 8 million workers will be directly affected by the increase, but many more will be affected indirectly. Data from the social security institution suggest that about 8 million formal workers earned wages below the new minimum wage threshold. The increase will also put pressure to raise the wage of workers above the threshold, albeit significant more bunching of wages along the minimum wage is expected. In relative terms, the minimum wage increase will affect more women than men in the formal sector, as 65 percent of the female workers have a salary below the new minimum wage, while the share for male workers is at 61 percent. While the proportion of minimum wage earners is similar, for women the distribution of wages is bunched closer to the minimum wage. However, almost half of women are employed in the informal sector, compared to only about 30 percent of men. This implies female workers will be less affected if the minimum wage increase affects the informal labor market less.

A. Implication on Wages and Labor Costs

4. Social security contribution, unemployment insurance, personal income taxes, and stamp taxes affect net wages and labor costs. For minimum wage earners, the minimum wage increase will result in a higher net salary, but also in higher contributions to the social security and higher personal income taxes. The government subsidy largely returns those extra earnings to limit the impact on labor costs. To calculate this impact it is necessary to understand the impact of taxes and contributions:

5. In order to analyze the impact on the labor market, we use data from the Turkey Social Security Institution (SGK). The data contains information on the distribution of the number of insured person by insurable earning levels. However, this dataset has three important limitations: (i) the last available data is for 2014; (ii) the data has a truncated distribution at the right tail due to the cap on social security contributions (at 6.5 times the minimum wage), and (iii) it covers only formal workers. Therefore, to construct the distribution for 2015, we assumed that wages increased by the inflation rate, and that the relative wage distribution remained unchanged.

6. We estimate that the share of workers with minimum wage will increase to about 58 percent of the total formal workers. For this, we constructed a cumulative distribution function (CDF) for the wage bill in 2016. First, we inflated the 2015 wage bill by 11 percent; this gave us a baseline for the wage distribution for 2016. The 11 percent was chosen, because this is the agreed wage increase for public sector employees for 2016. Then workers with gross wages at or below the minimum wage were set at TL1647. Figure 1 illustrates the cumulative distribution of workers and wage bill over different real insurable earning levels that are normalized with the 2015 minimum wage. The left panel shows the CDF assuming no policy change, and the right panel shows the CDF with the minimum wage policy—and our implicit assumption that the increase in minimum wage does not trickle to wages above the minimum wage, which implies that the number of workers on the brackets above the new minimum wage remain unchanged.

Turkey: Impact of the Minimum Wage Increase and Government Subsidy

(change from the baseline in percent of GDP unless otherwise stated)

Note: Changes are estimated with respect to a baseline that assumes an 11 percent increase in nominal wages.
Table 1.

Turkey: Impact of the Minimum Wage Increase and Government Subsidy

(change from the baseline in percent of GDP unless otherwise stated)

Note: Changes are estimated with respect to a baseline that assumes an 11 percent increase in nominal wages.

9. The subsidy will also lower the costs of employing mid-skill workers. The labor costs for those not directly affected will actually decline due to the subsidy. While there might be some trickling up in wages, under reasonable assumptions the subsidy will reach workers that will likely face little impact from the minimum wage increase.

B. Implication on the Labor Market

10. The literature seems to have concluded that the impact of minimum wages on employment is small in advance economies. Freeman (1996) stated that “—debate over the employment effects of the minimum wage is a debate of values around zero.” Yet, the debate remains lively on whether the impact is negative or insignificant, particularly for the small group of people for which the minimum wage is binding—typically the youth and low skill workers. Card and Krueger (2001) found no evidence of the rise in minimum wage reduced employment of low skill workers in the fast-food industry in New Jersey. Yet, Neumark and others (2014) have challenged this view suggesting minimum wages would cause job losses for the lower-skilled workers. Several explanations have emerged to reconcile these empirical observations with theory. One possibility is that the effects of minimum wage could be felt through other channels including non-wage benefits or training, as firms tend to be reluctant to layoff existing labor.

12. Studies on the impact of the minimum wage on the Turkish labor market have shown mixed results. Using the Household Labor Force Survey for 2002–2005, Papps (2012) found that a 1 percent increase in labor costs resulting from an increase in the minimum wage leads to a 0.13 percent fall in the probability of remaining employed in the following quarter, and that the impact is stronger for young and rural workers. These results are qualitatively similar to those obtain from simulations using the IMF GIMF model, a calibrated DSGE model, which suggests that a 1 percent increase in the real wage markup—over labor productivity—would lead to an increase in unemployment of about 0.3 percent two years after the shock. On the contrary, using data from 1996 to 2006, Korkmaz and Coban (2006) found that the long run relationship between minimum wage and unemployment is statistically insignificant. Moreover, Pelek (2011) found no effects on low-skilled youth employment.

13. In Turkey, several factors mitigate the possible impact on employment. The high share of employees whom are hired at or around the minimum wage (around 30 percent in 2014) suggests the impact should be large. However, the informal sector—which accounts for about 35 percent of total employment—is large and able to absorb a significant share of workers, such that the increase in minimum wage may have little effect on the overall employment—but result in a significant increase in informality.

15. In light of all these factors, we see the impact on labor market from the recent raise in minimum wage may be small. In part, because the higher minimum wage would boost the spending power of the low-income workers leading to higher private consumption. However, there could be a significant surge in informality, at least temporarily, which could have adverse effects on productivity and increase fiscal costs. This would allow firm to reduce the impact from the policy change, while retain its employees. In addition, the structural of the subsidy “distorts” the labor skill premium by making the middle skilled workers (ones who are earning between TL1670–2550) cheaper compared to the low-wage and high wage earners.

Turkey: Impact of the Minimum Wage Increase and Consumption

Assuming a coefficient of 0.9 on the propensity to consume.

Turkey: Impact of the Minimum Wage Increase and Consumption

Assuming a coefficient of 0.9 on the propensity to consume.

16. The raise in minimum wage would raise aggregate demand over the short run, while having negative impacts on the supply side. Given the high marginal propensity to consume for the low-wage earners, they are very likely to spend a high share of the increased wages at 0.9 percent of GDP. Yet, the cost of the higher minimum wage, at 1.3 percent of GDP amounts to about 1/3 of firms’ profit.3 Assuming no major lay off the existing workers, firms essentially have three options to absorb the raising costs.

17. The increase in indirect taxes, social security contributions, and the limited increase in personal income tax thresholds will partly offset the direct fiscal costs due to the employment subsidy. The minimum wage increase will have a negative effect on the personal income tax due to the minimum living allowance, albeit it will be largely compensated by a modest increase in the PIT thresholds. It will boost contributions to the social security and the unemployment insurance fund, as well as indirect taxes—partially compensating the fiscal cost of the subsidy. Below are some rough estimates of the fiscal costs.

Impact of the Minimum Wage on Indirect Taxes

Impact of the Minimum Wage on Indirect Taxes

18. Fiscal costs would be larger to the extent that the minimum wage leads to an increase in informality. The previous estimates assume that employment and formality remain unchanged. To the extent that informality increases, the fiscal cost would increase by about 0.02 percent of GDP for every percent increase in informality. This is likely a lower bound as it assumes that workers will just be relocated to the informal sector earning their previous salary and therefore limiting the impact on indirect taxes. It also assumes that the move to informality results in a proportional loss of CIT with respect to the 2015 level.

The fixing board consists of representatives from employees, employers and the government, and the size of the increase is aligned with the AK Party campaign promises for Turkey’s general election of November 2015.

To derive the total non-financial corporate profits as share of GDP, we assume the ratio between net profit and total asset to be 2.8 percent, which is consistent with what the CBRT’s firm level data suggests.

Change in the Minimum Wage

The Cumulative Distribution of Employees and Wage Bill over Wage Brackets

Ratio Between Minimum and Average Wage 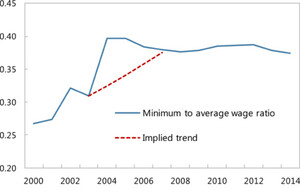