This paper examines the state of inclusion in the WAEMU along three dimensions: poverty, income inequality, and gender inequality. It shows that, while WAEMU countries have made progress along these dimensions, this progress was generally slower than in a group of African and Asian benchmark countries which have experienced much faster real GDP per capita growth than the region in the last decades. The paper finds that, while infrastructure scaling up, increasing human capital investment and building institutions remain priorities for WAEMU countries, these policies should be complemented in particular by efforts to close gender gaps in opportunities, such as in education and health, and granting the same legal right to women as for men. Improving these indicators to levels of Asian benchmark groups could boost annual real GDP per capita growth by on average 1 percentage point. This effect supplements the large and positive effect of more equal opportunities on growth through overall education levels and income inequality.

1. There is robust evidence that higher income inequality can impede growth. Lower net income inequality has been associated with faster and more sustained economic growth in both advanced and developing countries (Berg and Ostry 2011; Ostry and others 2014). With imperfect credit markets, income inequality prevents an efficient allocation of resources by decreasing poorer households’ ability to make investments into human and physical capital (Galor and Zeira 1993; Corak 2013). Higher income and wealth inequality can also lead to socio-political instability and poor governance, thus discouraging investment (Bardhan 2005).

2. The evidence that gender inequality is impeding economic growth is also growing (Figure 1). Gender inequality has been associated with worse growth and development outcomes (WEF 2014; Elborgh-Woytek and others 2013; IMF 2015, Gonzales and others 2015b). Gender gaps in economic participation restrict the pool of talent in the labor market and can yield a less efficient allocation of resources (Cuberes and Teigner 2015), lower productivity (Loko and Diouf 2009) and hence lower GDP growth. Since women are more likely than men to invest a large proportion of their household income in the education of their children, higher economic participation levels and earnings by women translate into higher expenditure on school enrollment for children (Duflo 2012; Heintz 2006; Miller 2008, Rubalcava and others 2004; Thomas 1990). IMF (2015) highlights reductions in gender inequality as one of the most promising avenues to boost growth in the region – together with closing gaps in infrastructure and education. It shows that decreasing income and gender inequality in sub-Saharan African countries to levels observed in the ASEAN 5 (Indonesia, Malaysia, the Philippines, Thailand and Vietnam) could increase real GDP per capita growth by about 1 percentage point on average.

3. This paper examines to what extent income and gender inequality have contributed to the WAEMU’s growth shortfall compared to other regions. It proceeds as follows: First, we benchmark poverty, income inequality and gender inequality measures against two groups of countries which had similar GDP per capita levels two decades ago, but since then have experienced significantly higher growth levels than the WAEMU. Staying consistent with the previous Article IV consultation, the group of African benchmark countries includes Ghana, Kenya, Lesotho, Rwanda, Tanzania, Uganda, and Zambia. The group of Asian benchmark countries includes Bangladesh, Cambodia, India, Laos, Nepal, and Vietnam. Respectively, these two groups have experienced around 2½ and 3½ percentage points higher real GDP growth compared to the WAEMU in the last decade. Secondly, this note quantifies to what extent higher income inequality and gender inequality have contributed to the growth differential between the WAEMU and these groups. To highlight the upside potential of gender and distribution-friendly policies, we additionally use a group of the five fast-growing ASEAN countries—Indonesia, Malaysia, Philippines, Thailand, and Vietnam—as a more ambitious benchmark. Finally, policy recommendations and conclusions highlight possible areas for action.

5. The picture with respect to income inequality trends is mixed. Figure 2 also highlights the trends in income inequality in the WAEMU and other countries. It shows that income inequality as measured by the net gini coefficient (100 means perfect inequality, and 0 means perfect equality) has declined in several countries (Burkina Faso, Guinea-Bissau, Mali, Niger, Senegal). However, the gini coefficient has increased in Cote d’Ivoire, and in Guinea-Bissau the decline has likely resulted from an increase in poverty rates (decrease in income for some parts of the population decreasing the gini coefficient). The top 10 percent earners’ incomes makes up for one-fourth to 35 percent of total income across WAEMU countries, while the top 20 percent earn from two-fifths to over one half of total income. In contrast, the bottom 10 percent only earn 2 to 4 percent of total income.

7. This is particularly worrisome since at the global level, countries with high gender inequality have a less equal income distribution, are poorer and grow more slowly (Figure 3, charts, 2 to 4). The following paragraphs highlight the developments in the gender inequality index’ main components.

9. WAEMU countries are also outperformed by benchmark countries in educational equality between boys and girls as well as in health indicators (Figure 5). Adult literacy rates are generally lower in most WAEMU countries as compared to benchmark groups, but they remain particularly low for women. Gender gaps in primary education have shrunk but are not closed in the majority of WAEMU countries. In Benin, Cote d’Ivoire, Mali, and Niger less than 9 girls are enrolled in primary education for every 10 boys, implying that these country lag behind the millennium development goal that girls and boys alike can complete a full course of primary schooling in 2015. Only 7 girls are in secondary education for each 10 boys, and women are less than 50 percent as likely to be enrolled in tertiary education. Health indicators remain poor in several WAEMU countries: The risk of maternal death is much higher in WAEMU countries, especially in Mali and Niger, as compared to the benchmark groups, so are adolescent fertility rates.

10. Finally, women face a number of legal restrictions in the region. There are several laws on the book in WAEMU countries’ which impose gender inequalities. Legal inequities between men and women have been shown to put a heavy toll on women’s labor force participation, and thus growth (Gonzales and others, 2015a). According to World Bank (2015), in at least half of the WAEMU’s countries women cannot be the head of a household the same way as men, and in none of the WAEMU countries does there exist legislation which prohibits discrimination in access to credit based on gender. In Niger, where female labor force participation is particularly low, there are restrictions on women getting a job the same way as men. In Cote d’Ivoire and Senegal, there are differences in property rights between men and women. In at least half of the countries, women are not protected legally from domestic violence.

11. Given that income inequality in the region is a concern, and that gender inequality is among the highest in the world, this section tries to answer whether these inequalities had an impact on economic performance in the region. We follow the approach taken in IMF (2015) to decompose the differences in average real GDP per capita growth rates in the WAEMU and two benchmarks: a group of African benchmark countries (Ghana, Kenya, Lesotho, Rwanda, Tanzania, Uganda, Zambia) and a group of Asian benchmark countries (Bangladesh, Cambodia, India, Laos, Nepal, and Vietnam) which have experienced around 2½ and 3½ percentage points higher real GDP growth compared to the WAEMU in the last decade.

12. We find that the WAEMU’s real GDP per capita growth could significantly benefit from realistically implementable decreases in gender and income inequality (Figure 6). The results of this approach reveal, that, in addition to large effects on growth from overall educational and infrastructure gaps, income and gender inequality can explain around 0.5 percentage points of the WAEMU’s real GDP per capita income shortfall compared to the Asian Benchmark group. The effect for a reduction of gender inequality and legal inequality to the level observed in the five fast- growing ASEAN countries (Indonesia, Malaysia, Philippines, Thailand, and Vietnam) alone could boost real GDP per capita rates by 1 percentage point.

13. The magnitudes of these effects vary across WAEMU countries (Figure 7). While income and gender inequality have on average significantly contributed to the growth short fall of the WAEMU relative to benchmark groups, the magnitudes of the effect vary. For instance, in Burkina Faso, income and gender inequality have been lower than in benchmark groups which has positively affected growth in Burkina Faso vis-à-vis the benchmarks. In Mali and Niger, with a high share of the population living in poverty, income inequality is relatively low. However, gender inequality is high in absolute and relative terms in Niger and Mali. In particular, in Mali, a reduction of gender inequality and an increase of legal equality between men and women to the levels observed in the ASEAN-5 alone could have resulted in a boost of the real GDP per capita growth rate of 1¼ percentage points of GDP.

14. The regressions confirm existing policy priorities. The results highlight that decreasing income inequality and gender inequality may not only be desirable from a political preference or human rights perspective but that they could bring significant macroeconomic benefits, since the associated gains in real GPD per capita growth are large for policy moves which are realistically implementable in shorter time horizons. In addition the decomposition exercise confirms that earlier policy priorities, such as boosting the regions infrastructure, increase the level of schooling (including through more education for girls) and improving the institutional environment could be associated with stronger growth in the region.

15. This paper has shown that both lower income inequality and lower gender inequality could boost real GDP per capita growth in the WAEMU, in addition to previously identified policies. The results emphasize that gender inequality of outcomes and opportunities is very high, and policies to mitigate these inequality are particularly promising. In particular, closing gender gaps in education would not only stimulate growth from a more efficient allocation of resources, it would in addition increase total education in the region, thus boosting growth further. Lower gender inequality has also been associated with a more equal income distribution (Gonzales and other 2015b) which in turn is also associated with higher growth (Dabla-Norris and others 2015 and Berg and Ostry 2011). This note confirms previous findings that the region could benefit from boosting infrastructure and human capital and strengthening of institutions.

17. In promoting policies to reduce gender and income inequality, this paper does note pose any normative judgment on countries social and religious norms but argues for a level playing field, for all agents in the economy being able to explore their economic potential - if they so choose.

(adjusted for level of development)

WAEMU: Trends in Poverty and Inequality

WAEMU: Gender Inequality in the WAEMU 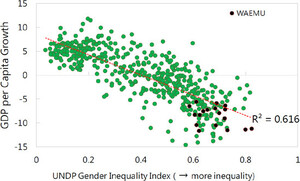 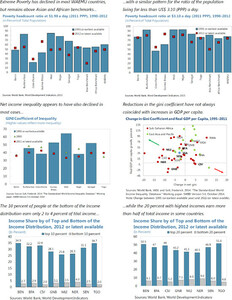 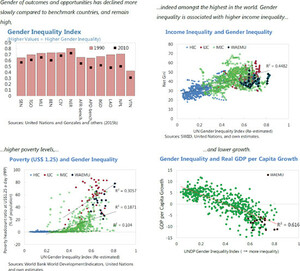 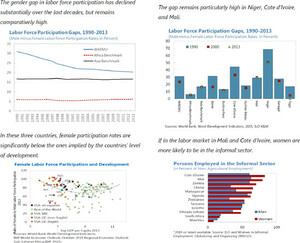 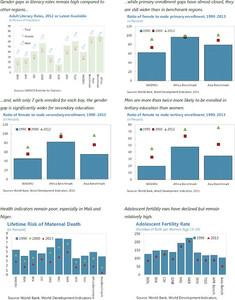 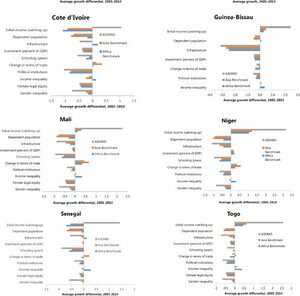 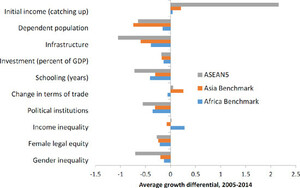