This paper discusses Malian mining taxation. Mali’s industrial mining sector is predominantly gold mining, with six industrial mines currently active. Most of the mines are old, but some have substantial reserves; extensions are planned for the Syama, Morila, Kalama, Tabakoto-Segela, and Loulo-Gounkoto mines. The Fiscal Analysis for Resource Industries model was completed for five new projects with recent feasibility studies. The government revenue contributed by the five new projects is on the order of US$1.7 billion (constant dollars) over the next 10 years. The application of the 1999 or 2012 Mining Code increases the government’s share of income in comparison with the 1991 code.

This paper discusses Malian mining taxation. Mali’s industrial mining sector is predominantly gold mining, with six industrial mines currently active. Most of the mines are old, but some have substantial reserves; extensions are planned for the Syama, Morila, Kalama, Tabakoto-Segela, and Loulo-Gounkoto mines. The Fiscal Analysis for Resource Industries model was completed for five new projects with recent feasibility studies. The government revenue contributed by the five new projects is on the order of US$1.7 billion (constant dollars) over the next 10 years. The application of the 1999 or 2012 Mining Code increases the government’s share of income in comparison with the 1991 code.

http://www.imf.org/external/np/otm/2010/110110.pdf. The mission consisted of Mr. Grégoire Rota-Graziosi (mission chief). The mission will be followed by a training mission to be conducted by Bertrand Laporte (IMF expert) during June 29–July 3.

The mission met with Mr. Boubou Cissé, Minister of Mines, and key members of his headquarters staff and field organizations.

The mission held a workshop on Thursday, June 11, on modeling income sharing between private investors and the government.

1. Mali’s industrial mining sector predominantly consists of gold mining, with six industrial mines currently active (cf. Table 1). Most of the mines are old, but a number of them still have substantial reserves; extensions are planned for the Syama, Morila, Kalama, Tabakoto-Segela, and Loulo-Gounkoto mines. One mine, Robex, is expected to go into production soon, and a feasibility study has been submitted for the Fekola mine. Preparatory works for the Kodiéran mine, held by Wassoul’or, could resume during 2015 following the payment of over CFAF 7 billion to various creditors. Accordingly, Mali’s declining gold production could be sustainably reversed in the coming years if international prices remain at current levels.

1: The December 12, 2006 amendment states that the production commencement date is the date on which the mine reaches 90 percent of its production capacity for at least 60 consecutive days.
Table 1.

1: The December 12, 2006 amendment states that the production commencement date is the date on which the mine reaches 90 percent of its production capacity for at least 60 consecutive days.

3. The Fiscal Analysis for Resource Industries (FARI) model was completed for five “new” projects with recent feasibility studies.3 Two extension projects come under the 1991 Mining Code (Sadiola and Gounkoto mines), and three projects for new mines to be put in production are governed by the 1999 Mining Code (Nampala, Kodiéran, and Fékola mines). The contracts governing exploration and development (conventions d’établissement) for SEMOS SA (Sadiola), Gounkoto S.A., and Robex are available on the Ministry of Mines website. The contracts apply to the extension projects for SEMOS SA and Gounkoto SA.

4. The government revenue contributed by the five “new” projects is on the order of US$1.7 billion (constant dollars) over the next 10 years (cf. Figure 2). The estimates are based on the production of 8 million ounces of gold estimated in the feasibility studies (cf. Figure 3) and on an international price of US$1,150 per ounce of gold. One project, the extension of the Sadiola mine operated by SEMOS SA, accounts for 44 percent of the increase in production. A feasibility study was completed for a second extension of the Gounkoto mine, but it was not modeled for lack of sufficient information.

5. The application of the 1999 or 2012 Mining Code increases the government’s share of income in comparison with the 1991 code (cf. Figure 3 and Table 2). However, there are considerable differences between the projects, with the average effective tax rates (AETR) ranging from 15.8 percent to 54.5 percent for the different projects and mining codes. The impact of the 2012 Mining Code relative to the 1999 code on the AETR is not uniform; which of the two has the greatest impact depends on the structure of the project costs. It increases the AETR for those with the highest unit costs of production and reduces it for those with the lowest unit costs. The regressive nature of the tax system is the result of developments in the area taxation: the 2012 Mining Code reduced the corporate income tax rate by 10 points but reinstated the ad valorem tax of 3 percent of turnover. The internal rate of return (IRR) is greater than 26 percent in all cases, and may exceed 200 percent in certain cases.

Key Fiscal parameters for the calculation of the AETR

Key Fiscal parameters for the calculation of the AETR

6. The structure of government revenue under the 1999 Mining Code is quite different from revenue under the 2012 code (cf. Figure 4), and aptly illustrates the delicate tradeoffs between securing government receipts and being sufficiently attractive to private investors. Mining royalties (the ad valorem tax and the special tax on certain products (ISCP)) contribute the same amount to government revenue as when the 1991 Mining Code is applied, roughly 41 percent. This “step backward” secures government revenue, almost 80 percent of which was traceable (under the 1999 Mining Code) to corporate income tax and the payment of priority dividends, the bases for which are particularly exposed to transfer pricing practices.4 While the 2012 Mining Code secures a greater share of mining revenue for the government, it is less neutral than the 1999 Mining Code. By relying more on fees that are equivalent to turnover taxes, the 2012 Mining Code gives lesser consideration to the mining project’s returns or profitability, and could therefore reduce incentives to invest. Such a risk is limited, however, by the high IRRs.

Modeling of mining revenue – possible uses of the FARI model

The FARI model is a tool used to compare tax regimes. It enables the government to analyze the impact of applying different tax systems (structure, rate, and tax base) on the sharing of mining revenue between the government and the investor. The analysis can address different tax regimes that are applied or could be applied domestically, based on the country’s mining code or draft code or the regimes applied in similar countries.

The use of the FARI model to forecast tax revenue is conceivable, provided that reliable economic and tax data are available. The data for the model can be updated regularly without difficulty (by replacing forecasts with actual figures). Recording the successive results of the model can establish actual historical revenue and the differences between forecasts and actual revenue. The circulation of information between the administrations concerned is essential to the success of this component. Project technical data and production forecasts are available from the Ministry of Mines, while accounting and tax data are available from the Ministry of Finance.

The FARI model is ultimately a tool to identify constraints to raising tax revenue from the mining sector. The difference between potential sector revenue calculated by the model, tax by tax, represents vital information for the tax administration. It is also a tool to support the audit of sector tax returns.

7. The analysis of the sensitivity of the sharing of the rent in response to changes in the price of gold presented in Figure 5 reveals the regressive nature of the 1991 and 1999 mining codes and illustrates the delicate tradeoffs in any tax regime between securing government revenue and attracting private investors. All other things being equal,5 an increase in the price of gold is accompanied by a reduction of AETR and an increase in IRR: the more profitable the project, the smaller the government’s share measured by AETR. The 1991 and 1999 Mining Code, which are the tax regimes actually applied, do not allow for the capture of a larger share of mining income if the activity becomes more profitable. They can quickly become disincentives for mines with high production costs, for which the AETR can quickly exceed 100 percent (cf. Figure 5). The sensitivity to the change in costs confirms the disincentive effect of the revised 1991 and 1999 mining codes. All other things being equal, an increase in costs produces an increased AETR and a lower IRR (Figure 6).

8. At a price of gold of US$1,150 per ounce, the 2012 Mining Code produces an AETR very close to the AETR that would result from the application of Ghana’s mining code to Malian mines (cf. Figure 7). On the other hand, the AETR is well below the rates that would be generated under the mining codes of Burkina Faso and Mauritania. The difference is partly due to Burkina’s low corporate tax rate (17.5 percent compared to the general rate of 27.5 percent) and a three-year exemption from corporate income tax in Mauritania. In addition, Burkina Faso and Mauritania apply a progressive ad valorem fee, for which the maximum rate of 5 percent is below the consolidated rate of 6% (ISCP + ad valorem fee) applied in Mali (cf. Table 3). Figure 7 and 8 confirm the regressive nature of the Malian tax system: the less profitable the project, the higher the IRR (Figure 8: Songhoi Resources, Robex, Semos SA) and the higher the effective tax rate (Figure 7). This regressive aspect, to which none of the countries is immune, is due in particular to high proportional fees.

9. The creation of an interagency unit to oversee mining revenue would promote, inter alia, greater use of the AFIE model. Regardless of the purpose for which the model is used, it requires direct access to customs and tax information from the Ministry of Finance and technical data from the Ministry of Mines. The unit would coordinate the efforts of the administrations concerned, would facilitate a better understanding of the bases of the different taxes and fees, and would ensure more accurate macro-fiscal framing. Technical assistance missions could be useful to strengthen capacities in technical areas such as transfer pricing practices or strategic monitoring of international financial information relating to the Malian mining sector. The unit could promote standardization of the economic and tax information used in feasibility studies as well as update of the information over the course of the mining projects’ life cycles (cf. Annex 1, sample form for use in requesting information from mining companies).

Feasibility study to bring the Kodiéran mine in Mali into production, Roch Ltd. Consulting Group, November 1996.

The original version of this report was in French. The present English translation is for consultation purpose only.

The link for the Komana mine is inactive.

The mission also assumes that the dividends paid to the government as minority shareholder (10 percent) were zero under the revised 1991 Mining Code. In fact, the distribution of dividends is decided by majority vote of the shareholder meeting. It is common practice for profits not to be distributed (set aside as reserves) to finance other mining projects which may or may not succeed. There is also a comparatively substantial risk that the reserves may be transferred abroad via transfer pricing practices.

In particular, unit costs of production.

AETR (%) according to Mining Code applied 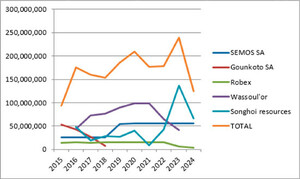 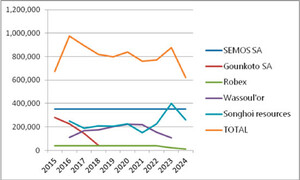 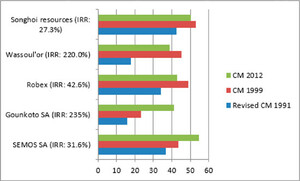 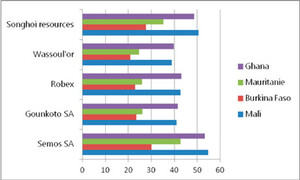 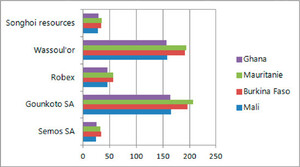