Macroeconomic Impacts of Gender Inequality and Informality in India1

This chapter employs a dynamic stochastic general equilibrium model to analyze the macroeconomic impact of gender-targeted policies on labor market outcomes of females and on aggregate economic activity in India. These policies are found to increase female labor force participation and output. To help lower gender gaps in formal employment and wages, gender-targeted policies should be implemented simultaneously with policies focused on alleviating labor market rigidities. Otherwise, a lack of sufficient formal job creation could result in an increase in overall unemployment and informality and could further widen gender gaps.

1. A lack of decent jobs in the formal sector is an important factor leading to low and falling female labor force participation rates in India. India’s female labor force participation (FLFP) is the third lowest in the South Asia region and has been declining—it fell from 34.1 percent in 1999–00 to 27.2 percent in 2011–12. It is less than one-third of male labor force participation which has remained relatively stable at around 80 percent. Females also receive lower wages, are overrepresented in informal and unpaid domestic work, and gender gaps exist along several other dimensions including education, access to productive inputs, and bargaining power at home (Figure 1). In addition to factors such as social norms, education, safety, infrastructure, and gender discrimination, lack of employment opportunities in the formal (organized) sector is also an important contributor to this trend in FLFP (see Das et al, 2015; and Chatterjee et al, 2015). More than 80 percent of the workforce in India works in the informal (unorganized) sector, and women constitute only 20 percent of total formal employment (Census, 2011).2 Rigidities in the labor market due to strict regulations have been identified as the main drivers of this large informality (see Besley and Burgess, 2004; Sharma, 2009; and ILO, 2012).

2. A considerably vast and growing literature finds a negative impact of gender inequality in employment and education on economic growth. Increase in FLFP and employment is shown to raise growth through an increase in average human capital (as females invest more in children’s education relative to males), increase in household income, and a move from unpaid domestic work (unaccounted for in GDP) to paid market work (e.g. Klasen, 1999; Dollar and Gatti, 1999; Klasen and Lamanna, 2009; and Barro and Lee, 2013). However, in India where women are more likely to be engaged in insecure, low paid jobs in the informal sector, FLFP only provides a partial analysis of women’s work. Hence, policy recommendations based on increasing FLFP alone can be misleading as the impact of policies on the quality of female employment, wages, and unemployment reinforces a virtuous cycle of gender dynamics.

3. The following question is analyzed: What is the optimal strategy for implementing policies to improve labor market outcomes of females (in particular, FLFP, females’ access to formal employment, and gender wage gaps), while also contributing to aggregate economic activity (GDP, aggregate unemployment, and formality in the labor market)? We study the impact of gender-targeted policies such as an increase in female education, stronger enforcement of laws against gender discrimination in employment, improvements in public provisions (including childcare), and an increase in female safety and mobility. In addition, the impact of lower regulations in the formal sector, i.e. higher labor market flexibility, is also estimated.

4. A dynamic stochastic general equilibrium (DSGE) model with both informality and gender inequality is estimated for India. The two-sector model—estimated on nine key macroeconomic variables from 1996Q1 to 2012Q1 using Bayesian estimation techniques—adds gender inequality and informality in the labor market to a standard small open economy DSGE model. Households consist of males and females, where the labor supply decision of each individual is an outcome of an optimal allocation among paid market-good production, unpaid home-good production,3 job search, and leisure; while also being driven by their relative intra-household bargaining power.4 Gender inequality is modeled as various frictions on demand for female labor and on female supply where constraints on supply include higher safety and mobility constraints, social norms and lack of public provisions (infrastructure, childcare etc.), whereas constraints on female labor demand entail lower education (i.e. lower worker skill) relative to males and gender discrimination in employment. To capture rigidities in the labor market, firms in the formal sector face a higher cost of hiring and firing workers; and workers employed in the formal sector have higher bargaining power in the wage determination process (i.e. unionized labor). In addition, female workers have lower bargaining power due to male domination of labor unions in India (ILO’s Trade Union Membership Statistics, 2011).

5. While gender-targeted policies boost FLFP and output, lack of adequate formal job creation leads to higher unemployment and informality and further widens gender wage gaps. By lowering constraints on female labor supply, both increase in female safety and mobility (Figure 2)5 and improvements in public provisions boost FLFP, leading to gains in GDP as females move from unpaid home-work unaccounted for in GDP (and leisure) to market-work. However, as a result of labor market rigidities, these policies do not generate sufficient job creation in the formal sector, resulting in a large proportion of the increased female participants either getting employed in low paying informal jobs or staying unemployed. This further widens gender gaps in wages and informal employment, thus worsening gender inequality, while also increasing aggregate informality and unemployment in the economy.6 However, we do find one exception with the policy of an increase in female education, which by increasing female workers’ efficiency in employment directly leads to an increase in females’ formal employment (Figure 3). This in turn increases the overall productivity and size of the formal sector, leading to the creation of more formal jobs for both males and females. However, due to slow reallocation of workers to the formal sector, female formality falls and gender wage gaps widen in the short-run.

6. Lowering regulations in the formal labor market allows more women and men to be employed in the formal sector, however, males gain more and there is a fall in FLFP. Relaxing regulations lowers hiring cost and bargaining power of formal workers, leading to an increase in formal employment of both males and females, a fall in unemployment and an increase in real output (Figure 4). However, male workers gain more, as unchanged constraints on female labor supply and demand along with a positive household income effect, both lower FLFP (as opposed to increasing in the short-run and falling marginally in the long-run for males) and lead to a smaller increase in female formality in comparison to males. In addition, slow reallocation of workers from the informal to the relatively rigid formal sector increases unemployment and lowers real output in the short-run.

7. Simultaneously implementing gender-targeted policies that lower constraints on FLFP combined with policies that boost formal job creation not only improves gender equality in the labor market, but also leads to significantly higher gains in aggregate economic activity. Figure 5 (black solid line) shows the effect of a simultaneous reform package combining an increase in female safety and mobility (blue dashed line) with deregulation in the formal labor market (red dashed line). Better female safety and mobility outside the home directly increases their labor participation with these females now being able to find high paying formal jobs as the formal sector expands due to lower labor market rigidities. Expansion of the formal sector also increases male formality in employment, which leads to higher male labor participation as their return from job search is now higher. Thus, real output (GDP) increases by more in this scenario. Moreover, it also increases in the short-run as opposed to when only the deregulation reform is implemented.7 We find similar results (black solid line) when the policy of increase in female safety and mobility (blue dashed line) is combined with an increase in female education (red dashed line) in Figure 6.8 Hence, policies should be designed to prioritize getting females into paid work outside the home (i.e. lower constraints on female labor supply), while at the same time making sure that there are enough formal job opportunities (i.e. lower formal labor market rigidities), and that females have access to these formal jobs (i.e. lower constraints on female labor demand).

Intra-household bargaining power of females is an increasing function of relative female-to-male earnings which captures the feedback effect of females’ labor market outcomes on their bargaining position at home.

For GDP (real output), all figures in this chapter (Figures 2–6) show a percentage deviation from the initial steady state, while for the rest of the variables the levels (%) are shown. Formality is the percentage of formal workers among the employed. Similarly, female (male) formality is the percentage of female (male) workers employed formally among the ones employed. Wage gap is the ratio of male-to-female average wage. Ratio of female-to-male home-work reflects gender gaps in unpaid care work.

However, there is a larger short-run increase in unemployment caused by two factors: increase in both male and female participation, and slower creation of jobs in the formal relative to the informal sector.

Increase in Female Safety and Mobility

Increase in Female Education and Safety 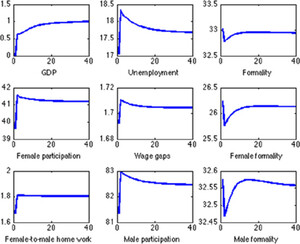 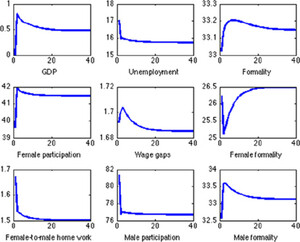 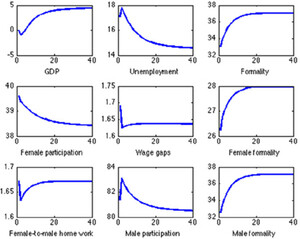 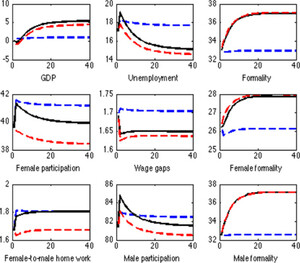 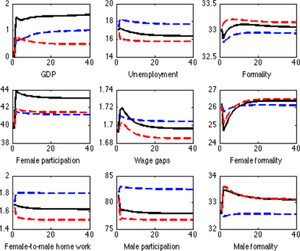