1. Minimum support prices for rice and wheat have often been singled out as key drivers of Indian inflation. Cereals have a combined weight of about 10 percent in the Indian CPI basket and their inflation has been a key contributor to Indian inflation in recent years. India’s agriculture regulatory framework allocates a central role to the state in the market of cereals. Its key regulatory pillar is the Essential Commodities Act which empowers the central and state governments to regulate and control production, distribution and pricing of commodities identified as essential for consumers. Instruments for market intervention include minimum support prices (MSPs), buffer stocks and the Targeted Public Distribution System. Although minimum support prices are intended to provide a floor for market prices, in practice in part due to an open ended procurement policy, substantial increases in minimum support prices in recent years were generally followed by rising inflation in key agricultural crops (Rajan, 2014; Anand and Cashin, 2016).

2. International market prices are an important input into government decisions on minimum support price increases. Fixed by the government, MSPs are decided on the recommendations of the Commission for Agricultural Costs and Prices (CACP), which in formulating its recommendations takes into account a large number of factors, key among which are domestic cereal production costs as well as the international price situation. Indeed, the Food Corporation of India was established in 1965 against the backdrop of India’s major shortage of grains and a massive grain import bill. Over time, as production increased substantially, India has emerged as a net cereal exporter and the largest exporter of rice in the world. Nonetheless, India’s policy measures to isolate domestic cereal prices from volatility of international market prices suggest that international market price dynamics remain non-trivial. In addition, domestic prices are also affected by generally high import tariffs, occasional product-specific export bans and export subsidies, as well as budgetary support for agricultural inputs and infrastructure.

4. However, hikes in MSPs for cereals appear not to have a lasting impact on cereal inflation. Vector-error correction models of domestic farm gate prices and MSPs indicate that farm gate prices of both wheat and rice are weakly exogenous to their MSPs, which suggest that MSPs rather than domestic market prices tend to adjust to short-term deviations from their long-term relationships. In addition, impulse responses of farm gate prices for both rice and wheat to hikes in MSPs do not indicate the presence of a lasting impact on cereal inflation. On the contrary, the responses of MSPs for both cereals to shocks to wholesale prices are statistically significant, covering on average about ¾ of the wholesale prices shock over one year. The empirical evidence thus suggests that except in the short-term, MSPs tend to react to changes in wholesale prices, rather than the other way around. This implies that the inflationary impact of MSP hikes may be rather trivial. Moreover, as MSPs and domestic wholesale prices of cereals are influenced by and move in line with international prices, the global market price will remain important in defining Indian cereal prices in the long-term.

5. The guiding principle for MSPs should be alignment of domestic and international prices along the long-term trends, while guarding against excessive domestic price volatility through temporary safeguards, as has been advocated by the CACP. The international commodity price outlook suggests that Indian cereal inflation is likely to remain in check. In addition, off-loading of excessive cereal buffer stocks into open markets or through exports could have an additional softening impact on prices. Nonetheless, domestic cost challenges remain, including on account of two consecutive unfavorable monsoons, and they could also chip away at rural demand recovery. In addition, the impact of the collapse of global oil prices on Indian cereal production costs is likely to be limited (estimated at only around 1 percentage point). Indeed, in response to a drop in global wheat prices, Indian authorities have recently imposed a wheat import duty (25 percent) for the first time in nearly a decade. Indian cereal yields are subpar in international comparison and the variation in yields across Indian states is also large. Therefore, price and income support, such as the recent increase in Mahatma Gandhi National Rural Employment Act (MGNREGA) working days for drought-affected rural areas, and stabilization policies would need to be complemented by policies to enhance agricultural productivity, including along the lines of the Food Corporation of India Restructuring Committee Report. 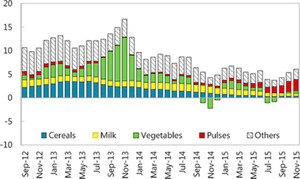 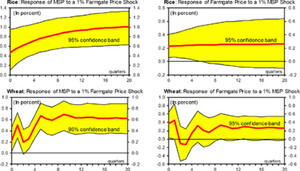