How Open is India’s Capital Account? An Arbitrage-Based Approach1

Traditional measures of capital account openness rank India as among the countries with the most closed capital accounts. However, recent capital flows in and out of India seem to suggest at least some openness. This chapter examines the effectiveness of India’s capital controls using an arbitrage-based approach: effective capital controls can give rise to a persistent and one-sided price gap between onshore and offshore asset prices—measuring such price gaps is a way to gauge the effectiveness of capital controls. A cross-country comparison suggests that India’s capital account is not as closed as suggested by traditional measures. Most importantly, the sign of the price gaps indicate that the remaining binding controls in India are mainly on inflows, rather than on outflows.

1. India has made significant progress in liberalizing its capital account since the 1980s. India had a closed capital account throughout most of the post-independence period, and a gradual liberalization was initiated after the 1991 balance of payments crisis. Bearing in mind the experiences from the Latin American debt crisis and the Asian financial crisis, India has undertaken a gradual approach by prioritizing certain types of flows (e.g., non-debt flows such as FDI) in the liberalization process. Notably, FDI inflows are now almost universally allowed. Portfolio inflows have also been liberalized significantly—while caps remain on certain types of foreign institutional investments (FIIs), they have been relaxed more recently. Other inflows, however, are subject to more restrictions.2 All legislative restrictions on non-residents are for inflows, which, once in, can flow out freely. On residents, there is still legislative restriction on outflows, but the limit has been raised to a level that is unlikely to be binding.3 Capital account liberalization, together with India’s increasing financial integration and attractiveness as an investment destination, has resulted in a pickup in non-resident portfolio inflows in the 2000s, followed by sizeable outflows during the global financial crisis and more volatile capital flows afterwards. Resident portfolio investment abroad was nil in the 2000s, but such outflows have increased more recently, especially during bouts of financial market volatility (see Figure).

2. However, traditional measures of capital account openness do not capture this liberalization. Two principal types of measures—de jure measures which reflect legislated controls and de facto measures which capture the effectiveness of controls—both rank India as among countries with the most closed capital accounts. Moreover, the most commonly-used de jure measures, such as the Chinn-Ito, Quinn and IMF share indices (all based on information from the IMF’s Annual Report on Exchange Arrangements and Exchange Restrictions, or AREAER), have barely moved in the last four decades for India, which seems to be at odds with both the legislative changes and actual capital flows to India discussed above. In addition, the traditional measures have a few more limitations: (i) the traditional de jure measures do not separate controls on inflows and outflows, even though the detailed information provided in the AREAER’s text allows it; (ii) the traditional de facto measures (e.g., the Lane and Milesi-Ferretti index) indicate financial integration rather than capital controls, since they reflect factors related to financial development and market access, which may not be directly linked to capital controls.4 Finally, de jure and de facto measures are not correlated at all—even though they are expected to differ as they measure different concepts, a complete lack of correlation complicates the task of assessing the actual degree of capital account openness in an economy, especially in a dynamic economy such as India.

3. In light of the limitations of traditional indicators, this chapter approaches the issue from a different angle. It aims to measure the de facto capital controls (or effective or binding controls) in India, but instead of measuring the impact of controls on the quantity of capital flows, as the Lane and Milesi-Ferretti index attempts to do, we measure the price impact on assets. In principle, for the same asset class, their onshore and offshore prices should be the same in a world of free capital flows. In practice, there are always frictions that can give rise to price gaps between onshore and offshore markets, but in countries with more open capital accounts, such price gaps should be small and should close relatively quickly as capital flows to eliminate arbitrage opportunities. However, if persistent and one-sided price gaps arise, it is an indication of de facto capital controls. In addition, the sign of the price gaps provide information on the direction of capital controls—if the return of an asset is persistently higher onshore than offshore, then the controls are on inflows, and vice versa. This arbitrage-based approach, however, also has its limitations. It requires the existence of functioning offshore markets, such as the non-deliverable forward (NDF) market, which by itself is an indication of the existence of capital controls. Also, this requirement narrows our country sample significantly—only a few major emerging markets (mainly in Asia) and advanced economies (mainly Korea) have NDF markets. Finally, this approach assumes that the only factor that drives the onshore-offshore price differences is capital controls—this could be a strong assumption especially during crisis episodes when asset prices move dramatically due to various reasons such as the lack of liquidity in certain markets. As a result, we focus on the price gaps in non-crisis periods, and in doing so we follow the approach developed in Ma and McCauley (2013).

5. Figure 1 illustrates how onshore-offshore forward exchange rate gaps could reflect a country’s effective capital controls in this market. For example, China tends to have more persistent and one-sided price gaps than Brazil, indicating more effective capital controls in China. India appears somewhere in between—India’s forward rate gaps move in both directions but the gaps are more persistent than those in Brazil, especially before the global financial crisis (GFC). Before the GFC, India had a couple of extended periods of negative forward rate gaps (e.g., from 2001 to early 2003, and in 2006-07), suggesting effective controls on outflows. During the GFC, there was a short-lived large negative gap. As argued above, dramatic price changes during crises could be due to multiple reasons and it is difficult to determine to what extent this is due to capital controls. After the GFC, the forward rate gaps are more volatile and in the more recent period since 2014 the gaps for India appear largely positive, suggesting that controls are more binding on inflows.

6. A cross-country comparison confirms that India has relatively small forward rate gaps compared to its peers, and the current binding controls are mostly on inflows. As this analysis can only be applied to countries with functioning NDF markets, our sample covers mainly Asian peers (China, Indonesia, Malaysia, Philippines, Thailand and Korea) as well as Brazil. This crosscountry comparison confirms that India’s average onshore-offshore forward rate gap over the entire sample period is relatively small, comparable to levels seen in Brazil and Korea (Table 1), both of which are typically considered to have much more open capital accounts than India. This result is robust when using 12-month forward rate and by using absolute values of the price gaps. Moreover, India has, on average, smaller price gaps than most Asian peers. Finally, while India’s controls on outflows seem to be less binding after the GFC, controls on inflows appear more binding despite recent relaxation of the ceilings on inflows. This could in part be due to the fact that inflows are sometimes increasing faster than the relaxation of the ceilings on inflows.

(As a percentage of the spot)

(As a percentage of the spot)

7. India has much larger onshore-offshore short-term interest rate gaps than its peers, suggesting more binding controls in this market, but again the effective controls are on inflows (Table 2). India’s short-term interest rate gaps are significantly above those in its peers and also much higher post-GFC than before. But again, the gaps are all positive, indicating tight controls on inflows to this market. This is in line with India’s approach in limiting short-term “hot money” in its overall capital account liberalization process.

8. In conclusion, while India still has substantial legislative restrictions on capital flows, especially on residents, the effective controls are mostly on inflows and the degree of controls differ across markets. India seems to have much less binding controls than most Asian peers on the forward exchange market, but tighter controls on the short-term money market. This reflects India’s gradual approach toward capital account liberalization by prioritizing more “productive” flows while limiting “hot money”. Moreover, the remaining effective controls are mostly on inflows rather than on outflows—this has implications for the next steps of liberalization and also on India’s self insurance strategy in preparation for future external shocks. Finally, while the arbitrage-based approach is useful, it has its limitations because it is based on the assumption that capital controls are the only reason underlying the onshore-offshore price wedges, which could be a strong assumption in some circumstances. Data constraints also limit the country sample that can be used for cross-country analysis. Therefore, results from this analysis should be used together with other approaches to form an overall assessment of the extent of capital account openness.

See the IMF’s Annual Report on Exchange Arrangements and Exchange Restrictions (AREAER). The limit on resident individuals, effective June 1, 2015, is US$250,000, significantly higher than India’s per capita GDP, which is about US$1,600.

A hypothetical case can clarify this point: consider a country with no legislated capital controls but it is also not financially integrated to the global economy (e.g., due to the lack of domestic financial market and hence no interest from external investors)—in this case, the de facto measures would mistakenly suggest full capital controls.

In principle, one could also calculate the onshore-offshore price gaps of bond yields as well as equity prices but data limitations further narrow our country sample, making a comparison of India with its peers more difficult.

There is a debate on whether the covered interest parity still holds after the global financial crisis—see Baba and Packer (2009). Therefore, results for the post-GFC period from this approach should be interpreted with caution. 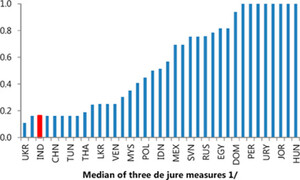 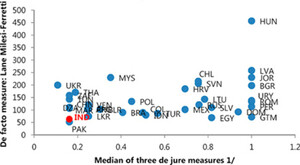 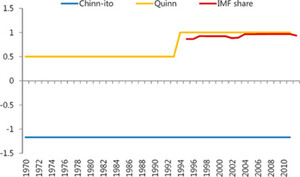