1. Uruguay has achieved high growth rates and made significant progress in its integration in the global economy over the past decade. The country has achieved an average growth of 4.8 percent between 2003–2015 on the back of good macroeconomic management and favorable external environment. Income per capita has almost doubled in real terms during the period, becoming among the highest in the region.2 Poverty and unemployment have declined drastically.

2. As a small open economy largely based on exports and tourism, Uruguay is exposed to volatility of commodity prices and the broader external economic environment. Two important features of Uruguay’s economy stand out: strong linkages with neighboring economies and relatively high growth volatility. Uruguay’s economy has been closely linked to Brazil’s and Argentina’s economies over the past three decades (chart). Like other countries in the region, Uruguay has also experienced high growth volatility due to commodity cycles and regional linkages.3

3. Against this background, Uruguay has recognized the need to diversify its sources of growth. The diversification is even more important when global commodity markets appear to be in a secular downturn in the coming years amid subdued outlook of its neighbors and the region. Going forward, given the limited scope for achieving significant economies of scale, Uruguay has to rely on the export of goods and services with higher levels of value-added to a diversified export market for further growth.

4. This chapter reviews Uruguay’s progress on diversification and the challenges it needs to address to achieve a higher and more stable growth. It first examines Uruguay’s trade pattern, diversification of value content of its product so far, and the growth linkage between Uruguay and its neighbors. The paper then discusses policy options to promote further diversification.

B. Diversification and Growth: What to Diversify?

7. As a small open economy without significant economies of scale, Uruguay could gain more from quality upgrading (higher value-added) and export market diversification than from further sectoral diversification. Given its size, the country cannot opt to diversity its economy to the same extent as larger countries such as China, Korea, or Brazil. Rather, the diversification should be grounded in its comparative advantages, harnessing knowledge spillover to increase competitiveness in higher levels of productivity and value addition.

Export diversification across partners and products

8. Uruguay has made progress in diversifying its export markets. According to trade statistics, Uruguay is exporting to around 150 countries around the world.5 Between 2004 and 2015, export to China increased from 3.5 percent to 13.3 percent respectively. At the same time, export to “other countries” excluding China, EU, and its neighbors increased from 31.7 percent of total export to 42.7 percent. The weight of exports to the European Union and North America has decreased as a percentage of total exports. Exports to Brazil have remained significant, staying around 20 percent.

9. Uruguay has also made progress in diversifying its export products. Based on the Product Concentration Index, Uruguay is more diversified than many other countries in the region (chart).6 Exports of commodities have increased significantly, both in values and as a share of total exports, over the past decade, driven by export of animal products (mainly beef) and vegetable products (largely soy beans). Export of Wood (pulp) also increased (chart).

11. Increasing commodity exports have been accompanied by increased quality in food and animal products. Based on the IMF Product Quality Upgrading Index, the quality of food and live animals has improved close to the level of quality of New Zealand and Australia—its key competitors in international markets (chart).7

12. However, there is scope to upgrade further the quality of Uruguay’ existing export basket. Uruguay’s position on sectoral quality ladder points to the further potential for quality upgrading within existing products baskets, especially in Uruguay’s main export- food and animal products (chart).8

13. Uruguay has also increased its economy complexity as reflected in the Economic complexity index (chart). The index reflects not only the breadth of a country’s exports, but also how knowledge intensive they are.9 Uruguay stands out as being more complex than many countries in the region (chart). However, Uruguay’s position on the global ranking of economic complexity index suggests that there is still untapped potential for further economic progress (chart).

14. While the growth linkages with Argentina has been diminishing in recent years, it remains an important source of tourism and FDI.

16. A cross country comparison of the investment climate suggests several relevant areas, where Uruguay has lagged. These include improving secondary education, enhancing labor market efficiency, and upgrading infrastructure to meet rising demand of its growing economy (chart). In this context, the commitment of the government to boost infrastructure investments, revamp secondary education and skill formation for the youth, and foster an innovation-friendly business environment should be noted.

19. Uruguay’s logistic performance also offers scope for substantial improvement. Uruguay’s logistic performance lags behind its peers in the region, in particular, regarding the efficiency of customs and border management clearance, the ease of arranging competitively priced shipments, the competence and quality of logistics services, the ability to track and trace consignments, and timeliness to match its competitors.11 Improvements would help to create a seamless connection between farms, firms, and markets, and to attract foreign direct investment.

20. Improving education and upgrading skills will help diversification and innovations to enhance the value added content. Skilled work force his crucial for moving up the value chain and for capturing knowledge spillovers from foreign direct investment (IMF 2014; Daude, Nagengast, and Perea 2014). A better-educated workforce is also more likely to spawn successful entrepreneurs seeking to branch out into improving existing products, and to absorb and adopt new technologies.

21. Declined quality of secondary education is a major constrain to Uruguay’s productivity growth and diversification effort, particularly in the context of an aging population. While Uruguay has strong performance in the provision of basic education and literacy skills, achievements at more advanced levels of education are weaker than peers at similar income level (chart). Dropout rates in secondary schools are high (chart). It will be key to improve the coverage and quality of secondary school as well as vocational training.

22. Labor market efficiency could be enhanced as it has decreased over the past decade (chart).12 The World Economic Forum Survey ranks labor market efficiency as the weakest aspect of doing business in Uruguay. Key elements such as cooperation in labor-employer relation, link between pay and productivity, and wage determination flexibility have lagged behind other countries of similar income level (chart). Hence, it would be useful to evaluate labor market regulations and the wage determination mechanism introduced in recent years and ensure that they strike a good balance between efficiency and appropriate protection for workers.

23. Structural reforms can help Uruguay achieve another phase of growth in the context of a less favorable external environment. Uruguay has achieved a decade of high growth, diversified its export markets, and has started upgrading the quality of its products and services. Further diversification in these two areas would help boost Uruguay’s growth. Greater diversification of markets would also help reduce exposure to adverse external shocks, and thus lower growth volatility. To enhance the diversification, an upgrade of Uruguay’s transport and logistics infrastructure, improvements in the quality and enrollment of secondary education, expansion of vocational training programs, and increase in labor market efficiency to better tie wages to productivity are key.

Income per capita has tripled in nominal terms during the period.

For macroeconomic volatility in Latin America, see, for instance, Singh (2006) and Gruss Bertrand (2014).

Uruguay has also made progress in diversifying its sources of foreign direct investment. This chapter focuses on products and market diversification.

The Index is a measure of the dispersion of trade value across an exporter’s products. A county with a preponderance of trade value concentrated in a very few products will have an index value close to 1. Thus, it is an indicator of the exporter’s vulnerability to trade shocks. See Reis and Farole (2012).

The index is calculated as the unit value adjusted for differences in production costs. IMF (2014) explains how quality is measured. The dataset is are available at www.imf.org/external/np/res/dfidimf/diversification.htm.

Quality ladders reflect the extent of heterogeneity in quality across different varieties of a given product. The length of a quality ladder indicates the potential for quality upgrading for each products (IMF 2014).

The indicator is calculated as 1- (Uruguay’s ranking/total number of countries). A high ranking value in the WEF survey sample countries means less competitiveness. 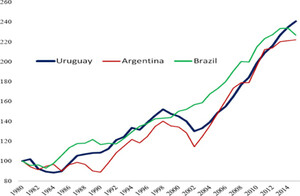 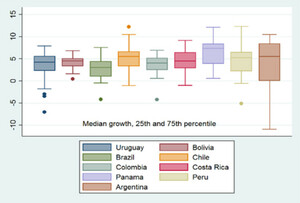 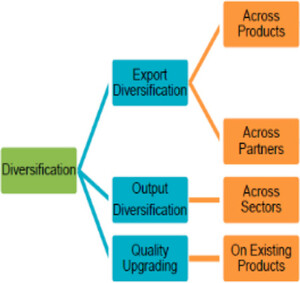 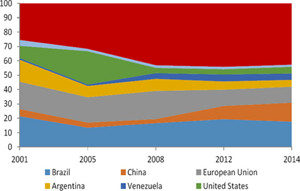 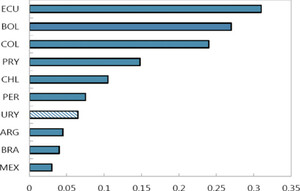 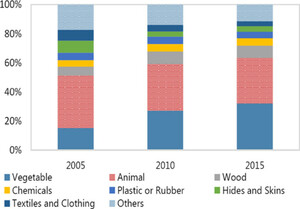 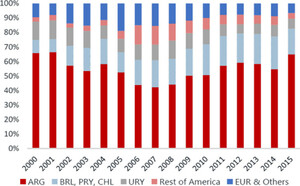 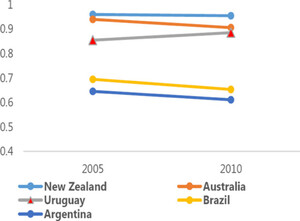 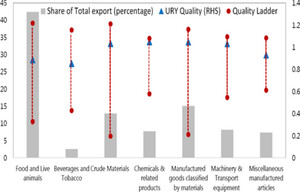 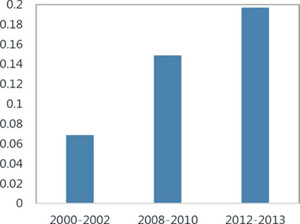 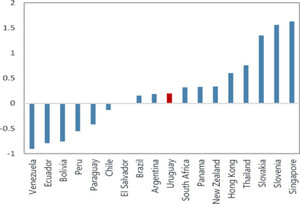 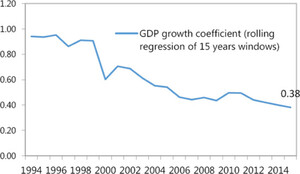 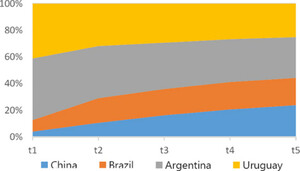 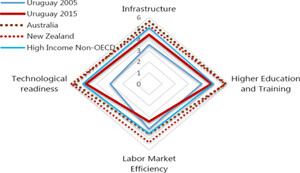 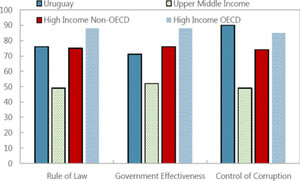 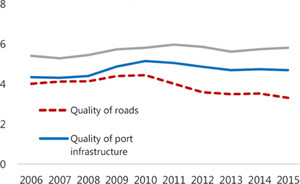 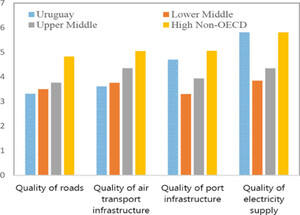 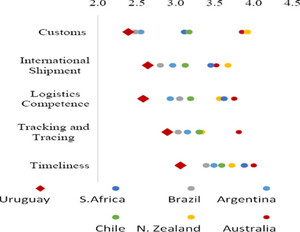 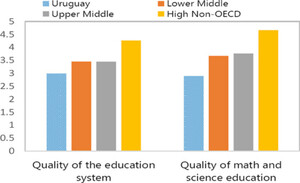 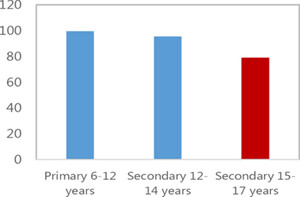 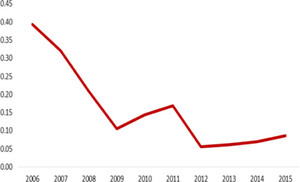 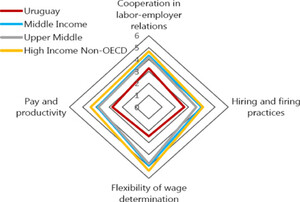