1. Access to finance is a key component of financial development, which in turn has been linked to higher economic growth and resilience (Sahay and others, 2015). Developing a country’s financial system can expand options for financing, vehicles for saving, improve resource allocation and risk management, and facilitate diversification. Economic stability and resilience can also be enhanced, to the degree that a well developed and liquid financial system can help absorb shocks. Recent empirical analysis has moved away from traditional narrow measures of financial development to develop a broad-based index that encompasses financial access (ability to access financial services), depth (size and liquidity of markets), and efficiency (intermediation costs), spanning both financial institutions and markets (Heng and others, 2015). A country’s score on the index enables a useful comparison against benchmarks, as well as against its own fundamentals. In addition, the exercise offers valuable insights into the specific subcomponents where a country may be lagging.

2. A broad-based index of financial development indicates that Uruguay lags behind regional peers, and also relative to what could be expected given its own macroeconomic fundamentals. Uruguay’s score of 0.2 in the composite financial development index (based on 2013 data) is equivalent to half the LA5 average, and below the individual scores of all LA5 countries (as reported in Heng and others, 2015). Furthermore, a regression analysis suggests that Uruguay scores worse on the index than would be predicted by its own economic fundamentals (including income per capita, government size, trade openness, inflation, educational attainment, and others). A decomposition of the results shows that this “underdevelopment” relative to fundamentals mostly reflects low access to finance in Uruguay (both through financial institutions and through markets) and low financial institution depth (measured through variables such as private sector credit). All other LA5 countries have index scores better than or equivalent to what their fundamentals would predict. Uruguay’s negative financial development “gap” presents a real opportunity to develop its financial system to a level that would be well-supported by its current level of socioeconomic development.

3. This paper examines the dimensions in which Uruguay’s financial development is lagging, and the benefits that might accrue if obstacles to development in these areas were removed. The analysis focuses on the frictions affecting firms’ access to credit, corporate credit deepening, and the efficiency of financial intermediation in Uruguay, and quantifies the potential economic benefits of relaxing these constraints, with implications for firms and households alike. The next section lays out the basic premises of the model, together with some facts to illustrate different elementsof it. The following section presents the results of the calibration and comparative statics exercise. The last section concludes with a discussion of measures that have been taken by the Uruguayan authorities recently, which may alleviate some of the constraints emphasized in the model.

4. This paper uses a slightly modified version of the model developed by Dabla-Norris, Townsend and Unsal (2015) to assess the impact of financial deepening on growth.2 The model focuses on bank credit to firms. It is a general equilibrium model with agents that are heterogeneous in wealth and talent. Agents live for two periods. In the first period, they decide on their occupation (worker or entrepreneur), credit market participation and investment. In the second period, they realize income as wage or business profit, depending on their occupation, and consume or leave a bequest to their offspring. Each offspring inherits wealth equal to the bequest and talent from her parents with some probability.

5. Given their wealth and talent, agents choose to become entrepreneurs or workers. Entrepreneurs have access to a production technology that uses capital and labor as inputs, the productivity of which depends on the agent’s talent, and which fails with some probability p. They may borrow against collateral from financial institutions to expand their firm’s scale after paying a fixed credit participation cost ψ. The amount of collateral required for borrowing is determined by a parameter λ. The collateral is remunerated at the deposit rate. In case of default, banks verify the state of the borrowers at some cost χ, and recover the net value of the firm (a function of the recovery rate η) or the full face value of the loan, whichever is smaller.

6. The version of the model used in this paper relaxes the assumption of perfect competition in the financial sector by introducing an intermediation margin, τ, in the banks’ profit function.3 Previous studies on Uruguay’s banking sector have indeed documented a high degree of concentration in the sector, and lack of perfectly competitive market dynamics (see the following paper on “Bank lending and competition in the banking sector”). The intermediation margin increases the interest rate at which entrepreneurs can borrow and directly contributes to the spread between the lending and deposit rates.

7. The model captures the three dimensions of financial development: access, depth, and efficiency.

8. In the model, financial deepening, in the form of a reduction in financial frictions, leads to higher access of firms to credit and higher growth. In equilibrium, only talented agents with a certain level of wealth or collateral choose to become entrepreneurs while untalented or poor agents choose to be workers. A reduction in the credit participation cost and the collateral requirement allows more talented agents to become entrepreneurs and to obtain credit with a positive effect on growth. Similarly, a drop in the intermediation margin and the monitoring cost limits the resources wasted due to frictions and leads to higher growth.

9. The model is calibrated to match the data in 2006 and 2010, which corresponds to the year of the latest World Bank Enterprise Survey. The gross savings rate from the World Bank Development Indicators is used to calibrate the bequest rate ω. λ is set to match the average effective value of collateral from the World Bank 2006 and 2010 Enterprise Surveys. The participation cost ψ, the monitoring cost χ, the probability of failure p, and the recovery rate η are jointly calibrated to match the percentage of firms with credit, the non-performing loan ratio, the interest rate spread, and the employment distribution. The intermediation margin τ is calibrated directly from the net interest margin, computed from FSI data. The other parameters are calibrated using the same standard values from the literature as in Dabla-Norris and others (2015).

10. The data indicate that frictions related to access, depth and efficiency improved in Uruguay between 2006 and 2010. The share of firms with a credit line increased from 45 percent in 2006 to 49 percent in 2010. Furthermore, the average collateral rate fell from 226 percent to 165 percent between 2006 and 2010, while the proportion of loans requiring collateral dropped from 78 percent to 55 percent, yielding a significantly lower effective average collateral rate in 2010. Nevertheless, market depth measured through the ratio of private sector credit to GDP remained nearly unchanged at around 19 percent in both 2006 and 2010. Finally, intermediation costs, by way of interest rate spreads and NIMs, did show a small decline between 2006 and 2010, albeit still remaining at high levels.

11. The overall reduction in financial frictions between 2006 and 2010 contributed to a 9.9 percent increase in GDP in the model. Total factor productivity (TFP) is 5 percent higher under the 2010 calibration than under the 2006 one.7 This result is mostly due to the greater access of firms to credit as the percentage of firms with a credit line in the data went up by about 4 points.

12. The benefits that could be derived from further financial deepening are potentially large. Those are analyzed with a comparative statics exercise in which the model is solved for various values of the financial friction parameters.

13. Overall, reducing the collateral requirements yields the largest gains in terms of growth. GDP increases by 8 percent when the minimum effective collateral requirement is reduced to 50 percent.9 The transition between the two steady-states (not analyzed) may however take several years. Reducing access costs yields the biggest reduction in inequality by allowing all entrepreneurs to get credit. The reduction in inefficiencies also enhances growth, but to a smaller extent. The effect is not negligible though and reaches 1.2 percent when relaxing each of the two frictions.

14. Certain measures included in the 2014 Financial Inclusion Law are expected to address some of the above discussed frictions, with a positive effect on growth and inequality. In particular:

15. The challenge is to implement these measures in a way that maximizes their effectiveness. This may require communication campaigns targeting the youth, elderly and low-income segments of the population, to ensure the widest reach, particularly outside Montevideo. Moreover, some measures will need to be accompanied by a vigilant monitoring of the new actors in the financial system to avoid the build-up of risks outside traditional banks.

Prepared by Frederic Lambert and Diva Singh (WHD). We are grateful to the authors of Dabla-Norris and others (2015) for sharing the code to solve and calibrate their model.

Similar exercises were done for Colombia and Paraguay. See the 2014 Selected Issues Papers for both countries.

This modification is suggested in the original paper by Dabla-Norris and others (2015).

In the charts, the LA5 aggregate includes Brazil, Mexico, Colombia, Peru and Chile. The LA grouping includes the LA5, plus Argentina, Bolivia, Paraguay and Venezuela. Uruguay’s peer income group includes 21 countries across the globe with GDP per capita similar to Uruguay. The World Bank statistical benchmark uses a series of socioeconomic indicators to estimate a country’s predicted outcome for a variable based on fundamentals.

This average may underestimate the effectively required levels of collateral as the data do not account for loan requests that were rejected because firms did not have the required collateral.

Interest rate spreads are measured as the difference between average lending and deposit rates. The net interest margin is estimated as the ratio of net interest income to total interest-earning assets.

GDP is calculated as the sum of all individuals’ income; TFP is measured as the average of entrepreneurs’ talents weighted by their respective output.

The model’s conclusions about the effect of financial deepening on income inequality in general need to be interpreted cautiously, as all workers earn the same wage and financial deepening in the model is only about firms’ access to credit, not about the ability of individuals to insure against idiosyncratic shocks. Changes in the Gini coefficient essentially capture the changes in the proportion of entrepreneurs and the distribution of their profits relative to workers’ (lower) wage income.

Percent of Firms with a Line of Credit

(In percent of all firms) 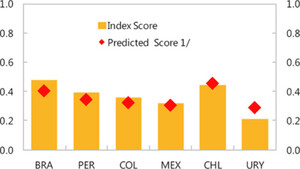 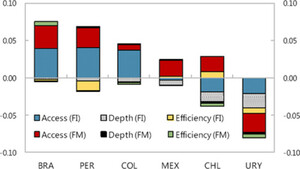 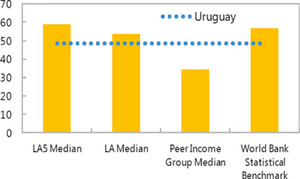 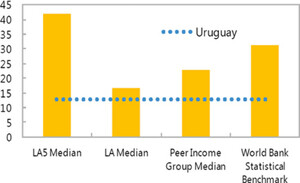 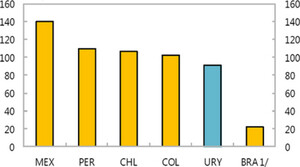 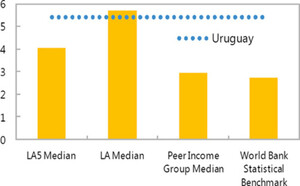 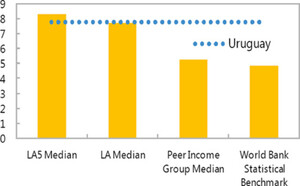 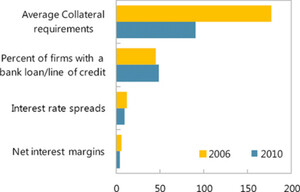 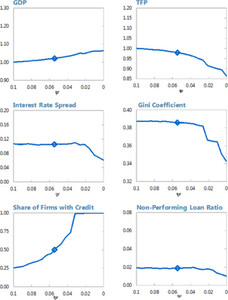 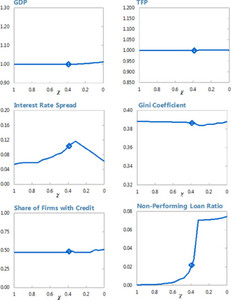 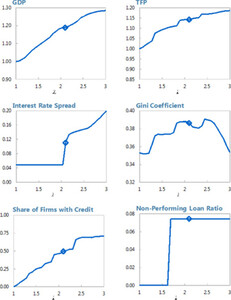 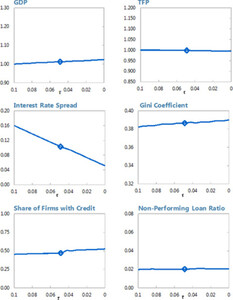