2. Rising house prices and household debt have implications for financial stability and macroeconomic risks. In view of the strong price increases, many common measures of housing valuation based on deviation from long-run historical trends, such as price-to-rent and price-to-income ratios, suggest overvaluation of about 20-40 percent (see Figure 1 and OECD, 2015; IMF Housing Watch, 2014). While international comparisons of house prices are fraught with difficulty, the household debt-to-income ratio is a key variable from a financial stability and macroeconomic risk perspective as this reflects the risks borne by households and the possible amplification of house price declines to the macro economy through wealth, investment, bank balance sheet and confidence effects (see Hunt, 2014, 2015 and Debelle, 2004).2

3. This paper analyzes long-run trends in house prices and household debt in New Zealand. The key findings are that economic fundamentals such as financial liberalization, lower interest rates, demographics and supply constraints are important factors in the large run up in house prices. Although higher house price and household debt can largely be explained, it still has implications for financial stability. The paper also discusses the macroeconomic risks arising from higher house prices and debt.

What Explains the Rise in House Prices and Household Debt?

4. Financial liberalization and disinflation have impacted equilibrium levels of house price and household debt. Following the structural reform in the 1980s, financial liberalization, lower inflation and interest rates have facilitated easier access to credit. Lower interest rates have also increased the serviceability of higher levels of debt, leading to higher levels of indebtedness and higher house prices relative to incomes. As nominal (and real) interest rates have declined over a sustained period, household debt as a share of disposable income has increased (see chart). Housing demand has also been boosted through lower interest margins of mortgage banks, and increased finance availability. For instance, OECD (2011) finds that 30 percent of the house price increases in OECD countries can be attributed to financial deregulation (e.g. lower down payment requirement is associated with higher homeownership among previously credit constrained households). In the context of Australia, Ellis (2005, 2013) argues that financial deregulation led to greater mortgage market competition and product innovation.

5. House prices and economic fundamentals. An analytical way of looking at the equilibrium level of house prices is to model and estimate the main driving sources of house prices in a period where the transition to lower interest rates was largely complete (e.g. 2000-14). This approach can include both fundamental economic demand and supply factors, and then calculate the gap between the actual house prices and their predicted values from the economic model.

6. Analytical approaches to assess the level of house prices.

7. How can one relate household debt to house prices? The link between the real interest rate and the debt/income ratio can be illustrated in a general equilibrium framework (see, for example Walentin, 2013), where lower real rates support a higher debt ratio. One can also extend the user cost model, discussed above, to illustrate the effects of lower real interest rates on household debt (see chart and Appendix 2 for details). Using this approach, a permanent decline in real interest rates of one percent suggests a change in the debt ratio in the range of 10-20 percent although the effects are non-linear (see chart). Thus, in this highly stylized context, the real interest rate assumption has considerable implications for the equilibrium level of indebtedness (see also Ellis, 2005).

8. The trends of lower interest rates, higher house prices and household debt are closely interrelated. However, the fact that higher house prices and household debt can largely be explained does not imply that it is sustainable in the long term. Sustainability would depend on the evolution of variables such as the real interest rate, income growth and expectations of real appreciation.

9. Supply factors are important in house price dynamics in New Zealand and housing supply has not kept up with demand (see RBNZ, 2011; Spencer, 2015). New Zealand’s population has grown rapidly since 2000, and much faster than the OECD average. However, residential investment has remained stable below 5 percent of GDP for much of the past decade, and below OECD average (see text chart).

10. New Zealand’s population is highly urbanized, with 40 percent in the two largest cities. As city prices are typically higher than rural, countries with high degrees of urbanization tend to have higher house prices on average (see Ellis and Andrews, 2001). Supply of housing tends to be inelastic as geographic conditions, such as limited available land for high density housing and lack of infrastructure can restrict housing supply in certain areas, causing house prices to increase rapidly. This is particularly the case in Auckland, where the population-to- dwelling ratio is higher than the rest of the country. The supply response to higher house prices has also been relatively slow in New Zealand (see OECD, 2011), but there are signs that housing completions have increased recently.

11. Reflecting rapid population growth and geographical constraints that limit the supply response, property prices in Auckland have risen sharply. Through December 2015, property prices increased by 22.5 percent in Auckland, compared with 14.2 percent for the country as a whole (Corelogic, 2016). Investor activity has been a key driver of house market activity (see Skilling, 2015) and new investor loans have grown strongly recent years, with low interest rates and strong competition among lenders stimulating investor lending growth, especially in Auckland. Parker (2015) lists planning requirements, fragmented ownership, cost of construction, and infrastructure as factors that have limited the supply response. Net migration and foreign demand for housing in Auckland is also a factor that may have supported house price increases and rising price-to-income ratios (see Spencer 2015).

12. A slow supply response to rising demand in some areas mitigates house price overvaluation concerns, but does not rule out large adjustments. While supply constraints do suggest that equilibrium property prices have risen, they do not rule out that demand is excessive, nor that it could fall sharply. House prices in New Zealand have varied by more than can be explained by the relatively stable deviation between population and housing supply. The UK, for example, had little supply response in the housing boom of the 2000s, but still saw a 20 percent fall.

Can the banking system withstand a housing downturn?

15. Funding. Although the core funding ratio has increased since the GFC, the banking system remains dependent on (offshore) wholesale funding. Given the prevalence of floating rate loans (see Figure 2), higher wholesale funding costs would be passed on to mortgage holders (see discussion of implications in stress tests below).

16. There is no sign of a generalized credit boom and estimates of credit gaps are small. Using financial gap estimates from the Borio et al. (2013) methodology, yield small gaps, although in some specifications, house prices appear to have an impact on the output gap measures – (see chart). However, some specific areas of concern have emerged as investor credit has picked up sharply lately, largely focused in Auckland (see Skilling, 2015b; Spencer 2015).

18. The banking sector would remain solvent, but unlikely to function well. In each scenario banks face an increase in funding costs, decline in credit quality and credit losses, with a significant adverse impact on profitability and declines in capital ratios. Losses on residential mortgages accounted for around one-third of total credit losses. These aggregate losses contributed to a material decline in the capital ratio of the banking system. While all banks remained above the minimum CET1 capital requirement, almost all banks would use capital conservation buffers and face constraints on dividend and bonus payouts. In such circumstances banks would face funding constraints and likely curtail lending. This would likely exacerbate an already extremely difficult macroeconomic situation.

19. Even abstracting from the impact on banks, a sharp fall in house prices would likely have major macroeconomic effects. This would operate through many channels (see Hunt, 2015 and Debelle, 2004). For example:

Using differences from averages across countries to derive estimates of over- or under-valuation can be problematic. One reason is that it assumes that the starting period was an equilibrium. Moreover, comparisons of price-to-income ratios are difficult owing to different national definitions of housing coverage and household disposable income.

Windsor et. al (2013) find that the removal of credit constraints (consumption rises with home prices due to households' ability to borrow more, given more valuable collateral), and the related buffer-stock savings argument (higher home prices act as a form of precautionary savings for low-saving households, allowing them to increase spending) are key channels through which house prices affect spending

Data sources are described in Igan and Loungani (2012).

(In percent of total lending) 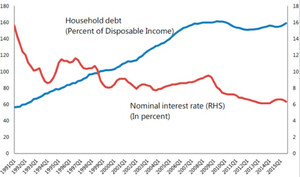 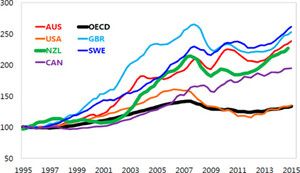 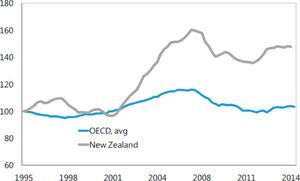 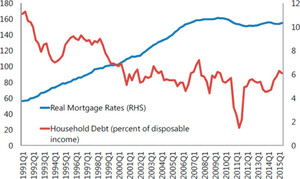 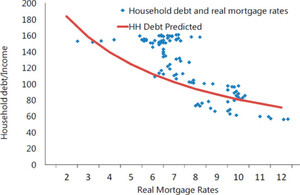 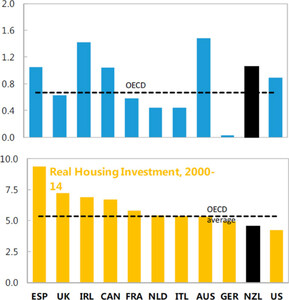 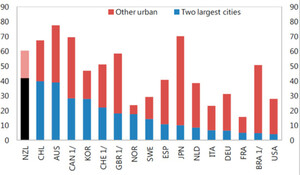 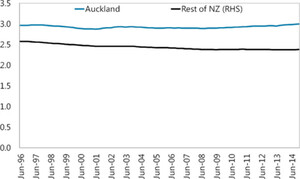 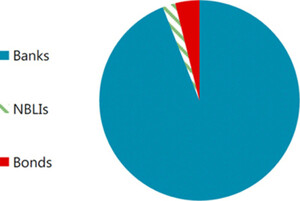 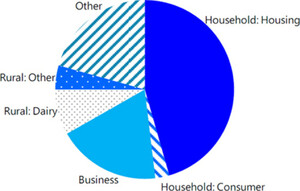 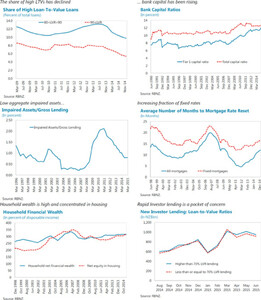 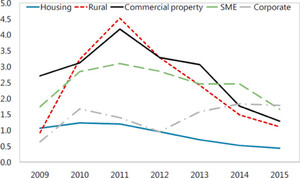 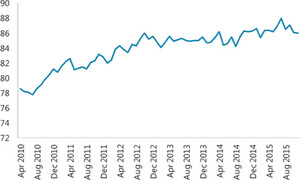 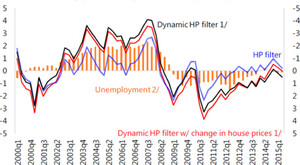