Overall macroeconomic conditions have continued to improve, but challenges remain. Economic activity rebounded in 2015, helped by a very good agricultural year. Fiscal and external imbalances have declined and reserve buffers are building up. While poverty, unemployment rates, and inequality have decreased in recent years, much remains to be done, including to reduce unemployment among the youth and to increase female labor participation. The outlook remains subject to domestic and external risks, related in particular to reform implementation, weak growth in key trading partners, and a potentially volatile international environment.

Overall macroeconomic conditions have continued to improve, but challenges remain. Economic activity rebounded in 2015, helped by a very good agricultural year. Fiscal and external imbalances have declined and reserve buffers are building up. While poverty, unemployment rates, and inequality have decreased in recent years, much remains to be done, including to reduce unemployment among the youth and to increase female labor participation. The outlook remains subject to domestic and external risks, related in particular to reform implementation, weak growth in key trading partners, and a potentially volatile international environment.

In the context of low growth in the euro area affecting economic activity, exports, tourism, and remittances, and heightened global uncertainty, Morocco continues to strengthen its fundamentals and buffers and to reduce vulnerabilities, while maintaining a broadly satisfactory growth performance. This owes much to the authorities’ sound macroeconomic and financial sector policies, supported by strong structural reform implementation. In this context, the PLL has provided a useful insurance against exogenous shocks, and the authorities have continued to treat it as precautionary. We thank staff for their concise report for this third PLL review, and share their assessment that the program remains on track, and that Morocco continues to meet the eligibility criteria for the PLL and for exceptional access. The authorities believe, however, that staff did not go far enough in recognizing the major leap forward in strengthening the external and fiscal positions since the first PLL was approved in July 2012, and even more decisively since approval of the second PLL in July 2014.

Performance under the PLL and Outlook

Performance under the 2014 PLL was satisfactory. The end-September indicative targets for the fiscal deficit and net international reserves were met with a wide margin. As indicated during the combined Article IV-Third review mission last November, the authorities’ strengthened revenue collection efforts, and continued tight control over wages and other recurrent expenditures have helped offset the shortfall in grants estimated at 0.6 percent of GDP and achieve the end-December deficit target of 4.3 percent of GDP. Excluding grants, fiscal adjustment in 2015 amounted to 1.7 percent of GDP, much higher than the 1.1 percent envisaged under the program.

As projected during the second review, growth in 2015 is estimated at around 4¾ percent, and inflation at 1½ percent. Partly reflecting lower oil prices, the current account deficit is estimated at about 1½ percent of GDP, which is half the projected level, notwithstanding lower grants. The end-December 2015 gross official reserves are higher than projected at close to 7 months of imports. Monetary policy continues to strike the right balance between low inflation and credit demand growth on the one hand, and heightened global uncertainty on the other, and Bank Al-Maghrib continues to closely monitor domestic and external developments, while ensuring adequate financing of the economy. Moreover, significant progress is being made to further strengthen financial soundness and resilience and improve access to finance, in particular for SMEs.

The near-to medium-term outlook is favorable. Growth is projected to be lower in 2016 than in 2015, with the return of agricultural output to trend after the exceptional cereal crop last year, and to accelerate thereafter to close to 5 percent over the medium-term. Inflation should remain low, and the current account deficit should decline to 0.5 percent of GDP in 2016 before stabilizing at around 1½ of GDP over the medium-term, with continued strong performance of FDI contributing to further reserve build up. Official reserves are projected to reach close to 8 months of imports in 2016, equivalent to 129 percent of the standard ARA metric or 180 percent of the adjusted metric. The fiscal position should continue to improve, anchored by a deficit target of 3 percent of GDP in 2017 and a public debt-to-GDP target of 60 percent by 2020. Fiscal policy in 2016 is consistent with these objectives, and the programmed deficit of 3.5 percent of GDP is well within reach. Downside risks remain, mainly from exogenous shocks, but the comfortable external buffers, supported by continued strong policy implementation and PLL resources, if needed, should mitigate these risks.

The authorities welcome staff assessment that Morocco continues to perform strongly in monetary policy, financial sector soundness and supervision, and data adequacy. However, they consider that Morocco also performs strongly under the external position and market access criterion with no sign of even limited underperformance, and that the limited underperformance in the fiscal position has declined markedly.

It is the authorities’ view that Morocco performs strongly under the four relevant criteria:

Criterion 1: The external position is sustainable: The current account deficit declined from 9.5 percent of GDP in 2012 to 5.7 percent in 2014 and is estimated at 1.4 percent in 2015. Not all this decline was due to lower international oil and other commodities prices, the subsidy reform and fiscal consolidation more generally also played an important role. Exports other than phosphates and derived products and agricultural products also increased from 8.2 percent of GDP to 10 percent during this period, reflecting successful diversification efforts and the correction of the earlier small appreciation of the dirham, with the exchange rate now fully in line with fundamentals. External debt remains low, sustainable, and resilient to shocks, as shown in Figure 1 of the Article IV report. This is true not only in the future, as inferred in ¶14 of the PLL review report, but has been the case for several years. Ongoing preparations for a more flexible exchange rate policy bode well for further strengthening of the external position going forward.

Criterion 2: Morocco’s capital account position is dominated by private flows, even though with declining current account and budget deficits, the need for market financing, in particular for the sovereign, is relatively limited. Moreover, FDI remains robust, as indicated in the report.

Criterion 3: Morocco has a strong track record of steady sovereign access to international capital markets at low spreads and long maturities, as illustrated in the staff paper.

Criterion 4: Morocco’s reserve position is strong. Not only are reserves estimated at 111 percent of the standard ARA metric, but they amount to 154 percent of the metric adjusted for capital controls.

In sum, the authorities are disappointed that despite the significant improvement since 2012, Morocco’s external position has not been assessed as strong.

The fiscal position is much stronger than in 2012. Public debt continues to be sustainable, despite some increase since 2012, and has stabilized at around 63-64 percent of GDP since 2014, and should resume its previous declining trend in 2017. More importantly, the complete phasing out of all energy subsidies, with the exception of the very sensitive butane segment, and the liberalization of their prices eliminate a major source of vulnerability and significantly and durably improve the budget position. The approval of the new organic budget law is also a major achievement toward strengthening the budget process and improving transparency, accountability, and efficiency. It introduces a fiscal rule and multi-year and results-based budgeting, while eliminating key vulnerabilities, including those related to the non-binding character of wage bill appropriations and the carry-over of the capital budget.

While recognizing that reforms have progressed further, staff points to delays in pension reform and adoption of the new central bank law. The authorities wish to indicate that their resolve to reform the major civil service pension system has been unwavering, as evidenced by the inclusion of the cost of higher employer contributions under the envisaged reform in the 2015 budget and again in the 2016 budget. However, despite several public debates on the issue and many rounds of discussion with social partners, trade unions have maintained strong opposition to the reform, unless major concessions are made to shift more of the cost of the reform to the budget. The government has maintained a firm position on the issue to protect fiscal sustainability, and has finally decided to move ahead with the reform by adopting the draft legislation earlier this month for its submission to the parliament. In view of the high sensitivity of the issue, discussion in the parliament is expected to take time, which is why implementation has been set for January 1, 2017. The government is firmly determined to do the utmost to ensure effectiveness of the reform and restore balance of the civil service pension system, as projected, without creating additional pressures on the budget. Moreover, as part of the broader pension reform system, a draft law was also approved by the cabinet extending the coverage of the pension system to the self-employed and other non wage earners. The ultimate goal of the reform is to ensure long-term viability of all the pension system and consolidate the numerous funds into two poles, one for the public sector, and one for the private sector.

On the central bank law, after reaching consensus on the draft between Bank Al-Maghrib and the Ministry of Economy and Finance, its finalization by the Secretariat General of the Government (SGG), which is responsible for legal review of all legislation and related regulations before their submission to the cabinet, took longer than expected because of the heavy legislative agenda, in view of the 2016 deadline for adoption of a number of organic laws and other key pieces of legislation required under the new constitution. The Ministry of Economy and Finance will continue to work closely with the SGG toward early presentation of the draft to government for adoption and transmission to parliament.

Further Engagement with the Fund and Exit

The authorities intend to continue to strengthen external and fiscal buffers and their policy framework to enhance the economy’s resilience. However, while risks from lower growth in the euro area, increase in oil prices, and monetary policy normalization in the US may have receded, uncertainty and financial market volatility have increased. The authorities will continue to treat the PLL as precautionary, and intend to assess in the coming months whether further recourse to an insurance-type mechanism will be needed at the expiration of this facility in July as well as the level of related access. In this regard, and depending on external conditions and risks, staff assessment that such access, if still needed, may be lower than under the current arrangement seems reasonable. The authorities reiterate their deep appreciation to staff, management, and Executive Directors for their support and advice. 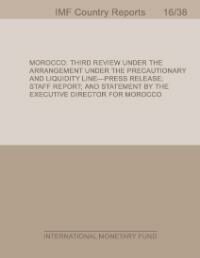 Morocco: Third Review under the Arrangement under the Precautionary and Liquidity Line-Press Release; Staff Report; and Statement by the Executive Director for Morocco
Author: International Monetary Fund. Middle East and Central Asia Dept.