This Selected Issues paper analyzes fiscal multipliers in Mexico. Estimates of fiscal multipliers--obtained from state-level spending--fall within 0.6-0.7 after accounting for dynamic effects. However, the size of multipliers varies with the output gap. The planned fiscal consolidation-under the estimated multipliers-is projected to subtract on average 0.5 percentage points from growth over 2015-20. However, there are offsetting effects. The positive growth impulse of lower costs on manufactured goods production is estimated to reach 0.5 percentage point in 2015 and 2016, largely offsetting the impact of fiscal consolidation on growth in the near term.

This Selected Issues paper analyzes fiscal multipliers in Mexico. Estimates of fiscal multipliers--obtained from state-level spending--fall within 0.6-0.7 after accounting for dynamic effects. However, the size of multipliers varies with the output gap. The planned fiscal consolidation-under the estimated multipliers-is projected to subtract on average 0.5 percentage points from growth over 2015-20. However, there are offsetting effects. The positive growth impulse of lower costs on manufactured goods production is estimated to reach 0.5 percentage point in 2015 and 2016, largely offsetting the impact of fiscal consolidation on growth in the near term.

Trade and Financial Spillovers to Mexico1

Economic activity in emerging markets has slowed down in recent years, which has been partly attributed to less favorable external conditions. For Mexico, close linkages with the U.S. has benefited Mexico over the years, but also exposes the country to fluctuations in U.S. economic activity and changes in U.S. monetary conditions. Moreover, the open capital account and large foreign holdings of Mexican assets expose Mexico also to financial spillovers, including the possibility of abrupt changes in capital flows. A Structural Bayesian VAR analysis for the period of 2001Q3–2015Q2 suggest that while increases in U.S. growth are transmitted over one-for-one to Mexico (a cumulative impact of 1.22 percent after 8 quarters), an increase in emerging market risk premiums are transmitted less than one-for-one (a cumulative impact of -0.65 percent after 8 quarters). The results suggest that Mexico could outgrow a negative shift in market sentiment toward emerging markets if accompanied by a pickup in US growth. Moreover, by using a decomposition of the U.S. long-term interest rates we find that a rise in U.S. bond yields that is not accompanied by higher U.S. growth has a negative effect on Mexico’s output.

1. Mexico has close trade and financial ties with the global economy, and especially with the United States. The U.S. is by far the largest recipient of Mexico’s manufacturing and agricultural exports, and is also the main source of portfolio and foreign direct investment flows to Mexico, possibly explaining the close correlation of the business cycles of the two economies. Export growth has been a key driver of economic activity in Mexico, with significant spillovers to domestic demand. Focusing on financial linkages, international investors held about half of total government debt in mid-2015 (including 36 percent of local-currency government bonds), as well as a large share of corporate bond debt. Mexico’s gross portfolio investment liabilities account for 37 percent of GDP, of which 25 percent of GDP are debt securities.

2. This study quantifies the spillover effects of external shocks on Mexico’s economic activity. The next two sections describe in more detail the trade and financial linkages between Mexico and the United States. After that, a Bayesian vector autoregression is estimated to evaluate the impact of external shocks (real and financial) on Mexico’s GDP and other domestic variables. Finally, the paper uses a decomposition of the drivers of changes in U.S. long-term interest rates into real, monetary, and risk shocks, and looks at the differential effects of these shocks on Mexico’s growth and long-term interest rates.

3. Since the signing of the North American Free Trade Agreement (NAFTA) in 1994, Mexican exports have increased nearly fivefold. The automobile industry and the telecommunication sector accounted for a large part of the expansion. Mexico’s share of world exports also increased somewhat after NAFTA, and has stabilized around 2 percent more recently. The U.S. remains Mexico’s main trading partner, accounting for 80.5 percent of total exports. Canada accounts for 2.7 percent, and the next three largest partners, Spain, China, and Brazil account for about 1½ percent each.

4. Mexico’s total share in the U.S. market has been stable at around 10 percent. There has been a temporary decline in the early to mid-2000s, when China started gaining market share in the U.S. after entering the World Trade Organization (Chiquiar, Fragoso and Ramos-Francia, 2008). However, Mexico has regained market share in recent years, partly due to changes in relative labor costs in favor of Mexico.

7. Mexican long-term interest rates and spread dynamics are influenced significantly by external developments. Long-term yields on 10-year domestic-currency government bonds in Mexico have fallen from 11 ½ in 2001 to around 6 percent by mid-2013. During this period, U.S. yields also dropped from around 5 ½ percent to 3 ½ percent.2 Nonetheless, since mid-2013, while U.S. yields continued to drop, Mexican yields rose, in part as global attitudes to risk, as approximated by EMBI global spreads, affected also Mexico’s risk spreads.

D. The Impact of Foreign and Domestic Factors on GDP

9. A structural BVAR is estimated to quantify the size of growth spillovers and the impact on various transmission channels (trade and financial). Following the approach used in WEO April 2014 (Chapter 4), this allows an estimation of the domestic and external factors in explaining output growth. The Bayesian VAR approach is particularly suited, because it allows the handling of a large number of variables and lags in a relatively small sample. The sample covers the quarters from 2001Q3 to 2015Q2.

11. The SBVAR is identified using the Cholesky decomposition. The ordering of the endogenous variables yt follow:

13. The role of internal factors has increased over 2013–14. The historical decomposition of real GDP growth also suggests that external factors do not explain the slowdown in domestic growth in recent years (explaining only 20 percent of the overall negative contribution to growth in 2013Q1–2015Q2).5 This finding suggests that the role of internal factors could have risen in the past two years.6 Interestingly, this phenomenon seems to be common to other large emerging markets (e.g., Brazil, China, India) where external factors could not account for the slowdown in growth in the recent years (WEO, 1014). Very recently, the negative contribution of external factors to growth started to increase. Moreover, in recent months, a stabilization of oil production has been observed and the construction sector began to recover since the second half of 2014. Thus, in 2015, a faster growth of domestic demand is registered.

14. Increases in U.S. growth are transmitted over one-for-one to Mexico. On impact, a 1 percentage point shock in U.S. growth (equivalent to 1.8 standard deviations) raises Mexican growth by 0.5 percentage point. The cumulative effects remain positive beyond the short term and reach 1.22 after 8 quarters. The result is somewhat in line with the average impact of world growth on Latin America (Osterholm and Zettelmeyer, 2007). Despite a different dynamic, the cumulative impact of an increase in U.S. growth on Mexico is similar to the response of U.S. growth with respect to its own shock, also reflecting the effect of the propagation of the shock through the U.S. economy.

15. Meanwhile, increases in emerging market’s risk premia are transmitted less than one-for-one. A 100-basis point increase in the composite EMBI spread (equivalent to 2.2 standard deviations) reduces Mexico’s growth by 0.62 on impact. The cumulative effects remain negative beyond the short term reaching -0.65 after 8 quarters. The analysis suggest that with a pickup in U.S. growth, Mexico could outgrow the impact of “some” negative shift in market sentiment toward emerging markets.

E. A Closer Look at Changes in Monetary Conditions in the U.S.

16. U.S. long-term interest rates reflect the expected path of U.S. monetary policy, expected U.S. economic performance, and general risk attitudes. Each of these components may affect Mexico differently; therefore, we consider a decomposition of the U.S. 10-year bond yield into real, monetary, and risk shocks following Buitron and Vesperoni (2015), which allows the identification of these shocks controlling for changes in risk-appetite.7

17. The role of money shocks in explaining U.S. 10-year bond yield, which peaked after the taper talk, faded by end-2014. The decomposition highlights the relative contribution of money shocks in the aftermath of the taper talk in May 2013. Prospects of a better economic outlook seem to have played a greater role by end-2013 during the subsequent taper announcement (see WEO, 2014).

18. We assess the differential impact of money and real shocks in economic activity and financial variables. The model described above is estimated now considering the following external variables—real shocks, money shocks, VIX—while keeping the same set of domestic variables.8

19. U.S. monetary policy shocks spill over into Mexican yields and initially dampen Mexican growth, while U.S. real shocks are positive for Mexican growth and have a smaller impact on yields. Figure 1 shows the responses of a 100-bps increase in the U.S. bond yield, with the red (blue) line displaying the impact of real (money) shocks. Unexpected stronger economic prospects in the U.S. associated with an increase in the U.S. yield leads to higher spreads and improved economic activity. The shocks also boost investors’ risk-appetite, which causes capital to flow to Mexico and the currency to appreciate in real terms. Money shocks are followed by higher domestic bond spreads in Mexico, a (small) real depreciation of the currency, a decrease in gross portfolio inflows, and lower real GDP growth.

20. External factors played an important role in driving the drop in growth during the global financial crises but less so in recent years. Shocks idiosyncratic to Mexico during 2013–14, such as the contraction of construction activity in 2013, and lower oil production, are possible explanations. Looking ahead, Mexico remains well placed to gain from a pickup in U.S. growth.

While higher U.S. rates have coincided with wider spreads on foreign-currency debt in EMs (Arora and Cerisola (2001), Uribe and Yue (2006)), increased foreign investment in local bond markets could have contributed to greater linkages between U.S. and domestic yields in Mexico (see next paragraph for a discussion).

Modified “Minnesota priors” (Litterman, 1986) were used where each variable is assumed to follow a first-order autoregressive process with independent, normally distributed errors and coefficients of 0.8. The relative weight of the prior, as in Sims and Zha (1998), was set to , where T is the number of observations, k is the number of endogenous variables and the p is the lag length.

The remaining shocks are treated as residual and are termed internal. As such, the residual shocks could also partly embody other factors such as common or exogenous shocks (e.g., natural disasters).

By conducting a similar exercise but including U.S. and Mexico Industrial Production instead of real GDP growth, we might better capture trade linkages across both economies. The exercise yields similar qualitative results but it suggests a lower positive contribution of external factors in the last 5 quarters of the sample period (see Appendix I).

Some Mexico specific factors that could have helped explain the deceleration in activity, which are expected to revert going forward, include the reduction of oil production in 2013 and 2014 as well as the decrease in housing construction due to financial problems in some housing development companies.

Here we focus on the impact of changes in monetary conditions in the U.S. although euro area shocks are also computed. In a first stage, stock prices and bond yields in the U.S. are stripped out from risk-appetite shocks measured by the VIX. In a second stage, real and money shocks within the U.S. are identified as in Matheson and Stavrev (2014).

We convert the identified monthly shocks to quarterly frequency by summing the shocks within each quarter. The sample period is 2001Q3-2014Q4.

(Deviations from average, in percent)

(Deviations from average, in percent) 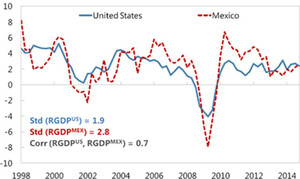 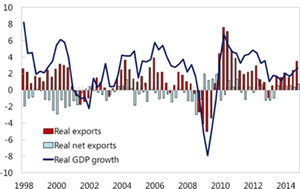 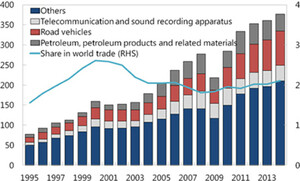 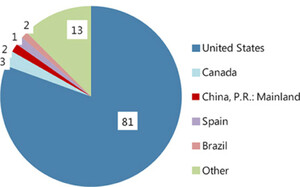 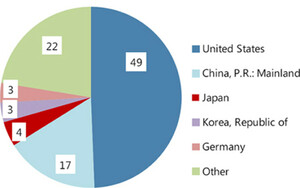 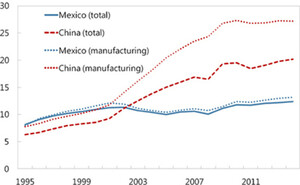 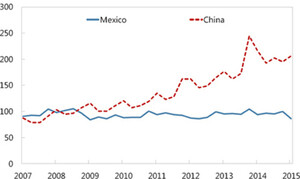 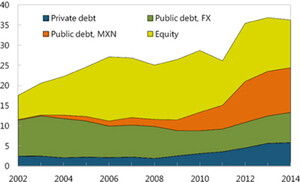 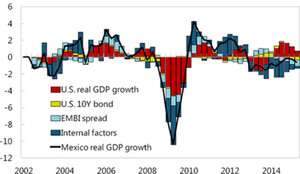 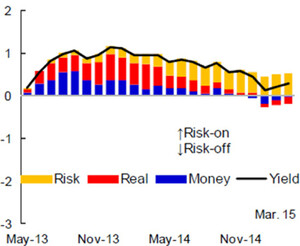 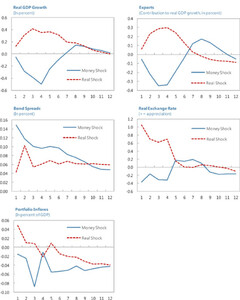 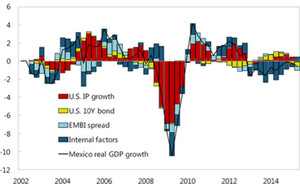 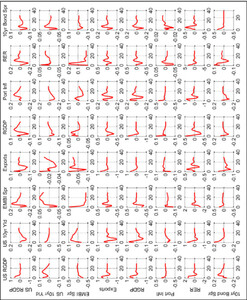 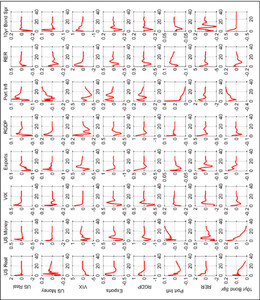