Government Spending in Bosnia and Herzegovina1

The size of the public sector in Bosnia and Herzegovina (BiH) is one of the largest in the region, mostly owing to a complex and highly decentralized governance structure. BiH spends a greater share of public resources on current spending items, notably on wages and social transfers. Moreover, poorly targeted social benefits generate adverse incentives with respect to informality and labor force participation. In order to enhance economic growth, BiH will need to refocus its spending and increase its efficiency, notably of spending on human and physical capital.

A. Level of Government Spending

1. BiH’s fiscal consolidation in the aftermath of the global financial crisis has been largely accomplished through efforts at the central government level. Prudent fiscal policies, supported by IMF arrangements, have resulted in a substantial narrowing of the overall budget deficit. From a peak deficit of around 6 percent of GDP in 2009, significant consolidation efforts successfully brought down the deficit to 2 percent of GDP in 2013. A major natural disaster caused an increase in the deficit to 3 percent of GDP in 2014. Nonetheless, these positive developments mask some worrying underlying trends: while central governments have managed to achieve budget surpluses in recent years, spending by lower level of governments and social funds, and on foreign-financed investment projects have persistently generated deficits and have contributed to increasing public debt levels.

2. Notably, increasing government outlays on recurrent expenditures have hindered the authorities’ consolidation efforts. General government current expenditures rose sharply after 2005 following the introduction of a BiH-wide VAT in 2006 that provided a sizable and permanent increase in government revenues, and following the start of the privatization process in the Republika Sprska (RS) in 2006–07, which led to significant windfall for that government’s coffers. Subsequently, the global financial crisis also led to additional government spending to mitigate the impact of the shock. As a result, overall government current expenditures increased from an average of around 38.5 percent of GDP over 2000–05 to around 41.5 percent thereafter. Most of the increase in spending took the form of higher public sector wages and increased, and poorly targeted, social benefits, as well as higher spending on goods and services.

3. As a result, BiH has one of the biggest government sectors in relation to its peers. At over 41 percent of GDP, the size of BiH’s public sector ranks second in the region, only behind Croatia’s, and it is substantially larger than that of more advanced Emerging Europe economies.

4. On the other hand, spending on public investment has been gradually declining. BiH continues to face significant infrastructure needs, mainly road construction and energy generation. Investments in these areas would not only make BiH a more attractive place to invest, but would also raise the country’s growth potential. However, while sizable financial resources are still needed to fill this investment gap, the share of public capital spending has been decreasing over time, from around 8 percent of average in the pre-crisis period to less than 7 percent thereafter. Moreover, the financing of this public investment has gradually shifted from own resources to debt-generating foreign financing. The three governments have steadily been reducing capital spending in their central government budgets, while current spending continued to grow.

5. BiH needs more investment in human and physical capital to accelerate real GDP growth. Given limited fiscal space higher capital investment is only possible if current spending levels are reduced relative to their current level. While a public sector is critical for growth, efficiency of public spending is a key factor. The public sector in BiH is not only relatively large, but also not very efficient (see below). This is a reflection of the large size of public spending, but also of an inefficient structure of spending. Therefore, while the size of the public sector needs to be reduced, redeploying resources to invest in human and physical capital will also be critical in the years ahead.

B. Structure and Efficiency of Government Spending

6. Compared to regional peers, BiH spends substantially above average on public sector wages and goods and services. Public spending on wages and consumption of goods and services accounts for over 55 percent of total current expenditures in BiH, considerably larger than the 38 percent spent on average by BiH’s peers. Meanwhile, spending on social benefits is considerably lower in BiH than elsewhere in the region. This high spending on wages and public consumption complicates the country’s efforts to streamline the size of the public sector.

7. BiH also spends a greater share of GDP on compensation of public sector employees in relation to peers. BiH spent over 12 percent of GDP on public sector wages in 2013, a substantially greater amount than countries such as Macedonia and Albania, which spent around 5 percent of GDP in the same year. Moreover, while many countries have managed to reduce public sector wages as a share of GDP in recent years, in BiH this ratio has increased considerably. Two factors explain these developments: (i) public sector payrolls have continued to increase, and (ii) wages in the public sector, and in public administration in particular, are very high compared to average pay levels in the economy. An undesirable outcome of these wage discrepancies in BiH is that public sector employment has become significantly more attractive than in the private sector, creating many economic distortions and stifling private sector development.

8. The share of capital spending is relatively high in BiH, although it has been decreasing in last few years. With large infrastructure needs, BiH’s public sector spends more on capital investment as a share of GDP than its peers. However, a worrying trend has emerged in recent years and financing has relied ever more on foreign funds. Reversing this trend and boosting the amount of public sector resources allocated to infrastructure spending would support long-term growth and job creation.

9. Spending on social assistance, meanwhile, remains at the low end compared to elsewhere in the region, although this masks significant underlying differences. Social benefits are those transfers in cash or in kind aimed at protecting the population against certain social risks. Social benefits include medical services, unemployment compensation, or social security pensions, and they vary across countries in their level and coverage. While total spending on social benefits in BiH is at the low end relative to peers, some significant underlying differences exist: while spending on particular social benefits, such as health care or non-contributory social assistance, stands out in the region, spending in other areas, such as education, old-age pensions, and active labor market programs, are at or below the regional average.

10. Large and increasing public health care expenditures in BiH also reflect a highly fragmented and inefficient system. BiH’s spending on public health in percent of GDP is now the highest in the region at over 7 percent of GDP. Moreover, while expenditures elsewhere have remained flat or even declined in recent years, public health spending in BiH has continued to increase. High health care spending in BiH is the result of the highly fragmented nature of the health systems in BiH, as entities are responsible for health regulation, organization, financing, and service delivery.2 Moreover, the responsibility for health services in the FBiH has been further passed down to the cantons. Therefore, considering also the health systems in the RS and the Brcko District, BiH has a total of 13 ministries of health and an equal number of health insurance funds, all operating independently. This all leads to substantial duplication and inefficiencies, hindering coordination and savings within the overall health system. Moreover, since these high expenditure levels are mostly financed from social security contributions, contribution rates in both entities are the highest in the region.

11. Nonetheless, BiH’s health indicators are below average, confirming the need for structural improvements to raise the efficiency of public health spending. Despite the large amount of financial resources devoted to health care, measures of efficiency and quality of health care indicate that BiH lags behind regional peers. Moreover, there are large discrepancies in efficiency and quality across the two entities and even across cantons, mostly explained by differences in spending levels. Despite large expenditures, the numbers of medical staff and hospital beds in BiH remain low in comparison to regional peers and more advanced Emerging Europe economies. On the other hand, the number of non-medical staff working in health care facilities is on the high end relative to peers.

12. The education sector in BiH also suffers from fragmentation and inefficiencies, and does not provide the skills required in the labor market. BiH spends about 5 percent of GDP on education, in line with comparable countries.3 However, a complex governance and management structure holds back progress in the sector: there are 14 ministries of education in BiH (11 in the FBiH, 1 at the state level, and one each in the RS and Brcko District). As with health care, this system for education leads to substantial duplication and inefficiencies. Most of the education budget in BiH—around 80 percent—is spent on wages and not on system development or material resources. As regards educational outcomes, BIH’s enrollment rates are relatively high for primary and lower secondary, compared to other countries in the region, but substantially below the regional average at the upper secondary and tertiary levels. This latter fact, coupled with declining levels of vocational and technical training, results in a widening mismatch between education and labor market skills required by businesses, adversely impacting the country’s growth potential.

13. Meanwhile, labor market programs remain severely underfunded. Structurally high unemployment remains one of the key challenges confronting BiH. Against this backdrop, active labor market programs aimed at boosting skills and enhancing the employment opportunities of the unemployed, including through training and education, can play a useful role in raising employment levels and bringing people back into the labor force. However, BiH allocates very little financial resources to labor market programs, a fraction of what is spent by regional peers such as Serbia, Croatia, Montenegro, and Macedonia.

14. Spending on non-contributory social assistance has long reached fiscally unsustainable levels in BiH. BiH’s spending on non-contributory social assistance4 is by far the largest in the region and largest in Emerging Europe at close to 4 percent of GDP. Moreover, as indicated by World Bank analysis, this amount could be as high as 7 percent of GDP if spending by cantons and municipalities on their own non-contributory benefit programs is included. Spending on war veterans and disability benefits represent the bulk of social assistance transfers, while “civilian” programs are small and underfunded. Given the size and age profile of the veteran population, looming liabilities on account of veteran programs cast a large shadow over limited fiscal resources.

See UNDP’s “Progress towards the Realization of Millennium Development Goals in BiH” (2013). 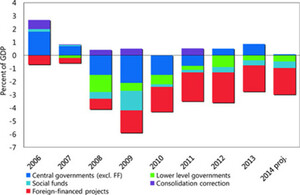 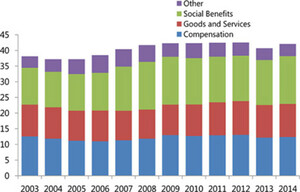 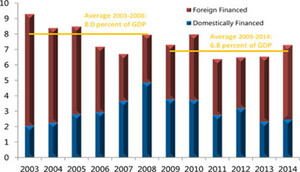 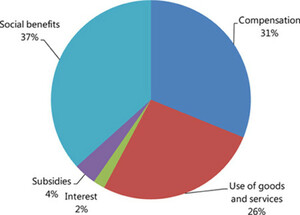 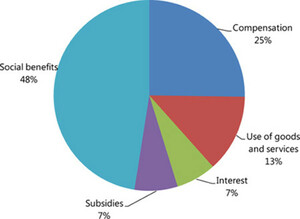 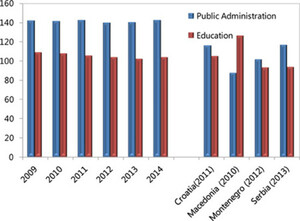 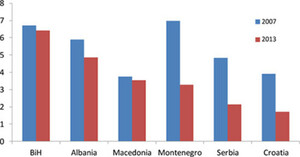 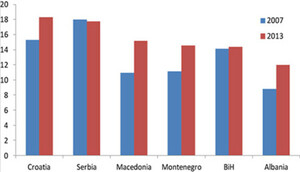 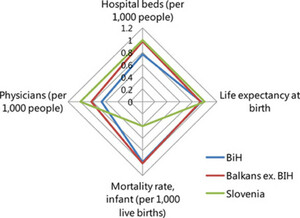 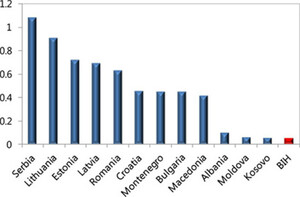 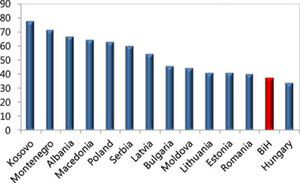 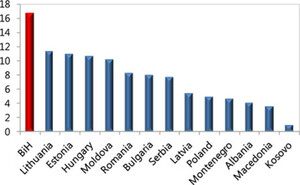