Financial Inclusion, Growth, and Inequality in Republic of Congo4

Underdeveloped financial systems and lack of access to financial services are obstacles to growth in lower income countries. The depth of the financial system of the Republic of Congo is comparable to that of the Central Africa Economic and Monetary Community (CEMAC). However, it lags well behind its regional and global peers on aspects of financial inclusion such as access to financial services by households and firms. An empirical exercise for the CEMAC region as a whole indicates that reducing the constraints on financial inclusion would have differential impacts on growth, productivity and inequality. Policies aimed at lowering collateral requirements, reducing firms’ participation costs, and lowering intermediation costs could increase firms’ access to credit and would significantly boost activity. Lower collateral requirements and intermediation costs would mainly benefit firms that are already in the financial system (the “haves”). Lower participation costs would benefit all firms (including the “have-nots”). In addition, the additional economic growth resulting from greater financial inclusion would expand the tax base. This could support higher pro-poor and pro-growth government spending.

1. Access to financial services by the population and business is a key driver of sustained growth and poverty reduction. It is well known that in low and middle income countries, shallow financial systems hold back growth. Companies and households need bank accounts to conduct basic financial transactions and to build precautionary savings. They also need access to credit on reasonable terms to operate and expand. Firms, particularly SMEs are typically engines of growth and employment creation. They employ a large share of the workers in developing countries (Ayyagari, Demirgüç-Kunt, and Maksimovic, 2011). Moreover, there is a relationship between inequality and financial inclusion, as significant parts of the population tend to have fewer economic opportunities due to restricted access to financial services.

3. The depth of the Congolese financial system is comparable to that of the CEMAC. As measured by the ratio of private credit to GDP (Figure 1, middle), Congo experienced a limited degree of financial deepening over the period 2009–2013. That being said, the Congolese financial system still lags behind in comparison to peer countries on this measure, thereby placing a handbrake on economic growth and development.

4. The relative inefficiency of the Congolese financial system is indicated by the comparatively high bank overhead costs. Shortcomings in credit information result in higher client screening costs for financial institutions. The poor business environment and the lack of public credit registries in Congo is reflected in the high overhead costs of Congolese banks, which are comparatively speaking amongst the highest in the world.

5. Access to financial services in Congo is also highly constrained. A variety of measures from the IMF’s Financial Access Survey indicate that access to financial services in Congo lags behind that of regional and global peers (Figure 2). For example, the number of bank branches and automatic teller machines (ATMs) in Congo is comparatively low. This means that the number of borrowers/lenders, and hence the stock of deposits and loans, is also lower than in comparator countries.

6. The banking sector’s contribution to firms’ investment programs appears limited (Figure 3). Enterprise surveys indicate that while 87 percent of firms possess a bank account, only thirteen percent of firms access a loan or line of credit in Congo well-below the average for CEMAC and that of emerging and developing economies. Nearly 70 percent of loans in Congo require collateral. The value of the collateral on average significantly exceeds the value of the loan, pointing at the problems with the liquidation of the collateral. Loans from banks constitute only a small fraction of firms’ investment.

7. Compared to regional and global peers, access to finance in Congo is poor across all demographic groups (Figure 4). The Congolese tend to use bank accounts for business purposes more than the regional average. However this still falls far short of Congo’s global peers. The same may be said for other uses of bank accounts, such as receiving government payments and wages, as well as for sending/receiving remittances.

8. The lack of development of the financial system in Congo is reflected in the main deposits and payment methods used (Figure 5). This is shown by the comparatively widespread use of bank tellers for deposits in Congo, as well as the limited use of advanced payment services (checks and electronic methods).

9. The ability to save in Congo lags slightly behind the regional average, necessitating the use of loans for some everyday expenses (Figure 6). The number of survey respondents in Congo who were able to save (also for emergencies) in 2011 was lower than the region wide average and global peers. Hence, the level of outstanding loans for health or emergency purposes in Congo was higher than in comparators.

B. Constraints on Financial Inclusion

10. A micro-founded general equilibrium model developed by Dabla-Norris et al. (2015) is used to examine the most binding financial constraints on growth, productivity and inequality in the CEMAC countries (Box 1). These calibrations reflect CEMAC-specific data for 2009 on the fraction of firms with credit, the economy-wide non-performing loan ratio, and the spread between deposit and lending rates (Text Table 1).6 Due to data availability constraints, the model is calibrated to capture the specific features of firms in the CEMAC, rather than those of Republic of Congo. However, as noted above, Congo’s performance on these measures tends to rank lowest in the CEMAC region. The findings of the analysis can help guide policymakers in prioritizing between different financial sector policies in order to achieve their goals. The results for the CEMAC region are compared with the results from Dabla-Norris et al. (2015) which calibrates the model to six other developing countries, comprising three low-income countries and three emerging markets.

11. The relaxation of the constraints on different aspects of financial inclusion is found to have diverse impacts on growth, productivity and inequality. Based on the above model calibration, the effects of relaxing individually the constraints on financial participation, the capacity to lend and bank efficiency (see Box 1) on GDP, productivity, interest rate spreads, income inequality, percent of firms with credit and the NPL ratio, respectively, are assessed. These results for CEMAC are compared against those obtained for other countries in Text Table 2.

13. Lowering borrowing constraints is the most effective in increasing output, a result which is similar to results obtained for countries such as Uganda and Kenya. In particular, policies aimed at improving property and creditor rights and ensuring adequate enforcement of these laws, for example by introduction of collateral registries, could make banks more confident to lend to the private sector. This is because poorly designed and enforced creditor rights tend to discourage lending and encourage individuals to default. This would enable firms to borrow and invest more easily which in turn increases output and productivity as existing firms can operate at a larger scale.

14. The relaxation of credit constraints may, however, lead to a marginal increase in inequality. This is because addressing borrowing constraints would mainly allow firms that are already in the financial system and that have relatively higher income to borrow more. New small firms would continue to find it difficult to acquire credit. Banks in several CEMAC countries such as in the Republic of Congo are characterized by excess liquidity related to the monetization of the government’s foreign currency oil revenues. While the degree of competitiveness may also affect willingness to lend in the banking system (e.g. see Chirwa and Mlachila 2002), another key reason for holding back on lending to the domestic economy is weaknesses in legal and institutional frameworks. Under these circumstances, policies aimed at reducing collateral requirements, such as the introduction of collateral registries, could make banks more confident to lend to the private sector. However, to the extent that banking supervision is weak and/or commercial courts work slowly or do not exist, the relaxation of credit constraints and the resulting increased bank lending could lead non-performing loans (NPLs) to increase. Therefore, there is a tradeoff between growth and financial stability that needs to be carefully managed.

The model of Dabla–Norris et al. (2015) permits the examination of the different constraints on financial inclusion and the general equilibrium effects of relaxing these constraints on growth, productivity and inequality.

Moreover, each of these constraints on financial inclusion may be associated with different aspects of the policy environment. High collateral requirements often result from poor legal, regulatory and institutional frameworks that fail to adequately protect property and creditor rights and hence discourage lending. Elevated participation costs tend to reflected by poor rates of access to banking and financial services. High intermediation costs often stem from a lack of publicly available information on borrowers, for example through credit bureaus or credit registries. The model therefore permits the quantification of policy options for improving the different aspects of financial inclusion and illustrates the tradeoffs associated with different financial sector policies.

16. The expected paths of growth, productivity and inequality that arise from enhanced financial inclusion differ by the type of financial constraint (Figures 7–9). Starting from the initial position of CEMAC (Figure 7–9, small triangle), lowering participation and collateral constraints would induce steady increases in GDP, TFP and the percent of firms with credit. The expected paths of inequality are, however, more varied. In CEMAC, a reduction in participation costs is disproportionally more beneficial for constrained workers and entrepreneurs without access to credit, which enables relatively poorer agents to earn a higher income, driving down the Gini coefficient. Relaxation of collateral constraints tends, however, to slightly increase inequality, as talented entrepreneurs can take more leverage and increase their profits. Increasing intermediation efficiency disproportionally benefits highly leveraged firms, who already have higher income than workers, thus slightly increasing inequality.

17. The government of the Republic of Congo can play an important role in facilitating the potential output and efficiency gains from relaxing financial frictions. The biggest gains for growth and productivity would be yielded by relaxing borrowing constraints. Concretely, this would involve strengthening collateral registries, improving the protection of creditors’ rights, regulating the conduct of banks, and putting in place recourse mechanisms to protect borrowers. Firms large and small will benefit from a stronger legal and regulatory framework for banks and the non-bank private sector.

18. Relaxing constraints on financial sector participation are also important for harnessing growth and productivity gains. This could be achieved for example through reducing transaction costs and documentation requirements, increasing competition, as well as encouraging banking penetration and the offering of low-fee bank accounts. Enhancing information sharing can also be expected to provide important benefits. In this regard, the government can set standards for disclosure and transparency, promote credit information–sharing systems and collateral registries, and educate and protect consumers.

19. Increased inequality could be addressed through government redistribution. Lowered borrowing constraints and increased financial intermediation efficiency could lead to greater inequality as firms that are already in the financial system would initially likely benefit the most. However, the resulting additional economic growth expands the tax base thereby providing an opportunity for the government to raise more revenue. These funds could be used to support higher pro-poor and pro-growth government spending. Provided this is supported by ongoing reforms to increase the quality of government spending, this could put the economy on a virtuous trajectory with higher and more-equitable growth.

The performance of Congo against its peers along many of these dimensions has been outlined above.

CEMAC: Lowering the Cost of Intermediation 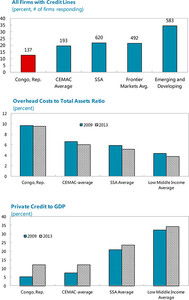 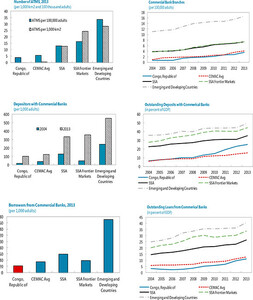 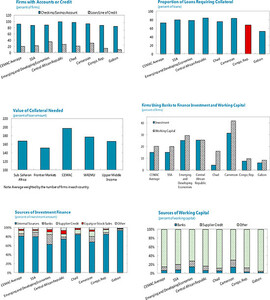 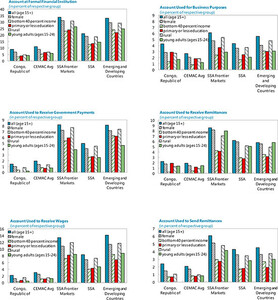 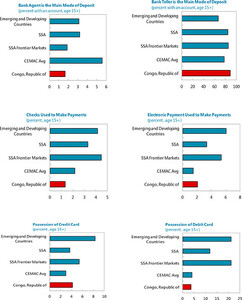 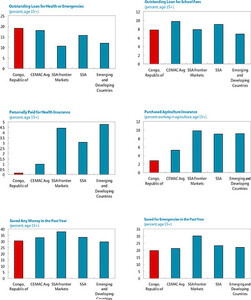 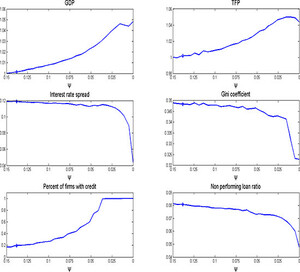 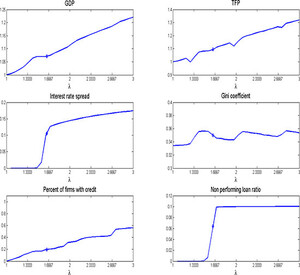 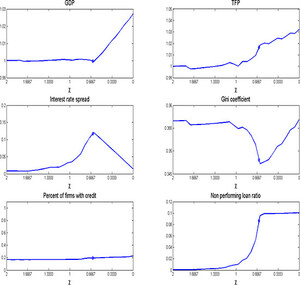