The recent decline in oil prices has introduced interesting dynamics to Norwegian inflation. On one hand, lower oil prices put a brake on mainland growth momentum, which is dependent on demand from the off-shore oil and gas sector. On the other, the significant depreciation of the Norwegian krone that accompanies low oil prices may lead to inflationary pressures. This note examines to what extent exchange rate depreciation is passed through to imported and overall consumer prices in Norway, and builds a simple Phillips curve-based model for forecasting inflation that incorporates the role of the exchange rate.

1. Understanding exchange rate pass-through (ERPT) is important for monetary policy. Measured by the import-weighted nominal effective exchange rate, Norway’s exchange rate has depreciated by over 10 percent between June 2014 and March 2015, largely owing to the expectation that falling oil prices will adversely affect the oil- and gas-dependent mainland economy. The Norges Bank’s recent Monetary Policy Reports cited the weakening growth outlook and krone depreciation as two opposing forces driving inflation. Going forward, monetary policy decisions will need to weigh the relative importance of these two factors, among others, in determining the appropriate interest rate path. In doing so, it would be helpful to gauge the potential magnitude and timing of the impact of exchange rate depreciation on imported and overall consumer price inflation.

3. Recent research found limited evidence of exchange rate pass-through for Norway. For example, Holm (2014), using quarterly data between 1996Q1 and 2013Q4, found a small effect of the exchange rate on imported consumer goods prices, and that ERPT seems to be non-linear: substantial changes in the krone exchange rate tend to have more pronounced effects than small variations. The study did not find strong evidence that pass-through is asymmetric between appreciation and depreciation episodes.

4. We estimate the degree of ERPT for Norway in a Vector Auto-Regression (VAR) framework. Exchange rate movements are assumed to affect consumer prices primarily through two channels: (i) a direct effect on the prices for imported consumer goods—which account for about 30 percent of the consumer price index in Norway; and (ii) an indirect effect via prices for imported intermediate goods, which in turn influence prices for domestically produced goods and services by increasing the costs of imported inputs. Thus, the model bears a resemblance to that in An and Wang (2011) and the related strand of literature on the “distribution chain of pricing.” In addition to the main variables—the nominal effective exchange rate, imported consumer prices, producer prices, and consumer prices, the model also includes an index of commodity prices, a short-term interest rate, and a measure of aggregate demand (i.e., industrial production) to allow commodity price shocks, monetary policy, and macroeconomic conditions to influence the pass-through relationship.2 The VAR is estimated using monthly data over January 2000–March 2015, and a Cholesky decomposition of the variance-covariance matrix is used to identify the structural shocks.3

6. There is also evidence that pass-through has declined over time. Based on rolling regressions using overlapping samples of 6-year length, pass-through to consumer prices is estimated to be on a declining trend since the early 2000s. For example, the 3-month cumulative pass-through based on data from the first half of the 2000s averages about 15 percent, compared to 9 percent average for the most recent period. This is not a recent phenomenon, however. A number of studies have found empirical evidence of declining pass-through in both industrial and developing countries during earlier periods (e.g., Campa and Goldberg, 2002; Gagnon and Ihrig, 2004).

7. Norway’s low degree of ERPT is consistent with a low inflation environment and credible monetary policy. A firm setting prices for the period ahead would be less likely to pass on exchange rate movements to consumers if it does not expect the increase in costs to be persistent–that is if inflation is low and stable and inflation expectations are well-anchored. This is Taylor’s (2000) hypothesis, which links the level of inflation to the degree of ERPT and which has enjoyed strong empirical support in cross-country analyses. Norway’s low and stable inflation environment, supported by the credible inflation targeting regime, likely contributes to limiting exchange rate pass-through, even during large depreciation episodes.

B. A Model for Forecasting Inflation

8. We build a simple model of Norwegian inflation dynamics. The goal is to have a simple framework to weigh the relative importance of recent forces driving inflation in Norway, namely the weakening growth outlook and exchange rate depreciation. The latter may have a small impact on consumer price inflation, as the analysis in the previous section shows, but its role cannot be ignored. Our model is essentially an augmented Phillips curve that explicitly incorporates supply-side factors, following the spirit of the “triangle model” (see e.g. Gordon, 2013).4 It includes a lagged term of inflation—this could capture adaptive inflation expectations, the (mainland) output gap, the real effective exchange rate (REER) gap—defined as deviation of REER from its “fundamental” or trend values, and the productivity gap—defined similarly.5

In an alternative specification, the exchange rate variable is replaced with imported price inflation and/or changes in a commodity price index. The model is used to explain either headline or core inflation (i.e. CPI excluding effects of taxes and energy).6 It is estimated using Generalized Method of Moments (GMM) on quarterly data over 1996Q1–2015Q1, with lagged inflation and the output gap instrumented using lags of the short-term interest rate.

9. The model—although simple—explains Norwegian inflation reasonably well (Table 1). Headline inflation is fairly persistent with an autoregressive coefficient of 0.47. Demand pressures exert significant effects on inflation: a one percentage point increase in the output gap raises headline inflation by over 25 basis points. A real exchange rate depreciation (relative to trend) raises inflation, but the degree of pass-through is small (about 7 percent)—consistent with findings from the previous section. And finally, a productivity acceleration helps reduce inflation (consistent with rigid wages). The baseline model explains about half of the variation in Norway’s quarterly headline inflation (column 1), and over 90 percent in core inflation (column 4). In alternative specifications, an increase in the price of imported consumer goods has similar effects as does an exchange rate depreciation (column 2), whereas a commodity price shock has little discernible impact on inflation (column 3), with Norway being an oil exporter. Any impact of the oil price on inflation would likely work through its effect on the output gap.

10. In-sample and out-of-sample forecasting performance is good (Figure 2). The one-step-ahead forecast of core inflation closely follows the actual. Forecasts of headline inflation are reasonable, although the model cannot explain several upward and downward spikes in inflation (e.g., those caused by a VAT reduction in 2001Q1 as well as electricity price changes in the first half of 2003). Focusing on core inflation to rule out price movements resulting from one-off changes in taxes or energy prices, we also examine the model’s 16-step-ahead forecast starting in 2011Q1. The central core inflation path predicted by the model is reasonably close to the actual path, with actual inflation staying inside the 95 percent confidence band in the majority of quarters.

11. The model can be used to examine forecast scenarios in the period ahead. We perform dynamic forecasts of core inflation from 2015Q2 to 2016Q4. In the baseline scenario, which features a moderate slowdown in mainland growth and a gradual rebounding of the real krone exchange rate,7 core inflation is predicted to stay rather subdued at less than the 2½ percent target during the next two years. Core inflation would be even more subdued should growth turn out to be weaker than expected.8 However, in a scenario of further and persistent exchange rate depreciation,9 core inflation would be significantly stronger and closer to the target despite limited exchange rate pass-through.

All variables enter the model as year-on-year growth rates, except for the short-term interest rate. Four lags are included.

The triangle model refers to a Phillips Curve that depends on three elements—inertia (e.g., adaptive expectations), demand (e.g., unemployment or output gap), and supply (e.g., food and energy prices, exchange rate, productivity growth). Supply shock variables appear explicitly in the inflation equation rather than being forced into the error term as in the New Keynesian Phillips Curve approach.

The “gap” variables are measured as deviations from an HP trend.

We are grateful to the Norges Bank for providing historical series for CPI-ATE.

For the dynamic forecast, we use the WEO projection of the output gap, and project the REER and productivity gaps using an ARIMA model.

In this scenario, the (negative) output gap is wider by 0.75 percentage points relative to baseline in each quarter during the forecasting period.

This scenario assumes that the real exchange rate depreciates by an additional 5 percent in each quarter relative to baseline. 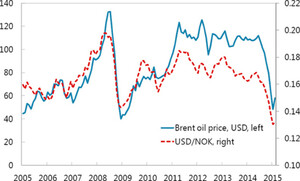 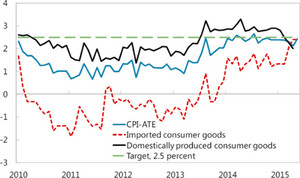 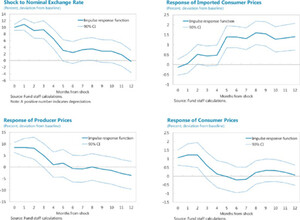 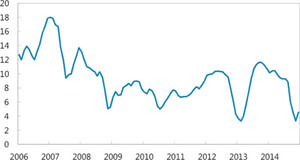 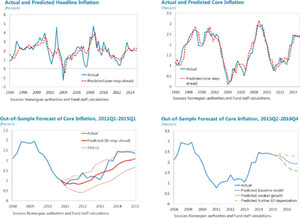