Improving Public Infrastructure in the Philippines1

1. Boosting investment is a major structural challenge in the Philippines. At 21.8 percent of GDP in 2014, the investment rate in the Philippines is well below regional peers, as reflected in its low capital stock and infrastructure quality. The main impediments to private investment are inadequate infrastructure, a weak investment climate, and restrictions on foreign direct investment. Regarding public investment, the low revenue base and fiscal consolidation have prevented sufficient resource allocation in the past, while weak implementation capacity has led to budget under-execution more recently, especially in 2013–14. Raising investment, particularly in infrastructure, would allow the country to reap the dividends of its young and growing population.

2. To address this issue, the government plans to increase infrastructure spending from 3 percent of GDP in 2014 to 5 percent by 2016, while also facilitating Public Private Partnership (PPP) projects. Immediate priorities include implementation of the transport system in Manila (Manila Dream Plan approved by NEDA) and improvements in airports, road connectivity, and seaports across the country. Although there is a consensus that public infrastructure needs to be improved, the macroeconomic effects of doing so may differ depending on how this is done.

7. With a low capital stock and a fast growing young population, addressing the large infrastructure gap is needed to raise potential growth and reduce poverty and external imbalances. This chapter shows that improving public infrastructure can generate sustained output growth, and improving public investment efficiency is helpful in addition to a spending increase. Given the need to ensure debt sustainability amid the large spending needs in other priority spending areas for inclusive growth, continued efforts mobilize revenue will be critical, including by enacting measures to offset any revenue eroding policy changes and preferably through a comprehensive tax reform that focuses on broadening the tax base.

B. The State of Public Infrastructure in the Philippines

Quantity and Quality of Public Infrastructure

9. Survey-based indicators also paint an unfavorable picture for the current state of public infrastructure in the Philippines. The World Economic Forum’s global competitiveness report surveys business leaders’ impressions on a wide-range of topics in the business environment on a 1-7 point scale. Regarding key infrastructure services, it places the Philippines as the second lowest among the ASEAN countries and substantially lower than the ASEAN average.

10. The Philippines has made steady progress in governance and fiscal transparency. Its relative ranking in the World Bank’s World Governance Indicators has improved every year since 2010. The improvement has been especially sharp in the control of corruption. This reflects the high priority that the current administration has given to governance reform. Regarding fiscal transparency, IMF (2015b) assessed the Philippines’ Public Financial Management (PFM) practices against the draft Fiscal Transparency Code covering the three pillars of fiscal reporting, fiscal forecasting, and fiscal analysis and management. It acknowledged the authorities’ reform efforts and reached broadly favorable conclusions. The progress in recent years has resulted in significant improvements in the investment climate, and together with increased fiscal space, translated into higher private sector confidence.

11. However, there is still much room for improvement in public investment efficiency.

12. This section simulates the macroeconomic effects of public infrastructure improvement using the GIMF model. The GIMF is a multi-region general equilibrium macroeconomic model developed by the IMF’s Research Department. It has optimizing firms and households, frictions in the form of sticky prices and wages and real adjustment costs, a financial accelerator mechanism, monetary policy that follows inflation forecast targeting, and fiscal policy that ensures debt sustainability in the long run. The model includes a detailed description of fiscal policy that allows for the choice of seven different fiscal policy instruments for fiscal adjustment, encompassing both revenue and expenditure measures. Moreover, the finite lifetime of households, some of whom are liquidity constrained, generates strong macroeconomic responses to a fiscal shock. Kumhof and others (2010) and Anderson and others (2013) elaborate further on the theoretical structure and main simulation properties of the GIMF model.

13. This chapter departs from the standard calibration by assuming that not all public investment spending contributes to the formation of public capital, but is partly wasted in the form of public consumption.3 It is assumed in the baseline that 40 percent of public investment does not lead to public capital formation but is instead wasted.4 Reflecting this assumption, steady state government investment is assumed to be 2 percent of GDP although officially it has been 3.3 percent of GDP on average since 2011 at the general government level.

20. The current account exhibits a sustained deterioration, mostly because of higher imports. Exports also decline initially due to the initial real appreciation associated with the policy interest rate increase. Subsequently, exports increase as investment stimulates production and the initial real appreciation is reversed in line with the reversal of initial monetary tightening, which partially offsets the reduction of the current account. The size of the current account deficit increase is roughly proportional to the output increase and reaches 0.9–1.4 percent of GDP in two years.

A potential downside to the tax-financed scenario is the increased cost of tax collection and the risk of tax evasion. We have abstracted from these in this chapter.

This specification follows a similar exercise in IMF (2014).

This is broadly in line with the Philippines’ PIE-X and PIMI scores relative to best performers.

Borrowing costs are affected by various factors, including both global and local ones. Chapter 1 estimates determinants of 10-year government bond yields in the Philippines while controlling for a comprehensive list of variables, and finds the marginal effect of a unit increase in the debt-to-GDP ratio to be 5-6 basis points. This chapter assumes that there have been structural changes in the Philippines’ fiscal management as reflected in credit rating upgrades in recent years, and adopted a borrowing cost response somewhat lower. If the estimate from chapter 1 was used, output from the deficit-financed scenario would be overtaken by the tax-financed scenario earlier. Regarding international evidence, Baldacci and Kumar (2010), and the review therein, estimate the response of the borrowing cost to range from 3–7 basis points per unit increase in the debt-to-GDP ratio. 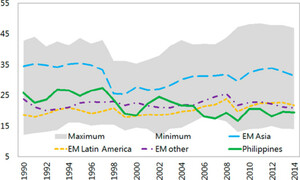 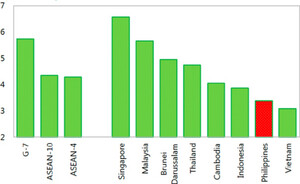 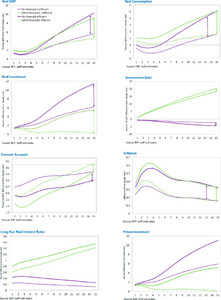