The Philippines has been undergoing a period of financial deepening since the mid-2000s (see Chapter 2), with significant debt accumulation concentrated in nonfinancial firms. This benign financial cycle could reverse once the U.S. Federal Reserve starts raising policy rates, given the close link between domestic and global financial conditions (see Chapter 1). This chapter analyzes nonfinancial sector firm-level data in search of signs of vulnerability and finds that: (i) the distribution of leverage and debt-at-risk have remained stable; (ii) most firms seem resilient to large shocks with risks concentrated in a few sub-sectors; (iii) the real estate sector seems relatively more vulnerable and should be closely monitored, especially given its involvement in unregulated shadow banking activities. Data gaps constrain this analysis and should continue to be addressed.

A. Introduction: Does Indebtedness Lead to Vulnerabilities?

1. Debt has increased rapidly in the Philippines, driven by nonfinancial corporate (NFC) borrowing during the last several years of easy financial conditions, but total debt-to-GDP is still low when compared to other Asian countries and EMEs.

2. Assessing the vulnerability of NFC firms to a possible tightening in financial conditions is an important component of macrofinancial surveillance. The Philippine corporate sector is highly concentrated, dominated by several large conglomerates spanning banking, real estate, and other major sectors of the economy. Thus, an adverse shock affecting a few highly indebted firms, such as a sudden increase in interest rates, may be transmitted to their holding conglomerate and, through it, to the rest of the economy posing a risk to macroeconomic or financial stability. This section examines firm-level data to assess the NFC sector’s vulnerability to various shocks.

3. Firm-level data are needed to uncover possible pockets of vulnerability that could otherwise be hidden in aggregate data. This chapter uses Orbis compiled data on thousands of Philippine firms spanning multiple years2 and studies both current measures of balance sheet health, as well as the sensitivity of those measures to large shocks to earnings, interest rates, and exchange rates.

4. The analysis shows that most firms currently have strong balance sheets and appear broadly resilient to shocks. In particular, leverage has not increased significantly since 2007 and debt-servicing capacity is still high. Firms seem broadly resilient, with the most important vulnerabilities associated with interest rate shocks rather than exchange rate shocks.

5. However, some sectors appear more vulnerable, particularly real estate. A few key real estate developers have increased their leverage substantially, while expanding shadow-banking activities through their acceptance of advances from households, as described further below. The BSP is closely monitoring the banking sector’s exposure to the real estate developers.

6. The analysis in this chapter is constrained by important data gaps. First, spillovers within each conglomerate cannot be analyzed in the absence of information on earnings distributions and within-group lending. Second, detailed firm-level data on foreign currency denominated debt and foreign sales are unavailable. Thus, exposures to FX risk are imperfectly measured and based on aggregate information, either at the sector level in the case of foreign sales, or economy-wide for foreign currency denominated debt.

7. The chapter is organized as follows. Section B presents current measures of balance sheet health. Section C conducts a stress testing exercise. Section D explains why the real estate sector should continue to be monitored closely in light of the findings presented in earlier sections.

B. Despite Rising Debt, Leverage and Debt-at-Risk Have Remained Stable

8. The literature assesses the health of balance sheets in the NFC sector by using median or average leverage and debt-at-risk.3 Leverage is measured through debt-to-equity or net debt-to-earnings ratios, usually computing a cross-sectional average or median. Debt-at-risk, on the other hand, measures total indebtedness of firms with relatively low debt servicing capacity, with debt servicing capacity measured by the ratio of earnings before interest and taxes (EBIT)-to-interest payments (the so called “Interest Coverage Ratio” or ICR).4 The IMF’s Corporate Stress-testing Exercise considers debt to be at risk when the ICR is below 1.5.5

9. This chapter, in addition to evaluating debt-at-risk, focuses on changes in the cross-firm distribution of leverage through time, which is preferable to looking only at changes in averages or medians. Cross-sectional (weighted) averages or medians of firm leverage are sensitive to extreme outliers (in the case of averages) and to the way firms with negative equity or EBIT are treated (both averages and medians).

10. Leverage for nonfinancial firms does not appear to have increased over time. Most firms have had reasonable debt-to-equity and debt-to-EBIT ratios. There are, however, two possible sources of concern: (i) the frequency of firms with negative equity has increased slowly over time, although negative EBIT is now less common; and (ii) high levels of leverage have become slightly more common. However, these may reflect the widening of Orbis’ coverage over time.

11. Smaller firms, although more leveraged, should not undermine the stability of the sector given their low share on total debt. Comparing “Large firms,” defined as those in the top 25th percentile of total assets and the remainder, “Small firms,” we find that both negative equity and very high levels of leverage are slightly more common among small firms. But small firms account for only 3.4 percent of total debt and thus are not systemically important.

12. While FX exposure appears low, firm-level data for both FX debt shares and natural hedges are not available. Regarding FX debt shares, an estimate based on aggregate NFC data is applied to all firms. This presumably biases the estimated FX exposures away from large firms, and towards smaller firms without access to international debt markets. Natural hedges are proxied by the share of foreign sales available from Worldscope, and imputed at the sector-level (see Appendix 1 for details).

13. The share of debt for firms with low ability to cover interest payments, or debt-at-risk to total debt, has been declining since 2008. Debt-at-risk corresponds to total debt owed by firms with an ICR of less than 1.5. Since 2012, small firms have almost no debt-at-risk, reflecting primarily their low level of total indebtedness.

16. Following closely the Corporate Stress-testing Toolkit methodology, this section analyzes the sensitivity of NFC firms’ balance sheets to earnings, interest rates and exchange rate shocks.6 In particular, the analysis considers how debt-at-risk is affected by shocks through the impact on EBIT and debt (see Appendix 1).

17. Different combinations of shocks and assumptions on natural hedges are explored in three scenarios. Scenario 1 uses the shocks considered in the Corporate Stress-testing Toolkit, which are a 20 percent fall in earnings, a 30 percent increase in interest rate and 30 percent exchange rate depreciation, while using an economy-wide level of natural hedge for all firms.7 Scenario 2 considers the same shocks but imputes natural hedges at the sector level using Worldscope data, as described in Appendix 1. Scenario 3 considers the same natural hedge and earnings shock than in scenario 2, but looks at a stronger interest rate shock (an increase of 50 percent), and a smaller exchange rate shock (a depreciation of 10 percent), which are informed by the results of Chapter 1 and the mild peso depreciation during the “taper tantrum” episode.

19. Debt-at-risk is concentrated in a few sectors, most importantly “Other services,” which includes real estate. This sector has the largest debt-at-risk across all scenarios. The large jump in debt-at-risk from Scenario 1 to 2, or from using economy-wide to sector-wide natural hedges, is explained by the consequent reduction in natural hedges applied to “Other services” from 35 percent to 17 percent. For many firms in that sector, even a natural hedge of 17 percent might be an overestimate, as suggested in ¶22.

20. The stress-testing exercise is subject to key caveats related to data gaps that should be addressed before making a definitive assessment of the resilience of NFC balance sheets to shocks (see ¶6).

D. Firm-Level Developments in the Real Estate Sector Should be Monitored Closely

22. In fact, vulnerabilities in the real estate sector are probably even larger than the stress tests indicate due to favorable assumptions regarding FX exposures. First, it was assumed above that all firms in “Other services” have the same share of foreign sales, including real estate developers, which likely overstates their actual natural hedge. Second, it was assumed that all firms have the same economy-wide share of FX debt because disaggregated data were unavailable. Real estate developers may have higher FX debt shares than the average firm, leading to an underestimation of balance sheet effects stemming from exchange rate shocks.

23. Another concern for macrofinancial surveillance is the rapidly increasing leverage of some real estate developers. Most developers saw increases in equity commensurate with rising debt but some key players have increased their leverage more aggressively. Leverage ratios in the Philippine real estate sector are nevertheless still considerably below those observed in the U.S. commercial real estate sector in the runup to the global financial crisis, which rose from 1.9 in 2000 to 3.1 in 2008 (Mckinsey 2010, Exhibit 15).

24. At the same time, some highly leveraged real estate developers are increasingly involved in shadow banking activities through their acceptance of advances from households. Buyers that cannot qualify for bank loans are increasingly encouraged to make advances, carrying high interest rates, for properties still under development. These advances are trade receivables from the perspective of real estate developers, who keep ownership of the property until fully paid. Thus, developers are in a sense extending fully collatereralized loans that are exposed to strategic default in a context of expected house price declines or sharp interest rate increases. Despite the rapid increase in non-bank financing, such activities appear still modest, particularly when taking a cross-country perspective.

25. Thus, the real estate sector should be monitored closely, with an emphasis on the few developers who expanded significantly their shadow-banking activities and whose leverage increased the most. While the BSP has recently conducted stress tests on banks’ exposure to real estate, which contributed to a slowdown of credit growth to that sector, it lacks the regulatory reach to fully monitor these developments, particularly shadow banking activities and intra-group borrowing.

Orbis has data that requires reconciliation (see details in Appendix 1).

See Adrian and Shin (2008, 2009, and 2010) and Kalemli-Ozcan and others (2012) for extensive discussions; this chapter follows IMF, Global Financial Stability Report, April 2014, Chapter 1, closely. Lindner and Eun Jung (2014) analyze India’s nonfinancial firms in detail whereas Chivakul and Lam (2015) do the same for China. The IMF’s Asia and Pacific Regional Economic Outlook of April 2014 and April 2015 show summary statistics for nonfinancial firms across the region based on the same sources used here, and thus provide a good point of comparison.

See IMF, 2015 Spillover Report, Chapter 3, “Spillovers from U.S. Dollar Appreciation.” An ICR threshold of 1.5 does not have any particular theoretical justification, although it is often used in the literature.

The interest rate shock is in fact a shock to interest payments or equivalently a shock to the average coupon rate. 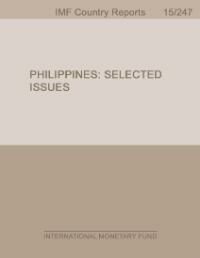 (In percentage points of GDP)

Distribution of Natural Hedge and Debt by Sector

(In percent of total debt)

Debt-at-Risk Across Different Shocks by Sector

(In billions of U.S. dollar)

(percent of total, based on Individual issuance data)

Leverage in the Real Estate Sector 1/ 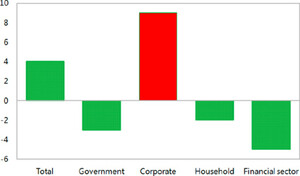 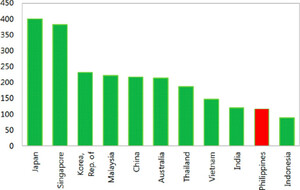 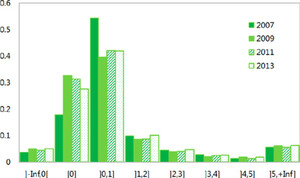 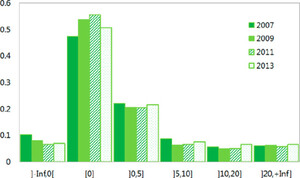 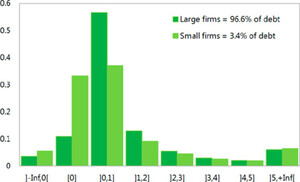 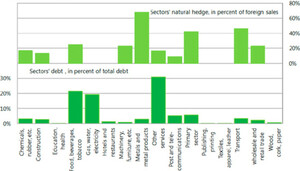 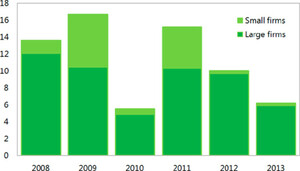 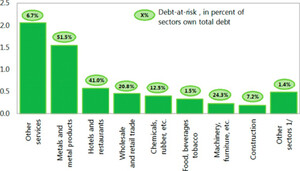 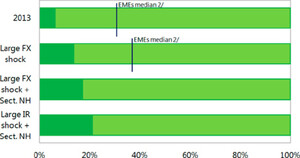 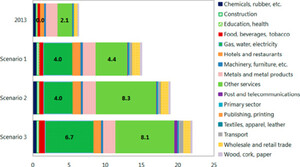 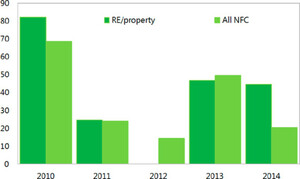 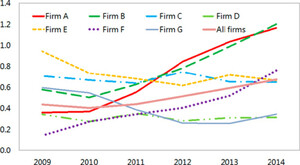 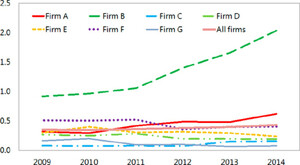