1. The interaction between real and financial variables is crucial to assess the economy’s cyclical position. Previous studies have found strong linkages between real and financial cycles. For example, Claessens and others (2011) find that recessions associated with financial disruption episodes, notably house price busts, tend to be longer and deeper than other recessions. Conversely, recoveries associated with rapid growth in credit and house prices tend to be stronger. These findings emphasize the importance of developments in credit and housing markets for the real economy.

2. The linkages between real and financial cycles can be stronger in the presence of credit booms. Dell’Ariccia and others (2012) note that credit booms buttress investment and consumption and can contribute to long-term financial deepening. However, they often end in costly balance sheet dislocations, and, more often than not, in devastating financial crises whose cost can exceed the benefits associated with the boom. Not all booms are bad. While about a third of boom cases end up in financial crises, others do not lead to busts but are followed by extended periods of below-trend economic growth. Yet many result in permanent financial deepening which, in turn benefit long-term economic growth.

3. What does the interaction between real and financial variables imply for the current cyclical position in the Philippines? This is an important question given the acceleration in real GDP and credit growth since 2010 against the backdrop of an expansionary global financial cycle (see chapter 1). In particular, real GDP growth rose from 4.5 percent in 2000–09 to 6.2 percent in 2010–14, raising the question of whether this higher growth was due to an increase in potential growth or to cyclical factors. At the same time, credit growth accelerated from 7 percent in 2001–09 to 16.1 percent in 2010–14, giving rise to questions of whether the economy was experiencing a credit boom which, in turn was contributing to the increase in economic growth.

4. Analysis of the real and financial cycles indicates that the current cyclical position of the Philippine economy is broadly neutral. Alternative measures of the business cycle—univariate and multivariate filters and a production function approach—suggest that the output gap is near zero in 2015. Similarly, different measures of the financial cycle—deviations from trend of real credit per capita or credit-to-GDP and growth of credit-to-GDP—show that the credit gap is also near zero in 2015, with credit growth remaining below typical metrics of credit booms since the late 1990s. The interaction between real and financial cycles suggests that the cyclical position of the Philippine economy is broadly neutral in 2015, with the output gap near zero even if measures of the real cycle are augmented with financial variables.

6. Univariate filters indicate that most of the recent increase in growth has been due to higher potential growth, with the output gap near zero in 2015–16. The Hodrick-Prescott filter, the Baxter and King band-pass filter, and the Christiano and Fitzgerald symmetric band-pass filter were used to estimate potential output and the output gap in the Philippines. Actual data up to 2014 and staff projections for 2015–20 were used in the estimation. All three filters yield similar results, with potential growth increasing from about 5 percent in 2000–09 to 6½ percent in 2015–16 and output gap closing in 2015.

8. A production function approach also attributes most of the recent increase in growth to higher potential growth, with the output gap closing in 2015. This approach uses three factors of production: physical capital, employment, and human capital, with TFP measured as the Solow residual. Physical capital is estimated using the perpetual inventory method, while human capital is estimated interpolating the measure of educational attainment for population aged 15 and over from Barro and Lee (2013). Employment is derived from the product of working age population, labor participation rate, and employment rate (one minus the unemployment rate). In order to estimate potential output, data for TFP, labor participation, and unemployment are smoothed using the Hodrick and Prescott Filter. Physical capital, human capital, and working age population are not smoothed. The results suggest that most of the recent pickup in growth in the Philippines is explained by an increase in potential growth from below 5 percent in 2000–09 to about 6¼ percent in 2015–16. The rise in potential growth is due mainly to faster TFP growth and, to a lesser extent, to faster physical capital growth. The production function approach also shows an output gap near zero in 2015–16.

9. All estimates discussed above suggest that the pickup in growth in the Philippines since 2010 has been due to higher potential growth, with the output gap near zero in 2015–16. As the production function approach indicates, the acceleration in potential GDP growth has been due to higher growth of TFP and physical capital, with the contribution from labor and human capital remaining broadly stable since the late 1990s. At the same time, the pickup in growth since 2010 has not resulted in higher inflation or in a rapidly declining unemployment rate, thus leading the multivariate filter to associate the increase in growth to higher potential growth, with generally low output gaps since 2010.

10. Bank credit growth in the Philippines has accelerated since 2010, especially in 2014. After a long period of deleveraging following the Asian financial crisis, growth of bank loans more than doubled from 5.9 percent in 2002–09 to 15.2 percent in 2010–13 and 19.9 percent in 2014. The increase in loan growth was particularly large for services and industry. Within services, retail and wholesale trade, real estate, and financial intermediation saw the largest increases in loan growth. Within industry, manufacturing, utilities, and construction saw the largest increases. The pickup in credit growth since 2010, combined with a larger share of credit allocated to potentially speculative sectors such as real estate and construction, have raised the questions of whether the Philippines has experienced a credit boom, whether the composition of credit is a threat to financial stability, and whether the credit cycle has contributed to real sector overheating.

11. Deviations of real credit per capita from trend indicate that the credit gap is slightly positive in 2015, with no signs of credit booms since the late 1990s. The approach of Mendoza and Terrones (2008) is used, which looks at deviations of real credit per capita from its Hodrick-Prescott trend, identifying credit booms when the deviation from trend is larger than 1.75 times its standard deviation. Actual data up to 2014 and staff’s projections for 2015–16 were used. This approach shows a slightly positive credit gap in 2014–16, but well below the credit boom thresholds. Moreover, this approach identifies a credit boom during 1997–98, but none afterwards regardless of the length of the sample used.

13. Changes in credit-to-GDP indicate there have been no credit booms since the late 1990s, but 2014 was a borderline case. Chapter 3 of the IMF’s Global Financial Stability Report of September 2011 finds that increases in the credit-to-GDP ratio above 3 percent, year-on-year, could serve as early warning of credit booms, with increases above 5 percent indicating more advanced and severe credit booms. For the Philippines, the changes in credit-to-GDP were above the credit boom thresholds in 1993 and 1995–97, but have been below these thresholds since (Figure 8). However, 2014 was a borderline, when the change in credit to GDP was 3.1 percent, just above the 3 percent threshold. In line with current trends, staff expects credit growth to moderate in 2015–16, with credit-to-GDP increasing by 2 percentage points per year, below the credit boom threshold.

15. Financial variables contain useful information concerning the business cycle position. Expansions that coincide with rapid credit and asset price growth tend to be stronger, while recessions coinciding with credit and asset price busts tend to be longer and deeper. Borio and others (2013) argue that incorporating information about the financial cycle is important to improve measures of potential output and output gaps. Identifying potential output with non-inflationary output is too restrictive as output may be on an unsustainable path even if inflation is low and stable whenever financial imbalances are building up. Within a simple and transparent framework, they show that including information about the financial cycle can yield measures of potential output and output gaps that are not only estimated more accurately, but also more robust in real time.

16. The approach of Borio and others (2013) is used to integrate financial variables into a broader measure of the output gap. In particular, Borio and others (2013) expand a standard Hodrick-Prescott filter with data on real credit growth, and changes in real house and stock prices. This chapter uses this same set of financial variables for the case of the Philippines, but as official data on house prices does not exist, it relies upon private sector measures of condominium and land prices for the businesses districts of Metro Manila. The estimation results show that residential and land prices are not statistically significant, but growth in real stock prices is always significant. Credit growth is significant when considered alone, but it is loses its significance when real stock prices are added to the specification. Thus, two specifications were chosen, one in which only real stock prices are added to the Hodrick-Prescott filter, and another in which both real credit and real stock prices are added.

17. The results indicate that the Philippine output gap in 2015–16 is slightly larger when financial variables are included, consistent with a slightly positive credit gap. As with the approaches above, both specifications suggest that potential growth has increased from just below 5 percent in 2000–09 to just above 6 percent in 2015-16. This increase in potential growth is only slightly smaller than the one found using approaches that exclude financial variables, suggesting that most of the gains in potential growth seen in the Philippines have not been due to an overly expansionary financial cycle, but rather to other structural factors. The credit neutral approach also suggests that the output gap is slightly positive in 2015–16, consistent with a slightly positive credit/asset price gap. However, even in this case, the output gap is very small and there is significant uncertainty around these estimates. Thus, the current cyclical position in the Philippine economy seems to be broadly neutral, with the output gap near zero even if standard estimates of the output gap are augmented with financial variables.

Prepared by Jaime Guajardo and Rui Mano (both APD). 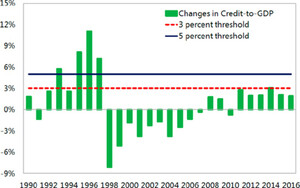 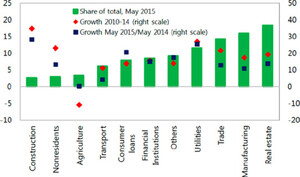