Growth in Guinea-Bissau has been disappointing and highly volatile. With exports and commercial bank lending being dominated by the cashew nut sector, Guinea-Bissau is highly vulnerable to exogenous shocks such as fluctuations in international cashew prices. The majority of the country’s population is employed in low-productivity agriculture focused on cashew production which has superseded the production of rice. To reduce the economy’s exposure to shocks, policies should focus on exploring “quick-wins” to economic diversification, such as reform or closure of the FUNPI, in the short term. To further diversify the economy in the medium to long term, policies could focus on easing main constraints in key areas such as infrastructure, education and the business climate. Given the importance of the primary sector for Guinea-Bissau and the country’s biodiversity, economic policies could also target specific activities such as rice cultivation and mining, as envisaged under the government’s Strategic Plan.

A. Growth, Volatility, and Productivity

1. Growth in Guinea-Bissau has been weak and highly volatile over the last decades (Figure 1). From 1995 to 2014, real GDP has grown by an average of 2.3 percent per year, leaving the country’s real GDP per capita at a lower level in 2014 than two decades ago. In addition, Guinea-Bissau’s growth performance has been characterized by large volatility: Figure 1 highlights most notably the catastrophic effect of the civil war (1998-1999) but also other episodes of instability, such as through attempted or actual military coups (see Section 1 on the cost of fragility). The country remains vulnerable to exogenous shocks, such as fluctuations of international cashew prices, which added to the negative effect on growth from the 2012 coup.

2. Low physical and human capital accumulation and total factor productivity have posed major impediments to growth (Figure 2). In Figure 2, Guinea-Bissau’s real growth rate is decomposed into the contributions capital, labor, education and total factor productivity. The factor ‘gaps’ from this simple exercise suggest that while improvements to education and labor force growth have on average contributed positively to growth, slow capital growth and total factor productivity have posed significant impediment to economic activity, as investment in percent of GDP has been less than half of that observed in other WAEMU countries. Guinea-Bissau performs poorly in assessments of its business environment, with access to electricity, starting a business, and contract enforcement posing particular challenges. While measures of basic education, such the literacy rate, are comparable to those of other countries in the region, they are still low in absolute terms, and gender gap in literacy rates are much larger compared to Sub-Saharan and Asian countries which have achieved high growth rates in the past decades.

3. Policies to stimulate economic growth are required on multiple fronts. Significant investments to close the country’s capital and infrastructure gap will be needed to increase economic growth in the medium-term. Policies that target access and quality and inclusiveness of education could increase the contribution of human capital to growth. Reforms in public financial management (PFM) and governance would improve the efficiency of public and private investment, and improvements to the business environment, such as through stronger contract enforcement and more efficient and reliable electricity provision will be essential to raise productivity. The government’s emergency program to restore electricity through hiring a private company to install diesel-run generators has already shown a positive impact, but significant investments, as outlined in the government’s Strategic Plan, and a restructuring of EAGB, the electricity and water company, will be key to improve the energy situation in the medium term.

B. Recent Trends in the Structure of Output and Exports

4. There has been relatively little evidence of structural change in Guinea-Bissau over time, in sharp contrast to fast growing Sub-Saharan African economies. Figure 3 highlights that structural transformation of Guinea-Bissau’s economy has been limited, if not backward oriented, with the agricultural sector growing more dominant, and the contribution of manufacturing, construction as well as wholesale and retail sectors having even declined slightly in the past two decades. The share of the tertiary sector, however, has increased somewhat since the mid-1990s. The rise of the share of the agricultural sector is in contrast to the trend observed for the WAEMU, where the share has remained stable, and even more so compared to the benchmark group of fast growing Sub-Saharan African countries in which the agricultural sector has on average become less dominant since 2000.

6. Relative export quality has generally declined and exports are highly concentrated on exports of relatively low quality (Figure 5). While the quality of Bissau-Guinean cashew nuts is high, the majority of nuts are exported unprocessed, with no relative improvements in export quality over the last decade. The last chart in Figure 5 plots the export quality, as measured by the export’s unit value adjusted for differences in production cost, distance to the trading partner, and the countries development (Box 1), for the largest sectors (2-digit SITC) in each WAEMU country. It suggest that, while some countries have succeeded in achieving a high product quality in at least one of their top export sectors, export concentration in many countries remains high in sectors of relatively low quality. This is particular the case in Guinea-Bissau, where exports are concentrated in products of relatively low quality.

7. Increasing diversification and quality upgrading could yield significant growth and stability gains. Based on estimated obtained in IMF (2014a) for low-income countries, increasing export diversification in Guinea-Bissau to levels observed in the WAEMU over the period 2001 to 2010 could have resulted in an increase in the average real growth rate for Guinea-Bissau by about 1 percentage points. In a thought-experiment which raises diversification in Guinea-Bissau to that of fast growing Sub-Saharan African or Asian countries, these gains are estimated at about 1½ percentage points.

Export product diversification is captured by the Theil index which can be decomposed into a “between” and a “within” sub-index:

Export quality is measured by the export’s unit value adjusted for differences in production costs, relative distance to the trade partner, and the development of a country through the following relationship:

in which the sub-scripts m, x, and t denote importer, exporter and time period respectively.

8. To support diversification, policies should focus on addressing weaknesses that hinder entry into new lines of economic activity (Box 2; IMF 2014a). Weaknesses abound in Guinea-Bissau in particular in terms of the provision of infrastructure, the regulatory and institutional environment, the accumulation of human capital, and the provision of finance. Evidence from crosscountry comparisons and individual case studies suggests that policies targeting these areas can be successful in fostering structural transformation and diversification, while the evidence is more mixed concerning the success of industry-focused and narrowly targeted measures (Box 2). However, given its dominance in terms of contributions to GDP and to employment and the potential for productivity and quality improvements, the agricultural sector, and in particular the cashew nut sector, warrants special attention in Guinea-Bissau. The following paragraphs therefore focus on the cashew sector.

While there is no silver bullet of reform to foster structural transformation, the following general policies have emerged from successful country case studies and cross-country evidence (IMF 2014a, IMF 2013). Several of these policies may be addressed at both the national and regional levels:

“Quick-Wins” in the agricultural sector: Reforming the FUNPI

9. Background: The agribusiness development fund has failed to achieve its objectives (IMF, 2014c). The FUNPI (Fundo para a Promoção da Industrialização dos Produtos Agrícolas) was created in 2011 to promote agribusiness by easing financing constraints in a time when cashew exports from Guinea-Bissau were selling at historically high levels. It has been financed by surcharges of about US$100 per ton of exports of raw cashew nuts that were additional to export taxes. However, the FUNPI faced major implementation problems:

10. The authorities committed to an international audit of the FUNPI, the result from which would help restructure or close the Fund. The results from this audit, to be completed by September 2015 with the help of the World Bank, will lay the foundation for a new strategy to promote the cashew nut sector and to reduce poverty in rural areas. In particular, the elimination of the FUNPI tax would increase incomes for poor farmers and reduce poverty and extreme poverty by 2 and 3 percentage points, respectively. In combination with improved customs controls, it would reduce smuggling, thus boosting the government’s revenue base. Development partners, such as the World Bank, are also willing to support the cashew sector through lending, guarantee funds and technical assistance.

11. While the expansion of other sectors, such as rice, mining, and tourism will be essential, developing a cashew processing industry can foster employment and structural transformation. According to recent World Bank estimates, approximately one job would be created for every three tons of processed cashew nuts, mainly in rural areas (World Bank, 2014). Expanding the cashew sector into processing would also result in less dependence on India as an export partner, and thus reduce the economy’s vulnerability to shocks by diversifying export destinations. Given the current infrastructure gap, cashew processing could minimize pressure on roads by lowering transport volumes when exporting cashew kernel. It would imply higher value-added, thus stimulating growth and supporting the balance of payments.

10. Developing a cashew sector will require overcoming several challenges in financing, the business environment and infrastructure. The banking sector currently prefers to finance exports of raw cashew nuts rather than processed ones. It also sees lending to the private sector in general as risky as obtaining information on credit worthiness is very difficult and contract enforcement relatively weak (see Section 2). Stronger contract enforcement, for example via the opportunity to faster recovery of collateral, could go a long way in stimulating lending and lowering borrowing costs. Political stability risks and challenging business environment pose obstacles to foreign investment, making the security sector reform not only essential from an overall stability perspective but also for the financing of economic activity. Entrepreneurial capacity will need to be strengthened with a view of implementing best practices in the processing of cashew in the medium to long term (e.g. importing cashew nuts to employ cashew processing facilities in off-seasons as well). Large investments in roads will be necessary to ease transportation as there is currently hardly road access during the rainy season. Particular focus on attracting foreign investment to medium-size processing plants and establishing community-level processing facilities would help promote inclusiveness of the growth outcomes from these activities.

11. Short and medium-term policies to diversify Guinea-Bissau’s economy could help the country break with a history of low and volatile growth. With exports and commercial bank lending being dominated by the cashew nut sector, Guinea-Bissau is highly exposed to exogenous shocks such as fluctuations in international cashew prices. In the short term, to reduce the economies exposure to shocks, policies should focus on exploring “quick-wins” to economic diversification, such as reform or closure of the FUNPI. To further diversify the economy in the medium to long term, policies could focus on easing main constraints in key areas such as infrastructure, education and the business climate. Given the importance of the primary sector for Guinea-Bissau and the country’s biodiversity, economic policies could also target specific activities such as rice cultivation and mining, as envisaged under the government’s Strategic Plan.

Prepared by Monique Newiak. Part C of this section C heavily draws on recommendations in World Bank (2014) and IMF (2014a).

This section has heavily benefited from the analysis in World Bank (2014). 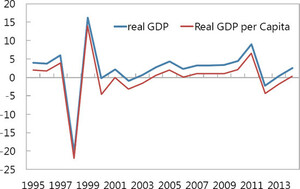 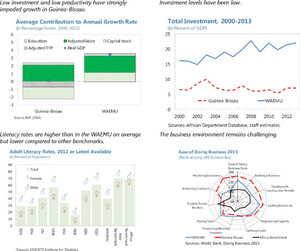 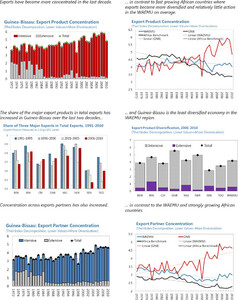 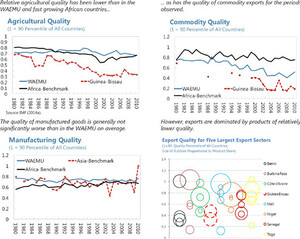