Guinea-Bissau’s financial sector remains shallow, faces major challenges, and access to financial services is low. Most indicators of financial soundness point to vulnerabilities in Guinea-Bissau’s financial system, financial depth appears to be below the level implied by the country’s characteristics, and access to financial services is limited. Commercial banks are on average less profitable and less liquid, face higher non-performing loans and are less compliant to key prudential ratios than banks in other WAEMU countries. While financial intermediation has picked up recently, credit to the private sector remains lower than implied by the country’s fundamentals. Access to financial services in Guinea-Bissau is low and the banking sector only marginally contributes to firms’ investment programs. This note reviews the state of financial stability and inclusiveness and argues that: (i) financial stability issues need to be addressed at the national and regional levels, (ii) social spending and infrastructure investments will be essential to deepen the financial market, and (iii) while the use of mobile payment services could make financial services more accessible to a wider population in the short-term, stronger financial inclusion in the medium term will require major improvements in the business environment and financial literacy.

1. Financial stability indicators point to a vulnerable banking sector; concentration risk poses the main problem (Figure 1). As in other WAEMU countries, the financial sector in Guinea-Bissau is dominated by the banking sector. The banking sector encompasses currently four banks whose assets represent almost 32 percent of Guinea-Bissau’s GDP. While the sector is well capitalized on average, with average solvency ratios above average WAEMU levels, there is considerable heterogeneity across banks, and most indicators of profitability and liquidity are weaker than in other WAEMU countries. Lending is concentrated in a few sectors. In particular, exposure to the cashew nut sector is very high and, as only a few companies are incorporated in Guinea-Bissau, the risk from this sector is concentrated on approximately 20 bankable agents.

2. Since international cashew nut prices started declining in 2012, and fueled by political uncertainty due to the 2012 coup, non-performing loans have increased significantly. As Guinea-Bissau’s economy is highly concentrated in cashew activity (more than a third of GDP and more than 90 percent of exports related to cashew activity), negative shocks to the sector can have significant impacts on balance sheets of commercial banks. Concentration risks related to other sectors are also high in some banks. When the price of cashew fell from almost 1400 USD/ton in 2011 to below 800 USD/ton in 2013, non-performing loans (NPLs) of the two banks with the largest exposure to the cashew sector increased to 60 and 74 percent as of September 2014. On average, the ratio of NPLs to total loans has increased from 6.5 percent at the end of December 2011 to 37.7 percent in June 2014.2 Consistently with existing regulation at the WAEMU level, provisioning has been slow. At the end of December 2014, considerable heterogeneity remained in the level of NPLs across banks (Figure 2).

3. An international best practice and market-based solution to curb NPLs and for recapitalization is underway and the government has thus succeeded in avoiding the use of scarce public funds for this purpose. Following technical assistance advice by the Fund, the government has refrained from providing public funds to the banks plagued by high levels of NPLs. Instead, the affected banks have started to seize collateral and one bank agreed with the Banking Commission on a phased increase in capital from CFA 5 billion to 20 billion. Going forward, it will be important for banks to also liquidate their seized collateral.

4. Compliance to other prudential indicators is also weak in Guinea-Bissau (Figure 2). Compliance with prudential norms remained weak in June 2014, even when compared to the modest compliance ratios in the WAEMU. Also due to the poor diversification of Guinea-Bissau’s economy, only one of the four banks complied with the single exposure limit which is already high by international standards (75 percent vs. 25 percent). Half of the banks did not comply with the minimum capital requirement of FCFA 5 billion, the capital adequacy ratio of 8 percent, the related party lending ceiling, the liquidity ratio and the transformation ratio.

5. Compliance with key prudential ratios needs to improve to safeguard financial stability (IMF 2015a). To this end, action on both the regional and national level is required. Recent capacity building efforts at the Banking Commission need to be reinforced by strengthening risk-based supervisory tools and processes. Timely provision of data by the national BCEAO branches to the supervisory authorities will be essential in this regard. A stronger corrective action framework should be put in place in order to reduce regulatory forbearance and better enforce compliance with prudential norms, including by taking timely and effective corrective measures against weak and/or noncompliant banks. The move to Basel II/III standards will take time but will be an opportunity to bring prudential rules closer to international norms. In the mean time, the regional authorities should step up the enforcement of the current rules, as well as start tightening certain rules where improvements are most pressing, for instance on concentration risk and provisioning of non-performing loans.

6. Private sector credit growth has slowed down recently, despite a substantial increase in intermediation (Figure 3). While growth of credit to the economy has been on an upward trend since 2004, it declined sharply in 2012, as a consequence of political uncertainty after the coup d’état and difficulties in the cashew sector due to the decline in the international cashew prices; credit growth turned negative in 2013 with the additional shock to cashew prices. Commercial banks perceive credit risk as very high, and consider investments into WAEMU government paper, or holding their liquidity with the BCEAO, as a safer option.

7. The ratio of private sector credit to GDP remains below the level implied by Guinea-Bissau’s fundamentals (Figure 4). Following the methodology in Al Hussainy (2011) and Barajas et al. (2013), this note derives a benchmark ratio of private sector credit to GDP based on a number of structural factors in a panel of over 120 emerging and developing countries for the period from 1986 to 2013.3 The fitted values from these regressions serve as the private sector-to-GDP benchmark. For the case of Guinea-Bissau, this benchmark level is much higher than the actual level of private credit in percent of GDP, implying that financial depth is lagging behind the level implied the country’s structural characteristics.

8. A number of policies could help Guinea-Bissau to increase private sector credit relative to the benchmark (Figure 5, Table 1). A regression of the financial gap (actual private sector credit-to-GDP minus its benchmark) on macroeconomic, institutional and policy variables helps identifying the drivers of the deviations from the benchmark for 2004-2013. Table 1 highlights the factors which help increasing private sector credit relative to the benchmark (see also IMF 2015b, inspired by Barajas et al. 2013). To assess the impact of feasible changes in the underlying factors, Figure 5 provides the implied reduction in the financial gap if, all other things equal, underlying factors were set to the level of the WAEMU country with the strongest record in each category. While causality is hard to establish in this exercise and the effects represent mostly associations, increasing trade openness, health (social) spending, FDI inflows and improved infrastructure to the top performing WAEMU country in the category could narrow the financial gap by 4½, 3, 1¾, and 1¼ percentage points, respectively.

10. The banking sector’s contribution to firms’ investment programs also appears limited (Figure 7). For the most recent year available (2006), enterprise surveys indicate that, while more than half of the firms in Guinea-Bissau possess a bank account, less than 5 percent of firms hold a loan or a line of credit, compared to less than 30 percent in most WAEMU countries. The majority of loans require high levels of collateral, and the acceptance of local assets as collateral is often problematic. Loans from banks constitute only a small fraction of firms’ investment financing, while internal funds appear to be the dominant source of financing investments. The most recent enterprise survey available confirms this picture, with the vast majority of respondents identifying access to finance as a major constraint for their businesses, in particular if they are active in manufacturing.

11. Lending rates by commercial banks remain high but in line with regional averages and relatively little variation between banks; better contract enforcement would help lower the rates (Figure 8). Average prime lending and maximum lending rates across banks in Guinea-Bissau stood at 9.5 percent and 14 percent, respectively, in December 2014, in line with the WAEMU average. However, the variation across banks in these rates has been, lower than in other WAEMU countries, likely owing to the limited number of banks in the country. Better enforcement of contracts, such as the possibility to faster recover collateral, could help lower these rates.

12. In the short term, mobile payments services can help increase financial inclusion (Figure 9, Boxes 1 and 2). While direct contact with financial infrastructure remains low, in particular for the most vulnerable parts of the populations, mobile phone penetration has increased rapidly in the last years. Taking into account that subscription rates should be discounted as subscribers possess on average two SIM-cards in Guinea-Bissau (World Bank, 2014b), recent numbers suggest that around 36 percent of the population possess at least one SIM card. Two mobile payment providers currently operate in Guinea-Bissau, with equal market shares. The development of mobile financial services could thus serve as a means to increase financial inclusiveness for the unbanked population. In addition, the magnitude of remittances in Guinea-Bissau suggests a substantial market for cross-border mobile payments. Box 1 summarizes the main pillars of the success of M-Pesa in Kenya, such as an inexpensive and flexible use of technology, a favorable macroeconomic environment, pre-existing banking infrastructure, support by the Central Bank, and risk management measures.

13. Box 2 points to the main means to mitigate risk related to mobile payments through the establishment of an oversight framework. These include minimum entry requirements into the sector, financial integrity controls, fund safeguarding, operational resiliency, and payment system stability.

The fast spread of M-Pesa after its introduction in Kenya in 2007 has helped reduce transaction cost, facilitated personal transaction, and contributed to the use of services of financial intermediaries. Based on IMF (2012), this box summarizes the main determinants of M-Pesa’s success as well as risk management issues.

Determinants of M-Pesa’s success. While a rapid expansion in the use of mobile phones has contributed to the success of the developments of the sector, the following structural factors have likely made it possible:

Risk management issues. Advice for risk-prevention for M-Pesa by the Fund and actions taken included:

Components of an Oversight Framework for Mobile Payments

Mobile payment services promote financial inclusion, but they carry a number of risks which could be mitigated by an oversight framework with the following components:

14. In the medium term, improvements in the business and legal environment would be necessary to improve access to financial services (Figure 10). The authorities need to address weak transparency, underdeveloped judicial and business environments, limited financial skills, and distortive taxation (such as the tax exemption of interest revenue on government paper, while other interest revenue is not tax exempt), suboptimal prudential regimes and regulatory forbearance, which remain the main obstacles to financial sector development. Lower collateral requirements stemming from a better legal environment and higher accounting standards could increase firms’ access to financing and boost investment and GDP.

For consistency of the comparison between Guinea-Bissau and the WAEMU, the source of all financial soundness indicators (FSI) used in this note is BCEAO headquarter; these FSI may differ from the ones reported in the accompanying staff report.

For most indicators, WAEMU averages or ranges are provided. More ambitious benchmarks include Ghana, Kenya, Lesotho, Rwanda, Tanzania, Uganda, and Zambia for Africa, and Bangladesh, Cambodia, India, Laos, Nepal, and Vietnam for Asia.

(In Percent of Banks)

Guinea-Bissau: Actual and Implied Credit to the Private Sector

(In Percent of GDP)

Factors which Close the Financial Gap

Cost of Credit in Guinea-Bissau 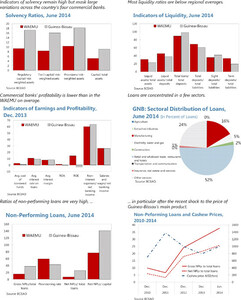 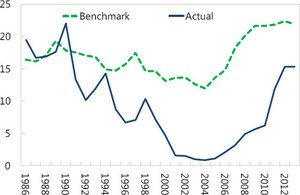 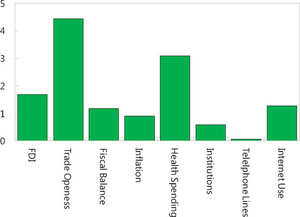 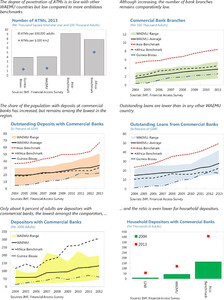 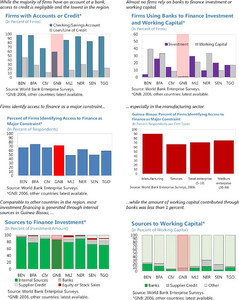 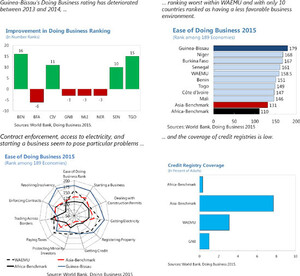