1. This paper identifies episodes of large and sustained current account surpluses in advanced economies (AEs) and compares Germany’s ongoing surplus with those episodes. In doing so, it aims to put Germany’s external position in a historical and cross-country context drawing from 55 years of data across 20 AEs. This comparison shows that the real growth of all domestic demand components, particularly of private investment, was remarkably weak during the latest sustained surplus episode in Germany in comparison with both “normal times” and other AE surplus episodes. Neither Germany’s nor a typical AE surplus episode has been accompanied by visible, broad-based competitiveness or terms of trade gains; however, when competitiveness is measured by the ULC based REER for the manufacturing sector, a depreciation is in evidence in the run-up to and early years of Germany’s surplus episode. Around the time of exits from these episodes, in the typical case, imports and exports growth both slowed down, the trade surplus narrowed, output gaps turned from negative to positive and potential growth accelerated.

2. Large and sustained current account surplus episodes are defined as periods when the current account balance exceeds 2 percent of GDP for at least 5 years. These criteria identify 21 episodes.2 Among these, 5 took place in financial centers (Singapore, Switzerland, Hong Kong SAR) and 7 continue to date, including Germany’s (Table 1). Despite the relatively low thresholds set for a surplus to qualify as large and sustained, the identified episodes have been long, with a median duration of 13 years, and large, with a median surplus of 5.3 percent of GDP. Excluding financial centers from the sample has no impact on median duration and reduces the median surplus only slightly.

3. Germany’s current large and sustained surplus episode began in 2004 and continues to date. The duration of this episode so far (11 years) matches exactly the median duration for AEs excluding financial centers. Its size exceeds the median and is somewhat above the mean for the AEs excluding financial centers. Though it is hard to predict the evolution of Germany’s current account going forward, the latest projections suggest that both its duration and size will exceed historical medians.

4. Compared to the ongoing surplus episodes in Europe, Germany’s surplus does not stand out in terms of its size or duration. Sweden, the Netherlands, and Denmark have experienced large and sustained surpluses since 1995, 2001 and 2008 respectively, with average current account surpluses of 5.7, 6.6 and 5.3 percent of GDP, respectively. Germany’s surplus, with an average size of 6 percent, is right around the mean of these episodes.

5. Germany had a previous large and sustained surplus episode during 1985-1991.3 It is interesting to note that even in the absence of the factors that are commonly viewed as playing a role in the current episode, such as demographic changes, wage moderation or the EMU, Germany experienced a large and sustained current account surpluses, albeit shorter and smaller than the ongoing one. Understanding the drivers of the 1985 episode could be a fruitful avenue for future research and could shed light on the question of whether there are any very persistent factors common across these two episodes.

6. In a typical AE surplus episode and in that of Germany, import and export performance was robust both within and outside of the episodes. It is not surprising for strong import growth to go hand-in-hand with strong export growth as exports tend to have high import intensity. Comparing the AE median and Germany within the episodes, Germany’s surplus was characterized by mildly weaker export performance and noticeably weaker import growth (Figure 1).

7. Germany’s surplus has been characterized by remarkably weak domestic demand.4,5 In fact, Germany’s real domestic demand growth during its surplus episode was less than half of its growth in “normal times.” The weakness was broad based, involving all domestic expenditure components. While this pattern is typical of other surplus episodes, it is much starker for Germany. The weakest performance has been that of private investment, which grew by a small fraction of its typical growth rate. Private consumption and government expenditure, on the other hand, during the surplus episode grew by only about 1/3 and ½ of the growth rate experienced outside of surplus episodes, respectively. Part of the reason why government expenditures have fared somewhat better than private consumption and investment may be due to the fiscal stimulus observed during the global financial crisis. Looking at the structural fiscal balance confirms that Germany’s fiscal position has been stronger during its surplus episode than outside, a difference more pronounced in the case of Germany than in other surplus episodes.

8. The global financial crisis may have contributed to the weakness in Germany’s domestic demand during its surplus episode. Since the global financial crisis and Germany’s current account surplus episode overlapped for the most part, some of the observed weakness in aggregate demand may be attributed to the crisis. However, because the crisis was a global shock it cannot have been the only factor explaining the stronger current account in Germany, as all countries cannot improve their current accounts at the same time in the face of weak domestic demand. Hence, Germany specific factors must have played a role, too.

10. The surplus episode was associated with competitiveness gains as measured by relative unit labor costs. Unlike the NEER, the CPI based real effective exchange rate (REER) of Germany depreciated overall in the entire sample, on average by 0.8 percent in 1980-2003 but mostly in the early 1980s owing to inflation rates above 5 percent during 1980-1982. Within its surplus episode, Germany’s REER continued to depreciate on average but the rate of depreciation was lower than outside of the episode. The ULC based REER, on the other hand, points to competitiveness gains for Germany during its surplus episode and losses outside of it. In contrast, in other advanced countries ULC-based competitiveness improves within and outside of surplus episodes.6 The pattern for Germany is consistent with the fact that Germany experienced significant competitiveness gains relative to the rest of the euro area after the launch of the euro. Between 2000 and 2007, Germany’s manufacturing ULC declined by 11 percent while that for the Netherlands, France and Italy increased by 6.4, 0.6 and 19.4, respectively.

11. With the help of the dataset, it is possible to shed light on what factors were associated with exits from large current account surplus episodes. Even though Germany is not expected to exit its surplus episode in the medium term as its current account is projected to remain well above the 2 percent threshold in the next 5 years, it is nonetheless interesting to establish patterns of past experiences. It should be noted that these historical patterns may be of limited usefulness for the case of Germany, to the extent that rapidly aging population is a major factor driving the current surplus: “aging out of current account surpluses” is still uncharted from an empirical perspective.

12. For the analysis of exits, we rely on 14 complete episodes (Figure 3). In this figure, date t=0 corresponds to the last year of the surplus episode while t=1 is the first year after exit. Hence, each plot covers the last 6 years of surplus episodes and the first 5 years after exit. Given that the number of complete episodes is only 14, the analysis focuses on the medians as the means would be particularly susceptible to the influence of outliers. The downside of this approach, however is that the usual identities do not necessarily hold for the medians even though they hold for the means. For example, the identity tb = x − m holds for each individual country and also for the mean across countries. However, this need not be the case for the medians.

13. Exports and imports to GDP ratios start falling gradually four years before exit, with the difference between the two narrowing progressively. In the year of exit, a more abrupt adjustment takes place, entirely driven by a sharp (but short-lived) pickup in the imports-to-GDP ratio, while the exports-to-GDP remains unchanged. Even after exiting, in the typical episode the trade balance remains in a surplus between 1-2 percent of GDP. In the run-up to the exit, real investment bounces strongly. The strong investment performance lasts for about 4 years, from year -3 to 0, ending sharply afterwards and in fact registering a negative value in year 3. Consumption growth also appears solid, while government spending is the strongest component in the year of exit; hence fiscal policy may be one of the drivers of external adjustment.

14. Both cyclical and structural factors seemed to be at work during exits. In terms of comparisons with potential GDP, the first two years of the typical adjustment were associated with positive output gaps of 0.6-0.7 percent of GDP. Afterwards, output gaps turned negative. The fast growth period from year -2 to +1, as highlighted above, started with a negative output gap of -1.4 percent in year -2 and ended with a positive gap of 0.6 percent in year +1. During the same period, potential growth also accelerated, particularly from year -1 to +1. Overall, the strong growth observed around exits appears to have cyclical as well as structural components, evidenced by the reversal of the output gap and the strengthening of the potential growth.

15. To conclude, a key characteristic of the ongoing large and sustained current account surplus of Germany is the weakness of its domestic demand. In particular, slow growth in private investment stands out in comparison with “normal times” as well as other AE episodes. On the other hand, relative price changes appear to be muted, perhaps with the exception of ULC based REER for the manufacturing sector which deprecated in the run up to and early years of Germany’s episode. Focusing on the complete episodes, which excludes Germany’s, reveals that exits from current account surpluses have been associated with a shrinking of the trade surplus and strengthening of both cyclical and potential GDP growth.

This definition follows Chapter 3 of the 2007 World Economic Outlook.

The end to this episode at the time of the re-unification was most likely driven by a change in the coverage of WEO’s balance of payments data that referred only west Germany until June 1990 and started to include the eastern Lander thereafter.

Excluding the financial centers from the analysis does not change the results shown in the figure significantly.

The statistics reported in Figure 1 for Germany refer only to the 2004-2014 episode and do not include the 1985-91 episode. The later is also excluded from statistics referring to “outside of episodes” periods.

Note that ULC based REER data are limited and available for only 11 of the 21 surplus episodes this note identifies. For Germany it covers 1993-2014. 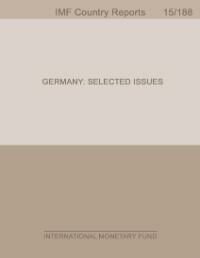 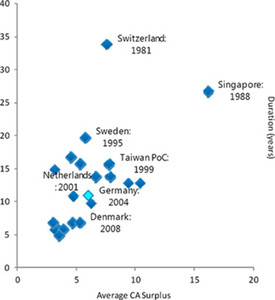 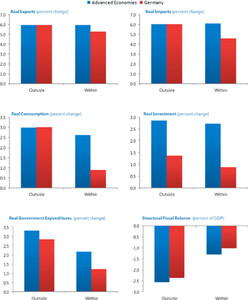 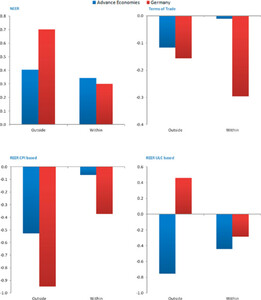 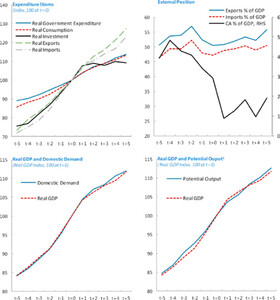