Institutional rigidities have contributed to the persistence of low employment rates and high unemployment in the wake of the crisis. Recent reforms have reduced the labor tax wedge but important challenges remain in a number of areas—including the minimum wage, job search incentives, and enterprise-level flexibility in wage negotiations.

1. High structural unemployment. Notwithstanding recent reforms and economic recovery, high unemployment is projected to persist over the medium term. Weak economic growth during the crisis years, in combination with long-standing labor market rigidities, has hampered job creation and pushed unemployment to 10.5 percent in April 2015,2 up from a trough of 7.5 percent in 2008. Structural unemployment has increased steadily since the onset of the crisis, and about two in five unemployed are now out of work for over a year. Employment rates have remained below those in many peer countries. Even with the sustained recovery projected under baseline assumptions, the unemployment rate would decline only very gradually, reaching 9 percent in 2020.

2. Segmentation. The labor market remains segmented. Youth unemployment stands at around 24 percent, and more than 20 percent of 20-29 year olds are neither in employment nor education. Uncertainty surrounding the pace and strength of recovery, coupled with judicial constraints around dismissals, have contributed to labor market duality, with 55 percent of workers below 25 being hired on a fixed-term contract and 85 percent of all new contracts being fixed term, most with very short durations. The unemployment rate among the low skilled increased fast throughout the crisis, and came to almost three times that of skilled workers in 2012. There is also evidence that people with an immigration background find it particularly difficult to enter the labor market (CEPREMAP, Edo and Jacquemet, 2014).

3. Labor costs. Real wages have continued to grow despite high and rising unemployment (see panel chart). Since the onset of the crisis, basic monthly salaries have grown steadily at around 2.1 percent per year, and real wages have increased cumulatively by 4.6 percent despite a 3 percentage point increase in the unemployment rate and cumulative GDP per capita loss of 0.8 percent. Labor costs have moderated somewhat, partly as a result of payroll tax reductions, and the authorities have advanced wage containment measures (a public service wage-scale freeze since 2010 and no discretionary increases in the minimum wage above formula since 2012).

4. Productivity link. France’s steadily rising labor force requires strong employment growth to gradually reduce the unemployment rate. In particular, it would require significant job creation for the low skilled. Since the currently high level of labor productivity in France partly reflects the large employment gap between skilled and low-skilled workers, in contrast for example to Germany, the challenge will be to reduce unemployment while taking steps to preserve or improve productivity growth by building human capital.

5. Causes. The literature points to a broad range of institutional factors that contribute to wage rigidity and structural unemployment in France.3 These include a high minimum wage, the labor tax wedge, costly and uncertain dismissal procedures, restrictions on firm-level bargaining, skill mismatches and inadequate training programs to address them, and unemployment and social benefits with insufficient job search incentives.4 While the exact contribution of each of these factors to suboptimal labor market outcomes is difficult to estimate, a decisive reduction in structural unemployment would likely require a multi-pronged approach to labor market reform.

6. Minimum wage. In France, the minimum wage has long been an important social and political symbol. It plays a major role in the wage formation process and guarantees a basic living income for working people.

7. Dismissals. Costly and uncertain dismissal procedures have discouraged hiring into permanent jobs, contributing to labor market duality. France’s employment protection legislation requires strong justification for any dismissals. Unjustified dismissals are subject to labor court review that can improve on the worker’s separation package. Labor courts deliberations can be very slow, their prescribed conciliatory procedures are often ineffective, decisions are frequently subject to appeal, and jurisprudence across tribunals varies widely (National Reform Program, 2015). This system encourages the use of fixed-term contracts, where termination cost is set at 10 percent of the total gross pay since the beginning of the contract.7 It also has led to the reliance on the so-called rupture conventionnelle, introduced in 2008, which allows for voluntary separation from employment leading to formula-based termination compensation.

8. Wage bargaining. At the enterprise level, there are limits on social partners’ flexibility to agree on hours and wages. According to the labor code, company-level agreements must either match or improve upon the salary and job classifications embedded in the branch-level collective agreements. In this context, mandatory annual wage negotiations for medium and large companies, coupled with high dismissal costs, create pressure for wage increases even when productivity gains are tepid (Enderlein and Pisani-Ferry, 2014). On average over 2008–14, wages negotiated at the firm level increased by 1 percentage point above the rise in the minimum wage.

9. Training and education. The literature suggests that structural unemployment often reflects skill mismatches induced by structural change (see, for example, Ljunqvist and Sargent, 1998). Young people entering the labor market may not have the skills most in demand, while long-term unemployed can progressively lose skills acquired in previous job. Vocational education and professional training could facilitate rapid reintegration of unemployed in the labor force. There is some evidence that these factors play a role in France. Each year, 140,000 young people leave the education system without completing school. The professional training system, which costs about 1.4 percent of GDP, has been slow to respond to the needs of job seekers. Its resources are often managed by social partners or at local government level and not targeted to the low skilled, the unemployed, and those most in need of training. Moreover, in contrast for example to Germany, most young people in professional education are not employed or in apprenticeships.

10. Benefits. Eligibility conditions for unemployment benefits are comparatively lenient while payouts are generous (Europ’Info, 2012). Workers become eligible for unemployment benefits after only 4 months of service (the shortest time to reach eligibility in Europe) and qualify for up to 24 months of benefits after working for just 2 years (the fastest among the largest European countries). While the replacement rate is broadly on a par with other European countries, the maximum monthly benefit is capped at about €7,000, well above peers. In the first year of unemployment, the salary of a “reasonable job offer” that the unemployed should accept is set as high as 85–100 percent of the previous salary. Moreover, the unemployed can reject the first such offer without penalties. The system also does not provide for a progressive reduction in benefits (degressivity) for long-term unemployed to encourage their rapid return to the labor market. While benefit recipients are required to conduct an active job search, this condition is not always strictly enforced for either welfare or unemployment benefits.

11. Recent reforms. In the early 2000s, strong economic growth combined with labor subsidies supported solid employment creation (1.2 percent on average over 2001–07). This coincided with the gradual introduction of the 35-hour workweek starting in 2000, whose impact is still debated—some studies show that it had barely any impact on job creation while raising labor costs for firms (Saint Paul, G., 2015; Cahuc, 2001), while others find positive employment effects from the reduced working week (Fiole and Roger, 2002, Askenazy, 2013). This partly motivated the Aubry and Fillon cuts in social security contributions for unskilled workers (Nouveau, C. and B, Ourliac, 2012. Since the onset of the crisis and the resulting stagnation in employment growth (0.1 percent on average over 2008-14) and marked increase in unemployment, a number of steps have been taken to improve the functioning of the labor market. Key labor market policies have included:

12. Reforms underway. The government is pursuing additional reforms on a number of fronts. The Macron law foresees a reform of the prud’hommes system aimed at reducing judicial uncertainty around individual dismissals. The draft Rebsamen law, aimed at improving the social dialogue, would streamline mandatory discussions between social partners in SMEs. In early June, the government announced a package (to be adopted over 2015–16) to promote employment by removing obstacles to job creation most constraining to SMEs. Labor market reforms include measures to: (i) facilitate “job preservation agreements” by extending their duration from two to five years, introducing fast-track dismissal procedures for workers that do not endorse the agreement, and providing for its possible suspension if the firms’ situation changes; (ii) cap severance payments that can be awarded by labor courts in regular dismissal cases; (iii) increase to two the number of authorized renewals for fixed-term contracts (now they can only be extended once); (iv) increase by 40,000 the training slots aligned with company needs (adding to the 60,000 slots created in mid-2014); (v) grant a subsidy of up to EUR 4,000 for micro companies recruiting their very first employee for one year and over; and (vi) extend the trial period of apprenticeships contracts by counting towards it only the days of actual work in the company.

13. Further reform options. While the distortions underlying high unemployment and labor market segmentation are well established, it is less obvious what impact individual piecemeal reforms may have, in part because of synergies among them and with other structural reforms. This has prompted calls for a comprehensive employment overhaul (for example, see the Jobs Acts à la française advanced by a group of French economists, Box 1). The comprehensive reform proposals center on (i) better aligning wages to productivity developments and employment conditions (in particular for low-skilled workers); (ii) using job preservation agreements preemptively (for example, by expanding their eligibility to companies facing challenging competition in the market, accords offensifs) and decentralizing the wage bargaining process with greater recourse to the special relief clauses in branch collective agreements; (iii) boosting job search incentives for benefit recipients; (iv) improving the efficiency of vocational training (Enderlein and Pisany-Ferry, 2014, Tirole and others, 2014); and (v) reducing duality by increasing flexibility of open-ended contracts. One proposal addressing labor market duality contemplated introducing a single open-ended contract with the same termination procedures applicable to all contracts (Blanchard and Tirole, 2003), and with compensation for layoffs being calculated according to a rate setting mechanism based on seniority.8

A group of French economists led by Nobel Laureate Jean Tirole has recently called for a comprehensive Jobs Act to combat unemployment, which would include four pillars:

In addition, a Banque de France study points to a link between housing-related costs of living and wage pressures (Carluccio, 2014).

The minimum wage is uniform across regions, professions and skill levels, with a small reduction of 10-20 percent for inexperienced young people under the age of 18.

Each year, the minimum wage is automatically indexed to inflation and half of the average real wage increase in the economy. To this, the government can add a discretionary increase (coup de pouce), last applied in 2012.

Out of 4.6 million temporary private contracts that were concluded in the first trimester of 2014, 3.8 million were for less than a month, and most for less than eight days (Askenazy 2014). Very short contracts are widely used in some sectors as successive renewals are unconstrained unlike for fixed term contracts. 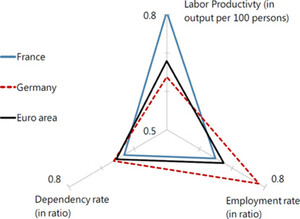 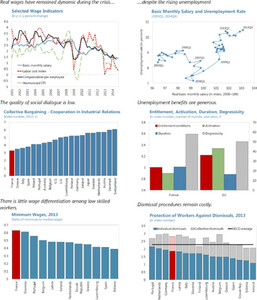