1. Foreign investment has revived Zambia’s mining sector. Copper mines were privatized in the late 1990s and early 2000s after three decades under government control. Since then, foreign companies have invested around US$10 billion in the sector, revitalizing Zambia’s production to historical high levels. Copper production has trippled from about 250,000 tons in 2000 to over 750,000 tons in 2013.

2. The mining sector’s direct contribution to government revenues (royalties, corporate income tax) has been low. During 2000–07, on average, the sector contributed less than 0.1 percent of GDP to government revenue while accounting for about 6.2 percent of GDP (Figure 1). This low contribution reflected a combination of low international copper prices, depressed production, low profitability (due in part to large capital investments made to restore production resulting in significant tax credits), and the concession agreements granted to mining companies. Revenues have increased with increasing copper production, higher sector value-added, rising prices, and changes to the fiscal regime (Figure 2).

3. Reflecting persistent concerns about the low contribution of the mining sector to budget revenues, the government has amended the fiscal regime many times over the last seven years (Table 1). In 2007, it increased both the corporate income tax (CIT) and the royalty rate. In 2008, it introduced a variable income tax schedule and reduced the depreciation rate for capital expenditures for non-exploratory activities. Royalty rates were further increased in 2012. Along with higher production, these tax changes increased the mining sector’s direct contribution to revenues from an average of 0.7 percent of GDP in 2005–09 to close to 3 percent of GDP in 2010.2 As a result, Government revenues from the mining sector compare favorably with other mineral exporting countries (Figure 3).

Zambia: Reforms to the Mining Fiscal Regime for Base Metals, 2006–15

As per the original 2015 budget. 8 percent royalty for underground and 20 percent for open cast mining operations as final tax. 30 percent CIT on income earned from tolling, and 30 percent CIT on income earned from processing of purchased mineral ores, concentrates and any other semi-processed minerals, currently taxed as income from mining operations. Income from industrial mineral will be taxed at the variable tax rate (30 percent to 45percent). Mineral Royalty at 20 percent on a person in posession of minerals where the supplier to that person has not paid mineral royalty tax.

Zambia: Reforms to the Mining Fiscal Regime for Base Metals, 2006–15

As per the original 2015 budget. 8 percent royalty for underground and 20 percent for open cast mining operations as final tax. 30 percent CIT on income earned from tolling, and 30 percent CIT on income earned from processing of purchased mineral ores, concentrates and any other semi-processed minerals, currently taxed as income from mining operations. Income from industrial mineral will be taxed at the variable tax rate (30 percent to 45percent). Mineral Royalty at 20 percent on a person in posession of minerals where the supplier to that person has not paid mineral royalty tax.

B. Changes to the Mining Fiscal Regime in the 2015 Budget

5. The 2015 budget introduced major changes to the mining fiscal regime. It moved away from a system comprising a uniform royalty rate (6 percent), corporate income tax and a variable income tax, to a royalty only system with differentiated rates for underground mines (8 percent) and open cast mines (20 percent). While the corporate income tax was abolished on mining operations, it was retained for income earned from tolling and from processing of purchased ores, concentrates and other semi-processed minerals. The authorities estimated that the change would boost budget revenues from the mining sector by about 1 percent of GDP, based on an assumption that the change would have no adverse impact on production.

6. A comparison of prevailing royalty rates in 2014 shows that, at 6 percent, Zambia’s royalty rate was among the highest fixed rate among copper producing countries (Annex 1). Governments are attracted by royalties because they generate an immediate stream of revenue once mining production starts. However, royalties discourage investment because they do not respond to changes in costs.

7. The move to a royalty-based regime with higher rates increases production costs upfront. Mines that were marginally profitable under the previous regime may become unprofitable. In general, companies are likely to react to lower profitability by curtailing some planned activities and investments.

8. A cross-country analysis was undertaken to assess the mining fiscal regimes in place in Zambia before and after the changes introduced by the 2015 budget. The analysis, using the FARI model, employs three key indicators:

9. The modeling is based on two stylized copper mining projects (Table 2): (i) a low cost (profitable) project; and (ii) a higher cost (less profitable) project. The projects were constructed using cost structures and production profiles for actual (and similar) mining projects in Zambia, but are not fully identical to any particular existing mines. The higher cost project is characterized by substantially higher investment, resulting in lower pre-tax rate of return.

10. Assessment of the 2014 regime. The estimated values of the effective tax rate indicators for the two stylized mines under the fiscal regimes in Zambia and comparator countries in 2014 are presented in Figure 4. The main results for the low cost mine are that: (i) at 50 percent, the AETR for Zambia was the second highest among major copper producing countries; and (ii) at over 40 percent, the METR for Zambia—calculated at a 12.5 percent hurdle rate of return for all countries—was also high relative to peer countries. For the higher cost mine, the model shows Zambia’s fiscal regime as less attractive for investors than those in other copper producing countries. The required breakeven price rises from slightly above US$3,100/ton for the low cost mine to US$6,130/ton for the higher cost mine.

D. Estimated Impact of the 2015 Change in the Fiscal Regime

11. Again using the FARI model, the impact of the new regime for the two stylized mining projects was simulated. Indicators (AETR, METR, and the breakeven price) were calculated under seven alternative mining fiscal regimes (Table 4): six from Table 1 above (to show the evolution of Zambia’s regime since 2006) and an alternative more progressive regime than the 2014 regime (with an adjustment to the variable income tax component).

12. Relative to the 2014 regime, the AETR decreases under the 2015 regime, except for the higher cost project with 100 percent open pit mining operations. For such a project, the sharp increase in the royalty rate (from 6 percent to 20 percent) more than offsets the removal of the 30 percent corporate income tax (Figure 5). The results also show that the 2014 regime with a more progressive variable income tax could foster new activity in the sector by allowing companies to develop less profitable projects and thus enhancing the government’s revenue prospects over the medium-to-long-term. The breakeven price required in Zambia increases under the 2015 regime, thus reducing the potential for new investment in the sector. Similarly, the METR also increases for both projects under the new regime, meaning higher disincentives for new investments in the sector.

13. The new fiscal regime has not boosted government revenues. Reflecting the negative impact on the sector’s profitability, some mining companies announced plans to reduce operations and postpone new investments. For example, Barrick Gold announced plans to shut down operations at its Lumwana mine, and Konkola Copper Mines (KCM) announced a sharp cut in operations at the Konkola mine. The Zambia Chamber of Mines (ZCM) estimated that annual production lost could reach 150,000 tons and about 12,000 jobs could be lost in 2015. Preliminary information through the first quarter of 2015 shows mineral royalties is 41 percent below the government’s target. This underperformance is associated to both the new fiscal regime and lower copper prices.

14. The new regime introduced complexities to revenue administration. There is a risk that companies operating both open cast and underground mines would re-organize production to avoid the higher royalty rate, thus hurting government revenue. The ZRA will need to intensively monitor mines’ operations to ensure the government collects the correct level of revenues. This includes defining mechanisms to control mining companies which process both own and purchased/tolled copper. In this context, it will be import for the ZRA to continue strengthening its capacity to monitor activities in the sector including by fully implementing the Mineral Value Chain Monitoring framework.

15. Amid concerns over its negative economic and social impact, President Lungu asked for changes to the 2015 fiscal regime. The President tasked a technical committee to review the new regime and propose alternative options including: (i) maintaining status quo with case-by-case relief, (ii) modification of the regime, and (iii) temporarily reinstate the 2014 regime. Staff advised the government to avoid mine-by-mine agreements that would likely entail the government foregoing substantial revenues to keep individual mines in operation.

16. Cabinet announced changes to the 2015 fiscal regime on April 20. The changes imply going back to the dual system that combines a royalty with a CIT. The main changes include: (i) single royalty rate set 9 percent for both open cast and underground mining operations; (ii) 30 percent CIT on mining operations; (iii) 35 percent CIT on income earned from processing, (iv) variable profit tax on income earned from mining activity at 15 percent when the taxable income exceeds 8 percent of the gross sales; and (v) deduction of tax losses carried forward limited to 50 percent of taxable profits. Additionally, the government indicated that it will stiffen penalties for tax offenders and introduce stringent mechanisms to effectively monitor mining activities and ensure greater transparency among mining companies when reporting revenue and expenditure.

17. The changes are expected to take effect from July 1, 2015. Parliamentary approval is required before these changes are implemented. Additionally, the ZRA may need some time to put in place the internal mechanisms for tax filing and payment by mining companies under the revised mining fiscal regime. The Chamber of Mines has welcomed the return to the two-tier system. However, mining companies are assessing how the new royalty rate and reintroduction of the CIT will impact their operations. In this context, it is not clear whether the new regime approved by Cabinet is a permanent fix or whether more changes are to be expected. Against this background, it remains critical to quickly resolve these issues to strengthen stability and predictability going forward.

18. The amendments approved by Cabinet to the 2015 are changes in the right direction. The return to a dual system (i.e., royalty rate and corporate income tax-CIT) supplemented by the variable income tax component will allow for flexibility to fluctuating economic/financial conditions helping raise government revenues when copper prices are rising while enhancing the prospects for low profit projects when there is a downturn in prices.

Includes only royalties and corporate income tax (i.e., excludes Pay-As-You-Earn paid by workers employed by the sector as well as Value Added Tax and customs duties paid by the sector).

The Fiscal Analysis of Resource Industries (FARI) model is a tool developed in the IMF’s Fiscal Affairs Department. It is widely used to compare fiscal regimes within a single country or across commodity producing countries. 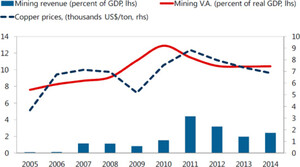 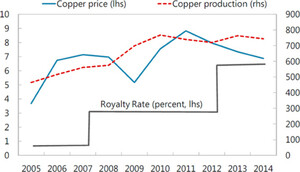 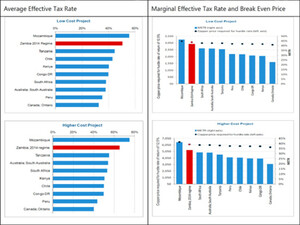 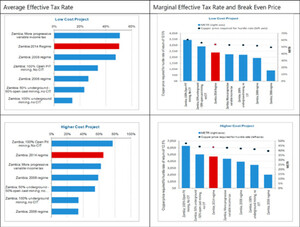