Holding Up Half The Sky: Analysis of Female Labor Force Participation in India1

India stands out among G-20 peers as having one of the lowest rates of female labor force participation. A growing literature shows that boosting labor force participation of women leads to significant economic gains. This chapter finds that a number of policy initiatives can be used to tackle low female economic participation, including increased labor market flexibility, higher investment in infrastructure, and enhanced social spending.

2. India has one of the lowest female labor force participation (FLFP) rates when compared with emerging market and developing countries. India’s FLFP rate is around 29 percent (of the female population aged 15 years and above) at the national level (with significant differences across Indian states)—a level much below that of other emerging market peers. FLFP rates have been falling in India, in contrast to most other developing countries and emerging market economies (text chart). As well, the gender gaps in participation (between males and females) are the second highest among G-20 economies, at 52 percent (with only Saudi Arabia having a larger gender participation gap).

3. There is a growing literature on the determinants of FLFP as well as the economic implications of low female participation (summarized in IMF 2013). This literature highlights that gender gaps in labor force participation (FLFP), entrepreneurial activity, or education impedes economic growth (e.g. Cuberes and Teignier, 2014; Esteve-Volart, 2004, and Klasen and Lamanna 2008 among others). Cuberes and Teigner (2012) simulate an occupational choice model that imposes several frictions on female economic participation and their wages, and show that gender gaps in entrepreneurship and in labor force participation significantly reduce income per capita. For India, they find that income per worker is reduced by 26 percent. A number of recent empirical papers have examined low and declining female labor force participation in India. Klasen and Pieters (2012) find that for urban Indian women, participation in the workforce at lower education levels is dictated by economic necessity, and only for highly educated women there is a pull factor to enter the workforce. Esteve-Volart (2004) uses panel data on Indian states to show that the ratio of female to male workers (and managers) is positively correlated with growth and living standards. Finally, OECD (2014) finds that female economic participation (which includes labor force participation and participation in entrepreneurial activities) in India remain low and that raising FLFP through selected policies could boost economic growth by around 1½–2½ percent per annum.

5. The following stylized facts emerge from the household survey data:

6. The following questions are analyzed:

7. A two stage estimation procedure is used. In the first stage, an individual’s expected wages are estimated as follows:

where w is the log of daily wages and Z is a vector of individual and household characteristics variables including: age and age squared, dummy variables representing literacy, levels of educational attainment, marriage, children aged 0 to 4, and 5 to 16, and whether the individual lives a rural or urban area. In the main specification, the probability of being in the labor force is then estimated as follows:

where Li = 1 if individual i is in the labor force, is the log of daily wages, EPL is the employment legislation index discussed below, and X is a vector of individual and household characteristics variables including:

We estimate weighted logit models to ensure the estimates represent the population, unlike previous studies using the NSS Employment and Unemployment surveys. Standard errors are clustered at household level. Other specifications focus on employed individuals only, to study the factors that increase the probability that an individual is employed in the formal sector instead of the informal sector.

8. It has been widely noted that relatively inflexible labor markets have weighed on employment generation in India. There is considerable cross-state heterogeneity in labor market rigidities. Accordingly, we use a state-level index to gauge the flexibility of Indian labor markets. This index is the OECD’s Employment Protection Legislation (EPL), which is based on a survey of labor market regulations. It counts amendments to regulations that are expected to increase labor market flexibility. This includes amendments to the Industrial Disputes Act (IDA),2 the Factories Act, the Shops Act, and the Contract Labor Act. For example, with respect to the IDA, the index would take a higher value for Indian states that: require a shorter amount of time to give notice to fire; have made amendments allowing certain exemptions to the Act, that have lowered the threshold size of the firm to which chapter VB applies; exclude the complete cessation of a certain function from the definition of retrenchment; have instituted a time limit for raising disputes; or have instituted other amendments to the procedures for layoffs, retrenchment, and closure that should ease planning for firms. The EPL index also captures differences in the ease of complying with regulation (e.g. rules on dealing with inspectors, registers, filing of returns). As in Dougherty (2009), we scale the index, which takes values from 14 to 28, by its maximum value, thus ending with a variable that ranges from 0.5 to one.

9. The main regression results are as follows:

Categorized as informal or formal based on location of work.

Categorized as informal or formal based on location of work.

10. In sum, there is a large gap in the labor force participation rates of men and women in India. This gap should be addressed to fully harness India’s demographic dividend. A number of policy initiatives can be used to address this gap. These include increased labor market flexibility (which could lead to the creation of more formal jobs), allowing more women (many of whom are employed in the informal sector) to be employed in the formal sector. Investment in infrastructure to improve connectivity would also help foster higher female participation. As well, higher social spending, including investment in education, can boost female labor force participation.

Prepared by Sonali Das, Sonali Jain-Chandra, and Naresh Kumar, based on a forthcoming IMF Working Paper.

Chapter VB of the Act requires firms employing 100 or more workers to obtain government permission for layoffs, retrenchments and closures (as of 1984).

(In percent of female population ages 15+) 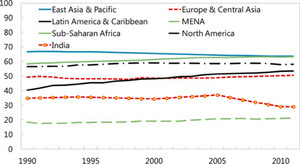 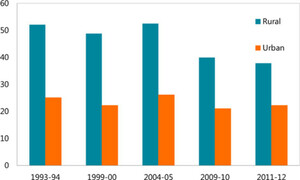 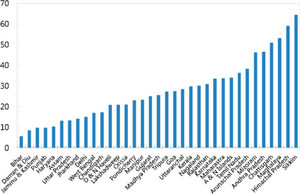 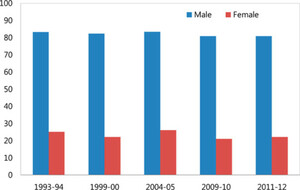 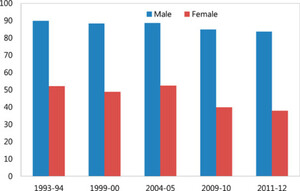 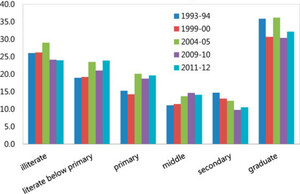