Corporate Leverage and Investment in India1

About one-third of the decline in India’s corporate investment-to-GDP ratio since 2011/12 compared to the previous decade can be attributed to the build-up of corporate leverage. The corporate investment outlook will remain subdued in the near term, reflecting a weak investment pipeline and strains in corporate and financial balance sheets, which will take time to repair. Further measures to enhance the investment climate, alleviate supply side bottlenecks, and strengthen financial system buffers are needed.

1. Corporate leverage in India has been rising, is at high levels compared to other countries, and is concentrated in key sectors. The deterioration of corporate balance sheets in India has been concentrated in certain sectors, namely infrastructure, natural resource extraction, and construction. The share of debt of highly leveraged firms (firms with debt to equity ratios greater than two) has been increasing since the Global Financial Crisis, jumping from 21 percent in 2010/11 to 28 percent the following year, and then to 31 percent at the end of 2013/14. This raises the concern that the emergence of debt overhang in these sectors could hinder investment going forward.

2. Investment in India has slowed in recent years,

with gross fixed capital formation growth averaging 11½ percent per year over the decade ending in 2011/12 but falling to less than ½ of one percent during 2012/13–2013/14, to a large extent due to a fall in corporate investments. The economic significance of the fall in corporate investment has been large, with corporate investment as a share of GDP falling from 12.8 percent to 9 percent between 2010 and 2012. Anand and Tulin (2014) find that standard macro-financial variables cannot fully explain the slowdown in investment at the aggregate level, and that heightened uncertainty and deteriorating business confidence have played a key role.

3. High leverage has hindered corporate investments in India in recent years. Economic theory postulates that debt overhang leads to underinvestment (Myers, 1977) and credit rationing (Stiglitz and Weiss, 1980). Indeed, in recent years India’s most leveraged companies have had markedly lower investment rates when compared to their less-leveraged peers. To quantify the economic significance of leverage on investments, we estimate the econometric relationship between investment and leverage for Indian corporates. Given the increasing share of corporates with high leverage in recent years, and that investment has slowed more for highly-leveraged firms, estimation of threshold effects in the relationship between investment and leverage is also conducted.

4. The analysis is based on a large and comprehensive sample of Indian companies and takes into account a range of corporate financial metrics. The data is from the annual balance sheets of 4,537 non-financial firms from 2001/02 to 2013/14, taken from the Centre for the Monitoring of the Indian Economy (CMIE) Prowess database. The following equation is estimated:

where Investment for firm i in year t is purchases of fixed assets (expenditure on plants, property, and equipment) in year t as a share of previous year’s capital stock. Leverage is the debt to equity ratio, and X is a vector of control variables including:

5. The regression results confirm the expected negative impact of leverage on investment. Specifically, a one percentage point increase in a company’s leverage ratio leads to a 2½ percentage point decline in investment as a share of its capital stock. High leverage is often associated with higher debt service costs, which reduces space for companies to undertake fresh investments. The interest cover metric (ICR, the ratio of the earnings before interest and taxes to interest payments) of the Indian corporate sector’s financial health has deteriorated significantly over recent years (see Lindner and Jung 2014). Our econometric results confirm that a deterioration of ICR adversely affects investment. In particular, firms with a 1 percentage point better interest cover ratio have about 16 basis points higher investment to capital. Furthermore, these results are robust to GMM estimation methods, which account for the endogeneity of the lagged investment variable.

6. The results also reveal a greater adverse impact of leverage on investment for highly-leveraged companies. We investigate whether leverage above certain thresholds has a more detrimental effect on investment using three threshold leverage ratios: debt to equity ratios of one, two, and three. In each case, corporates with a leverage ratio over the threshold level have lower investment, on average, than firms with below-threshold leverage, and the relationship between leverage and investment is more negative for these firms. For example: (i) firms with a debt to equity ratio greater than two have 9 percent lower investment on average; and (ii) for a leverage ratio greater than two, a one percentage point increase in leverage is associated with investment that is an additional 0.5 percentage points lower.

7. The drag on investment by highly-leveraged companies will remain in the near term. About 15 percent of the firms in the sample have leverage ratios greater than two, while the remaining 85 percent of firms have an average leverage ratio of 0.6. Highly-leveraged corporates may need to focus on deleveraging before taking advantage of future investment opportunities. Some corporates are likely already credit constrained due to high leverage, which in turn continues to put pressure on the health of the financial system, in particular on the balance sheets of public sector banks (PSBs). This will further affect bank risk taking as well as the ability of the banking system to finance economic recovery (see also Selected Issues Chapter VIII).

8. The investment outlook remains subdued. Investment project announcements have shown weakness over the last couple of years, due to supply-side bottlenecks and policy uncertainty. Notwithstanding recent improvement in new project announcements, actual investment will take time to pick up, reflecting muted new private corporate undertakings of the last few years. As well, durable solutions to underlying supply bottlenecks (e.g. power sector and natural resource allocation) are needed to ensure viability of future investment. For firms that have become highly leveraged and the banks involved, further progress on working out stressed corporate debt is needed to ensure that the banking system has sufficient resources to provide credit commensurate with economic recovery. Enhancing PSBs’ loss absorbing buffers, specifically by raising their capital positions, would also help.

(as percent of GDP)

(In billions of Rupees)

(Value of new projects minus value of shelved projects, In percent of GDP) 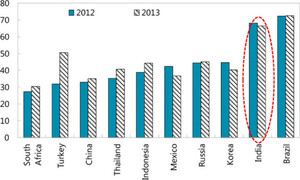 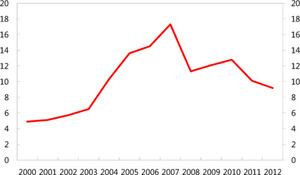 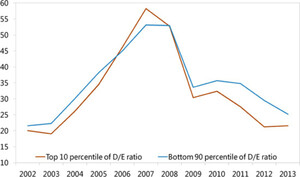 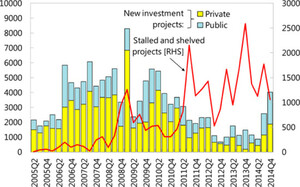 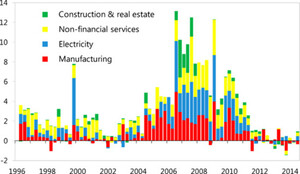