Effectiveness of Emerging Market Policy Responses Since the Taper Talk1

Global financial markets have seen several bouts of volatility in 2014 amid U.S. tapering and other external shocks. Sentiment toward emerging markets (EMs) remains sensitive to global developments and the risk of a reversal is high. To this end, EMs could draw policy lessons from their shared experiences following the taper talk episode of May 2013. This chapter assesses the effectiveness of major EMs’ policy actions in this episode, focusing on India and how its experience compares with others. Policy announcement effects are found to vary across countries, and the most positive ones for India include the NRI deposit and bank overseas borrowing schemes and the gold import duty. From a more “medium-term” perspective, EMs with decisive and comprehensive policy actions saw the largest improvements in fundamentals, and were relatively less affected during later bouts of market volatility.

1. Global financial conditions were volatile in 2014 and risks of a sentiment reversal remain high. While portfolio inflows to Emerging Markets (EMs) have resumed in 2014, concerns about rising U.S. interest rates and falling Chinese growth triggered several bouts of market volatility, with the latest round of major sell-off of EM assets in September 2014, suggesting that sentiment toward EMs remains sensitive to global developments.

2. To prepare for the possibility of another abrupt surge in financial market volatility, countries could draw lessons from their experiences following the taper episode of 2013. The policy responses among EM countries following the taper talk of May 2013 have varied, with some (e.g., Brazil, India and Indonesia) deploying a more comprehensive package of policy actions spanning fiscal, monetary and structural policies, and others (particularly South Africa) relying solely on the exchange rate as the main shock absorber.2 Lessons on the effectiveness of these policy actions can be drawn to better prepare for the next bout of financial market volatility.

3. This chapter assesses the effectiveness of major EMs’ policy actions in the post-taper talk episode of summer 2013, focusing on India and how its experience compares with others. The policy effectiveness is examined both in terms of the immediate impact on asset prices and the more “medium-term” impact on fundamentals. For the former, an event study is used to analyze whether EMs’ policy announcements had a countervailing effect on their exchange rate depreciation, equity price declines, and bond yield increases in two-day windows from May 23, 2013 to January 31, 2014, controlling for possible announcement effects from the Federal Open Market Committee (FOMC) meetings and the release of their minutes during that episode. For the analysis, policy announcements are grouped into six main categories: monetary policy (separating interest rate changes and liquidity measures), FX intervention (separating interventions in the spot market and forward market), capital flow measures (separating measures to encourage inflows and discourage outflows), financial sector policies, fiscal measures and import restrictions. Major EMs included in the event study are Brazil, Colombia, India, Indonesia, Malaysia, Mexico, Peru, Poland, Russia, South Africa, Thailand, and Turkey.3 To gauge the “medium-term” effect of major EMs’ policy packages on their fundamentals, a more descriptive cross-country comparison is used. The effectiveness of EMs’ policy responses can also be seen from their experiences in later bouts of market volatility, such as in late January 2014.

4. Assessments based on main policy categories suggest that, for India, measures to encourage capital inflows, gold import restrictions and fiscal actions had the largest immediate effects. On average, an announcement of a capital inflow measure (e.g., the NRI deposit and overseas FX borrowing scheme and the increase in FII limit) was followed by an exchange rate appreciation of 0.3 percent in the two-day window following the announcement. The announcements of an increase in the gold import duty and the cutting of non-planned current expenditure by 10 percent led to an exchange rate appreciation of 0.9 percent and an equity price increase of 1.5 percent, respectively, in the following two days. However, as the gold import duty increase and the expenditure cut were announced in the same two-day window, it is difficult to disentangle their effects on asset prices. Assessments based on policy categories suggest that other policy announcements do not seem to be effective on average.

6. A more granular analysis of each policy announcement in India following the May 22, 2013 taper episode suggests that other actions also had a significant impact on asset prices (see Table). As expected, market reactions to the NRI deposit and bank overseas borrowing schemes were very positive. Same for the restrictions on gold imports—in fact, the impact of an increase in the gold import duty seems even larger than that of a gold import quantity restriction, but again the former may partly benefit from the announcement of cuts in non-planned current expenditure by 10 percent in the same two-day window. Moreover, some monetary policy actions also helped. In particular, the repo rate hike in September 2013, the first in the post-taper period, helped boost market confidence, reflected in an exchange rate appreciation and increase in equity prices. The liquidity tightening measures of July 2013, on the other hand, triggered negative bond and equity market reactions, though it helped support the exchange rate. Finally, restrictions on capital outflows seem to have been counterproductive, with both the bond yield and exchange rate suffering.

7. For other major EMs, effective policy announcements differ across countries depending on their circumstances. 5 For Indonesia, the announcement in early July 2013 that Bank Indonesia would have bi-weekly auctions of FX swaps with resident banks supported the rupiah. Malaysia’s announcements of cuts in fuel subsidies, together with steps towards fiscal consolidation, helped reduce bond yields. Poland’s FX intervention in the spot market proved effective. Thailand’s and Russia’s announcements to strengthen their financial sectors, though not direct responses to the taper talk, helped support asset prices. Finally, Brazil’s FX intervention program was found to be effective in mitigating foreign exchange market volatility6 and Turkey’s macro prudential measures were successful in curbing household credit growth, even though the immediate announcement effect of these policies were not statistically significant.

8. Many major EMs undertook further policy adjustments in 2014 to address market volatility and strengthen their fundamentals:

10. A number of major EMs tightened monetary policy further in 2014 to better anchor inflation or reduce pressures on their currencies. Brazil hiked its policy rate by 375 bps between April 2013 and April 2014, and then by another 75 bps since October 2014. SouthAfrica has increased the policy rate by 75 bps in 2014. Following the latest round of fuel price increases in November 2014, Indonesia raised its benchmark and lending rates by 25 and 50 bps, respectively. Turkey increased interest rates by 550 bps in an effort to normalize its monetary policy framework in January, following the market turbulence in early 2014. Subsequently, the policy rate was eased by 175 bps from May to October 2014.

11. Other EMs eased to support growth. Hungary cut its policy rate to a record-low level of 2.1 percent from 3 percent at end-2013, and the Funding for Growth Scheme (FGS)—aiming to easing access to finance for SMEs—was extended until end-2015 with a doubling of the allocated amount for the second phase to the equivalent of 3¼ percent of GDP. Mexico reduced the policy rate by 50 bps in June 2014 to help support the incipient economic recovery in the context of limited inflationary pressures.

13. EMs with more decisive policy actions experienced the largest improvements in fundamentals, and were relatively less affected during later bouts of market volatility (see Figure). In particular, India had the most significant narrowing in its current account, especially compared with other EMs that were hit hard following the taper talk (i.e., Brazil, Indonesia, South Africa and Turkey). While several of these EMs recovered some of their losses in reserves and exchange rates, India and Indonesia saw the most improvement, thanks to their more comprehensive policy packages. These improvements are also reflected in their relative stability amid the market turmoil of late January 2014, especially for India, which was hardly affected at all. Moreover, India has managed to reduce inflation since May 2013, whereas SouthAfrica and Turkey saw a further increase in inflation from already-high levels. On the fiscal front, India has undertaken more consolidation in the past two years than most major EMs. Despite this progress, inflation and public debt remain high in India, calling for further efforts to reduce vulnerabilities in these areas.

These EMs were largest hit by markets during May–August 2013—that is, their exchange market pressure index (a combination of changes in exchange rates and reserves) exceeds one standard deviation in at least one of those months.

The results of the event study should be interpreted with caution. For many policy announcements, the impact on asset prices is ambiguous or even counter-intuitive—this does not necessarily mean that the policy action is ineffective. Market reactions are driven by many underlying factors and are particularly complicated in an episode with high market volatility and numerous policy actions both domestic and abroad. Although the use of a very short time window for the event study limits the impact of non-domestic policy-related factors, it cannot eliminate such an impact.

(In billions of USD) 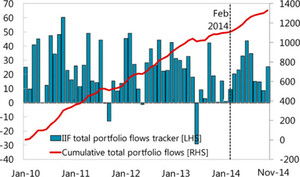 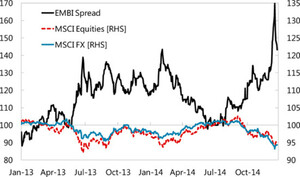 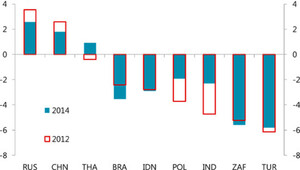 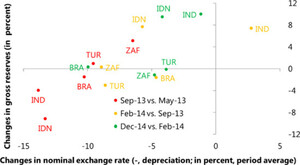 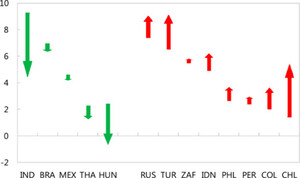 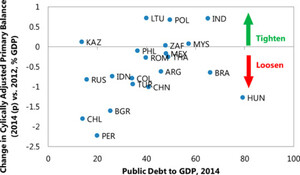