This chapter estimates the short- and long-run price and income elasticity of Indian exports, and investigates the role of structural rigidities in shaping Indian goods exports. In this analysis we use disaggregated export volume data for 45 Indian industries over the period 1999–2013, as well as industry-specific international relative prices. To distinguish between short-term and long-run estimates, we adopt the traditional Panel ARDL (Auto-Regressive Distributed Lag) approach. Our results indicate that while Indian exports respond positively to international relative-price fluctuations in the short-run and export price competitiveness in the long-run, binding supply-side constraints (notably energy shortages) dampen price responsiveness in the short-term. Labor market rigidities affect Indian export performance over the long-term. This underscores the importance of exchange rate flexibility as a shock absorber, including in responding to external demand shocks, as well as policies to alleviate supply-side bottlenecks in the economy.

1. The growth of India’s merchandise exports has decelerated significantly since 2011. India’s goods exports grew on average by over 20 percent per year during 2000–2011, albeit dipping temporarily in the aftermath of the Global Financial Crisis, but have remained essentially flat since 2011. Global factors have certainly hurt India’s exports, as did the appreciation of the real effective exchange rate. Moreover, binding supply-side bottlenecks have been another reason for India’s sluggish export performance. This chapter empirically investigates the role of above factors in shaping India’s export performance.

2. The first part of this chapter examines the responsiveness of Indian exports to international relative prices and external demand. We estimate the short-run and long-run income and price elasticity of export demand using the Panel ARDL approach, where the long-run effects are calculated from OLS estimates of the short-run coefficients in the following equation:

In a series of papers, Pesaran and Smith (1995), Pesaran (1997), and Pesaran and Shin (1999) show that the traditional ARDL approach can be used for long-run analysis, and that the ARDL methodology is valid regardless of whether the regressors are exogenous or endogenous, and irrespective of whether the underlying variables are I(0) or I(1).2 These features of the ARDL approach are appealing as reverse causality could be very important in our empirical application. Our panel ARDL specification also allows for a significant degree of cross-industry heterogeneity and accounts for the fact that the impact of international relative prices and world demand on export performance could vary across industries (that is, short-run slope coefficients differ). The long-run coefficients in equation (2), however, are estimated by the pooled mean group estimator. The lag order of ARDL is chosen to be one.

3. We collect data on India’s industry-level export volumes over the last fifteen years and take into account the role of sector-specific price competitiveness and global demand. The export volumes and price indices are from the Reserve Bank of India (45 groups at 2-digit SITC Rev.3 classification covering over 90 percent of Indian goods exports) and global import demand indices at a similar trade classification detail are constructed from the UN COMTRADE database. Sectoral energy intensity rates are calculated from India-KLEMS Project database, and the labor regulation index is obtained from the Fraser Institute’s Economic Freedom of the World Reports.

4. The panel data regression estimates, described above, suggest that Indian exports are responsive to relative price levels in the long-run and their fluctuations in the short-term. Column 1 of Table 1 summarizes the baseline findings from estimation of equation (1). The results indicate that, in the long-run, a one-percent increase in India’s international relative export prices could reduce export volume growth by about 0.2 percent. The long-run coefficient on global demand is estimated to be slightly above one and is statistically significant, which suggests that India’s exports move on par with global demand. Moreover, short term coefficients on global demand and relative prices have the expected signs and are statistically significant. Specifically, India’s exports will increase by about ¼ of one percent in the short term in response to a one percentage point rise in global demand. Notably, export performance is also affected by short-term fluctuations in international relative prices, with an estimated elasticity of −0.35.

5. The second part of this chapter investigates the role of structural rigidities in shaping the export demand relationship in India across a range of different industries. To capture the effects of structural rigidities on industries’ export performance in the short-term, we construct an indicator of supply bottlenecks pertaining to the availability of energy, and interact it with the change in international relative prices in equation (1). This is motivated by the fact that energy shortages could result in uncompetitive costs of production (partly through reducing the responsiveness of exports to relative price fluctuations) and lower India’s exports. Given the long-term nature of labor market rigidities, we include a labor-market regulations index in the long-run relationship only and set the coefficients on short-term fluctuations to zero.

6. The results show that energy shortages have reduced the responsiveness of Indian exports to shifts in relative prices in the short-term, while labor-market rigidities are an important determinant of export performance in the long run. Specification 2 of Table 1 contrasts the results of the “baseline” regression with an “augmented” one that contains an interaction term involving the product of changes in international relative prices and the proxy for sector-specific energy shortages. This interactive term is statistically significant and has the expected sign, indicating that energy shortages exacerbate the negative impact of unfavorable relative price movements on India’s exports. Finally, the specification 3 stresses the role of labor market flexibility in fostering merchandise export performance in the long term. Interestingly, the inclusion of this indicator renders the coefficient on relative prices statistically insignificant, likely suggesting the importance of enhancing labor market flexibility in the long-run to promote exports rather than just relying on price-based measures of competitiveness.

7. Our results underscore the importance of exchange rate flexibility as a shock absorber, as well as structural reforms to ease supply-side bottlenecks in the economy. Greater international relative price competitiveness of Indian exports, including from nominal exchange rate depreciation, can increase exports in the short run. In addition, continued progress on alleviating supply side bottlenecks, in the energy sector in particular, would help enhance the effectiveness of exchange rate flexibility in lessening impact of adverse external shocks. Policies to improve labor market flexibility can help enhance India’s exports in the long run. 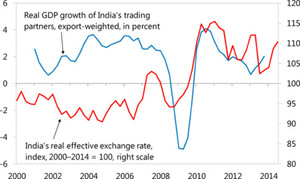