A New Fiscal Rule for India?1

India’s public finances continue to be a concern and reining in fiscal deficits is a key policy priority. This chapter reviews India’s experience with fiscal rules and suggests considerations in designing successor fiscal frameworks.

2. To offset the effect of the global financial crisis on the economy, the FRBMA was placed in abeyance in 2008 to allow for countercyclical fiscal support. Such support included discretionary fiscal stimulus (of around 3 percent of GDP) as well as full operation of automatic stabilizers in the form of the slowdown in revenues due to the deep crisis. The FRBMA targets were set in terms of budget balance rules and did not have the flexibility to allow for such countercyclical policy response. Subsequently, in 2013, the authorities modified the FRBM implementation rules to re-establish a deficit reduction path aiming to achieve the original medium-term target of 3 percent of GDP (authorities’ definition, which treats proceeds from sales of assets as revenues) by 2016/17, rather than the original deadline of 2008/09.2

3. This chapter is organized as follows. The next section describes international experiences with fiscal rules. The following section outlines the main features of the FRBMA and provides an assessment, followed by a discussion on possible modifications in a successor arrangement. As Wyplosz (2012) notes, while fiscal rules like FRBMA are neither necessary nor sufficient to achieve fiscal discipline, evidence suggests that “they can and do help.” One promising option is to introduce a more flexible budget balance rule, accompanied by a nominal expenditure growth limit to introduce a degree of countercyclicality. A fiscal council would also add credibility to countries’ budget processes by depoliticizing macroeconomic forecasts.

4. Fiscal rules have been put in place in a number of countries to anchor medium-term fiscal policy and strengthen public finances. A fiscal rule is defined as a permanent constraint on fiscal policy through simple numerical limits on budgetary aggregates (Kopits and Symansky 1998). They are formulated in a number of ways, with the main objective to promote fiscal sustainability, including: budget balance rules which can be defined on the overall balance or the structural balance; debt rules which set a target for public debt specifically; expenditure rules; and revenue rules (IMF 2009).

5. Different fiscal rules trade off the extent of debt stabilization with the degree of countercyclical flexibility afforded. Rules anchored on a target formulated in structural or cyclically-adjusted terms offer the most room for countercyclical fiscal policy in response to economic shocks. Many advanced economies with fiscal rules define them over the cycle. Expenditure rules allow some room for countercyclical policy as revenues are not included in the target and can respond freely to the economic cycle. They are thought to be easier to monitor, and their countercyclical features are more implementable in cases, like in many Emerging Market and Developing Economies (EMDEs), where it is difficult to identify the economic cycle (Cordes et al. 2014). On the other hand, debt rules place more emphasis on reaching an explicit debt target, with little room for countercyclical policy response. The appropriateness of different rules depends on the specific characteristics of a particular economy, such as the extent of public indebtedness, openness, vulnerability to shocks, population aging among other considerations.

6. Recent IMF research suggests that there is increased international reliance on fiscal rules, particularly to restore fiscal space used up by crisis-related stimulus plans. Analysis based on a new database of 80 countries suggests that the use of fiscal rules has proliferated. The number of rules has surged from around 5 in 1990 to 76 by 2012 (Schaechter et al. 2012). Many countries also combine different rules to achieve multiple objectives. The use of fiscal rules has been empirically associated with improved fiscal performance, including stronger cyclically-adjusted primary balances.

7. Fiscal rules have evolved over time to encompass multiple desirable objectives. IMF studies also find that the “next-generation” fiscal rules have become increasingly complex as they combine the objectives of fiscal sustainability with the need for flexibility in policy response to economic shocks. These multiple objectives thereby create new challenges for implementation, communication, and monitoring (Schaechter et al. 2012). As a result, these rules are often accompanied by institutional arrangements such as fiscal councils.

Assessment of the Indian Experience

8. India adopted the FRBMA in 2003 in response to high and increasing public debt and persistently-large deficits. The Act required the government to commit to multi-year fiscal targets, as well as report and publish deficit outcomes (which has been done). The government is required to make public a Medium-Term Fiscal Policy Statement, a Fiscal Policy Strategy Statement, and a Macroeconomic Framework Statement. These documents are meant to improve transparency and ensure the consistency of current and capital budget allocations by publishing rolling 3-year plans, though their effectiveness has been questioned (IMF 2014).

9. The FRBMA specified targets for various formulations of the budget deficit and implementation were initiated in the 2004/05 Budget. Numerical rules were as follows:

10. Implementation of the FRBMA was followed by a sustained decline in the fiscal deficit. The central government fiscal deficit declined to 3.1 percent of GDP in 2007/08 from 3.9 percent of GDP in 2004/05. About two thirds of the improvement in the central government deficit position stemmed from stronger revenues driven by rapid economic growth as well as better tax administration. The remainder of the fiscal adjustment came from declining interest payments as government debt levels began to fall (Simone and Topalova 2009).

11. However, the FRBMA was put in abeyance at the onset of the 2008 global financial crisis as it did not provide room for countercyclical fiscal policy. The FRBMA allowed breaches of the targets on exceptional grounds as specified by the central government, but it did not have built-in flexibility. Nor was the approach to corrective actions carefully spelled out. In the event, the deficit widened from 3.1 percent in 2007/08 to 7.8 percent of GDP in 2008/09 due to discretionary stimulus as well as a sharp deceleration of tax revenues in the aftermath of the crisis.

12. Since then, fiscal space has not been rebuilt fully as the 2009 stimulus has been only partially unwound. Also, costly welfare schemes, in particular the expansion of the Mahatma Gandhi National Rural Employment Guarantee Act (MGNREGA) and the introduction of food subsidies (associated with the Food Security Act of 2013) has meant that fiscal consolidation has been slow. The fiscal impulse has been only slightly negative in the years following the 2008 crisis.

13. In 2012/13 the authorities re-established a fiscal adjustment path under amendments to the implementation rules for FRBM. The amended rules reset the deadline for reaching a 3 percent of GDP central government deficit at end-2016/17, and called for a more rapid reduction in the deficit than was required by the original FRBMA.4 Upon taking office in June 2014, the newly-elected government reaffirmed this adjustment path by specifying deficit targets of 4.1 percent for 2014/15, 3.6 percent for 2015/16, and 3.0 percent for 2016/17.

Proposal for a Successor Fiscal Rule

14. As fiscal consolidation remains an important priority, potential further policy changes can strengthen the fiscal framework. These include the adoption of a more flexible fiscal rule that can anchor macroeconomic policies, and comprehensive tax reform (including the early implementation of the goods and services Tax) which can help secure additional revenues to finance productivity-enhancing and social expenditure. This section will focus on possible modifications to the existing fiscal rule which can reduce procyclicality in fiscal policy and help build fiscal buffers during favorable cyclical positions (Bova et al. 2014). In addition to modifications enhancing flexibility, any strengthened fiscal rule should have incentives to prevent fiscal slippages, including enhanced accountability (IMF 2014).

15. The previous fiscal target—the overall fiscal balance—did not offer sufficient flexibility to deal with shocks and led to procylicality. It also included imprecisely-defined escape clauses and limited accountability in the event of missed targets. In many instances over the implementation period of the FRBMA, fiscal policy was procyclical. One option is to adopt a structural balance rule to offset procyclicality and leave room to respond to economic shocks. Concerns about procyclicality have led other countries to specify targets that include adjustments for the cyclical position of the economy. At the same time, despite its merits, introducing a structural balance rule would also raise a number of implementation (technical and procedural) and communication challenges.5 For example, estimation of the output gap in India, as in many EMDEs, has become difficult, with misidentification of the size and sign of the gap implying a potential policy mistake under a structural balance rule.

17. In addition to increased flexibility in the targeted balance, a strengthened framework should be supported by other features to enhance credibility and accountability. These include increased transparency, fiscal councils, enforceability and sanctions for non-compliance, and narrower escape clauses. Specifically:

Indian fiscal definitions differ from international standards, though mapping from one to the other is possible. The “revenue” deficit concept essentially refers to recurrent revenue minus recurrent spending.

Tapsoba (2014) simulates a DSGE model for India in which fiscal policy is anchored on a structural fiscal balance rule. 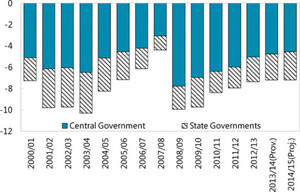