El Niño Weather Shocks and Their Impact on India1

This chapter employs a dynamic multi-country framework to analyze the macroeconomic transmission of El Niño weather shocks to India. The results show that India faces a short-lived fall in economic activity, as well as a moderate inflationary pressure, as a consequence of an El Niño shock.

1. According to the Australian Bureau of Meteorology, there is a 70 percent chance of an El Niño weather event developing in the first quarter of 2015 (Figure 1). El Niño is a band of above-average ocean surface temperatures that periodically (every 3–7 years) develops off the Pacific coast of South America, lasts about two years, and causes major climatological change around the world (Figure 2). El Niño conditions usually coincide with a period of weak monsoon and rising temperatures in India, which adversely affects India’s agricultural sector and increases domestic food prices.2

2. This chapter analyzes the macroeconomic transmission of El Niño weather shocks to India in a dynamic multi-country framework—taking into account the economic interlinkages and spillovers that exist between different regions, and controlling for macroeconomic determinants of energy and non-fuel commodities. It models El Niño as a causal variable and conducts structural impulse response analysis in response to a fully-identified weather shock3 and for a range of macroeconomic variables (including real output, inflation, real oil and non-fuel commodity prices).

3. A dynamic multi-country approach is used for the analysis of the international transmission of El Niño shocks—based on the global VAR (GVAR) model of Cashin et al. (2014).4 The framework comprises 21 region-specific models (among which is a European region). These individual models are solved in a global setting where core macroeconomic variables of each economy are related to corresponding foreign variables (constructed exclusively to capture each country’s bilateral trade structure). The model has real and financial variables: real GDP, inflation, the real equity price, the real exchange rate, short and long-term interest rates, commodity prices, and a measure of El Niño intensity. All data are quarterly in frequency, for the period 1979Q2 to 2013Q1.

4. Economic growth in India is moderately affected by El Niño weather events. Such an extreme weather condition can constrain the supply of rain-driven agricultural commodities; and reduce agricultural output, construction, and services activities. Results from the Global VAR model indicate that India’s GDP growth would fall by 0.2% after the first quarter following an El Niño shock. The declining share of agricultural output in Indian GDP over time acts as a mitigating factor—the share of India’s primary sector in GDP was 28% in 1997 and has dropped to 20% in 2013. The increase in the contribution of Rabi crops (sown in winter and harvested in the spring) and the decline in the contribution of Kharif crops (sown in the rainy monsoon season) over the past few decades is another mitigating factor, as sowing of Rabi crops is not “directly” affected by the monsoon. Moreover, due to more developed agricultural markets and policies, rising agriculture yield, and climatological early warning systems, farmers are better able to switch to more drought-resistant and short-duration crops (with government assistance).

5. The El Niño weather phenomenon can significantly affect global commodity prices. The higher temperatures and droughts following an El Niño event, particularly in Asia and Pacific countries, not only increases the prices of non-fuel commodities (by 5¼ percent after four quarters), but also leads to higher demand for coal and crude oil as lower output is generated from both thermal power plants and hydroelectric dams, thereby driving their prices up. For example, El Niño causes hot and dry summers in southeast Australia; increases the frequency and severity of bush fires; reduces wheat exports, and as a result drives up global wheat prices. El Niño-induced drought in Indonesia pushes up world prices for coffee, cocoa, and palm oil. Furthermore, mining equipment in Indonesia relies heavily on hydropower; with deficient rain and low river currents, less nickel (which is used to strengthen steel) can be produced by the world’s top exporter of nickel, pushing up global metal prices.

6. Accordingly, an inflation “jump” is observed in India (60 basis points after three quarters), following an El Niño weather event. This is due to a high weight placed on food in the CPI basket of India (47.6 percent). Note that production of perishables (i.e. fruits and vegetables) in India is affected less by monsoon than food grains, while the prices of fruits and vegetables are relatively more volatile. Moreover, inflation in food grains has historically been affected by government procurement policies and administered minimum support prices in agriculture. During the last decade, inflation increased sharply after the 2009 drought in India, however, in the previous episodes of drought in 2002 and 2004, inflation remained subdued. In 2009, drought conditions were accompanied by a steep increase in minimum support prices, resulting in high food grain inflation and consequently higher CPI inflation.5 Overall, government food policies, alternate monetary regimes, water reservoir levels, and excess food grain stocks could somewhat offset the inflationary impact on India of El Niño shocks.

7. Given these findings, macroeconomic policy formulation in India should take into consideration the likelihood and effects of El Niño episodes. The sensitivity of growth, inflation, and commodity prices to El Niño developments raises the question of which policies and institutions would help ameliorate the adverse effects of such shocks. These measures could include changes in the cropping pattern and input use (e.g. seeds of quicker-maturing crop varieties), rainwater conservation, judicious release of food grain stocks, and changes in imports policies/quantities. These measures would all help to bolster agricultural production in low-rainfall El Niño years. On the macroeconomic policy side, any uptick in inflation arising from El Niño shocks should continue to be monitored closely, and the monetary policy stance adapted as necessary to avoid the emergence of second-round inflation effects, and to help anchor inflation expectations.

It should be noted that an El Niño year has not always resulted in weak monsoons in India. Since 1980 there have been nine El Niño events, and only six drought situations experienced in India.

See Chudik and Pesaran (2014) for a survey on theory and practice of GVAR modeling. 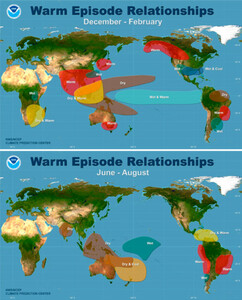