This statement provides information that has become available since the issuance of the Staff Report. The information does not alter the thrust of the staff appraisal.

1. Albania’s Parliament appointed a new Governor of the Bank of Albania (BoA) on February 5. Mr. Gent Sejko secured broad cross-party support in parliament for his nomination.

3. The latest financial soundness data indicate that nonperforming loans have declined from 25 percent in September to just under 23 percent in December 2014. The decline in the NPL ratio appears to be driven by a broad-based reduction in banks’ NPL portfolios, as well as a pick-up in credit growth. 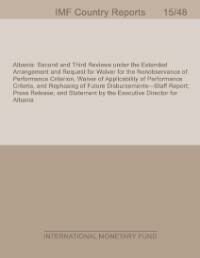