This Selected Issues paper analyzes the spillover effects of key external shocks on Paraguay. It presents an overview of Paraguay’s major economic and financial linkages with the rest world, and quantifies the spillover effects of key external factors on the Paraguayan economy, using a vector autoregression approach. The empirical results suggest that global shocks have a significant impact on Paraguay’s growth rate. The paper also highlights that output and exchange rate shocks stemming from Brazil and Argentina are also important, even after controlling for global factors.

This Selected Issues paper analyzes the spillover effects of key external shocks on Paraguay. It presents an overview of Paraguay’s major economic and financial linkages with the rest world, and quantifies the spillover effects of key external factors on the Paraguayan economy, using a vector autoregression approach. The empirical results suggest that global shocks have a significant impact on Paraguay’s growth rate. The paper also highlights that output and exchange rate shocks stemming from Brazil and Argentina are also important, even after controlling for global factors.

1. Paraguay’s credit markets have deepened substantially over the past decade. Following a sharp contraction during the banking crisis of the early 2000s, real credit to the private sector began to recover in the second half of the decade, growing at an average rate of 11 percent after 2004, well above the regional average for the same period. At the end of 2013, credit reached 45 percent of GDP, in line with the average for the region.

3. Since 2011, the government has adopted certain regulations to improve access to finance. These include the regulation of non-banking correspondents (2011), i.e., agents providing basic financial services; the creation of a basic savings account (2013) with reduced requirements and lower fees, in line with FSAP recommendations; and the regulation on e-money accounts (2014), establishing requirements that must be met by entities providing non-bank transfers and electronic money using telecommunication services. Other initiatives to expand credit access for SMEs and promote sharing of credit information have also been enacted.

4. To extend these advances, Paraguay launched the National Strategy for Financial Inclusion in 2014. The initiative was established with the goal to “reduce poverty ratios and promote higher living standards, consolidate a robust and stable financial system, and reduce the gap between supply and demand of financial products.” This strategy is part of the government’s objective of reducing the still-high incidence of poverty in the country.

5. The potential effect of financial deepening3 on growth and inequality has not yet been studied in the case of Paraguay. Building on a model developed by Dabla-Norris et al. (2014), this paper analyzes the macroeconomic effects of expanding financial services. The premise is that expanding the depth of financial markets increases growth by providing access to credit to financially constrained economic agents. To the extent that these changes favor the poor, financial development may also improve the income distribution and increase the efficiency of the capital allocation, boosting total factor productivity (TFP).

6. The paper is organized as follows. The next section describes the main financial frictions apparent in Paraguay. Section C includes a description of the model and a discussion of the results of the calibration for Paraguay, compared to those of other countries in the region. Finally, section D discusses the main policy implications.

B. Financial Constraints in Paraguay

7. The model focuses on three dimensions of financial deepening: reach, depth, and efficiency. The reach dimension (or access to credit) can be constrained by facts like physical distance to banks or ATMs and the documentation required for opening or maintaining an account or applying for a loan, which increases the cost of participating in the financial system. The depth dimension (or amount of credit) can be constrained by limited commitment, reflecting high default probabilities and poor contract enforceability, which will result in a high collateral requirement. Finally, efficiency relates to the fact that, due to asymmetric information, banks have to monitor their clients, which is costly. Limited competition can further increase inefficiencies, driving up the cost of intermediation.

8. Despite some recent improvements, access to financial services is still low in Paraguay. In the 2013 Financial Inclusion Survey, 24 percent of adults cited the lack of proper documentation as the main reason for not having an account. The cost and bureaucratic process involved in using financial services was the second most cited reason (19 percent). Only 4 percent mentioned physical distance to a financial service provider as a barrier.

9. Depth appears to be constrained by weaknesses in the legal framework and in enforcement. Paraguay scores only 2 (out of 12) in the Doing Business index for the strength of legal rights, which measures whether applicable collateral and bankruptcy laws include certain features that facilitate lending. Sound collateral laws enable businesses to use their assets as a security to obtain financing. The absence of a sound legal framework and poor contract enforcement constitute an important barrier for enterprises in obtaining credit.

10. Efficiency appears to be restricted by asymmetries of information. Biedermann et al. (2012) find that high information costs in the financial intermediation process and elevated operating costs were key factors behind the high interest rate margins in Paraguay. Limited competition may further contribute to the presence of high spreads. Ross and Garay (2014), in turn, report that the effective interest rate spreads for the banking system have been stable over the past decade, but conclude that the quality and sharing of credit information needs to be improved to reduce credit risk premiums. At present, there is one private credit bureau operating in Paraguay, alongside the BCP’s public credit registry. Although their coverage appears to compare favorably to the region (45.5 percent of the population for the private bureau and 22.8 percent for the public registry), the breadth of the data being covered and frequency of publication have limitations.4

11. The model used in this paper was developed by Dabla-Norris et.al (2014), to estimate the impact of financial deepening on growth and inequality. The micro-founded general equilibrium model has heterogeneous agents that are distinguished from each other by wealth and talent, and can choose to be either workers or entrepreneurs. Workers are paid the equilibrium wage, while entrepreneurs have access to a technology that uses capital and labor for production. In equilibrium, only talented individuals with a certain level of wealth choose to be entrepreneurs, while untalented individuals or those who are wealth-constrained choose to be workers.

12. The model has two regimes: one with credit (finance) and the other without (savings-only). As explained above, there are three dimensions of financial deepening: reach, depth, and efficiency. The first dimension relates to the fact that individuals need to pay a financial participation cost in order to move from the savings-only to the finance regime. The size of the participation cost determines the reach or inclusion of the financial markets. Second, individuals can obtain credit once they are in the finance regime, but borrowing is constrained by limited commitment, reflecting poor contract enforceability. This imposes credit rationing where entrepreneurs have to post collateral to borrow, and the size of collateral constrains the depth of the financial market. Third, there is asymmetric information between banks and borrowers, and taking the default possibility and monitoring costs into account, banks charge a higher interest rate for highly leveraged firms. As more productive and poorer agents are more likely to leverage more, the higher cost of intermediation can be a source of financial market inefficiency and inequality.

14. The model is calibrated using macroeconomic and firm-level data for Paraguay. The saving rate, interest rate spread, and ratio of nonperforming loans (NPL) are taken from the World Bank’s World Development Indicators (WDI) database. The average collateral ratio and share of firms with credit (broken down by firm size) comes from the Enterprise Survey of the World Bank. We use the results from two vintages (2006 and 2010) and compare them with other countries in the region.

15. Between 2006 and 2010, firm access to finance in Paraguay improved. The percentage of firms using credit to finance investments and/or working capital went up, while collateral requirements were reduced. In addition, the percentage of firms identifying access to finance as a major constraint declined, though mainly for large firms. Overall, the variables used in the model for Paraguay appear to be in line with other countries in the region.

16. A few other parameters are estimated by matching the simulated moments to actual data. The gross saving rate is matched to estimate the bequest rate, ω; the average value of collateral is used to calibrate the degree of financial friction resulting from limited commitment, λ; while the financial participation cost, Ψ, the intermediation cost, χ, the recovery rate, η the probability of failure, p, and the parameter for talent, ρ, are jointly estimated to match the moments of the percentage of firms with credit, NPL ratio, interest rate spread, and the employment share distribution. In the model, the share of firms with credit is endogenous and is affected by ψ, λ, and χ.

17. The results of the calibration suggest access to finance has increased in sync with a decline in asymmetric information problems, i.e., both ψ and χ are less of a constraint in 2010 compared to 2006. The next step is to analyze the economic implications of changes in the three dimensions of financial deepening:

18. The results for Paraguay are in line with those for other comparable economies. In terms of growth, relaxing the borrowing constraint and the participation cost have the largest impact. However, the latter has the largest effect on reducing inequality, but affects TFP negatively, implying a trade-off between inequality and productivity growth.

20. Lowering the costs and documentation requirements for opening accounts and obtaining loans is a promising element of this strategy. The results of this paper suggest that progress in this area can significantly improve growth and lower inequality. Reducing borrowing constraints—by having better information and contract enforcement—will also have a positive impact on growth, although the benefits have to be weighed carefully against the risk of exposing financially inexperienced borrowers to potential indebtedness problems. Finally, reducing intermediation costs could also increase growth while bringing down the relatively high interest rate spreads in the country.

21. While financial inclusion is analyzed here from the point of view of easing access to credit for firms, the concept goes well beyond that definition. Thus, it is important and indeed encouraging that Paraguay’s financial inclusion strategy pursues broader goals that also include financial education and wider access to financial services other than loans.

This paper uses the particular definition of financial deepening as wider access to credit at the firm level as a result of reduced financial frictions.

Adults who Saved at a Financial Institution in the Past Year

(In percent of population age 15 and above) 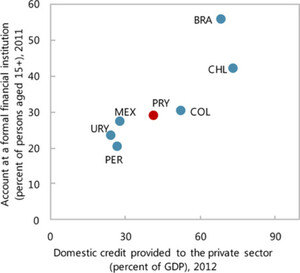 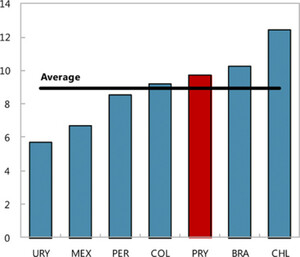 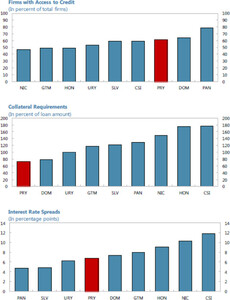 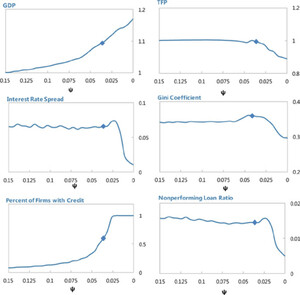 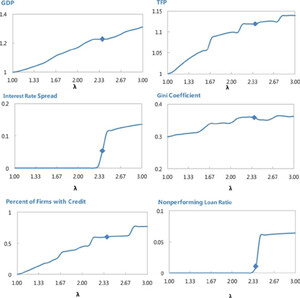 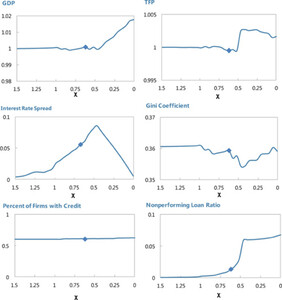