IV. The Central Bank Net’s Worth1

This note presents forecasts of the balance sheet of the Central Bank of Costa Rica (BCCR) under several scenarios: the simulations help forecast the quasi-fiscal deficit, and assess if the net worth will tend to improve or not. A persistent deterioration of the balance sheet could put at risk the inflation objectives of the central bank, in particular when public finances are under stress. Alternative scenarios are built by changing the most important assumptions included in the forecast, namely, GDP growth, base money growth, accumulation of foreign reserves, and interest rates.

1. The purpose of this note is twofold: first, it covers the relevant task of forecasting the quasi-fiscal deficit of the Central Bank of Costa Rica; second, it analyzes the balance sheet to determine whether its structure fosters a growing net worth in the longer term or not.

2. The BCCR has a negative net worth and a persistent deficit. At end-2013, the balance sheet of BCCR shows a negative net worth of around 7.4 percent of GDP and a deficit of near 0.8 percent of GDP. This deficit is part of the fiscal position of the consolidated public sector and, in general, of the assessment of the sustainability of the fiscal sector. The deficit of the BCCR has persisted for years mostly as a result of past crises and quasi-fiscal activities, and in recent years as a result of the sterilization cost of the accumulation of foreign reserves.2

3. Central banks do not go bankrupt but a large and increasing deficit could jeopardize price stability. Central banks do not go bankrupt because they have the ability to print money to pay their debts. However, a large and increasing deficit could lead the central bank to abandon its inflation goals and generate inflation as a way of financing itself and reduce the real value of its debt.3 This scenario is even more likely in an economy where government finances are also under stress (fiscal dominance) and recapitalization of the central bank by the government is not possible. In other words, an undercapitalized central bank has incentives that contradict its main objective, which is to keep prices under control. Capitalizing the central bank strengthens its credibility and its autonomy. Indeed a capitalized central can make policy decisions focusing only on inflation, disregarding any effect they will have on its balance sheet (Buiter, 2007; Sims, 2006).

4. The balance sheet is modeled using open market operations (OMAs), which are done with Monetary Stabilization Bonds (BEM), as the residual variable, so that any deficit is financed by issuing debt. The amount of BEM issued depends on the flow of assets, (foreign reserves and credit), liabilities different from OMAs (money, foreign debt, and other liabilities), as well as on revenue and expenditures different from interest payments on OMAs. The payment of interest on OMAs is determined simultaneously with the flow of OMAs. Flow and stock accounting identities are respected (see Box 1).

5. As a key pre-requisite of our analysis, two money demand equations were estimated, both confirming that the elasticity of real money balances to real GDP is way below 1. Vector error correction models were estimated using real money balances (M1/CPI), real GDP, and the nominal interest rate, as the opportunity cost of holding money.4 The results show that the elasticity of money to GDP is 0.45 and 0.62. The higher elasticity was obtained with the estimation of a VEC using the log of (i/1+i) instead of the interest rate directly (Table).5

6. The simulation baseline scenario indicates that the net worth of the BCCR will most likely remain negative for many years but will eventually improve (Figure). In particular, results show that the net worth will stay near -6.5 percent of GDP until 2018, after which it will start to improve. Even though most central banks have the ability to generate sizable income through seigniorage, the BCCR revenues stagnated, as in many emerging economies. Indeed, revenues have been lower owing to: i) the lower interest rates earned on foreign reserves; and ii) paradoxically, the success in lowering inflation, since it hurt the collection of the inflation tax (Muñoz, 2012). At the same time, interest expenses increased because the central bank issued its own debt (Monetary Stabilization Bonds, BEM) to sterilize excess liquidity and compensate expansionary pressures from the accumulation of foreign reserves as well as to better control the interest rate.

7. Nevertheless, the long-term improvement of the net worth in the baseline scenario hinges on several crucial assumptions. The benchmark results show an eventual improvement of the balance sheet, which is conditional on the following assumptions: i) nominal base money grows at 0.62 times real GDP growth plus the inflation rate, as the estimated money demand indicates; 2) real GDP grows at the same rate as potential from 2016-2017 on; 3) the interest rates on BEMs increase with the normalization of monetary policy abroad as well as with local GDP growing again at potential; and 4) the ratio of foreign reserves to GDP stabilizes in around 14 percent in the long run (Table).

8. Our analysis indicates that some factors currently affecting negatively the balance sheet could persist for several years. Even though the return on foreign reserves should increase with the normalization of monetary policy in advanced economies, the overall effect on the balance sheet will be limited given that the interest rate paid on the central bank debt should do the same. Most importantly, the collection of seigniorage should continue being smaller than in the past, if the central bank continues to meet its inflation target, and if money demand grows at a lower rate (as the estimated models point out). Results show that, in the baseline scenario, the quasi-fiscal deficit could reach almost 0.9 percent of GDP in 2014 and 2015. According to the forecast, the deficit of the central bank will start declining substantially in 2018. Note that the core level of the net worth, i.e. excluding base money from the liabilities, is still positive in Costa Rica. In other words, the assets are enough to pay the liabilities other than base money, namely BEM and other obligations and thus, the central bank is solvent (Table above).6

9. Using alternative values for the main assumptions listed before, we found that the effect of most individual shocks on the BCCR net worth is limited, with the exception of some tail scenarios.7 Besides the baseline scenario, results were obtained using feasible high and low rates of growth of money and real GDP; high and low interest rates on BEM; and finally a higher ratio of foreign reserves to GDP. In most cases, the net worth starts improving persistently in 2018. The best scenarios are obtained with higher rates of GDP growth and base money growth. On the negative side, a scenario with interest rates on BEM increasing to 12 percent in the long run has a significant effect on the evolution of net worth. If money also grows slowly, as one would expect if interest rates are high then the negative effect would be larger. In the latter case, the net worth starts to deteriorate in 2015 to reach -7.2 in 2025. Therefore, low money growth and high interest rates on OMAS combined are enough to generate an increasingly negative path for the net worth. We also found that the maximum sustainable level of foreign reserves is 16.5 percent of GDP. Above that level, the net worth deteriorates persistently. Finally, a more explosive negative (tail) scenario was built by combining all bad realizations of the assumptions (Figure 1).

10. The net worth of the central bank might eventually tend to increase but the financial situation of the BCCR is yet fragile. A combination of bad shocks could take the net worth from its long-run growing trajectory. However, the core level of the net worth, excluding base money from the liabilities is still positive in Costa Rica. In other words, the central bank is solvent since assets are enough to pay the liabilities other that base money, namely BEM and other obligations. The quasi-fiscal deficit is sizable, of almost 0.9 percent of GDP in 2014–2015, and provides additional insight on the position of the consolidated government.

The balance sheet is modeled using OMAS (BEM) as the residual variable. Any deficit is financed issuing debt (BEM). Profits finance the growth of central bank capital. Thus, for capital not to fall as a ratio of GDP, profits should be large enough to keep capital growing at least at, (1 + g)(1 + π), the rate nominal GDP grows.

The following equation assumes that the real exchange rate is stable over the long run. Thus, the return on foreign reserves includes the international interest rate abroad and the exchange rate depreciation, which in this case is the difference between inflation rates: (1+ π)/(1+ π*):

After dividing by GDP and subtracting the effect of inflation on the value of capital π · K = π · (res − b − d) from both sides one finds:

The last equation shows that for capital to grow or at least remain stable, as a ratio of GDP, money growth1 should be enough to finance the accumulation of reserves, , part of the debt service, d · (rln – gln), and the non financial costs, nfc.

1 Which includes the inflation tax b · π plus money growth associated with real economic growth b · g,

As is well known, emerging economies pay high costs for the maintenance of their foreign reserves, given that those reserves are deposited in advanced economies earning less than the interest paid on the debt issued to finance the purchase of those reserves.

Kluch and Stella (2008) show that, in general, the performance of central banks regarding inflation is worse the lower the net worth of the central bank is. Ize (2006) shows that in central banks, lack of governance, lack of capital, and lack of independence usually go together.

This model can be derived from the optimization of a household, including money in the utility function. The log specification incorporates nonlinearities of the money demand.

In a flexible exchange rate regime, no asset backs money. It is pure flat currency and its value derives from the law and central bank credibility. Therefore, core capital excludes base money from liabilities because the central bank cannot be forced to give a real asset in exchange of currency.

Take into account that the shocks to the various assumptions in the sensitivity analysis are considered reasonable but are not comparable. 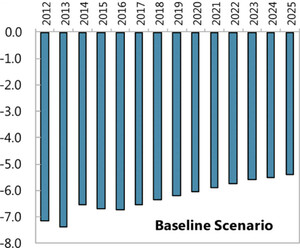 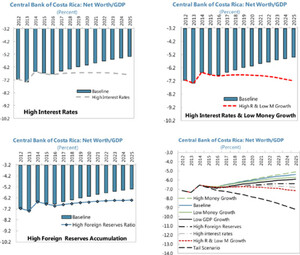