A. Population and Labor Force Dynamics

1. The Philippines’ favorable demographics can help raise GDP growth, but only if job creation keeps pace with the flow of labor force entrants. At just over 60 percent, the Philippines’ working age population (WAP) ratio is low owing to the sizable population share below 15 years of age. As a result, the WAP is expected to swell from the current 60 million to near 70 million in 2020, on the entry of 1.35 million new workers annually, up from the current 1.25 million. This so-called demographic dividend compares favorably with other young-population countries in Asia (Indonesia and India), and contrasts with workforce aging that is occurring or predicted in many countries in the region. However, generating sufficient domestic jobs to reduce the relatively high unemployment rate (7.0 percent in 2014:Q2) and poverty rate (41 percent of the population on the World Bank’s US$2 per day threshold in purchasing power terms in 2009) has already been challenging.

2. Keeping pace with the rapid increase in the WAP over the past decade was achieved in part through outward migration, despite solid employment growth. Employment in the Philippines expanded by nearly 40 percent during 2000–13, the third fastest pace within Emerging Asia. However, employment growth failed to translate into a higher employment rate or, equivalently, a lower unemployment rate due to the rapid increase in the WAP and labor force. The unemployment rate for new labor force (LF) entrants was a very high 25 percent in 2013, although down significantly from the 35 percent during 2008–09. Nonetheless, this outcome would have been considerably worse if the nearly one-third of the annual increase in the WAP had not taken up overseas foreign work (OFW).2 These young OFWs are part of the 1.8 million annual overseas deployment of Filipinos, of whom at least 400,000 are new hires.3 While the OFW profile is becoming more skilled, they are tending to accept less skilled jobs overseas in response to large wage differences and limited employment opportunities at home. This represents a significant brain drain for the Philippines.

3. The large increase in total employment since 2000 has been accompanied by sizable shifts in the sectoral composition of employment. The employment share of agriculture has shrunk from 60 percent in 2001 to 30 percent in Q1:2014, and is now the same size as informal services. Employment in formal sector services (encompassing retail and wholesale trade, business process outsourcing, tourism, among others) has risen to more than 20 percent. Meanwhile the employment share of manufacturing has moderated to below 10 percent, while that of other industry (including construction) has risen to a similar level.

4. Over the past decade, employment has consistently grown more slowly than real GDP. The employment intensity of growth was particularly low in 2013. Low responsiveness of employment to GDP growth is apparent in all major sectors of the economy, but especially prevalent in manufacturing and other industry. This suggests that economic activity is becoming more capital intensive over time.

5. Since 2008, the increase in employment has been sourced primarily by hiring temporary workers, rather than permanent employees.4 Currently, one third of employed persons is under a temporary work contract, a 17 percent increase in 2012 alone, while the number of permanent employees is declining. Companies are likely shifting to contract workers to bypass rigid labor regulation. Specifically, a temporary worker is required to be converted to permanent status on the expiration of his six-month employment contract, at which time the employer is required to bear the cost of hiring and termination. As a result, many employers are instituting temporary 5-month employment contracts and extending hours worked by permanent employees. While temporary work contracts are a second-best solution to overcome the high cost of permanent employment, the very short tenure is likely to discourage on-the-job training and result in higher search costs for employers and employees. On a more positive note, however, the vulnerable share of employment—defined as self employed and unpaid family workers, has moderated since 2000, but remains above 40 percent of total employment.

No data available for 2014 average daily wage and labor productivity.

Vulnerable employment is defined as sum of self-employed and unpaid family workers as a percentage of total employment (Philippine definition).

No data available for 2014 average daily wage and labor productivity.

Vulnerable employment is defined as sum of self-employed and unpaid family workers as a percentage of total employment (Philippine definition).

6. Wage-related labor costs no longer appear to be a major impediment to employment. The Philippines has a longstanding centralized (regional) minimum wage bargaining framework between employees, employers and the government, which affects the pay scale across most sectors and regions. However, while the relatively high level of minimum wages in the past may have impeded manufacturing employment growth, international surveys no longer identify labor costs as the key constraint to labor-intensive manufacturing in the Philippines (JETRO, 2013). Moreover, wages elsewhere in Asia have been growing strongly, improving the Philippines’ relative competitiveness. Additionally, the Philippines piloted in 2012 a two-tier wage system consisting of a mandatory floor wage and a voluntary productivity-linked component. Nonetheless, other labor market regulations continue to be widely cited as an impediment to investment and employment.

Value reports the country’s score on each of the variables that compose the GCI, with 7 being the most desirable outcome.

How wages are generally set, 1 = by a centralized bargaining process and 7 = by each individual company.

Redunduncy Cost estimates the cost of advance notice requirements, severance payments, and penalties due when terminating a redundant worker, expressed in weekly wag

Measures if Senior management positions in a particular country is usually held by relatives or friends without regard to merit (1) or mostly held by professional managers chosen for their superior qualification (7).

Brain drain was split into two indicators, one of which is the capacity to attract talent. Measured from 1 to 7, 1 = not at all and 7= attracts the best and brightest from around the world.

Value reports the country’s score on each of the variables that compose the GCI, with 7 being the most desirable outcome.

How wages are generally set, 1 = by a centralized bargaining process and 7 = by each individual company.

Redunduncy Cost estimates the cost of advance notice requirements, severance payments, and penalties due when terminating a redundant worker, expressed in weekly wag

Measures if Senior management positions in a particular country is usually held by relatives or friends without regard to merit (1) or mostly held by professional managers chosen for their superior qualification (7).

Brain drain was split into two indicators, one of which is the capacity to attract talent. Measured from 1 to 7, 1 = not at all and 7= attracts the best and brightest from around the world.

7. Unemployment in the Philippines has hovered around 7–8 percent, which is elevated from a regional perspective. However, nearly half of those unemployed are aged between 15–24 years, and the youth unemployment rate stands around 50 percent. Unemployment is highest among those with higher educational attainment, particularly among the youth. This points to the existence of a significant skill mismatch. While on the one hand, enterprise surveys highlight shortages of qualified workers in export orientated sectors and large unfilled job vacancies including in tourism, a sizable proportion of college graduates and undergraduates remain unemployed. This may however reflect that students seek an education that equips them for foreign employment, rather than for the domestic job market given the very large income advantage from working overseas and the limited number of well-paid technical jobs in the Philippines.

9. In this section, we analyze empirically how several characteristics of the Philippines’ labor market compare with other countries.

Elasticity of Employment to GDP

10. An unbalanced panel dataset spanning 125 countries and the period 1980 to 2013 is used to estimate the long run response of employment growth to output growth. This elasticity is the complement to Okun’s “law.”5 For the Philippines, the elasticity is estimated at 0.48, while the global average is pegged at 0.5. Loungani (2014) reports a similar average elasticity for the world. This implies that in the long run, employment (in the Philippines, as elsewhere) grows at half the pace of real output.

11. However, Philippine employment growth has fallen short of this long-run tendency during 2012–13. As a result, at end-2013, actual employment was short 600,000 jobs relative to the predicted long-run level. These missing jobs represent 1.5 percent of total employment. As discussed earlier, recent slow growth in employment occurred alongside an increase in the average number of hours worked per person. Nonetheless, re-estimating the regression using hours worked still reveals a significant shortfall between 2011 to 2013 (see Appendix 1). These results suggest that output has become less employment intensive in recent years. A similar episode of missing jobs occurred around the time of the Asian financial crisis, but employment quickly recovered. The drop in the unemployment rate from 7.5 percent in early 2014 to 7 percent in Q2:2014 might indicate this recovery has begun.

12. Nonetheless, unemployment remains high on a persistent basis, suggesting that the employment intensity of output in the Philippines is relatively low. Several explanations have been offered in the literature for low employment rates, including a rapidly growing labor force, financial crisis, housing sector boom and bust cycles, trade openness, and rigid product and labor market policies (Bassanini and Duval (2006), Crivelli and others (2012), IMF (2010), and World Bank, (2012)).6 To assess the role of policies and institutions in explaining unemployment patterns, we follow the cross-country panel data approach of Bassanini and Duval (2006), but extend the analysis beyond OECD countries to emerging market and developing economies, which likely face additional jobs and growth challenges (see IMF, 2013).

13. A cross country panel data analysis suggests that unemployment is related to structural factors, including product diversification, FDI and external openness.7 As shown in the table, numerous structural factors and labor market characteristics are found to be associated with unemployment:

OFWs are not reported in the labor force survey. In 2012, almost 10.5 million Filipinos were working overseas under permanent or fixed-term contracts.

Temporary contract workers are those under short-term and seasonal contracts. It also includes unpaid family workers.

IMF (2010) undertakes a two-step procedure to explain the determinants of the dynamic employment elasticity and the forecast error from Okun’s “law” that is interpreted to reflect more episodic factors beyond changes in output. While the latter could be more closely linked to the “missing” jobs puzzle in the Philippines recently, the short time series of data and difficulty to distinguish between episodic events in EMs including the Philippines precludes such an approach.

Results are derived from a fixed effects panel of 110 ADs and EMs, estimated from 1980 to 2012 using annual data from IMF’s International Financial Statistics and Structural Reforms database and World Development Indicators.

An alternative specification of including total factor productivity instead of trend GDP growth as in Bassani and Duval (2006) give virtually identical results indicating that the trend is likely capturing TFP dynamics.

New Entrants to the Labor Force

GDP Versus Employment Growth by Sector

Employed Persons By Nature of Employment

Underemployment and Income Inequality in Emerging and Developing Countries

(In thousands of hours) 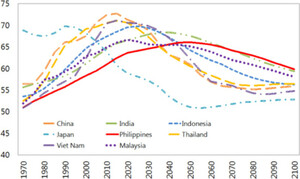 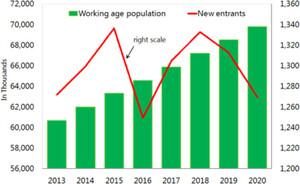 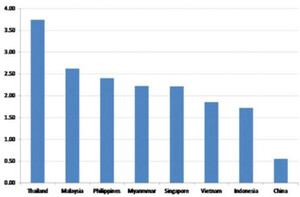 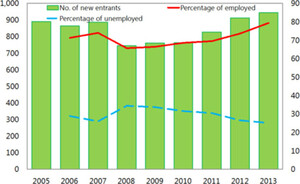 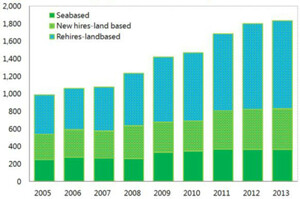 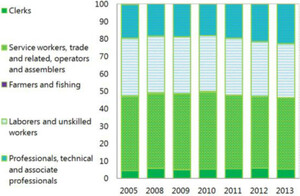 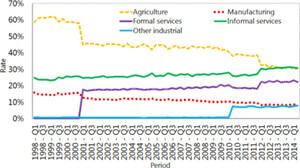 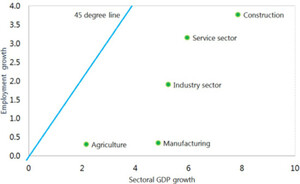 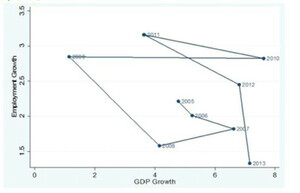 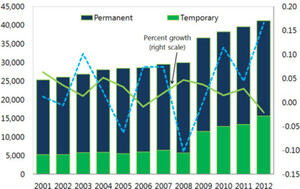 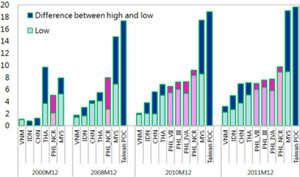 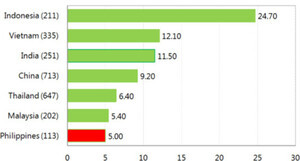 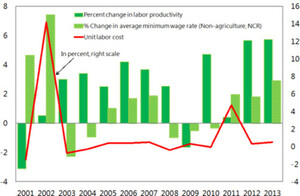 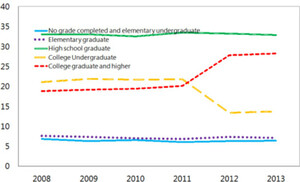 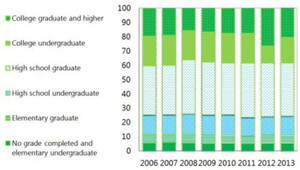 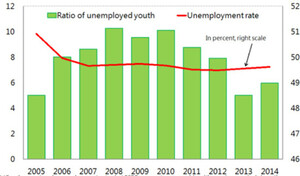 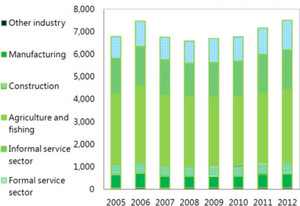 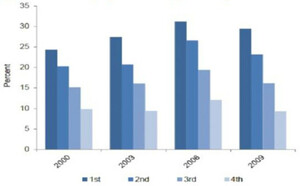 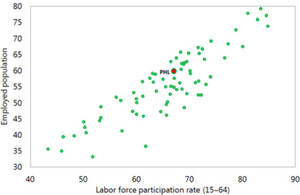 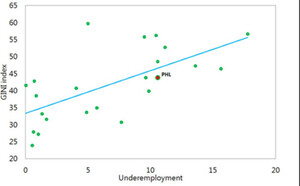 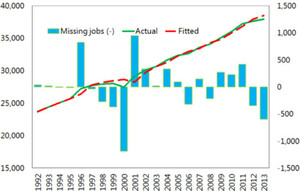 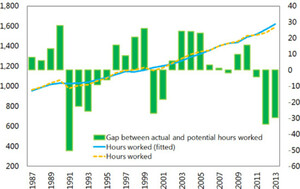