The UK is experiencing a rapid increase in house prices, particularly in London, and greater numbers of new mortgages with high loan-to-income ratios could represent risks to financial stability. Macroprudential policy is the first line of defense against those risks. Empirical evidence from a sample of advanced economies suggests that caps on debt-to-income (DTI) and on loan-to-value (LTV) ratios are potent tools to dampen mortgage credit growth and to mitigate financial stability risks. The effectiveness of these tools is enhanced when they are used simultaneously with additional macroprudential measures. In addition, countries tend to implement macroprudential policies gradually, possibly as a result of the uncertainty of the transmission mechanism of those policies.

1. High loan-to-income mortgages are rising in the UK, resulting in an increase in financial stability risks. Although mortgage lending is growing at a slow pace and financial risks have not materialized yet, the loan-to-income ratio of first-time buyers and of those households living in London have been increasing in the last 12 months. If this trend continues, banks’ and households’ balance sheets will become more vulnerable to income, interest rate, and house price shocks.

3. Macroprudential policies are becoming more common among advanced economies. Macroprudential policies are being used intensively in advanced economies, in particular since 2004.2 Caps on LTV/DTI ratios are the most common macroprudential measures used to address financial stability risks. Other measures, such as changes in the property taxes and risk weights (RW) of banks assets, have also gained popularity but are used less intensively than caps on LTV/DTI ratios (See Figure 2 and Appendix 2).

B. International Evidence on the Effectiveness of Macroprudential Policies

B. Case Studies of Macroprudential Policies in Advanced Economies.

10. Korea experienced pronounced housing cycles in the early 2000s. In the aftermath of the Asian crisis Korea experienced two major housing cycles. The first one in the 2001–05 period, and the second one during 2005–13. By 2002 house prices were growing at 18 percent in the country, and 32 percent in the prestigious Gangnam districts. Moreover, household credit was growing at an annual rate of 36 percent.

11. In response to high house price inflation in specific markets, government authorities introduced regional macroprudential measures in 2003. In response to house price inflation in the prime areas in Seoul, the government adopted macroprudential policies tailored specifically to “speculative zones”. A geographical area was designed a speculative zone, if the following criteria were satisfied:

12. Empirical evidence suggests that regional macroprudential policies were effective, but it required frequent adjustments. In May 2003 the authorities reduced the LTV threshold on mortgage loans with a maturity of less than three years from 60 to 50 percent. In October 2003 the LTV restrictions on mortgage loans with a maturity shorter than 10 years and properties located in speculative zones were reduced even further to 40 percent. After this measure was adopted, real house prices declined by 5 percent. In June 2005, once the house prices started increasing again, the government reduced the LTV to 40 percent on properties priced above 600 million won. Moreover, in August 2005 the government increased the capital gains tax for homeowner with three or more properties in the speculative zones. Data on house prices and mortgage credit indicate that these policies were effective at stabilizing the housing and mortgage market (Chang, 2010 and Miller, 2013). Furthermore, the policy was effective at curbing expectations on house price increases and discouraging speculative incentives (Igan and Kang, 2011).

Canada: The role of mortgage insurance and gradual implementation of macroprudential policies

13. Canada’s housing boom was a major risk to financial stability. House prices, residential mortgage credit, and consumer credit (including Home Equity Lines of Credit or HELOCs) all grew rapidly in the 2000s. Most indicators of house price valuation, such as the house price to income ratio and the house prices to rent ratio, increased sharply (IMF, 2014). Household debt as a share of disposable income rose from about 110 percent in 2000 to 165 percent in 2013. Mortgages and consumer loans secured by real estate (mostly HELOCs) are estimated to account for 80 percent of household debt and to represent the single largest exposure for Canadian banks (about 35 percent of their assets).

14. The Canadian authorities have exceptional power to affect housing finance through government-backed mortgage insurance. Specifically, the combination of the requirement that most lenders have insurance for high loan-to-value (LTV) mortgage loans and the central role of the government in providing such insurance gives the government great power to influence housing finance. In other words, the rules governing mortgage insurance are de facto important macroprudential tools. In addition, the authorities can also influence credit and house price growth through microprudential measures, such as prudential guidelines on mortgage lending, and structural measures, such as the oversight of the government-owned Canadian Mortgage and Housing Corporation (CMHC).

15. The tightening of mortgage insurance in Canada along with other macroprudential tools was most effective after several rounds of combined measures. Krznar and Morsink (2014) find that the initial macroprudential measures were not effective in limiting mortgage credit growth. However, after the implementation of three further rounds of mortgage insurance tightening (2010, 2011 and 2012) and successive increases in LTV and DTI caps, there was a slowdown in mortgage credit and house price growth.

New Zealand: The need of a comprehensive macroprudential toolkit

16. New Zealand adopted a macroprudential policy framework in 2013 to address systemic financial risks. New Zealand has a history of boom and bust cycles in the housing market. In the pre-crisis period, house prices were growing at double digits. By the end of 2012, house prices in New Zealand were growing at an annual rate of 7 percent while mortgage credit was expanding at 4 percent per year. The rate of mortgage credit growth appeared to be low compared to previous housing booms as a result of high debt repayments. However, new mortgage loans were growing in excess of 30 percent, similar to pre-crisis rates. In this context the Reserve Bank adopted a new macroprudential policy framework in May 2013 to deal with financial vulnerabilities arising in the housing market.

17. The macroprudential toolkit of the Reserve Bank of New Zealand included four instruments. The instruments were: (i) countercyclical capital buffer (CCB); (ii) sectoral capital requirements (SCR); (iii) adjustments to the minimum core funding ratio (CFR); and (iv) restrictions on high LTVs. The first two instruments are designed to build capital buffers against negative shocks. The third instrument builds resilience in the financial system against liquidity shocks by ensuring a stable source of funding. Only the fourth instrument, a cap on LTVs, has a more direct effect of reducing the risk of mortgage loans and the supply of credit.

18. In October 2013 the Reserve Bank imposed caps on the proportion of new loans with high LTV ratios. The Bank limited the share of high LTV loans (80 percent or higher) to 10 percent of the new mortgage lending.8 As opposed to outright LTV caps, a partial limit on LTV loans provides banks with some flexibility to manage the risk of their mortgage portfolio. In order to reduce incentives for regulatory arbitrage, the measure was announced to be temporary, and there was a commitment to remove the cap once the housing market stabilized.9

19. The cap on high LTV loans was effective at containing financial risks. As a result of implementing the cap on loan-to-value ratios, the share of high LTV loans declined from 25 percent of new mortgage lending in September 2013, to 5.6 percent at the end of March 2014. In addition, national house sales dropped by 23 percent between September 2013 and March 2014 across regions (RBNZ, 2014). Although the policy achieved the objective of reducing the risk exposure of banks, constant monitoring is required to prevent regulatory arbitrage. An assessment on the impact of this macroprudential policy is published twice a year in the Financial Stability Report.

20. The experience of macroprudential policies in other advanced economies provide three important policy lessons which could have implications for the UK:

22. The cap on high loan-to-income mortgages in the UK is a step in the right direction. The FPC has recently recommended a cap on mortgages with high loan-to-income ratios which is due to take effect from October 1, 2014. The new macroprudential policy measure states that no more than 15 percent of new mortgages could have a loan-to-income ratio of 4.5 or higher. As the experience in the Reserve Bank of New Zealand indicates, this new macroprudential tool could be extremely powerful at reducing the households’ leverage ratio. In addition, evidence from other advanced economies suggests that this macroprudential measure could be adjusted gradually over the business cycle.

We analyze a sample of 7 advanced economies: Australia, Canada, Hong Kong, Korea, New Zealand, Singapore, and Sweden. Many of these countries have important financial centers and their experience with macroprudential policies can provide valuable lessons for the UK.

The classification of macroprudential policy measures follows the work of Shim et al. (2013) and Krznar and Morsink (2014).

Caps on LTV ratios also have an important impact on credit growth, but they are not as effective as caps on DTI.

Data on house prices and mortgage credit was obtained from Haver Analytics for the 1997–2013 period.

New mortgage lending was defined for a window of six months.

However, there was no formal definition of stability in the housing market.

Impact of Macroprudential Tools on Mortgage Credit and House Prices 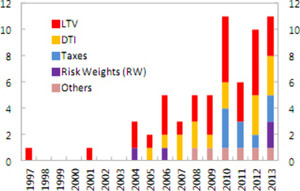